A evening on the big river

With the warmer weather in my neck of the woods, it’s time to rest the small streams so I decided to fish the BIG river, which I do fairly frequently and enjoy as much as the small streams.

Arrived on the river around 4:30PM and checked the water temperature. A nice cool 64 degrees. I had decided to fish a stretch of faster water that I had scoped out a couple of weeks ago. I arrived thinking I would fish the bomber in the heavier water but the fish were not interested. I saw some isonychia but again the fish were not showing any interest in them either. In fact, I didn't see more than a handful of rises all evening. I did see what I thought were a few rises in a shallow riffle which I took to be small salmon but I wanted to have at least a little fun so I decided to try the iso. A few fish tried to take it but as I suspected they were too small. I had seen a few caddis around so I switched up to an elk-hair caddis and bang a nice healthy rainbow took it out of the blue! Now the skunking was off. I ran the caddis through another riffle and I could see a brown's snout within inches of the fly but he eventually lost interest. 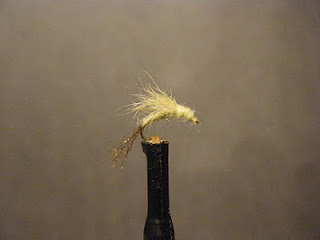 As the evening progressed there were small (18/20) yellowish green mayflies coming off that looked like sulfurs except for the greenish tinge in the body. I'm not exactly sure what they were but the fish were not rising to these either. I decided to try a snowshoe rabbit sulfur emerger I tie and ran it through the seams and riffles in the area. I took 3 more decent rainbows in the 12-14" range. In the tail of the run a nice brown took the emerger in classic form. You could see the fish rise and then slowly turn on the emerger with barely any nose out of the water or any splash and then descend until he felt the hook! I did manage to take a pic of this brown. Not sure if it is wild, survivor strain, or some other strain of stocked brown but it was beautiful. I managed one more brown on the emerger and then called it a night. All in all one of the better I've had this year not because of the number or size of the fish but more for the gorgeous night it was and the success despite no obviously rising fish. 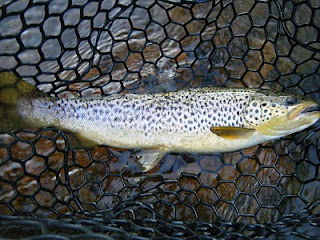 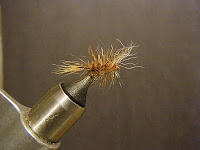 It's been raining over the past couple days so I've been doing
some tying. My favorite small stream fly is the Ausable bomber tied by Fran Betters. I've caught brook trout on this fly in NY, CT, and RI. I usually tie this one in a size 12. It always amazes me that even the smallest brook trout can inhale this monster. A friend gave me a tip that these also work on more educated trout and he was definitely right. I've taken some pretty educated brown and rainbow trout using the "bomber". Next up is Fran's other fly referred to as the "usual". Fran "usually" tied this one in a size 16. I haven't fished this pattern too much, but I have taken browns on it during an evening sulfur hatch late last month. 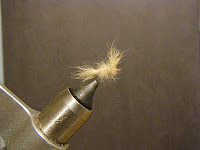 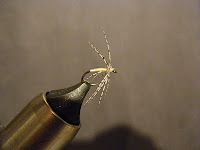 have caught their share during evening caddis activity earlier this year.

I managed to get out fishing in the Adirondacks twice last week. 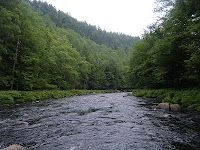 Last Sunday evening the weather was a muggy and warm 85 degrees when I headed out. I thought I would explore a larger river nearby that is stocked quite a bit downstream but I wasn't sure if this section of the river had any trout. I thought I would fish an Ausable bomber which the brookies love, with a BH flash back Hare's ear as a dropper. The first pool I came to I caught two smaller fall fish and I was wondering if there were any trout in this section of the river. A third cast into this pocket brought the frist brown trout of the evening. I continued to fish the bomber/hare's ear in the pockets upstream and managed a half a dozen nice browns. Half of the browns took the bomber and half on the hare's ear, some of all of which could have been wild.

After some heavy showers, the weather the rest of the week was cold

and damp with highs barely reaching 60 (great fishing weather). I decided to head to a small brook to do a little exploring a few days after the showers had moved through. When I arrived the water was quite high and most of the "pools" I usually fish in this brook were torrent of rushing water. Despite the higher water, fish were still interested in the bomber and I did catch several larger than usual brook trout. A few had bellies that were very red.This brook passes through some old growth forest which are quickly disappearing.
I did have a bit of an adventure as I was getting ready to hike back 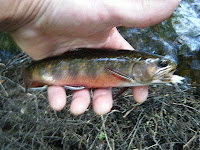 out. By this time, dusk was approaching and I noticed a darker form moving on the slope of the opposite bank of the brook. My first thought was a wolf as I quickly scanned the area for any sign of additional figures. I stayed put and watched. As the form moved closer I could see it was a black bear. Again I scanned for any sign of a cub or other bears. The bear kept moving towards me. I usually wear a camo shirt when fishing smaller streams and I don't think the bear saw me. The bear continued to move towards me, seemingly looking right at me. I didn't want this bear harassing me, thinking I 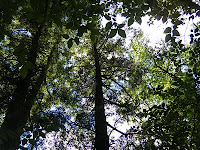 had fish so I decided to yell as loudly as I could at the bear. Fortunately for me, the bear quickly turned and ran away. As if one encounter with a bear wasn't enough, I jumped a second on the bushwhack back to the trail! All in all I had the complete Adirondack experience, wild fish, bears, raw weather "and loving it" (Maxwell Smart)