With all the snow we've been getting in New England and the cold temps, it's beginning to look like it will be a long time before I'll be fishing again.  Winters like this one keep the banks piled up with snow and the pools frozen over.  So I'm doing some tying and cleaning up the small stream fly box of the used and tattered.  I'm a minimalist so I like having just what is needed and nothing more when I fish.

When I first started fishing Adirondack brooks, I used to fish heavily hackled royal coachmen dries and small royal coachmen streamers.  Someone once told me the streamer looked like a "trude".  Sure enough when I looked up the royal trude I could see the resemblance.  This started me thinking about tying some royal trudes, that could be used both dry or wet.  Below are the classic royal coachmen and a "lime" version.   I use black thread, golden pheasant tippet for the tail, peacock herl for the the body with red or lime green floss, white calf tail for the wing and finish with brown hackle.  Brown hen hackle can be used to tie a wet fly version.

It's been a snowy winter so far in New England this year.  Last week's storm brought nearly two feet and it's been a little tough to find some time to tie in between all the shoveling.  I have been experimenting with my favorite dry fly for brookies - the Ausable bomber.   Here are three "bomber" variations with special thanks to Brk Trt for his recipe for the Royal Bomber.  I've started using 2XL dry fly hooks for these since Fran Betters prefered a long nymph hook for this pattern.  They aren't easy to find in the #12-16 sizes I wanted but I found some through Cabella's.  The Hare's ear bomber initially started as an all woodchuck bomber but the woodchuck dubbing was a bit too spikey so I switched to hare's ear.  Can't wait to try some of these out.  Next up, will be some royal trude variations. 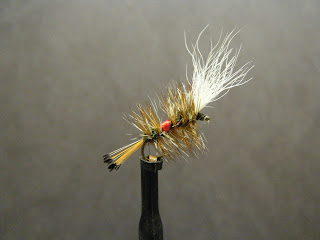 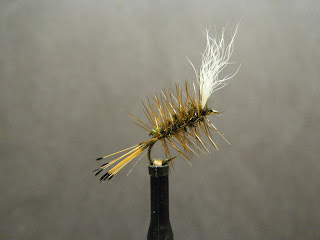 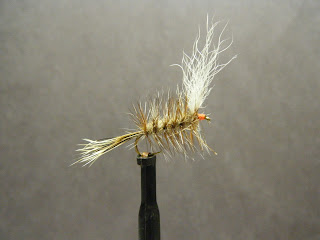 This is a handy little item you might want to consider carrying if you fish in bear country like I do.  The bell has a velcro attachment loop and a mesh bag with a magnet in the bottom to silence the bell when you don't need or want the jangle of the bell.  When I saw this item in a camping outlet store, I thought it was just the thing for carrying with me when fishing the Adirondacks as I have run into a few bears.  So if you don't want any close encounters of the Ursine kind, you might want to consider picking one up. 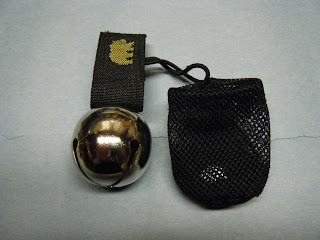