In case you haven't seen these craft organizers by Craftmate (Pop 'N Lock), these are a great ,compact way to organize your hook or bead supplies.  The design I like best is a single tray of 28 compartments with 7 rows of 4 lockable containers each.  Each row of 4 snaps into the tray for secure storage.  The compartments have a scooped shape for easily removing items.    The entire tray measures 11" x 5.5" with each comparement 1" x 1.5" (large enough for #6 2XL hooks).  Craftmate also makes a single row of 7 compartments for storing longer streamer hooks.  If you are in need of a better way to organize your hook or other small items you might consider picking some of these up.

I did finally manage to get out yesterday afternoon. It was a cool clear day with air temps in the upper 40's and the water a bit colder in the low to mid 40's.  There were a decent number of little black stoneflies on the water and a few rises.  I nymphed with a black pheasant tail soft hackle that I had tied earlier in the year for just such a day.  I managed three respectable browns on the pheasant tail.  I did fish a few spider patterns (little brown, and February red) with no success but did manage to break one off on a Stewart's black spider.  I fished mostly upstream with these which may not have been the best approach for stoneflies since I did notice they were skittering around a lot.  The black spider I let swing and little across when the fish smacked it.   Anyway it was nice to be out and feel the tug of the line again.
Posted by MarkW at 8:21 AM 6 comments:

What does Impressionism have to do with fly tying?

Lately, I’ve been fascinated with North Country spiders. Some anglers find that these flies are so sparse that they have little confidence that they will actually catch fish. In particular, since these flies do not strive to present an ideal imitation of a natural insect, there is an inherent reservation about their effectiveness in the minds of many modern fly fishermen. These reservations harken back to the “English school” of fly fishing in the 19th century that strove for accuracy in the imitation of the natural insect. In contrast, the “North country school” was coming from an opposite direction that spawned a somewhat cantankerous debate. The North Country perspective was articulated by T. E. Pritt, in his book North Country Flies published in 1885. He wrote ”It is far more difficult to imitate a perfect insect and to afterwards impart to it a semblance of life in or on the water, than it is to produce something which is sufficiently near a resemblance of an imperfectly developed insect, struggling to attain the surface of the stream. Trout undoubtedly take a hackled fly for the insect just rising from the pupa in a half-drowned state; and the opening and closing of the fibres of the feathers give it an appearance of vitality, which even the most dextrous fly-fisher will fail to impart to the winged imitation. “
﻿﻿What Pritt was expressing has a parallel to the movement in art between1870-1890 known as Impressionism. The impressionists were attempting to capture the essence of a subject rather than its details. Perhaps the best known of these works is Monet’s “Impression, Sunrise”. The impressionists were striving for an accurate depiction of light in its changing qualities and the inclusion of movement as crucial elements of human perception just as the North Country tiers were seeking to impart movement rather than detailed imitation.

The storied past of these creations has proven this hypothesis effective if not completely accurate (after all who knows why a trout really takes a fly?) So this season, I’ll be fishing these more often and hopefully learning more about these elegant flies. For those interested you can find digital copies of three of the classic works on the subject from http://www.archive.org/

So I've been very interested in North country spiders lately.  The other day I received a little package in the mail with English woodcock and grouse wings as well as a snipe skin to fuel my interest.  I'm some who loves old things, so the idea of tying and fishing these traditional patterns is very appealing.  I've also been following a few blogs from some anglers in the UK who tie and fish these traditional patterns.  I would recommend that you check out their blogs by referring to my blog list. 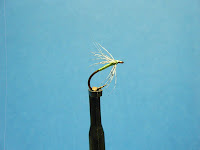 The other day, a question came up on one of those blogs about the Partridge and Green.  From the little bit of research that I've done it doesn't appear that the Partridge and Green was ever described by  Pritt or Edmonds and Lee in their works on Traditional North country flies.  Here is a nice link I found to some of the original dressings described http://www.wetfly.co.uk/.  The Partridge and Green is obviously a variation of the well known Partridge and Orange but I really don't know who first described it.  I've found that it is very effective when fish are rising to caddis and may imitate a green bodied caddis that is present in New England or perhaps the greenish egg sack of some species of caddis.  I tie it using grey partridge both with and without dubbing prepared by mixing cuttings from a Hare's mask and Pearsall's highlander green silk.  I've been experimenting a bit with lighting used in taking pictures to better reflect the true color of the flies.  The green silk used is a darker, deep green.