We all like to tell about our sucesses, a new stream filled with beautiful wild brookies that are literally launching themselves on your fly, or an evening on a larger river that has just come alive after a massive spinner fall but, we all know there are times when you have to put in the hard work of scoping out new water that turns out unproductive or the perfectly hatched plan that falls apart in the details.  This is one of those stories that I hope you will find amusing since we’ve all done something similar at some point.
Yesterday, my wife asked if I could take our daughter to her bass leason.  Sure I said, as I realized that the shop where she takes lessons is less than 5 minutes away from decent small run that I have caught fish in every time I’ve been there, always in the evening and always on a tan caddis.  So I’m thinking if I get everything rigged to go and drop her off at the lesson, I should have about 20 minutes to fish.  One fly, one run, couple of fish and back in time to pick her up was the plan.  So I dropped her off, no traffic and I’m at the spot in 3 minutes, tops.  Waders on, rod rigged with the caddis, nothing else needed.  After 20 minutes of casting and drifting, no fish were interested in playing – judging from the lack of bird activity I usually see in this spot, I was probably an hour too early.  Waders off, rod in the car and I was back at the shop before the lesson was over.  Too bad it  didn’t work out like it did in my mind but my plan had a part II!
Later than evening, I was coming home from the mid-week prayer meeting at church when part II was launched.   The rod was still rigged and everything was at the ready.  I have travelled over the same stretch of road on my way back and from church many times and have wondered whether the little brook we cross has any fish in it.  From the road, I could see some promising looking runs and some potential deep spots that were worth checking out but I never seemed to find the time to investigate.  Tonight would be different.   By the time I left prayer meeting there was about an hour left of light – plenty of time to try a couple of the promising looking spots to see if anybody was home.  When I reached the water’s edge, I realized this was probably a lost cause.  The water was not as deep as it appeared from the road and there was a lot of silt which covered the stream bead and banks most likely run-off from the home constrution that’s been going on in the area for a while.  At some time this stream may have been home to some small brook trout but not any more.  Atleast now I can stop wondering and check this one off the “to explore” list!
Nice plan, no fish but hey, that’s all part of the game.  To be perfectly honest, the scheming was the fun of the whole thing.  I managed to fish two spots in one evening and do the other things that are important to me as well.  So the next time you hatch a plan, go for it – who knows maybe it will play out as you imagine but if it doesn’t, don’t underestimate the fun of trying to pull it off!
Posted by MarkW at 12:24 PM 5 comments: 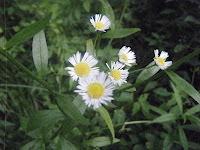 It’s been a rainy couple of weeks here in Southern New England.  It seems like we are in a cycle of rain every 3-4 days.  As soon as the rivers settle and clear, we get some more rain.   The upside is that the smaller brooks are staying well-fed and cool.  Yesterday, I wanted to get out for a couple of hours so I decided around 4PM to go to a small stream and see if I could find some wild brown and brook trout.  I enjoy being out in the woods in late afternoon toward early evening and yesterday was a lovely evening to be out.  The day was bright with the occassional dark cloud but no shower activity to speak of.  The woods were alive with bird song and the smell of the damp forest was especially pleasant.
As I worked my way downstream many trout slashed at the Ausable bomber and a few were brought to hand.  This trip I saw both brown and brook trout.  As dusk approached I had worked down into a section I had not explored before and found some nice deep depressions that I will have to return to explore further. 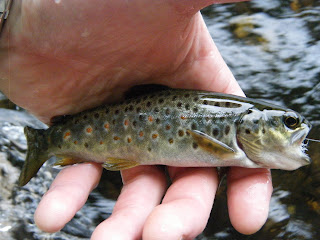 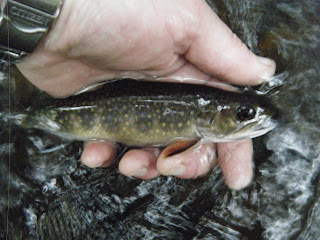 The last good looking spot yielded a sizeable rainbow.  This is the third wild trout stream this year from which I have caught a rainbow (two in CT and one in NY).  This particular fish was probably a stocked fish that had worked it’s way up into the headwaters based on it's size which was definitely over 12 inches.  I’m beginning to wonder if I’m observing a trend toward greater invasion of stocked rainbow trout into the headwaters of New England streams were native brook and wild brown trout exist.  I also wonder how this will affect the wild trout populations on these streams
Posted by MarkW at 9:44 AM 5 comments:

I had the pleasure of meeting Brk Trt of Small Stream Reflections last evening.  It was a beautiful evening to be outside with all the sights, sounds, and smells of a damp forest in early evening.  We met on a stream unfamiliar to me but well known to my gracious host. What made the evening especially enjoyable was sharing conversation along the stream, observing this experienced small stream fly fisherman adapt and use the stream to his advantage, and seeing a few gorgeous wild browns.
Posted by MarkW at 10:05 AM 1 comment:

Thought I would throw this out there and see what you think.  Pictured below is a "rock" I found fishing in western NY state.  It's about 5 inches in diameter and is unusual in it's near perfect roundness.  The rock is a grayish sandstone and the bottom is slighly concaved in contour.  It almost looks like a fossilized something or perphaps an Indian tool or artifact, neither would be out of the question for this region.  So what do you think ?
﻿﻿﻿﻿﻿﻿﻿﻿﻿﻿﻿﻿﻿﻿﻿﻿﻿﻿﻿

It's been a little while since I posted last and there is a reason for that.  The fishing has been pretty uneventful.  I headed out to a local stream early last week.  We hadn't had rain in almost two weeks and the stream was looking like it was early August rather than mid June.  There was no bug life to speak of and things were looking pretty dead.  I nymphed some deeper pockets with no interest.  After deciding this was an exercise in stupidity (doing the same thing over and over and expecting a different result), I opted to move to another section and do a little exploring.  When I arrived at least the birds were actively picking off bugs which was good sign.  I fished a couple of riffles and managed a small brown that poked his nose out of the water to take a tan caddis and another rainbow that shot 3-4 ft out of the water and threw the hook.  I will have to visit this section again and do a little more exploring.
I was planning to get out again later in the week.  Last thursday evening we had a front of very strong thunderstorms roll through dropping a ton of rain which meant the rivers were high and muddy.  Friday I visited another local stream that sometimes fishes well after a rain but it was very darkly stained (think cup of coffee) and I only managed a handful of chubs. I nymphed most of the day and forgot a previously learned lesson - fish streamers in high, stained water.

Windy day on the big river

Just a quick post today.  Went up to the big river yesterday.  Very tough conditions with winds out of the north 15-20mpk and gusts up to 30+.  The winds and cooler temps completely shut down any insect activity for most of the day although there were a ton of caddis coming off late but only a rise here or there.  The flows were up as well and the water was slightly off color so I decided to try out czech nymphing.  Someone had given me a leader and I tied a couple of anchor flies.  The cast was tough but I started to get better at lobbing all the weight.  I was pleased to hook a few and land a decent brown.  The takes are a whole lot easier to detect then with split shot and an indicator.  I've always hated nymphing but with a little more confidence in detecting the strikes and some practice with the lob, I may end up using this method more often.
Towards dark I did see a sulfur or two so I cast a snowshoe emerger over a snout I had seen poke out of the water twice and picked up another decent brown.  It is surprising how cold one can get this time of year on a windy cool night.  After the last fish and the shivering started, I figured I was done.   Not one of those great catching days but a little success with a new method definitely made the trip worthwhile.
I needed to wash the car today.  When I say there were a ton of caddis the front of the car was covered with them.  Too bad I didn't take a picture, it was quite a scene!
Posted by MarkW at 7:11 AM 1 comment: