What is it ? A Stromatolite

Just a quick follow up to a post from a couple of months back of an interesting object I found fishing for steelhead in western NY last fall.  I've had several people look at this object and someone actually had a pretty good idea of what it is.  It is a stromatolite, a fossilized remain of a colony of blue-green algae.  The algae produces a sticky biofilm that catches mud and silt that over time forms a thin layer.  Layer upon layer builds up forming these mounds that can appear in in a variety of shapes such as columns, discs, pyramides and rings like a mis-shaped donut.   The crack across the top of the object is consistent with it being a stromatolite which would develop as the upper layer of algae was exposed and dried over time as is the western NY location in which it was found as similiar objects have been found there.

The Fish are on to me

With a few nice outings on the with my favorite fly (Ausable bomber) in faster water on the Farmington River, I decided to give it another go but the fish were definitely not fooled !  I had several put their snouts under the bomber and follow it a while but no takers.  Funny that I had this very same experience on the Farmington last year, the bomber works for about 2 weeks and then that's it.  Either it looks like something that is no longer on the water or the fish get wise to it.  These are the puzzles that make fly fishing so interesting ! I did have some success with an iso comparadun as I have been seeing these on the water in the later afternoon and finished up early with one taking a cream snowshoe hare emerger.
Posted by MarkW at 8:22 AM 2 comments:

The colors of late summer in the mountains

August has arrived, a time when the brooks of the Adirondacks are thin but still cold and wildflowers are everywhere.  The woods are starting to show the signs of the coming fall as the trees begin to take on a redder hue. I headed out thinking that the heavy showers we had the previous day would raise the water levels a bit.  When I arrived the stream was still a cool 65 degrees but the rain had done little to boost the flows.  Pictured below is the same area in early august as compared to early July.  What a difference a month can make. 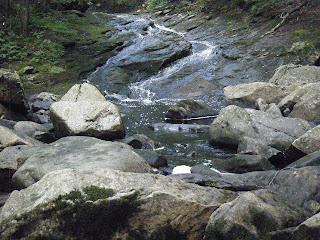 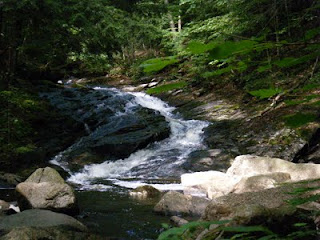 This day the fish were mostly holding in the head of the pools where the more oxygenated water was or in deeper runs with plenty of water moving.  Today I would enjoy the colors of the forest from flash of a bronze belly in the foam line as a brook trout took a sunk lime trude, to the fish showing a lot of red in the fins and bellies, to the abundant display of wildflowers awaiting those who are willing to venture on the trails not often traveled.
Posted by MarkW at 8:58 AM 3 comments:

Headed up to the Farmington River yesterday afternoon to fish the fast water again.  It was another beautiful day out and with the lower summer flows I was able to get into several fast riffles that can be tough to access at other times of the year.  The bomber was the ticket yesterday with 3 big browns in the 16-18" range taken and one smaller one.  I did manage to land a higher percentage of the browns by being a little more patient and working the fish into the slower seams although two did break me off including a large copper colored brown that took the bomber in front of a large rock in some very heavy water. 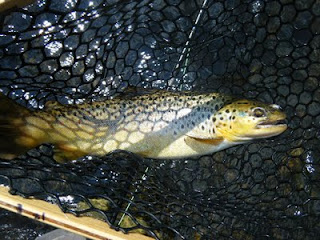 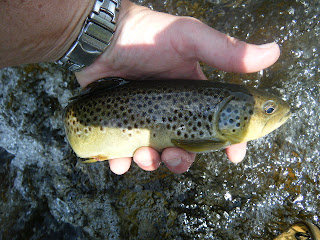 Now that the warmer weather is here, I tend to fish the Farmington River more often since as a tail-water it stays cool during the warmer summer months.  This time of year, I like to fish the fast water with a favorite combination, the Ausable bomber with a bead head pheasant tail soft hackle trailing 30" off the bomber.  The bomber is easy to see in the heavy water and is a great indicator.  Last Friday, I had the chance to fish the afternoon into the evening.  I only brought a couple of fish into the net but I hooked quite a few good size trout that would run into the heavy current and either break me off or the hook would lose it's hold.  I had a lot of fish follow the bomber but all the fish hooked took the PT.  Fran Better's Ausable bomber never ceases to amaze me, it looks like nothing and yet it looks like everything.  It is by far my favorite fly to fish and takes  brook trout in the Adirondacks as well as "educated" fish in rivers like the Farmington.
Posted by MarkW at 8:15 AM 4 comments:

The winner of a dozen flies from Fishing Small Streams is IB.  Please shoot me an email with your selections and an address to send them and let us know how they work on the fish in your neck of the woods.  Thanks all, for making this a fun year.
Posted by MarkW at 8:02 AM 2 comments: