I have spent a few days exploring three brooks that have been on my list to visit.  The first was a brook pretty close to home that is supposedly stocked but I have never seen anyone fishing it. The brook is heavily overgrown and hard to get to and move around but I have caught wild browns in there in years past.  This was my first visit this year.  The water appeared high and cloudy but a few fish came out of their hiding places to chase a bead-head pheasant tail soft hackle dropped off a bomber. 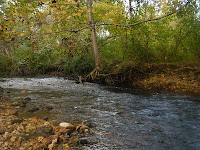 The second brook was a little further away in a section of CT I rarely visit.  The afternoon was warm and humid and I was surprised by the number of hardwoods starting to turn yellow.  We normally we see a mix of red and yellow, with more yellow in dry years but we've been anything but dry the last month or so!  It was a beautiful little stream with a noticeable tannin stain.  The section I fished held mostly fall fish, some quite large and aggressive.  But catching them soon grew old so with only a few hours of daylight left I moved to a tributary and found the only brown trout of the day.  I'll have to go back again this fall to do some more scouting because the trib looked interesting.
The following day I visited the West branch of the Croton river in NY.  Again another humid morning with a thick fog hanging over the river until the rising sun burned it off.  It wasn't long before I hooked a wild brown that put up quite a fight.  I had my hands full keeping it out of the sharp rocks.  Unfortunately I could not get a picture of this nicely colored brown since he wouldn't stay still for even a brief moment.   The rest of the morning was spent hooking fish but quickly losing them.  Again the beadhead phesant tail soft hackle was the fly of choice.  Turns out Kiwi of The North River blog was there the day before.  I think the reason the catching was on the slow side is that he and Chris stung them all the day before !  Nice job Kiwi, maybe we will run into each other some day
Posted by MarkW at 9:48 AM 4 comments:

I headed out friday morning to fish a small stream and only a few hours to fish very early in the morning.  It was still mostly dark when I arrived and I was greeted by a red fox in my headlights as I approached.  The air temperature was in the 40's and it was the first time this season where the water actually felt warm.  Things were slow early but I did manage to bring a couple browns to hand as the sun started to warm things up.


Yesterday afternoon, I headed out with a friend to re-visit the stream I had fished last week in search of a decent brown (see 9/11 post).  What a difference a week can make!  The water level was down quite a bit and the fish were distinctly absent from the lies they were in previously.  After bringing a few small browns to hand we moved upstream a ways to water that was new to me.  A dozen or more browns were caught using a large elk hair caddis and Ausable bomber to discourage hooking the smaller fish.

Several of the fish were starting to show their fall colors.  The best fish of the afternoon was a beautiful brown in the 12 inch class that took the caddis in the slack water against the bank.  In fact, most of the larger fish were we not in the main current but hanging close to the bank.  It was a beautiful, cool, early fall afternoon to enjoy in the outdoors and I was thankful for the opportunity to be out in what is my favorite time of year.  I hope you too have a chance to enjoy this great time of year as well !

9-11-2011 was a day full of a lot of emotion as this country remembered the events that occurred ten years ago and honored those who lost their lives.  As we witnessed a mass-murder occur on our own soil, that event forced us to acknowledge that evil is ever-present in our world and we are not sheltered from it.  It was also fitting that this anniversary should be celebrated on a Sunday when Christians celebrate God’s solution to evil.  God became one of us, walked among us, experienced everything we experience without fault or error and gave his life to satisfy God’s wrath for sin and evil, and was raised again from the dead gaining victory over evil and it’s consequence of death so that we might be set free to enjoy Him forever.

After an emotionally intense morning, it was nice to enjoy lunch with some friends and then head out to a small stream later in the afternoon.  Fishing small streams is kind of like going home for me, reminding me of simplier days spent fishing small meadow streams with my Grandpaw, listening to his incredible stories, and taking all the sights, sounds, and smells in.


I planned to visit a stream I had not been to since Huricane Irene and the heavy rains that followed a week later. I was not sure what I would find and how different things would be.  Walking along the stream’s bank you could see how high the water had been, in some areas a swath of bent brush and grasses extended 50 ft from the stream’s normal bank with many larger trees uprooted toppled here and there.   Altough the stream’s landscape had changed 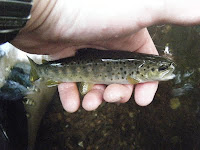 there was still signs of healthy life including one beautiful little brown trout that neatly fit in the palm of my hand, measuring no more that 3 inches.  I started out with an Ausable bomber but switched to a royal trude and eventually a royal bomber.  The royal bomber was the fly of the day and many fish took it either dry or swung like a wet fly with a handful of wild browns and brookies brought to hand.  The best fish of the day took the royal bomber swung by the base of the tree.  Immediately you could tell this fish had some weight.  After a couple of incredible leaps the nice brown tossed the hook and we parted company, hopefully to meet again another day. 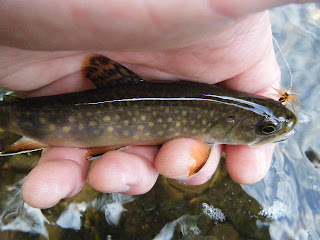 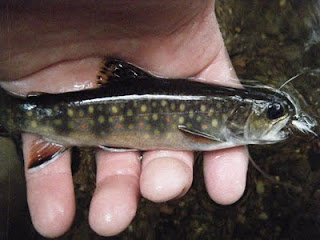 Irene came and left about a week ago but many are still without power.  We made out pretty well with just a few large trees down that fortunately did not do too much damage.
I did manage to get out for a couple of hours to a wild trout stream that I haven't fished since the spring.  The water was reasonable clear but was up to spring time levels with lots of limbs in the water.  As best I could tell the fish were holding in the same places they were the last time I was there.  I spent the late afternoon/early evening drifting an Elk hair caddis through the riffles at the head of the pools and hooked quite a few brookies and browns with  just a few brought to hand.  It was nice to see this little stream had weathered to storm.
At one of the larger pools, I watched a couple of fish come completely out of the water chasing something I could not see.  I tried a few dries without any luck as well as a wet or two.  I've seen this before in the fall and my best guess is they were chasing caddis puppa but I did not have any partridge and green/orange flies with me to drift past them.  I guess that experiment will have to wait for another day.


This past weekend we traveled up to the Adirondacks and both the CT and Hudson rivers were still high and muddy even a week later.  As we traveled through the Albany NY area you could still see the effects of the severe flooding this area sustained and shut down the NYS thruway for several days.  I was not sure what to expect as we traveled further north, as I had seen reports of flooding throughout the Adirondack Park.  The rivers we passed were at springtime levels but were relatively clear.


I did manage a couple of hours on a nearby brook that I've been exploring.  The rains had brought the brook up to a nice level and I was able to bring a few brook trout to hand.  Some were starting to show their fall colors.