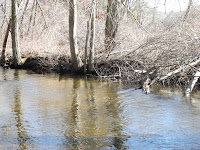 With the temperatures unseasonably mild this afternoon, I took advantage of the opportunity to get out and get some fresh air and do a little fishing and exploring on a small wild trout stream.  I was a bit surprised to see the water temperature holding at 40, despite some snow melt this week.  The sun was out, it's light playfully reflecting off the riffles of this little gem of a stream. 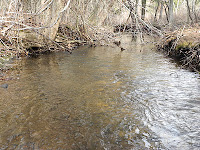 The year began as 2011 ended with the first fish being a brook trout, a particular favorite of mine.  As I continued to explore a section of the stream I had not fished before, I had a few bumps and short strikes. I was hoping to find a tiger trout as this stream is known to have and few and sure enough in a deeper slower run a savage strike was followed by holding my first tiger trout.  I finished up the day with a pretty little brown and decided head back to the car.  What a great way to kick of 2012 ! 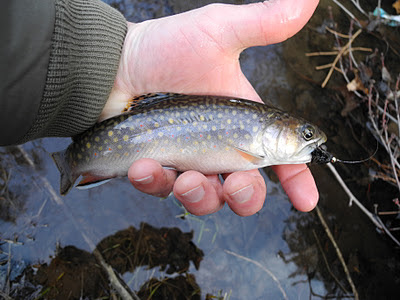 Kicking off 2012 with a brookie 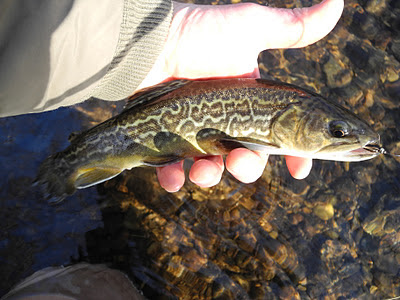 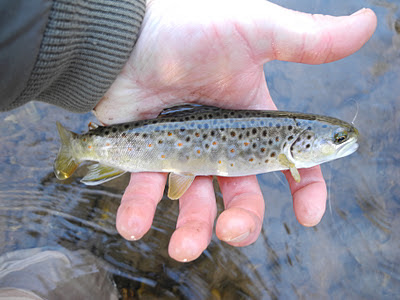 Finishing off the afternoon with a wild hat trick

Juncos in the snow 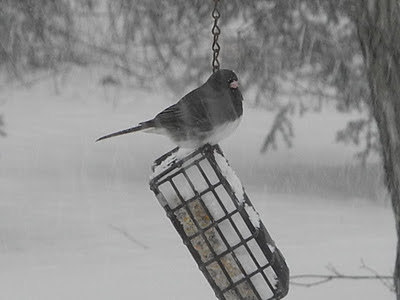 When I think of winter, I think of juncos in the snow !  This morning the snow is coming down and there's no place I have to be and no long list of things that need to be done.  It's been a very long time since I could say that !  This morning I am just enjoying the junco's flittering about the feeders and drinking some coffee as a gift from a gracious God who provides seasons of work and rest.
Posted by MarkW at 11:14 AM 3 comments:

Just a quick post for a knot that I now use almost exclusively for attaching the fly to leader.  The Davy knot was invented by Davy Wotton.  I used to use an improved cinch knot until I started using this knot.  It is quick to tie and strong but what I like most about it is that there is very little waste, meaning you can change your fly many times without having to tie in a new tippet. I highly recommend this knot except when using a fluorocarbon tippet as I have had this knot pull out with fluorocarbon (I think it is due to the lower friction generated when fluorocarbon rubs against fluorocarbon).

Follow this link to see how to tie a Davy knot
Posted by MarkW at 5:04 PM 8 comments:

Several people have asked how the bead head pheasant tail and partridge soft-hackle is tied so I thought I would put together my first "step by step".  This fly is not a direct imitation but rather an impressionistic fly that can represent a number of insects including olives and small stoneflies.  I first saw this fly in NH at a shop on the Upper Connecticut River a few years ago.  This fly can be fished on the dead drift or swung but is especially deadly when swung with a "twitch".  I really like using this fly as a dropper off a large dry such as the Ausable Bomber.  I tied this fly in both #16 and #18, in both brown and black. 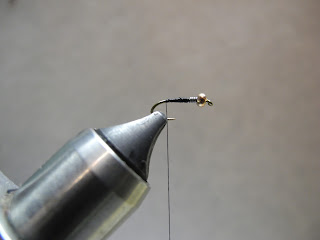 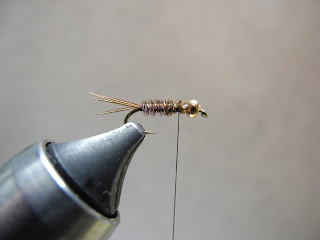 Tie in two peacock herls behind the bead and wrap back to the end of the pheasant tail body.  I then take the two herls and the thread and pinch it in hackle pliers and spin them in a clockwise direction to form a tight rope.  This reinforces the peacock herls and forms a nice tight rope for forming the thorax. 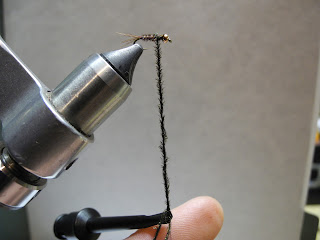 Wrap the peacock herl rope 3-4 turns up tight against the bead.  Next choose a small partridge feather with such that the fibers are about the length of the fly.  You will need to choose a feather from the upper neck of the bird. Tie the feather in by the tip.  There are several ways to tie in partridge for soft hackle flies but with feathers this size the only practical way to wind them in when the feather is tied in by the tip.  Bind down the tip tightly with two secure wraps and snipe the tip off with your scissors. 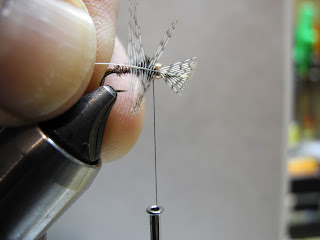 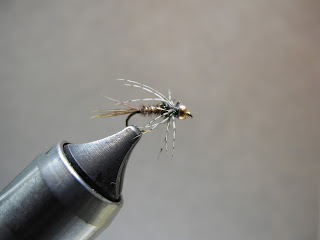 Another variation of this fly that I like especially in winter and early spring with small black stoneflies are around uses pheasant tail fibers that have been died black with a gun metal bead.  For hackle either black hen hackle can be used or dark India hen (as shown) for a more mottled hackle.  I also tie the fly without the bead on a #18 dry fly hook for when fish are taking emergers in the surface film. 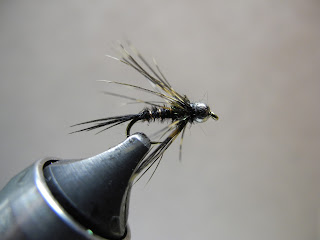 Hope this little step by step helps you tie a few of these deadly flies !  Tight lines
Posted by MarkW at 9:35 PM 11 comments: