Brookies, Cabella's custom glass and some of Kiwi's flies 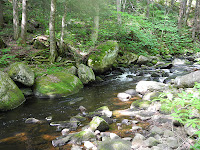 We were in the Adirondack mountains for the memorial day weekend.  After the usual spring chores, I was able to slip out Monday morning and fish a favorite brook and give the new Cabella's custom glass 5'9" 3 wt a trial run as well as some flies I received from Kiwi from The North River blog.


I decided to get a early start since there were still some black flies around and they tend not be active in the cool of the morning.  The brook was in great shape with a nice flow (not too full, not too thin).  The water temperature was a bit warm for early spring (62F).  I started out with my personal favorite for these waters, the Royal Wulff, and the brook trout definitely approved.  A dozen plus (I quickly lose track when fishing this type of water) were brought to hand ranging in size from a couple inches to a healthy (for this stream) 6-8inches. 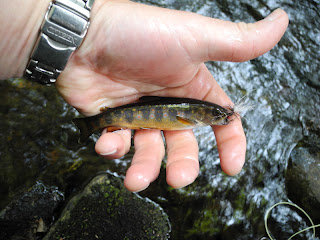 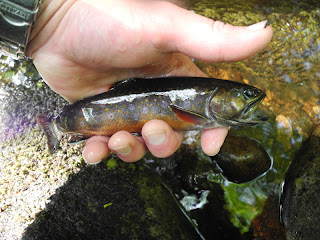 Most of the fish were in the heads of the pools and where eager to slash at the Royal Wulff.  All the fish fought hard and were tough to photograph but I did get a couple good shots.  All in all they seemed to have wintered well.  At one point it dawned on me that I was carrying some flies from Kiwi (a green hornet, and a killer bug) so I gave them a try and the fish showed their approval.  It was fun to watch the fish give chase to the flies as they were carried along by the swift current.  Another highlight of the trip was seeing a pink lady slipper.  These are somewhat rare wild orchids that grow in the soil of pine and hemlock forests.  The last time I saw one of these was more than 30 years ago on a bog in Western NY. 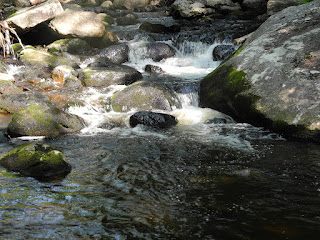 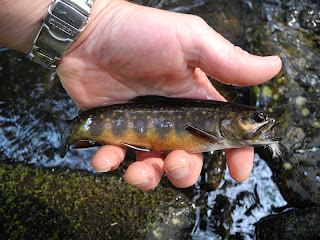 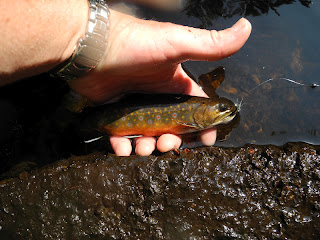 A colorful brook trout that was interested in Kiwi's green hornet.  The Killer bug also drew some interest but were not willing to be photographed 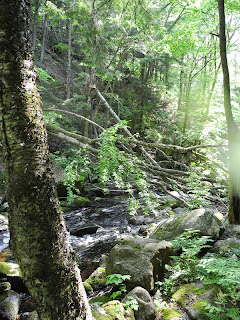 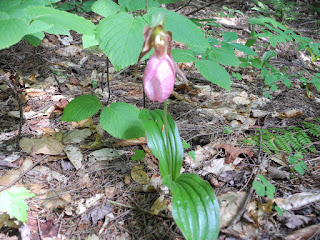 A pink lady slipper in bloom

In addition to enjoying the solitude of the brook and surrounding forest, this trip also gave me a chance to give the new Cabella's custom glass 5'9" 3 wt a good trial.  I had not previously fished a rod this short, so I was curious how it would perform.  I have to say that once I got used to the slower rhythm needed to work a glass rod, it handled extremely well.  I paired the rod with my smallest orvis battenkill I with 4wt DT line.  The combo handled very nicely.  This little rod roll casts amazing well and delivered the flies with a nice soft touch.  I had no trouble laying out a 25-30 ft cast and it excels in tight quarters.  The rod is nicely put together with a very nice finish and quality components.  I especially like the simple handle with the two bands to hold the reel, reminiscent of the old bamboo rods.  This is a very nice small rod well- suited for small stream fishing and a great bargain that I would definitely recommend to those who enjoy fishing small streams. 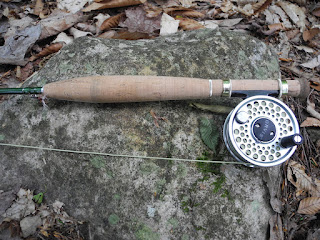 Cabella's custom glass rod (5'9" 3wt) paired with an Orvis battenkill I and Royal Wulff in the fly ring
Posted by MarkW at 7:16 AM 7 comments: 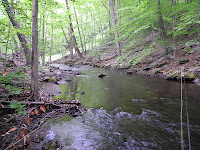 Earlier in the week I was traveling for my job and on the trip home I stopped off at a wild trout stream to take a break from the traffic and fish for the remaining couple hours of daylight.  I was surprized by how low the water was.  In a couple of the pools fish were taking some small midges off the surface but I decided to fish a larger caddis dry in the riffles at the head of the pools.  I managed a brookie and 3 browns, the next to last of which was a good size fish for this small stream that ran all over the place and took a little to land.  Unfortunately, he was anxious to return home and was not interested in being photographed.  When I reached the car to break down my Echo2 3wt for the rest of the trip home, I managed to pull the reel seat apart so it went back for repairs yesterday.  No worries though, since I picked up a Cabella's Classic fiberglass 5'9" 3wt that was on sale recently so I will be fishing small streams with it for a while.  The rod has recieved some very nice reviews so I am anxious to see how this tiny rod casts on a small stream.  I'll let you know what I think of it after I've had a chance to fish it a bit. 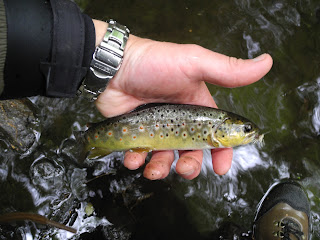 Back to small streams and brook trout

My last several posts have left me thinking about whether I should change the name of this blog.  This spring has drawn me to some of the larger rivers I fish with the promise of large fish eager to take a dry.  This past weekend the plan was to fish a small mountain stream in the Adirondacks.  I was expecting the black flies to be going strong, but they really weren't too bad most of the time.  Just in case, I planned to be out by dawn.  The morning started off crisp to say the least.  With the thermometer reading 31F, there was no fear of being eating alive by black flies but I could not feel my fingers until the sun started to warm things up a bit!

The stream was in good shape and lots of water moving through despite the lack of snow melt this year.  A quick check of the water temp showed it to be 52F.  With the higher flow, my best bet was a micro bead head peacock herl bugger drifted and twitched in the soft seams.  I hooked quite a few fish but most dropped off before their pictures could be taken.  The fish in general were very well colored with dark backs and orange to cherry red undersides typical of brook trout in these tanin stained waters.  Most were on the smallish side but this was probably due not being able to reach the bottom in the deeper sections due to the strong flows.

Enjoy the pictures of God's handiwork, His artistry in unmatched ... 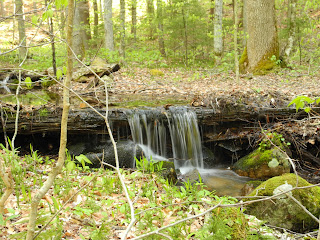 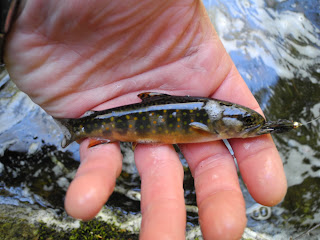 Even little guys will chase down a bugger 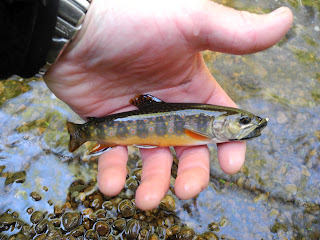 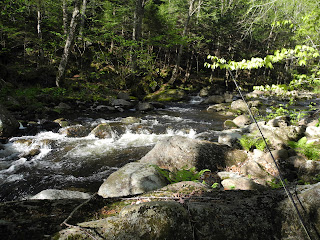 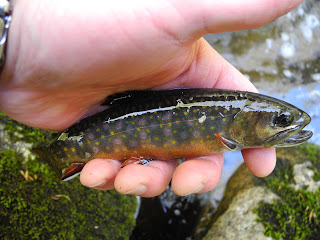 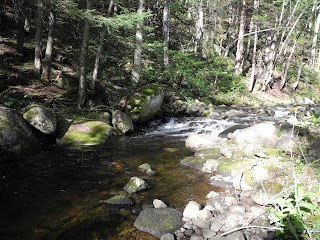 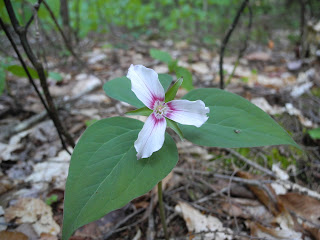 White trilium (protected in NYS), common in forests that have never been tilled
Posted by MarkW at 9:48 AM 3 comments:

This past Saturday, I had so jobs around the house that needed attention so I was up early.  The plan was to work the early morning and then take a break around 10:30 and fish til 3:30 then finish up with some yard work.  Getting some time to get out fishing is a great motivator to get going on the work.

Anyway, on the trip to the river the cloudy skies turned to a light drizzle.  When I arrived my friend was already at it and had two fish to the net.  The tan caddis started coming off shortly after I arrived so I tried a tan X-caddis with a few misses.  The best fish of the day was a 16+" rainbow that was sipping at the tail of the pool in some shallow water next to a rock.  I swung the hare's ear wet in front of it and set the hook when I saw the fly line darting upstream.  No picture as this fish was quite agitated and camera shy.  I did see a larger fish poking his snout out of the water taking adults off the surface but he was under some tree branches in a soft seam with faster water between his position and me.  After a couple of tries, I managed to land the dry right in front of him and got a decent drift.  As the fly approached his position, up came the snout I was looking for and snap went my tippet (4x no less !).  That was to be the theme of the afternoon with way too many long distance releases and only three fish to the net.  It was one of those odd afternoons where it was tough to tell just what the fish were taking.  I hooked fish on a hare's ear wet, tan X-caddis, Lafontaine tan caddis puppa, and a Griffth's Gnat. 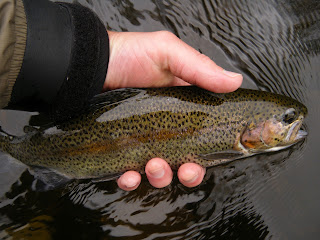 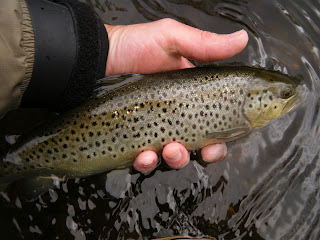 It's been a while since I fished a small stream but with the larger rivers fishing so well these days, I've been lured away but the prospect of catching some good size, healthy browns and rainbows.  The fish definitely seem bigger and stronger this year vs previous years.  This weekend coming I hope to get up to the Adirondacks for the first time this season and fish for some mountain brook trout if the black flies allow.
Posted by MarkW at 10:18 PM 3 comments: