I was able to rearrange my work calendar and get out yesterday afternoon/evening.  I met a friend on the Farmington with the plan to fish the fast water with big dries.  First spot was a dud, probably too much sun so I moved up to a shadier deep run and hooked decent fish on the bead head pheasant tail dropper that I was trailing off the bomber to hedge my bets. After a nice run upstream he managed to toss the hook but no worries the day was just starting.  Then I missed a second on the bomber so now I was 0 for 2.  I had brought along the Cabella's CZN nymphing rod so I thought it was a good spot to work on casting, leading the flies, and strike detection.  I hook and dropped another on the anchor fly and then tied into a brute that I managed to stay with for quite a well.  This fish was big and was staying on the bottom shaking his big head.  He made several charges, pulling the rod sharply down into the water on each dive but I managed to keep him upstream of me so I thought I would just try to hang on and tire him out.  But he eventually won the battle, snapping off the 5X fluorocarbon at the triple surgeons knot and taking the dropper and anchor fly with him. I was now 0-4.

We decided to change locations and try another favorite spot of mine that few people fish.  When we arrived I was amazed at how much th Hurricane Irene had changed the river.  What was once a nice bend and riffle was now a straight shallow channel and the bend had been completely removed.  There was still one promising run with a very nice looking hiding spot.  I ran the bomber along the right side of the rock in picture below and up came a nicely colored brown.  I managed to ease him around the rock, out of the fast water and into some softer water and land him so I was now on the board. 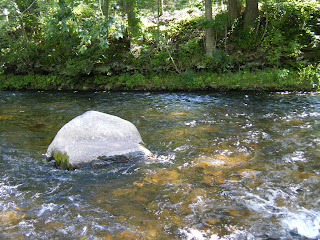 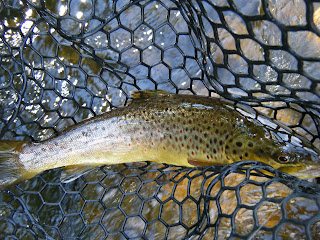 We decided to move to a third spot where I picked up a small rainbow on a Usual again in fast water.  But this spot looked pretty quite as well so a quick call to Pete, aka TROUTI, who was also out fishing the Farmington with Brk Trt  indicated there was some sulfurs hatching at a another location so we decided to move upriver while Pete and Brk Trt decided to move downriver.

The last spot was golden.  We started in around 7:30pm and there were fish rising to small emergers.  I managed to nail one brown on a small pale yellow comparadun.  We started seeing some tan caddis around so I switched to a tan Lafontaine emergent puppa and picked another brown and a rainbow and then went back to the comparadun later and picked up another brown.  With the light fading and the twilight approaching the faster water at the head of the pool started to erupt.  On went the Usual and the game was on!  For the next 30minutes I was catching nice rainbow after nice rainbow.  Some fish managed to free themselves in the heavy current before they reached the net but the upside was that I didn't have to take the time to turn on my headlamp and remove the hook.  I'm not sure how many fish I landed but it was definitely more than four !
Posted by MarkW at 8:39 AM 6 comments: 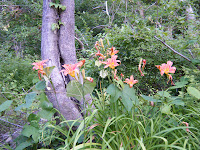 Sometimes you fish when you can and not necessarily under the best of conditions.  I had the chance to fish last evening so I did despite the strong winds from a cold front that moved through.  The wind made casting upstream nearly impossible and there wasn't a hatch to speak of which wasn't too surprising and certainly no spinner fall but sometimes you just have to adapt.  I chose to fish some large heavy water dries in the faster water and to see what I could dredge up.  I really like this type of fishing and my two favorite flies for this game are Fran Better's Ausable Bomber and the Usual.   This type of fishing is not a high percentage game in terms of landing fish.  Both flies brought fish up to the surface including a good size rainbow that took me on some long runs and a couple of spectaculor leaps. 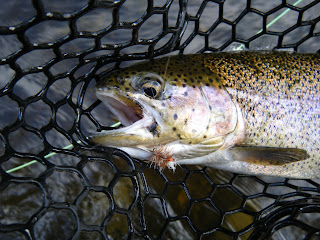 Bombers, not just for brook trout !
(the fly had come out of it's mouth in the net)

The highlight of the evening was laying out a long cast that I had to quarter downstream due to the wind and under some tree branches to reach a brush pile along the opposite bank.  The Usual landed within 6 inches of the pile and I got a nice drift along the pile and up popped a snout.  The fish quickly ran out into the heavier current and broke me off but I'll be back to say hello again soon
Posted by MarkW at 12:36 PM 3 comments:

Thunderstorms in the forecast

Headed up to the Farmington last night, probably not the best call with thundershowers in the forecast.   About 30 minutes before I reached the section I had planned to fish the skies opened up and down it came.  At one point, I pulled into a office complex to sit out some heavy downpours and watched the water coming out of the downspout like someone had opened a fire hydrant! 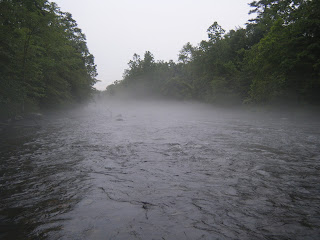 A cold fog hanging over the river

The river where I had planned to fish was muddy with limited clarity so I opted to head up river above some of the major tributaries to see if things would be clearer.   It was a surreal experience with a cold fog hanging over the river with warm humid air just above.  There was limited visibility in the fog but I did manage to catch a couple of brookies and a brown.  It's rare that catch brook trout on the Farmington and this was the first time I've caught more than one.  I don't know if they were wild but they were on the smallish side which makes me think that I was in a section of the river that might have some wild fish. 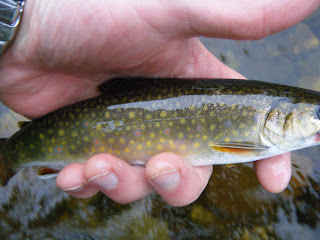 A couple evenings on the Farmington 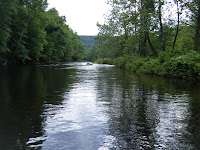 Things have been very busy around our house this past month and not much time to head out fishing.  But things have eased up the last week and with an open firday afternoon I made plans to meet up with a couple friends and fish the Farmington River in Northeastern CT.  The day was one of those beautiful June days with temps in the low 80's, clear, and dry.


The afternoon started slow, although there were a lot of small cream mayflies coming off, there was not a lot of surface activity.  I fished wet flies for a while but only had a couple bumps on the bead head pheasant tail soft hackle.  There were a couple fish gently sipping something I couldn’t see.  After a couple of tries, I managed to get a decent drift with a #18 pale yellow comapardun and promptly overreacted and snapped the tippet when the fish rose to the fly. Working down under the trees along the opposite bank I did manage to take a decent trout when I floated a foam ant over him.  As sunset approached things really light up as the large Light Cahills started coming off in good numbers and the trout were starting to chase them with abandon.  I elected to concentrate on the faster water at the head of the stretch we were in while Pete and Bill fished the tail of the riffles and the slower water.  At one point we were all locked into fish at the same time.  As dusk approached, we picked up a couple more fish on smaller sized comparaduns before things went quite.  It was a gorgeous day and a great evening to be out fishing with a couple of good friends. 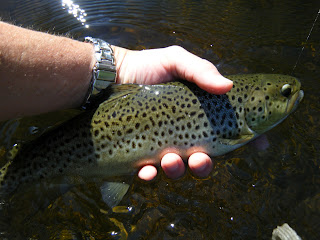 Yesterday afternoon and evening offered another opportunity to get out.  The day was overcast, dry, and cool with a water temp of 58F.  I arrived about 5:30 in the afternoon and the small Cahills (#18) were coming off with little surface activity except for the odd fish sipping under the canopy of some trees.  I managed to hook and land one brown on a #18 light Cahill, and then tried a #16 rusty spinner and picked up another.  As sunset approached the surface activity picked up as it had a few days before and I managed another pair of browns on a #18 pale yellow comparadun and a rainbow on a usual.  As darkness started to settle in, I switched back to the rusty spinner and picked up the best fish of the night, a pig of a rainbow that measured between 16 and 17 inches.  I picked up another brown on the spinner before it got too dark to see. 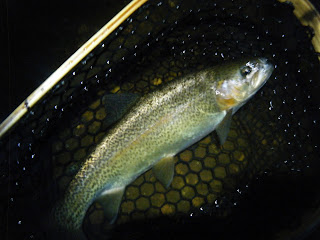 Rainbow taken on a spinner in the dark

A friend just returned from a Salmon trip to the Kola peninsula in Russia.  Check out this video of him landing a 20lb Atlantic Salmon