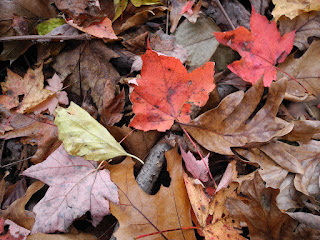 There are times in all our lives when we just need to get away from the noise and busyness of life.  What better way to refresh the soul than spending the day outside.  The day started off meeting up with my friend Ben for some salmon fishing.  After spending the morning swinging salmon flies I traded the 7 wt for the 3 wt and stopped by a small wild trout stream and enjoyed the falling leaves and quite calm of a woodland stream in late October. 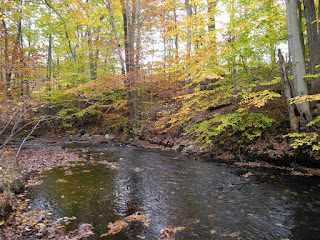 A handful of handsome browns and one brook trout were brought to the hand using small black stimulator with a bead head pheasant tail and partridge trailed off the back.  A few fish pounced on the stimulator but none were hooked.  The pheasant tail was the fly of choice this afternoon. 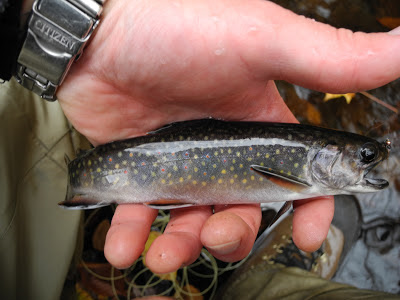 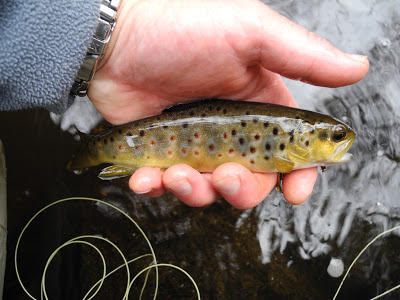 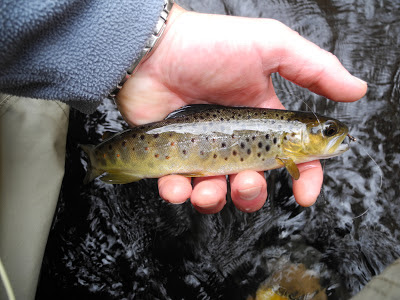 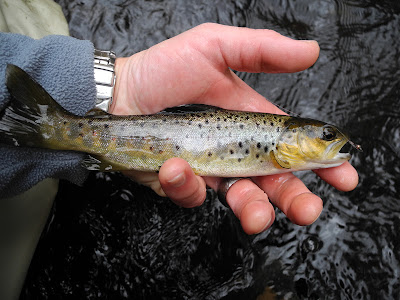 Headed out mid afternoon Sunday for a couple of hours of fishing.  I brought along the streamer rod along with some of the large streamers I recently tied up for the fall.  This would be my first attempt at fishing these on a sinking linking line.  I was amazed at how quickly the line brought streamers down in the water column.  Nothing was interested in chasing the streamers but I did split the time Euro nymphing and managed to tie into a nice rainbow that was living in front of a pile of brush.  It took a Strolis #20 DDT
Posted by MarkW at 9:19 AM 4 comments:

When you fish a small stream several times over the course of a season, you become very familiar with it, like an old friend whose look tells much more than the actual words that pass between you.  The trout season in New York State is rapidly winding down, so I wanted one more chance to visit with an old friend of mine.  I've fished this brook for many seasons, there's just something about it's rugged beauty that keeps me coming back.

With the recent fall rains, the water levels were quite healthy and with air temps in the upper 40's there was no doubt the water temps were cool.  Funny thing is, when I fish this brook in October, I rarely catch many brook trout and this trip would be no different.  Perhaps the fish are preparing to spawn.  Plenty of fish would chase and bump mini black bugger, baby brook trout, or 13th lake streamer but only a few were brought to hand.  It was great to be out in the raw air and smell the damp hemlock and fallen leaves.  Most of the red maples had dropped their leaves leaving a forest of yellow, pale green and dark hemlock green.

I am small stream fisherman through and through.  It takes me back to when I was a kid fishing with a simple pole, and a can of worms in the southern PA pastures and meadows.  There is just something very pleasant about fishing simply, a small box of flies, a pair of hiking boots, and a 3wt. 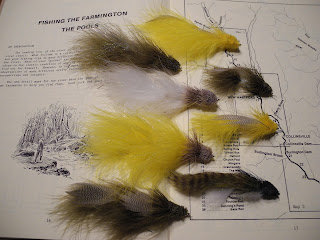 While this is the heart of my fishing, I do enjoy learning new techniques and styles of fishing.  As fall approaches, I thought I would go big, really big!  So here a few of my first attempts at tying some larger streamers along with a few articulated streamers mixed in.  Curious how my 7wt and casting stroke will handle these and a sinking line.  I'm flinching just thinking about these things whizzing by my head.
Posted by MarkW at 8:52 PM 8 comments: