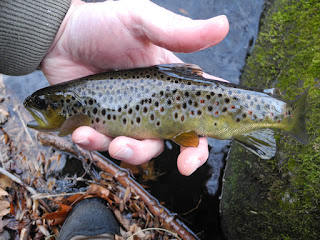 I was traveling this afternoon for work and just happened to be passing a small stream known to hold some wild brown trout and I just happened to have my small stream rod and box of flies.  With about an hour left of daylight, I was stream side.  Forty five minutes of late afternoon fishing brought a fist full of wild browns to hand along with a few misses.  All the fish today preferred the bead head pheasant and partridge to the pumpkin head midge.  A very much appreciated break in the monotony. 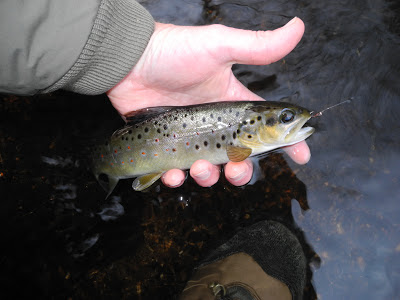 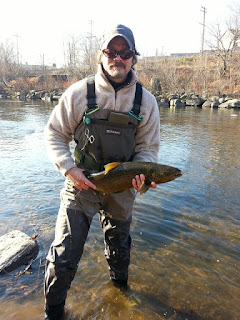 You can't beat the Mickey Finn for salmon on a bright day.  With the colder morning, I thought a sinking leader and a larger fly might be the ticket so I started out a tube fly version.  After no sign of interest, I switched over one tied on a classic salmon single and the next pass through the run produced a nicely color male.

How to spend a day off

Today was the only day that my calendar was free enough to take a day off.  I usually try to save a few vacations days for late fall as I really love being out in the November air.  Today was a little cooler than it's been for the past couple days.  When I left the house this morning the thermometer was reading a chilly 39F but the sun was out and it made it seem warmer than the thermometer indicated.  The plan was to fish a small wild trout stream in the morning and do some salmon fishing in the afternoon. 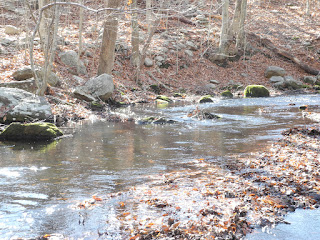 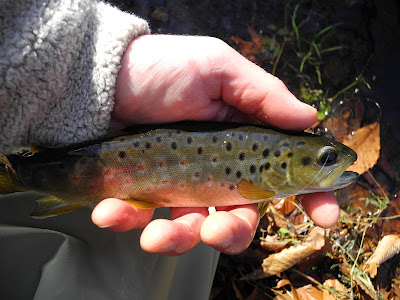 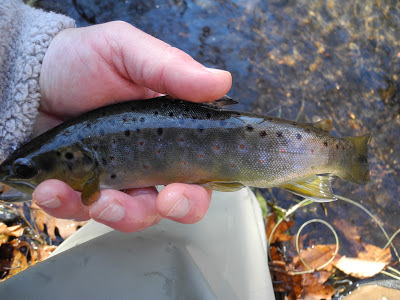 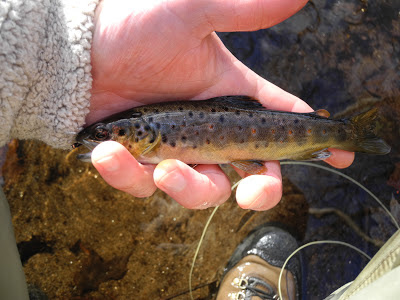 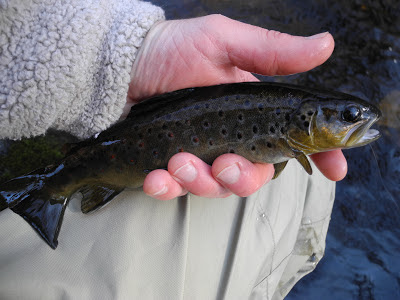 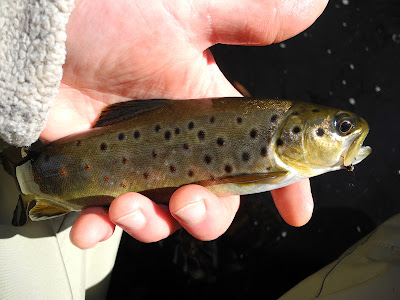 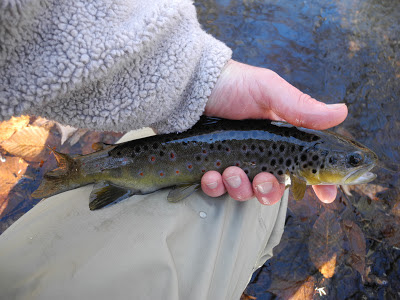 With a few hours of afternoon left, I headed off to fish for broodstock Atantic salmon.  The state of CT breeds Atlantic salmon in a local hatchery and then releases them into a couple designated areas in the state.  With the federal restoration program ending in the Northeast, the state plans to maintain the program for CT sportsmen.

When I arrived, an older gentleman was in the process of landing one and he asked if I would assist him since he was spin fishing from shore and would not be able to easily land it in the spot he was.  I managed to tail it and hand it over to him and take a couple of pictures.  After he landed the fish, he headed home leaving his email address so I could send the pictures to him.  Not 10 minutes after he left a good sized salmon exploded on my Mickey Finn mid drift and proceed to peel line off my reel as it headed clear across the river and into a shallow area clear on the other side.  It managed to get the line hung up on a rock and I could not budge it so I headed across the river, hoping I could make it all the way across.  When I reached the snag, the fish was no where in sight.  After I freed the line the fish took off upstream in another blistering run.  I figured I would stay put and land it on the other side but the fish had other ideas and headed downstream and between some submerged rocks so I followed trying hard to keep the line free from another snag.  At this point I was in the middle of the river so I opted to head back to the side I started on and try to land it in a sandy beach area.  After a long tug of war I did manage to beach it.  Unfortunately my camera's battery was dead but another fly fisherman offered to take a picture on his camera phone and send it to me.

What a great to be able to enjoy the outdoors and manage to fish for beautiful wild brown trout and Atlantic Salmon all in the same day. 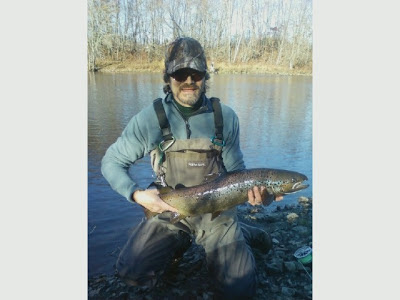