It's getting cold around here with snow expected overnight.  It was a good day to get organized and clean up the spring fly box.  Tan and green caddis usually follow the Hendrickson hatch around here.  This past spring, I had good results fishing a hare's ear wet fly similar in construction to the Hendrickson wet.  I tie this fly either with a rusty brown thread or burnt orange thread (both versions are shown below).  For the thorax of this fly and the Hendrickson wet, I form a dubbing loop and touch the dubbing to the waxed thread and then spin it. 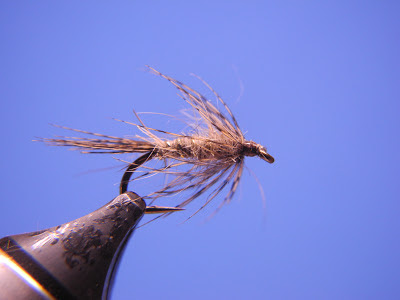 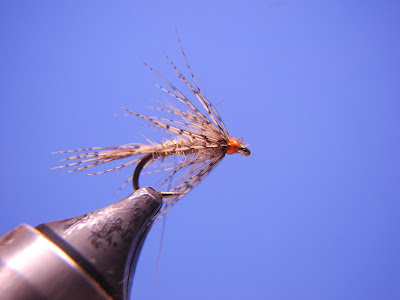 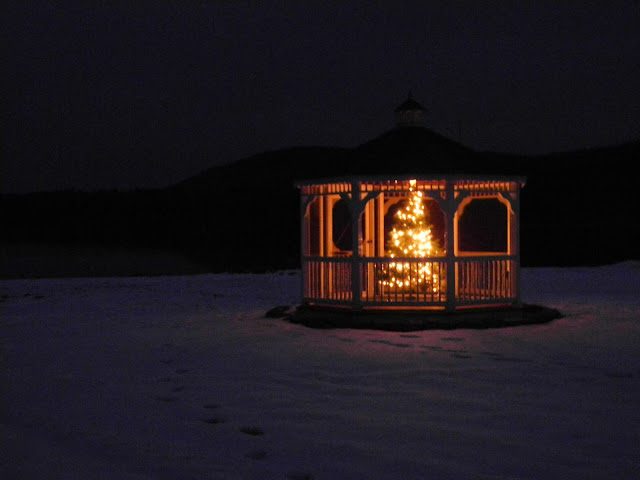 Even though recent events have reminded us of the ugly reality of life, this season is time to remember God’s great love towards man.  Jesus Christ entered this corrupt and violent world to live among us and eventually die for His lost creation and in so doing forge a lasting peace between sinful man and a Holy God.   This Christmas, let us embrace the gift of all gifts; a Savior who came to set us free from sin and bring everlasting peace and joy into the hearts of to all those who put their faith in Him alone.
Merry Christmas to all !
Posted by MarkW at 2:52 PM 2 comments: 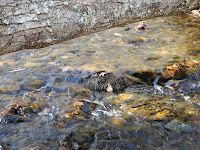 As the end of the year draws to a close, it was a nice opportunity to enjoy another mild December afternoon with Alan and Kirk.  The morning started off cold and slow with not much activity to speak of until early afternoon when the fish were active for a couple of hours and interested in taking a dry fly.  Each of us caught a handful of beautiful winter brook trout, most still  bearing their fall colors despite the low water temperature (38F).


A tan elk hair caddis and a peacock herl-bodied elk hair caddis were the flies of choice.  As the sun and air temperature started to drop in the late afternoon sky interest in the dry flies tailed off as well.  I finished up with a couple on a lighten bug with some soft brown hackle just behind the bead.

The Hendrickson comparadun and soft-hackle

Following the emergence of the early black stones, the next major hatch in the Northeast is the Hendrickson emergence.  Who doesn't like fishing large dries to hungry fish that are looking to the surface?  The Hendricksons get going sometime in April in these parts and this year things started off at the end of March and lasted the whole month of April.  When the fish are actively taking emergers and adults off the surface the comparadun is the fly I go to.  Truth be told, I find myself fishing the comparadun for most mayfly hatches these days.

I use Delaware River Club spectrumized dubbing (Red/brown) for the Hendricksons.  I really like this dubbing because it is a blend of many colors that give an impressionistic look to the fly.  The wet or soft-hackle version of this fly was also a top producer for me.  I start off fishing the wet trailed off the bend of the comparadun.  Initially, I catch fish only on the wet, then as the fish start focusing on the adults they will take the comparadun and then back to the wet when the hatch tails off. 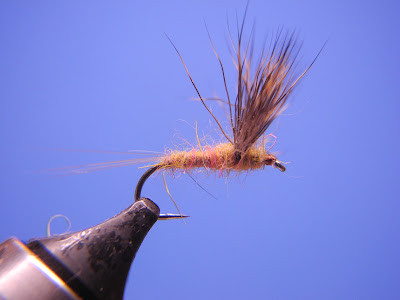 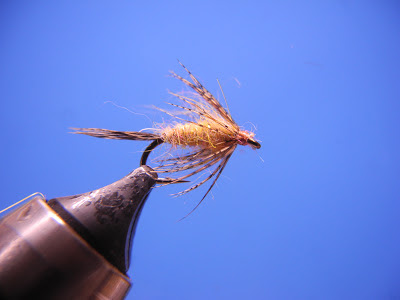 I had the pleasure of meeting up with Alan Small Stream Reflections and Kirk Trout Quest Redux for a late morning/afternoon of fishing for small stream brook trout on a perfect December afternoon. The morning started off chilly with the thermometer in my truck reading 25F when I left the house but the morning warmed as the sunny rose in the sky.  The bright sun felt good but made keeping our shadows of the water challenging at times.  It was a real pleasure to spend an afternoon with two guys who enjoy small streams and being outdoors in any season.


I fished a couple the pumpkin head and a soft hackle hare's ear combination but quickly realized there was too much weight for this small stream.  At one point Alan remarked they if we didn't catch any Pete was never going let us hear the end of it but no worries, everyone managed a few

The high points included Alan spotting a brook trout that was not interested in his caddis, but thought something black would do the trick and he was spot on.  I tossed a starling and herl over it and it charged it but I struck too soon and missed it.  We spotted many fish as we walked along indicating a health stream.  As the afternoon warmed, we enjoyed a rare treat, catching brook trout on dries in the middle of December.  The flies of the day included small black foam and elk hair caddis and some small #18 adams.

As we finished up by a bridge Alan remarked that a bugger would probably work really well in the pool below the bridge.  I pulled out my box and showed him a couple of small peacock buggers I used in the Adirondacks.  The second cast brought a nice rainbow to hand proving Alan right again.  We said our goodbyes and all left feeling like we had enjoyed a day well spent thanks to Kirk and Alan. 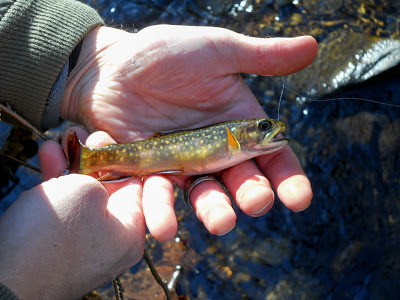 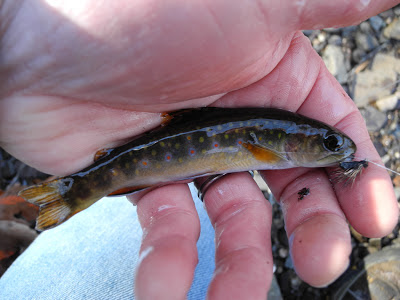 On the ride home the news of the terrible tragedy that rocked a local CT town was all over the radio.  Our thoughts and prayers are with all those affected, the families, the school children and the teachers, and those who were called to the scene to respond.  As president Obama said, "our hearts are broken".  May God's grace abound to all those who are very much in need of it in the days ahead.
Posted by MarkW at 8:47 AM 8 comments:

I'm starting a series of posts on flies that worked well for me in 2012.  First up is a classic wet fly that I did surprisingly well with throughout the month of March.  Spring in New England brings the first hatch of the season, the early black stones.  When fish are picking them off the surface they  can be difficult to fool with a dry fly, but a wet fly fished in the film and on the swing will do the trick since the skating movement of the naturals seems to be what draws the fish's interest.

I usually tie this fly on a size 16 light wire dry fly hook.  Another tip is too leave a good tag of thread off the back to wind back through the peacock herl to give the fly a little more durability.  The fly is finished off with a couple turns of starling hackle, the feathers with the green iridescent sheen.

Not only does this fly fool trout keyed into early black stones but will also fool trout taking black caddis, ants, or beetles in the summer months.  This is a simple and versatile fly throughout the season. 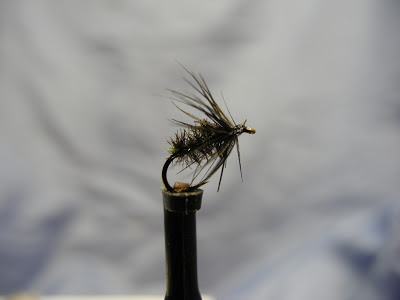 I really wanted to get outside for some fresh air since it's been too many days stuck inside.  This morning, the outside temp was 42F with a steady drizzle that started yesterday morning and is expected to continue for another couple days.  I decided it was just the day for a visit to a small stream I haven't fished since the summer.  The woods were quite, shrouded in a gray December fog, but couple of small browns were interested in chasing the bead head pheasant tail and partridge. 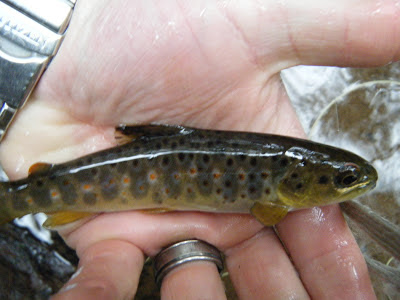 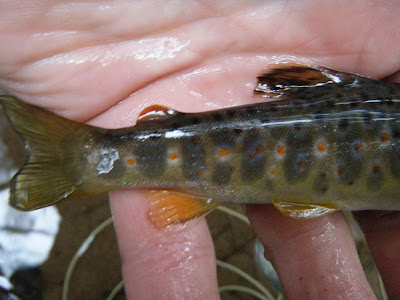 Tis the season for tying

With the colder weather closing in and the trips streamside become less frequent, my attention turns to tying.  In the winter months, I review my log book to see what patterns worked well over the last season so that I can replenish stocks of time proven patterns.  Here's and old favorite that has proven itself year after year, the pheasant tail and partridge with a copper bead.  I can never have enough of these as give a lot these to friends and people I meet.   The black version works well in early spring when the small black stoneflies are around.

My favorite way to fish this fly is to trail it off the bend of a large dry fly, but I also love to fish it in a brace of wets.  It even serves well as a dropper on a Euro nymphing rig.