Next up in the series - top flies of 2012 is the isonychia compardun.  The isonychia is a large mayfly that appears in late August and remains on the water through October in the northeast.  While you rarely see "hatch" with large numbers of insects on the water, you will see a couple here and there throughout late summer and fall.  Because the isonychia dun are so large (#10-12), at a time when most insects are small, and the fact that the fish are used to seeing them for a long time, they usually draw a response.  This past season, I caught fish on this large dry fly even when there were no duns around.  This fly is always in my box by the time fall rolls around and I fish it often.

For this comparadun, I use a spectrumized Mahogany Brown dubbing which is similar to the dubbing used on the Hendrickson comparadun but with less yellow and more gray, purple, and red in it. 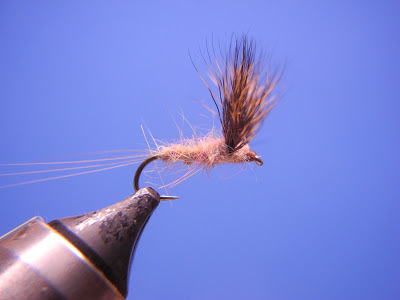