A little exploring with Kirk

I met up with Kirk (Trout Quest Redux) this morning for a little exploring.  The brook he took me to this morning ran through a laurel and hemlock forest.  I was a beautiful, warm, breezy day, a welcome change from the rainy, cold, weather of the last week.  The little brook had many interesting hiding spots but the fish weren't interested in the fly today.  I did manage a nice brookie in a sweet little tannin-stained pool on a #14 Usual.  When I went to take his picture, I realized my camera was dead.  I took it out last Sunday afternoon in the rain, I hope I didn't kill it in the damp weather.

This past weekend, I picked up my daughter from college in Memphis, TN and we drove back home to CT.    We spent the first night of the drive near the Great Smoky Mountain National Park and so had planned to do a short hike in the park before driving back.  It was a clear, COLD morning when we arrived at the trail head.  This was our first visit to this beautiful national park.  Here are a few pictures we took along the way...

I was out Monday and Tuesday afternoon to take advantage of the Hendrickson hatch.  It must be winding down since there was only about a 15 minute hatch on Monday and nothing to speak of on Tuesday.  But the fishing was still off the charts.  Monday I met up with Ben from the leaper blog.  There was a brief hatch and I could see some noses taking duns in a soft eddy behind a large rock in some heavy water.  After readjusting angle and approach to get an acceptable drift with the Hendrickson comparadun, a pair of nice browns were in the net.

After the brief hatch, I took the Euro nymphing rod and worked the slots in the fast water and picked up a couple rainbows and another brown. Mid afternoon a bald eagle flew overhead with a brown trout in it's talons.  He made graceful, banked turn showing off his wingspan and white head in the clear sun, a truly impressive sight!  Later the beavers and the waterfowl made their appearances  as well.   Ben opted to stir things up with a "gurgler" and entertained both of us  watching the big browns mash the noisy mess of a fly.

After fishing hard all afternoon, I sat down for a rest and waited to see if a spinner fall would occur.  I was hopeful since I had been seeing them most of the afternoon.  As the sun set, the sky filled with egg laying spinners and the trout were taking them with abandon.  The water was being covered with so many spinners that trout were taking the naturals within inches of my fly.  As the light was fading and things wound down, we both had battled and landed quite a few of hefty browns.

Tuesday, I decided the head upriver to see if I could catch the Hendrickson hatch.  There were very few Hendricksons in the air but fish were still rising.  Based on the small dimpled rises, I guessed that there were probably taking olive emergers.  A size 18 olive comparadun was what they were looking for and I was able to land a handful of browns and rainbows.  At one point, I hooked three fish on three consecutive casts.

At 4PM, I headed back to the spot I was in the night before.  The upper run covered so I picked a good spinner location and swung a bead head pheasant tail soft hackle and picked off a nice rainbow. 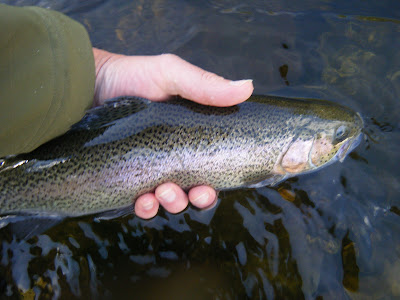 As the sun went down, the wind that had been blowing most of the day died down and the spinners started coming in mass.  It was another stellar evening of spinner fishing with too many fish to keep count to the next and one brute that I got within arms reach before the spinner popped out of his mouth.  Several of the browns were around 16" or better with nice copper colored flanks

Two amazing days of fishing that I will remember for quite some time !
Posted by MarkW at 4:25 PM 15 comments: 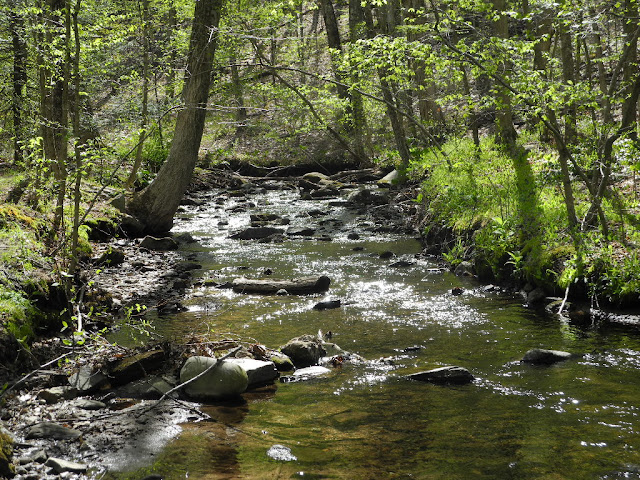 It was another beautiful May Sunday afternoon here.  The sun was shinning in a cloudless blue sky and the wildflowers were in full bloom along the woodland stream.  There's nothing like the warm spring sun, a small brook, and a few hours of quite to restore the soul.  David said in Psalm 23; the Lord my shepherd "leads me beside the stilled waters, He restores my soul" and that was certainly my experience this afternoon.  I am so thankful for the chance to spend these quite Sunday afternoons out in God's marvelous creation!

I fished two flies, Fran Better's version of the parachute Adams (woodchuck guard hair for the tail and muskrat fur for dubbing) and a tan Elk hair caddis.  The brook trout were all over both flies sometimes taking multiple whacks at the fly as it drifted by.  I'll let the pictures say the rest... 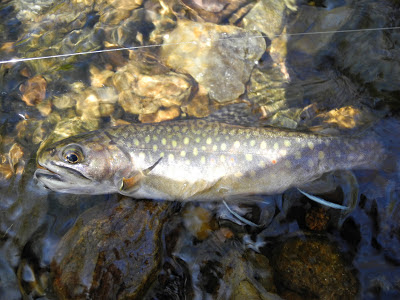 
Alan and I met on the Farmington River this fine spring afternoon.  The sun was shining and I had high hopes of showing Alan what fishing during a Hendrickson hatch was all about.  After discussing our options we headed toward a couple spots that I had not fished yet this year.  Two guys had the first spot locked down, so we moved upstream to a place Alan was familiar with.  We fished it for a while with no signs of fish so we drove upriver to another spot.

The prime spot was taken, so I headed up to the faster, deeper water and Alan headed downstream.  The hatch materialized on time but the rising fish were up tight to the opposite bank with heavy water between me and them.  I just couldn't manage to get a decent drift no matter what angle I tried.  I did manage one brook trout on the wet and hooked and quickly dropped two more on the wet swinging it through the softer water.  "Swing and a miss" turned out to be the theme for the afternoon!

After the hatch wound down, I suggested we try one more spot.  Alan managed one in the new location on a wet and I fished a spot below him and managed a rainbow which didn't make it to the net and very nice brown on the comparadun.   I ended up Euro nyphming the spot and hooked three more but only a fat 16inch rainbow made it into the net and then shot off before I could take it's picture.

It was a nice day to be out fishing some new spots (to me) with Alan.  Even though only three fish made it to the net with lots of misses, it was nice to get the hat trick with three quality fish.
Posted by MarkW at 9:27 PM 14 comments: