Before heading out morning, a quick check  indicated 1 inch of rain fell in the area I wanted to fish.  I wasn't sure what I was going to find, but being smaller stream, I figured it was my best chance to fish today.  The water was very high and off-color and not looking all that encouraging and a thick humid fog hung over the forest.

I figured these were conditions for the mini muddler and end up fishing it most of the morning and the brook trout were taking it with abandon.  Several launching themselves out of the water.  One pretty little wild brown was in the mix this morning, I don't see many browns in this section of the stream.  Several times I switched over to an Ausable Bomber just to see but the fish had a strong preference for the mini muddler.  The morning turned out a lot better than I originally thought after seeing the swollen stream. 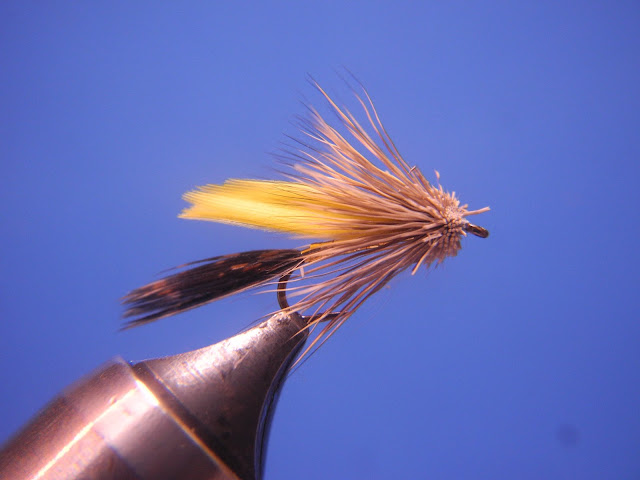 Couple of tips for tying the mini muddler...  Tie in the matched turkey tail feathers and gold tinsel at the rear of the hook.  Trim the tinsel tag and the turkey up at the front of the hook were you want the body to end.  Tie everything down tight with a nice even thread body for the tinsel.  It makes wrapping the tinsel much easier and even.  When I tie the head, I put a smaller bunch of deer hair under the hook and tie it in and flair it much like an elk hair caddis wing, then add a larger bunch on top, tie it in, flair it, and then take a wrap or two to spin the deer hair.  Don't use too much deer hair for the head.  I like to trim the head with a double edged razor that I bend by applying pressure to the end with my thumb and middle finger.  Tie some up and have some fun with them!

Kirk and I met on Friday to fish a stream I haven't fished since last winter.  The brook was bank full and slighty off color, and when I met Kirk he had fished a bit with no interest.  He remarked that we should try something bright and colorful.  After I drifted the Ausable Bomber through a riffle that always holds fish, I knew he was right.  I traded the Bomber for another one of Fran Better's patterns, a yellow winged mini muddler.  Drifting through the same riffle brought several responses.


The mini-muddler produced pretty wild browns all afternoon.  The fish took it sub-surface, on top, on the retreieve or dead drifted.  I don't know if the fish thought it was a grasshopper, large caddis or who knows what else.

Got the chance to get out this morning and fish with Alan and Kirk.  The guys had a good idea of where we could avoid the intense run-off we've had over most of CT after this week's rain and we enjoyed a good day of fishing for wild brookies with a couple of wild browns thrown in.  Sometimes the higher flows move the larger fish out into the accessible feeding lanes and that was the case today.   Before Alan and Kirk arrived I tied into a good sized wild brown on an Ausable bomber holding close to the bank.

I fished the bomber most of the day and lots of brookies were interested in attacking it, including a few who cleared the water and nailed on re-entry, but the Usual, and the Royal Wulff also drew interest .  Alan and I ended the day exploring a brook recommended by Kirk that neither of us had fished before.  There was some very nice looking water with lots of deep holes to hide good sized fish and we will have to go back and explore some more.

Don't forget to toss your number into the fly line give away from Risen fly (see post below)...
Posted by MarkW at 9:49 PM 16 comments:

Well the spring rains have come (late) and it will be a few days before the rivers return to fish able levels and even the small brooks are roaring this morning.  So... it's a good time for a gear preview and giveaway.

I've been looking to set up a light 4wt for fishing dries and wets on the larger water I fish.  I've settled on the TFO BVK 8'6" 4wt and was looking for a mid arbor reel that would balance well with it.  I contacted Ryan at Risen Fly and was interested in what they were doing and in particular their Ichthus 3/4 reel.  The reel arrived a week or two ago but I haven't had a chance to try it out since I am still waiting for the rod.  I'll give a full report when I've had a chance to really test it out.  But here are a few pics of the reel which looks and feels very well made at a very affordable price (Ryan is running a 30% discount on the reels which normally sell for $98).

Ryan also sent two weight forward 3wt lines in green for any of the folks who regularly read this blog, to try out.  So if you are interested a free fly line, just leave a comment with a number between 1-25 and I will pick the two closest to the number I have mind and send the fly line out to you to try and please check out the products over at Risen Fly 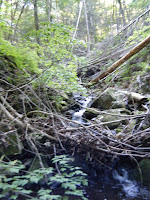 This evening after work I finally paid a visit to a small brook I've been wanting to explore for some time.  From the contour lines on the map, I knew this brook was going to have a steep gradient and I was not disappointed.  I think this brook has one of the steepest gradients I've ever fished.  Moving along this brook required a good deal of concentration as one false step would mean a lengthy tumble for sure and the steep walls of the ravine were littered with massive blow downs.  The brook was one small plunge pool after another and there were quite a few small brook trout willing to slash at my Ausable bomber as I dabbled it in each mini waterfall.

There were a couple more size able brook trout that I briefly hooked in some of the plunges.  It's too bad I didn't have my Nikon P7000 with me to get some decent shots of the terrain, it was really something to see.  Unfortunately, my small waterproof camera doesn't take very good shots in low light and many of the pictures were of very poor quality. 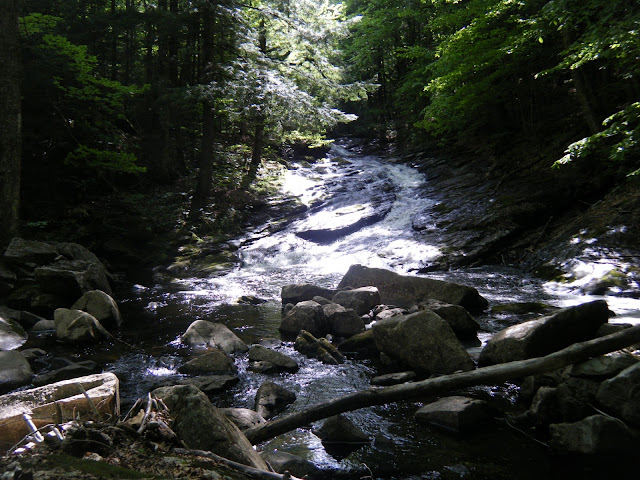 This was my first trip to a favorite Adirondack Brook since the trout season opened in New York.  I love this brook for it's lovely plunge pools and the rugged country it runs through.  Several short lived thunderstorms rolled through the mountains in the morning.  The humid air was filled with the fragrance of a damp pine forest and the music of many tiny rivulets carrying the morning's run off.

The fish were not interested in the usual dry flies, most likely holding closely to the bottom of the deep plunge pools. A few brook trout were brought to hand using a weighted mini peacock bugger.  There were several interesting wildflowers in bloom along the brooks bank.  It was wonderful to be out in the Adirondacks again far from traveled paths.