What a tremendous day we had yesterday in CT!  With air temps in the upper 70's, clear and no humidity is was a day to be enjoyed so I made the necessary arrangements and took the afternoon off.  I met up with TROUTI and we decided to work a couple different sections of the river.  I chose a riffle filled section that I could run a large stimulator through to see if I could find an opportunistic brown and boy did I !  That brown came out of a 1-2 foot channel and torn the stimulator off the 4x tippet like it was spider silk!  I nymphed another favorite run that has not produced very well this season but I did manage a nice rainbow.


After checking in with TROUTI, I headed up river to another favorite spot to see what the close of the day would bring.  There were fish sipping something that I could not figure out but I did fool a couple browns on a rusty spinner and an iso comparadun.  I saw a few sulfurs in the air around 8 PM and put on a sulfur comparadun and took a few rainbows before dark and then everything went quite.  I wasn't sure if things had shut down for the night but I waited it out and sure enough things turned around as the darkness settled in.  I put on the usual at the end of the 4x tippet and had a blast catching rainbow after rainbow in the dark.  Some took on the drift and others took it on the swing.   Near the end I was just fishing by feel.  This is why I had come and I was thankful things turned around at the end and made the waiting worth it.

In addition to fishing, there are other things I also enjoy and one of those is hiking.  I love climbing up a mountain and look down on God’s wonderful creation.  Sometimes I just need to get above the daily difficulties of life and see things from a larger perspective and hiking allows me to do that.  The other reason I love climbing is that my oldest daughter likes to climb mountains too and it has become one of those things we share together.   This summer we’ve been in the process of climbing every mountain in Hamilton County with a fire tower on it.  There are five in the county and it’s been fun to learn about the history of these towers and the people that sat up in those towers keeping watch over the forests below.


This past weekend we climbed the last of the five towers and it was a quite an experience.   We had left the largest tower on Wakely Mt for last.  This tower is the second tallest fire tower in the state of New York and was one of the early “light” towers installed in the Adirondacks.  These light towers where originally installed with just a ladder on the outside of the tower as opposed to tower with an internal staircase.  I can’t imagine anyone climbing a 65ft tower with a light aluminum ladder on the outside in wind or freezing rain.  Apparently the ladder only lasted a couple years and was replaced with the more common internal staircase but the tower footings were not strong enough to support the weight of the staircase so additional footings were installed.

My first glimpse of the tower made me a little queasy.  The first thing my eye saw was a cab that looked a little neglected and had no wire safety fencing around the last landing and an exposed ladder up into the cab.  Somehow my daughter convinced me to go up and have a look and we did indeed climb up into the cab.  That was an experience I will not soon forget.  Standing up in the cab you could feel that whole tower swaying in the wind, so much so that I couldn’t get a decent reading with my compass!  After looking around and taking a few pictures we very CAREFULLY climbed down.


But you can't beat the view you can get from these towers.  Even though it took a lot of effort to man these towers you get sense of how addictive these views can be.

I was curious about the advantages of furled leaders so I decided to order a few from Ben at Arizona Wanderings.  After casting a bit with his 5 and 6' leaders I was really impressed with how the leaders turned over and the fact that they didn't kink or wind back on themselves.  The added advantage of having a tippet ring for easily changing tippet was also another real advantage.  I had experimented with braided leaders a couple of years ago, and I was not impressed.  The loop to loop connection for leader to fly line and leader to tippet just resulted in too many loops and would often cause casts to curve off target.

So I fished the 5ft leader with my favorite small stream rod (Cabela's custom glass 5'9" 3wt).  The leader was a dream to roll cast but was a bit long for the tight quarters on some of the small streams I fish.  So I decided to jump in with both feet and build my own 48" leader.  After doing some research, I built and jig and found a leader formula to start with.  After going through an entire spool of 6/0 uni thread, I finally managed to get the hang of winding the leader, getting the tippet ring on, furling the leader, and tying it off with a shorb loop.  I'll be messing around with these some more, building several length leaders for different waters that I fish.  If you haven't tired a furled leader, I would recommend you give it a try and see whether you like them too.


With a hot muggy day in store for Sunday afternoon, I decided to head to nature's refrigerator after church. The upper trout management area of the Farmington River is one of the coldest places I know in the summer. The Farmington is a tailwater and so the water temperatures stay cold during the hottest days which sets up the surreal natural refrigerator.  The cold water, cools the air just above it resulting in fog layer where the cold air meets the hot humid air of a typical summer day.  In the fog layer it can be nice and cool and I was wearing a jacket even though the air temps were well into the 90's.


I started out the afternoon Euro nymphing since not much was happening on top.  A little wild brook trout started the afternoon off, followed by two fat rainbows that were not happy about being held for a picture, and a brown.  Rich Strolis' Super Simple accounted for the brook trout and two rainbows and the brown took his Rock Candy.


Sulfurs started coming off sporadically around 6:30, so I had the chance to try out the new TFO BVK 4wt with the Ichthus 3/4 reel.  The combination worked really well together and was super light.  I was able to lay out some really nice casts and managed two more browns on a sulfur comparadun.  When I've had a chance to use this rig some more, I'll write a review.  But the I was very pleased with the first outing.


I stayed late to see if things would really get going.  There was more bug activity around dark but only a few fish rising to them.  I managed to break two off in the dark using the "usual" on 5x and a third fish threw the hook in mid air.  All said, a great way to spend a Sunday afternoon staying cool.
Posted by MarkW at 8:05 AM 10 comments:

Just back from spending a few days in the Adirondacks.  I did manage to get out one morning for a little fishing.  The past couple weeks have seen a lot of rainfall in the Adirondacks.  The lakes and streams are running at levels usually seen in late spring when the snow pack starts rapidly melting.  All the rain is keep the forest very damp and the mosquito population booming.


Despite the high water levels, the brook trout were still eager to take the lime royal wulff.  It was fun watching the brook trout rise out of the depths as if they were on a search and destroy mission.  I did fish the Ausable bomber a bit, but the bright chartreuse band on the royal wulff seemed draw more attention in the  tannin stained higher than normal flows.


I find the wealth of color in God's amazing creation to be fascinating.  Here are just some of the many colors to be seen in the Adirondacks this time of year...Enjoy 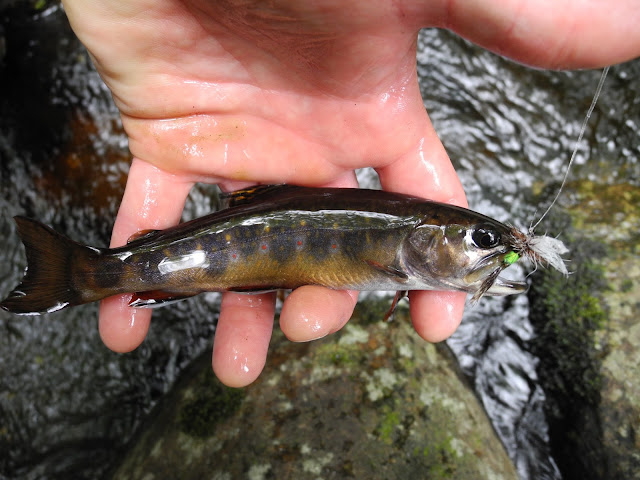 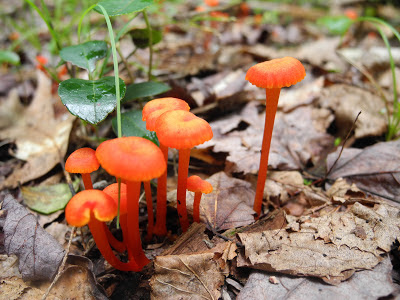 Today, we Americans celebrate the anniversary of our Independence from Great Britain.  The spirit of self-determination is inbred in the American DNA.  The desire for self-determination propelled the first settlers to brave the harsh New England winter seeking the opportunity to worship God according to their consciences.  That same spirit stirred the colonists to insist that if they were to be taxed as English citizens then they should be represented. Happy Anniversary America! 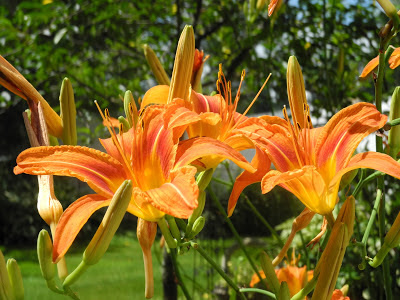 This time of year tiger lillies are blooming by every roadside and bare patch of earth with a little sun.  It's amusing to observed how widely these hearty "independents" are distributed by the local squirrel population.

I thought I would celebrate the day by catching a few red, white, and blue trout.  The brook was surprisingly low given all the rain we've been getting and the fishing was slow.  The yellow muddler was largely ignored but given the low water, I suspected a smaller fly would be a better choice.  The first brook trout of the day took a yellow parachute.


Further downstream, another brook trout swirled around the parachute but refused to resurface.  I switched to the Charles Cotton Black fly, recently described by Regular Rod on the Dry Fly Expert blog and a nice brook trout decided it was to his liking.


The black fly accounted for a handful of brook trout before the humidity and heat persuaded me to quit.