I took a quick trip to the Farmington River to get some fresh air and enjoy the warm fall day today. The fishing was generally slow, but I did manage to find some fish later in the day rising to tiny olives.  A pair of browns were were hooked using a size 24 unicorn, the pattern and recipe are shown below.  This pattern is very simple; just thread a couple fibers of emerger yarn for a tail and white foam wing to see it and keep the body in the film.

We arrive at camp around 6PM, got set up and quickly settled in.  The temperature was dropping and the winds were picking up and the tent and sleeping bags were a warm refuge from what was going on outside. The wind howled all night and I was hoping for some clearing for a good day of hiking.


Next we drove west to Newcomb, NY to view Tahawas (the Indian name for Mt Marcy which means "cloud splitter") and Indian Pass from the south.  Legend has it that the Indians came into the Adirondacks through Indian Pass to hunt but did not live in the mountains.  The distinctive structure of Wallface Mt and Indian Pass are landmarks that are easily seen from a distance.


We made one final stop in the abandoned town of Adirondac.  This town was built when iron ore was first discovered in the region in 1826.  A blast furnace was constructed of stone and operated successfully for around 30 years but eventually, the remoteness, brutal winters, and the presence of titanium dioxide in the ore which could not easily be removed with the technology of the day shut down the furnace and the town. It was in this town that Teddy Roosevelt, who was hiking on Marcy, learned of President McKinley's eminent death.  Roosevelt was rushed to Buffalo where he was sworn in as president.

Fall in the Adirondacks

This post is a quick "teaser" of sorts. A good friend of mine and I just got back from a couple days in the High Peaks region of the Adirondacks.  I am really fall in love with this region of the Adirondacks and this last trip has just fueled the fever. This trip was primary a hiking trip but since we were up in Ausable country, I did manage a couple hours of fishing one afternoon. We arrived around dusk the first night to a cold front blowing through that brought temps in the low 40's and strong winds all through the evening and the next day. The next day it was raw, with temps hovering in the low 40's, overcast skies and drizzle hanging on the tops of the peaks, and lots of wind.  We spent the day driving around and doing some exploring.


I fished from about 4pm to 6pm around Shadow Rock on the Ausable.  Despite the tough conditions I did spot some fish rising.  I started out with an iso comparadun with an iso nymph dropper.  Within 5 minutes, I hooked a big brown that took the nymph and ran hard for the tail of the pool.  I managed to turn him before he headed downstream and out of the pool but he managed to find some jagged rocks and snag the line between them.  I tried to go after him but he managed to break the dropper off before I could get to him.  No worries since there were still rising fish working, so I focused on fishing the comparadun and hooked another nice brook trout that promptly headed for the bottom and pulled the same trick! I guess fish are smatter in the adirondacks (I think Fran Betters wrote a book by that title). Working a little upstream I managed to spot another fish poking his nose out and hooked a second brown on the comparadun that also managed to unhook himself.  It wasn't a great day for catching but I was pleased to hook a few decent fish under rough condition on a river that is very new to me.


I will be going through the 75 or so pictures I took over the last couple days and putting up a few posts of some of the amazing vistas we visited over the last few days so I hope you will stay tuned.
Posted by MarkW at 10:34 AM 8 comments:

Well today I had the chance to finally do something I wanted to do for a while, take a two handed casting lesson.  Jerry, Fred, and Mary of Spey Casting North East provided the equipment and some excellent instruction.  I can't say enough about their instruction and friendly, encouraging attitude.  They really explained the mechanics of the cast and the role of the anchor so that we when went to the water things really came together for me.

They had me doing a decent single spey, double spey, circle C, and even an upstream perry poke.  It was a blast and I was totally hooked on this method of casting.  Now all I have to do is find a rod and getting in some practice before the broodstock salmon season in CT !
Posted by MarkW at 12:14 AM 2 comments:


Yesterday was the last of the "summer Fridays" at work.  For the past several years my employer has let us work an extra hour Monday to Thursday and take a half day on Friday during the summer.  This opportunity has enabled me to fish on Friday afternoons without taking a vacation day.

Friday was cool with the temps barely making it into the 60's.  Not only was it a farewell to summer Fridays, but it was a fitting farewell to summer in general.  I love being outdoors on these cooler days and am looking forward to the coming fall.

My plan was to move around a lot, to fish big dries and Euro nymph some faster water.  At the first location, I saw a good number of isonychia coming off, which was good sign.  I fished the iso comparadun and a parachute Adams and had several brief hookups and one brook trout on the Adams.


It seemed like the fish were tentative with taking the dry.   I then turning the Euro rig and worked the same area.  On one of the first drifts through a nice slot, I saw the line stop.  At first it felt like I had snagged the bottom until the bottom starting heading for the opposite bank!  I think it was a large rainbow since I saw some red on the flank.  After a charging run into some shallow water the fish managed to toss the hook.  A couple more wild browns were taken on the smaller DDT dropper.


Towards evening there were more isos coming off mixed with some white flies (#14), caddis, and olives coming off but not much interest from the fish.  I finished up the evening with the iso comparadun but again had a couple brief hooks up but nothing to the net but it was wonderful day to be outside on this final summer Friday.
Posted by MarkW at 8:11 AM 12 comments:


Last week I visited my favorite Adirondack brook.  It was dry and in need of some rain.  I fished a Royal Wulff most of the afternoon and had many strikes and brief hookups but no fish wanted to come to hand for a quick photo.  It seemed like the fish were just nipping at the tail of the fly. 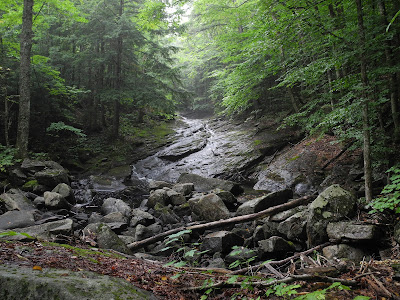 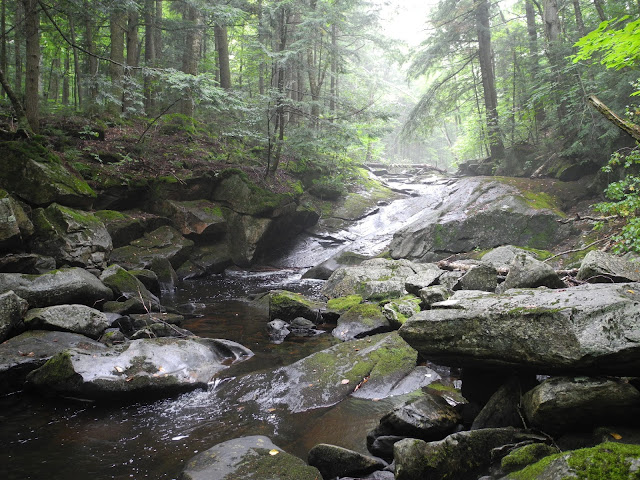 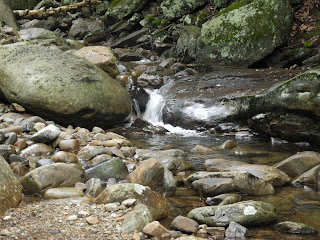 The following day, I headed to the other side of the mountain to fish an upstream section and found it too low to fish so I moved on to a brook I've seen before but never investigated. The difference between two brooks is pretty striking.

The brook pictured above is tanin-stained while the new brook pictured below was striking clear. There was plenty of water flowing and many very deep pools. 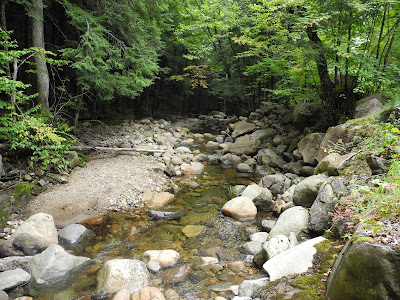 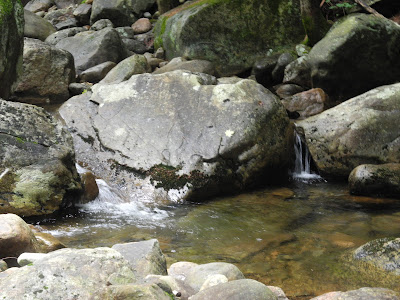 Many brook trout were hooked briefly and then off again but I did manage to bring one to hand to photograph.  I will definitely be going back to explore more of this lovely Adirondack brook