I haven't fished for broodstock salmon that much this year.  I've been out a couple of mornings for brief outings and have managed to see a couple of fish roll here and there.

With the daylight savings time coming to a close at the end of the week, I made a quick trip after work today and chose a section of river with a couple of runs close to each other.  I couldn't move anything in the first two spots.  In the last spot, with daylight fading, I got a nice tug on the Ally's Shrimp about 2/3's through the run.  I let the fish take a little line and then lifted the rod and could feel the heft of a decent fish.  The fish ran across the river towards the shore directly below me.  I put a little side pressure on hoping to solidly lodge the hook when the hook let lose. Disappointed that I didn't land the fish, I was still pleased that I was able to hook one.
Posted by MarkW at 8:52 PM No comments:

A blustery day on the Housatonic


This afternoon was one of those blustery fall days, with the temperature barely reaching 50 and windy.  Nevertheless, it was a great late fall day to be outside and what better way to spend it then standing in a river swinging wet flies.

I met my neighbor Mike late morning and we took a drive up to the Housatonic River in Northeastern CT. When we arrived at the river and found a good stretch of water to fish.  Soon after getting into the water we noticed some fish rising.  I started out nymphing but quickly realized that fishing wets was the way to go in the wind.  Switching over to a bead head pheasant tail soft hackle, I soon had the first fish of the day but it quickly came unbuttoned.  I stuck with swinging the PT soft hackle most of the day and managed to land a handful of browns.  Mid afternoon I switched to a # 22 olive CDC emeger and managed one rainbow.

I had thought that this might turn out to be a good day for swinging wets so I brought my 12' two hander along to get in some practice.  I was swinging a Mickey Fin when I hooked a rainbow and landed my first fish on the new spey rod.

The days are getting shorter this time of year and by the time the sun was going down, the cold was starting to take it's toll on legs and hands.  I've been saving a few vacation days for my favorite time of year, and today was exactly what I had in mind.  It was enjoyable day spent outdoors in good company.
Posted by MarkW at 9:32 PM 8 comments:

An Afternoon on the Housatonic

My calendar was pretty open yesterday afternoon and it's been a while since I've had the chance to do a little fishing so I called an audible and took the afternoon off to fish a river I don't often get the chance to fish. I met a couple of neighbors who I recently learned like to fly fish.  We started at a popular pool and were surprised how many other people had the same idea!  I thought for sure the river would be pretty deserted on a Tuesday afternoon.

There wasn't much going on in the first spot.  I had a couple good bumps on the bead head pheasant tail soft hackle but no hook ups so I decided to be a bit unconventional.  I tied on an iso comparadun with an iso nymph dropper even though by all accounts the isos are done.  I managed to fool one rainbow before we decided to move away from the crowds.  Before leaving, I did spot a couple fish sipping small olives in some slack water so I decided to see if I could fool one.  I put a nice cast over a decent sized fish in some shallow water.  I could see a bulge under the fly but no take so I decided to work another fish.  With some persistence I was able to hook a brown before moving on.

While there was a lot of activity at the first spot, it seemed like the rest of the river was devoid of everything but the odd photographer taking pictures of the beautiful fall colors.  We fished another section hard with little to show for the effort so I decided to go unconventional again.  I know the few risers I saw were taking olive emergers or spinners but I decided to try a caddis pupa fished dry.  After a few drifts, I hooked into another rainbow that put on quite an areal display before ending up in my net.

It was so nice to be out in the fall air, enjoy the sounds of the river, the colors of fall, and the company of some new friends.  Even though I had to work for the few fish caught it was a well worth the trip.   When the fishing is slow, remember to try the unconventional. You may be pleasantly surprised with the result!

Was not able to do much fishing lately, but did manage a little time at the bench tying up some October caddis patterns.  Here are three variations on the October caddis; the LaFontaine pupa; a wet tied in the north country tradition, and an elk hair dry. 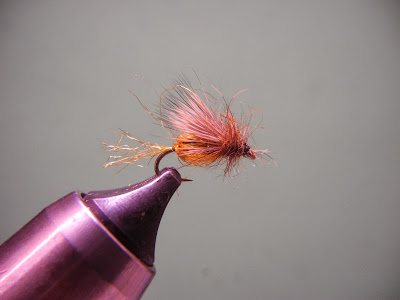 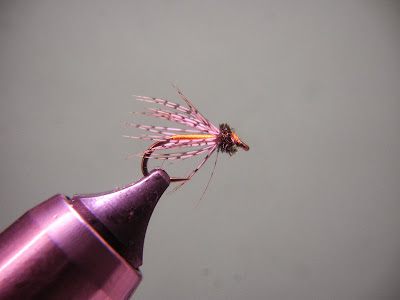 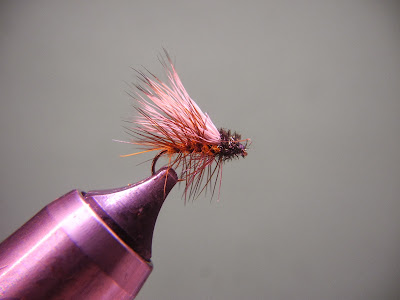 Here is the final installment of pictures taken during a couple days in the Adirondacks.  Day 2 started with a hike up Mt Jo.  As the mountains cleared the views were really opening up.  When we got back to Adirondac Loj it was a little after noon.  The day was turning out to a spectacular day and I wanted to get one more hike in before returning home.   Cascade was the plan but the estimated hike time was about 5h for the round trip and I would be starting around 1pm which would make for a late start home but I just couldn't resist the opportunity or the challenge of trying to get up and back in minimal time.

The hike up took 83 minutes, enough time to enjoy the windswept bare rock vistas and one of the best views of the High Peaks.  From Cascade I could see almost half of the 46 peaks with summits above 4000 ft. These aren't tall by western standards but as rugged as you will find anywhere!

Day 2 started with the promise of some sun.  It blew and howled all night long and again the tent and sleeping bags were a welcome refuge.  After some breakfast, the clouds started rolling in and Day 2 was not looking promising for some climbing and peak gazing.  We headed to Adirondack Loj with the hopes that things might clear on the hike up Mt Jo.


The ride into Adirondack Loj was a bit disappointing in that much of the High Peaks were obscured in low clouds.  We parked at the Loj and then hiked up Mt Jo, which is a short hike but offers one of the best views of the High Peaks from the north.  As we climbed it looked as if things might clear by the time we reached the top.


As morning passed toward mid day, we were able to enjoy some wonderful views from Mt Jo.  The great part of climbing this little mountain is that it puts you right in the heart of the High Peaks.  From Mt Jo it seems like everything is just an arms length in front of you.  With the clear afternoon, I had the opportunity to climb one more peak before we needed to head home so stay tuned.  In closing, I leave you with a panoramic from Mt Jo