The first wildflowers of spring

With gray skies and the water a chilly 42F, the fishing on the Farmington River was pretty slow but Pete and I managed a handful on wooley buggers with sink tip lines.  While walking to the first stop we fished I noticed a bunch of snow drops.  While these are not true wildflowers (they are transplants from Europe), they are nevertheless the first flowers I've seen growing in the wild this spring.  The earth is starting to awake from a long, cold winter 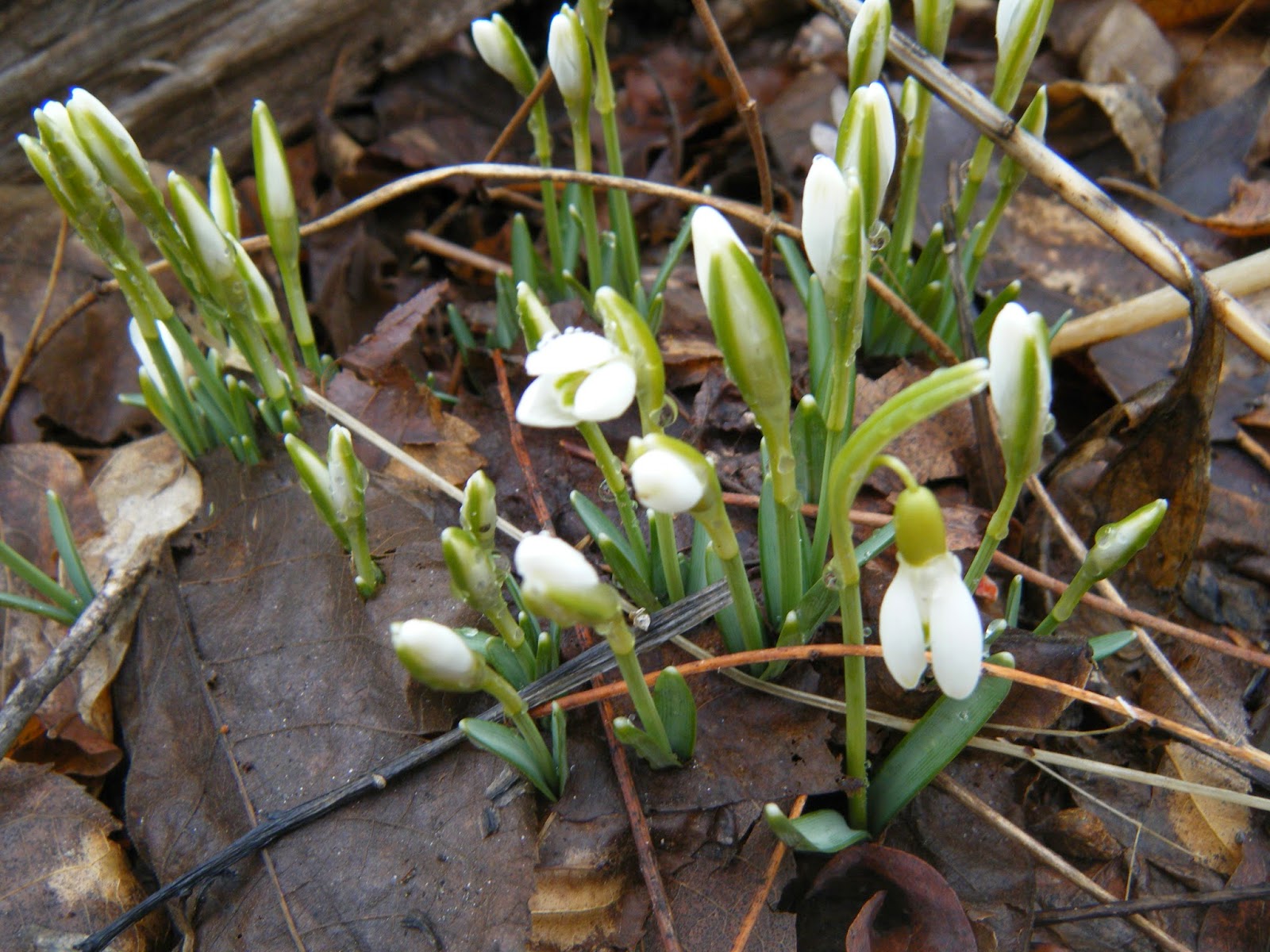 Wind knots and ice in the guides

You would think that by the end of March we would be finished with dealing with ice in the guides although we expect some windy days this time of year.  Yesterday both the wind and the temperatures conspired to make fishing seem like an insane proposition.  With temperatures hovering around the freezing mark and winds from 25mph to 40mph, it was going to be tough fishing. But then again, such conditions have a way of insuring that you certainly experience a measure of solitude and there is something to be said for the sense of accomplishment when you get out there anyway, undaunted by the weather.  How else can you explain why some of us fish all winter long?

After getting rigged and suited up I decided that today the best tactic would be to swing a brace of wets through the likely holding spots and cover a lot of ground.  I quickly discovered the only problem with that plan was the fact that the wind was throwing a lot of leaves into the water and almost every drift required removing the leaves hooked on the swing and then there was the ice in the guides to deal with.  Nevertheless, I was quickly into fish so I stuck with it.  I fished a black bead head pheasant tail soft hackle on point with a hare’s ear soft hackle as a dropper.  The preference was for the hare’s ear but fish were taken on both flies.

After about two hours in the cold wind, my hands were becoming unusable.  When the wind started really kicking up and bringing limbs down all around me, I called it quits and hiked back to the truck.  My hands had gotten so cold that I couldn’t release the clips on my wader suspenders.   It took about 10 minutes into the ride home before I could feel my fingers again but it was still fun to get out there and catch a frozen handful of browns and the odd rainbow fishing wets. 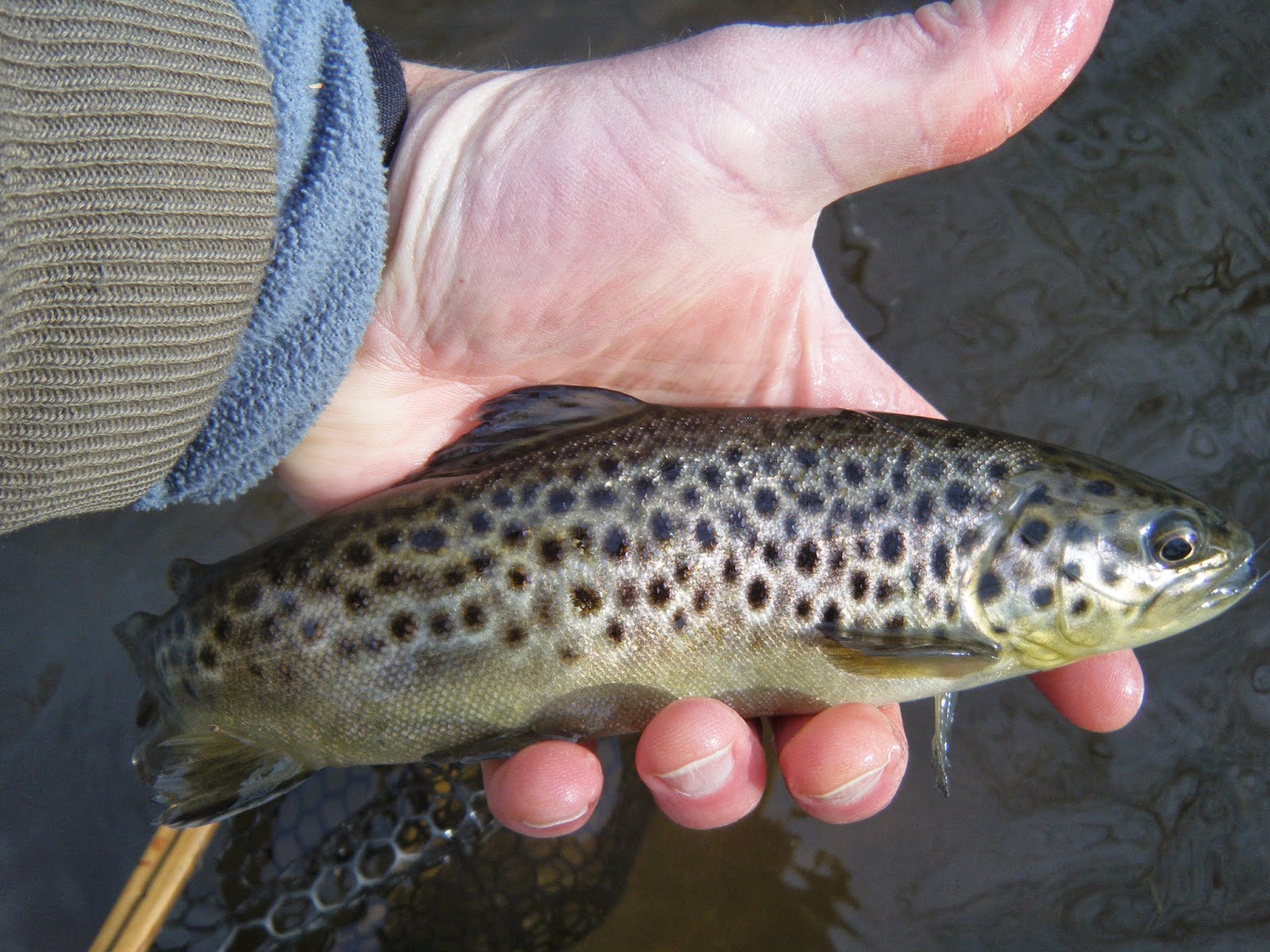 Some tying for the early stones

While winter seems to be making a comeback these days in New England, I remain convinced that spring will indeed come.  Some years it comes early and some years a little later. When March rolls around I begin to anticipate the first sign of rising trout usually to the early stone flies that hatch this time of year.  It really hasn't gotten going but they are starting to appear.  Here are a handful of flies I keep in my box this time of year.

Stonefly nymphs are active swimmers so a slow retrieve can be very effective.  I really like fishing a black version of the bead head pheasant tail.  The stoneflies in our area are usually around a size 16.  I use the mottled dark feather from an Indian hen neck for hackle since it resembles the mottled wings of these early stones.  A tungsten or brass gun metal bead version can be used for Euro or indicator nymphing.  This year I am experimenting without the bead both in black and brown (pheasant tail dyed dark brown) since the nymphs and undersides of some of the adults can be a deep mahogany brown.


Here is a link to trout working an early stonefly hatch, notice how the fish slash at the adults/nymphs at the surface and how the adults skitter over the surface of the water.  Don't be afraid to fish your dries downstream and give them a little movement or skitter them over the surface.

Yesterday afternoon I went to check in on a the trout management area.  These are the only areas open to fishing in CT until the season opens in mid April.  Water levels were very low and clear, which surprised me bit given all the snow we've had this winter (most is gone now) and some rain a couple days ago.

My plan was to euro nymph a couple areas and then see if I could find an odd riser taking stoneflies off the surface.  I did manage a good sized brown nymphing a deep run with a bead head pheasant tail and partridge soft hackle.  Moving upstream a bit, I was able to fool another good sized brown twitching a black version of the same fly.  I like using the black pheasant tail soft hackles in the spring when the early stoneflies are hatching.  I did spot the odd riser here and there and had a couple brief hookups but nothing to hand.  Then I spotted a brown crush a stone fly across from me, so I tried the peacock and elk hair caddis with no interest until I started fishing it down stream and giving it a little movement. Apparently that was the ticket and another brown was in net.  The first fish on a dry this month keeping my streak alive through another winter.  Despite the long cold winter, I think the calendar is correct, spring is here!

A Place for the big stuff


The only problem was that I needed a box that I could keep them in that had enough room to store them.  These streamers have a pair of large hooks so a box with slotted foam was a must.  There are a few boxes out there made for these large flies but they can be a bit expensive but Ryan over at Risen Fly offers a "briefcase box" that fits the need for $25/box.  If you are into fishing large streamers I would definitely recommend this box.  If you are interested in getting one of these boxes don't forget to use the discount code for fishingsmallstreams followers ("smallstream")

This week I have been looking at last year's log book and remembering some wonderful afternoons and dreaming of more of the same this month.

One particular late march afternoon with the air temperature pushing well into the 50's and the water still quite cold, I arrived at a favorite pool.  After some time observing from a downstream location, I could see a couple fish rising.  From the small dimpled rises, it appeared that the fish were taking small midges in the surface film.  This was exactly what I had hoped to find, so I quickly tied on a #20 Griffth's Gnat, one of my favorite small flies and slowly eased into casting position.  The small midge manged to fool a nice wild brown and then another.  After releasing the second trout, I noticed a black stone fly on my waders so I switched to a peacock and elk hair caddis and brought a third wild brown to hand before I needed to return home.  I remember leaving that afternoon satisfied to have found some nice rising fish.  I also remember leaving the pool with more fish rising and wishing that I could have stayed for another hour or two.

The memory of afternoons like that one beckon me to the same stretch of stream each march when the days start to warm up.  So with temperature rising into the 50's by late morning yesterday, I headed back again.  But while the air temperatures were warm, there was still a good bit of snow on the ground and the river was surprisingly low.  Yesterday there were no insects on the water and no rising fish.  I am sure that there will be fishing rising to take midges and stone flies in that same location again this year but perhaps it will be a few weeks later than last year so for now I will keep dreaming...
Posted by MarkW at 2:22 PM 8 comments:

As someone who enjoys fishing small streams, approach is something that must be constantly considered.  I grew up fishing small meadow and woodland streams with my grandfather.   The two things he insisted on when fishing these streams were drab clothing and a stealthy approach.   Drab colored clothing and hats blend well with the surroundings, particularly muted tones of green, brown, grey, and light blue.  On streams where the trout’s only protective advantage is flight, remaining unseen is a necessity.  This is even more challenging in situations where an upstream cast is nearly impossible and the angler needs to use the current to present the fly into protected feeding lanes.  It still surprises me how often I see a picture of an angler wearing a bright red or yellow shirt or hat in an article on fishing small streams.  Brighter clothing may not be so much of an issue on larger rivers where there is greater distance between the angler and the fish or in high gradient streams where it there is a natural “ladder” in the gradient and fishing upstream with a low profile is easily accomplished.  But more often than not that a bright shirt or hat is easily perceived by the fish and they are on the alert to your presence.

Another consideration is your approach to the stream.  You can’t expect to remain unseen if don’t carefully consider your approach and how you will present the fly.   We often would crawl into position to keep a low profile using trees or brush to hide our approach.  You just can't careless walk up to the edge of a small stream and expected to go unnoticed.  If you are careful and stealthy in your approach you can reduce the distance between you and your fly and more effectively place it where it needs to be.  Once these skills are part of your thinking your approach on larger rivers will improve and you can cut down the distance between you and your target.

So the next time you are thinking about fishing a small stream consider how well  your clothing blends into your surroundings and keep a low profile.  Fish are very adept at picking up movement and color in their surroundings.
Posted by MarkW at 6:53 PM 8 comments: