This morning the rain was coming down pretty steady but the weatherman said we might have a window of dry weather in the afternoon before more rain moved in later.  I left the house in a pretty steady rain trusting in the forecast and a look at the radar and drove up to the Farmington river. 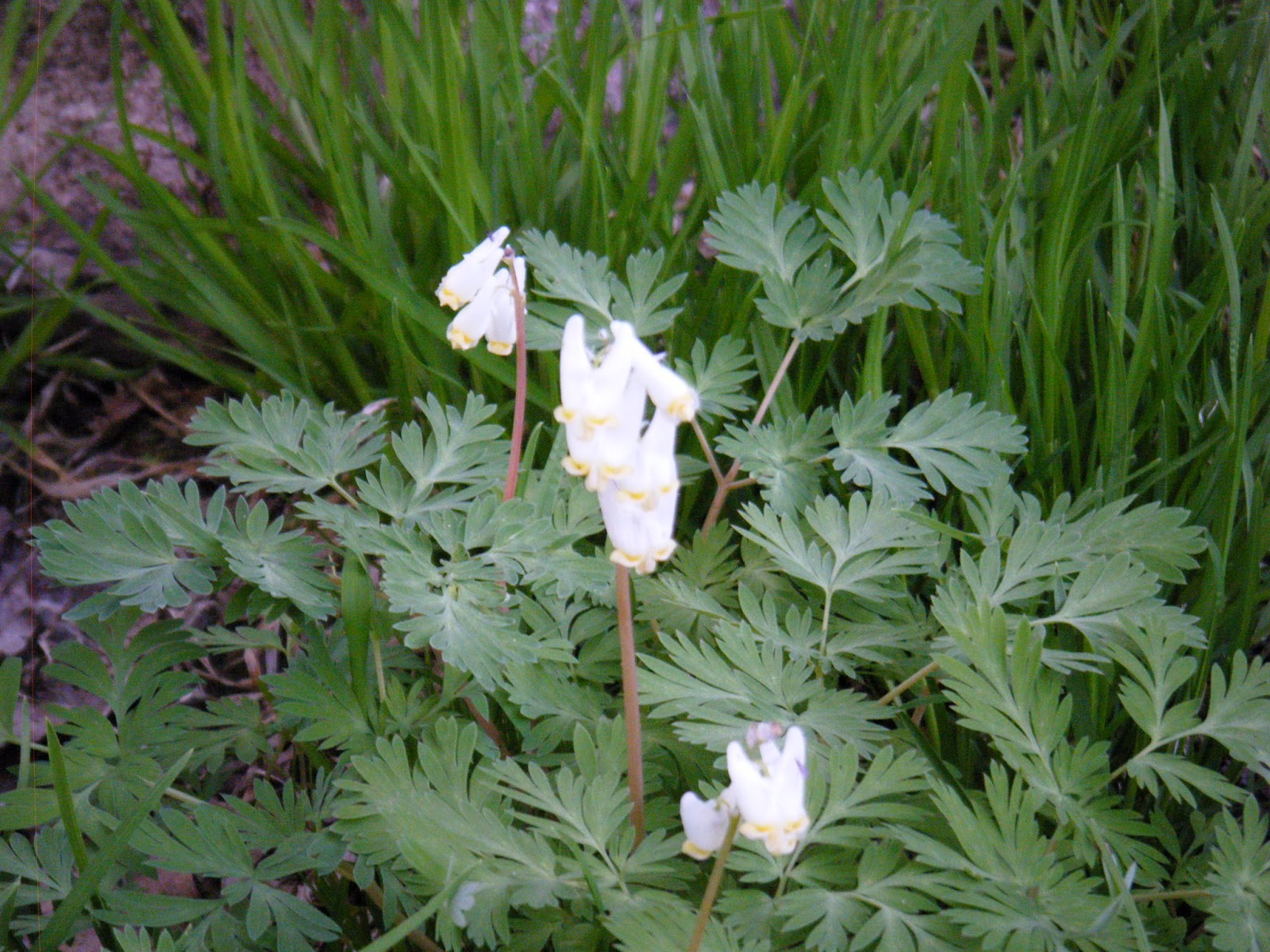 In the first location I didn't get any interest but did see lots of Dutchman's Breetches blooming. I am seeing more and more wildflowers bloom with each trip out.  The water temp still hasn't it 50 so the Hendrickson's haven't started yet but I did see lots of olives.

With a few hours left to fish, I headed upriver to a favorite spot I haven't fished since the fall.  There was a healthy flow and I started seeing lots of olives coming off, although I only saw one fish rise.  I was nymphing with a large weighed hare's ear on point and my favorite olive nymph, the bead head pheasant tail soft hackle, as the dropper.  I quickly hooked two fish on the dropper and snapped the tippet knot on both fish, where I leave a tag end for the dropper.  The third knot held and I had a long tussel with a bulldog of a brown that didn't want to quit.

I worked a short stretch of river and managed some nice browns in the 16"-18" and a odd rainbow as well as a handful of brief hookups.  Most off the fish took the pheasant tail but one brown took the hare's ear and one of the misses was on the point fly as well.  By the time I got home it was raining again.  I wasn't sure how the day was going to turn out, but I was thankful for a couple peaceful hours on the river this afternoon.

One if by land, two if by sea?

So what does reference to Paul Revere's midnight ride during the American revolution have to do with fishing?  Well it's a bit of a joke around our house this time of year.  My wife and daughters think it's funny that a grown man gets excited over the annual arrival of an insect.  They giggle as the repeat "the Hendrickson's are coming!, the Hendrickson's are coming!

Well, I do look forward to the time when the Hendrickson's appear because experience has taught me that these large mayflies offer some of the best dry fly fishing of the season, especially if you are on the water when a decent spinner fall is in progress.  They haven't appeared yet but I'll be ready and waiting.

The trout season officially opened in CT today.  In years past, I've opted to stay at home since  I don't enjoy the crowds or watching buckets full of fish taken from the rivers. Alan and I thought it would be far more enjoyable to mark the opening of the small streams, which have been closed since the end of February, by fishing a tiny wild trout stream tucked away from all the opening day attention.  This morning had the typical New England chill of a spring morning but the bright sun quickly began to warm to earth.  Alan and I met along the stream and Kirk was able to join us for some late morning fishing. 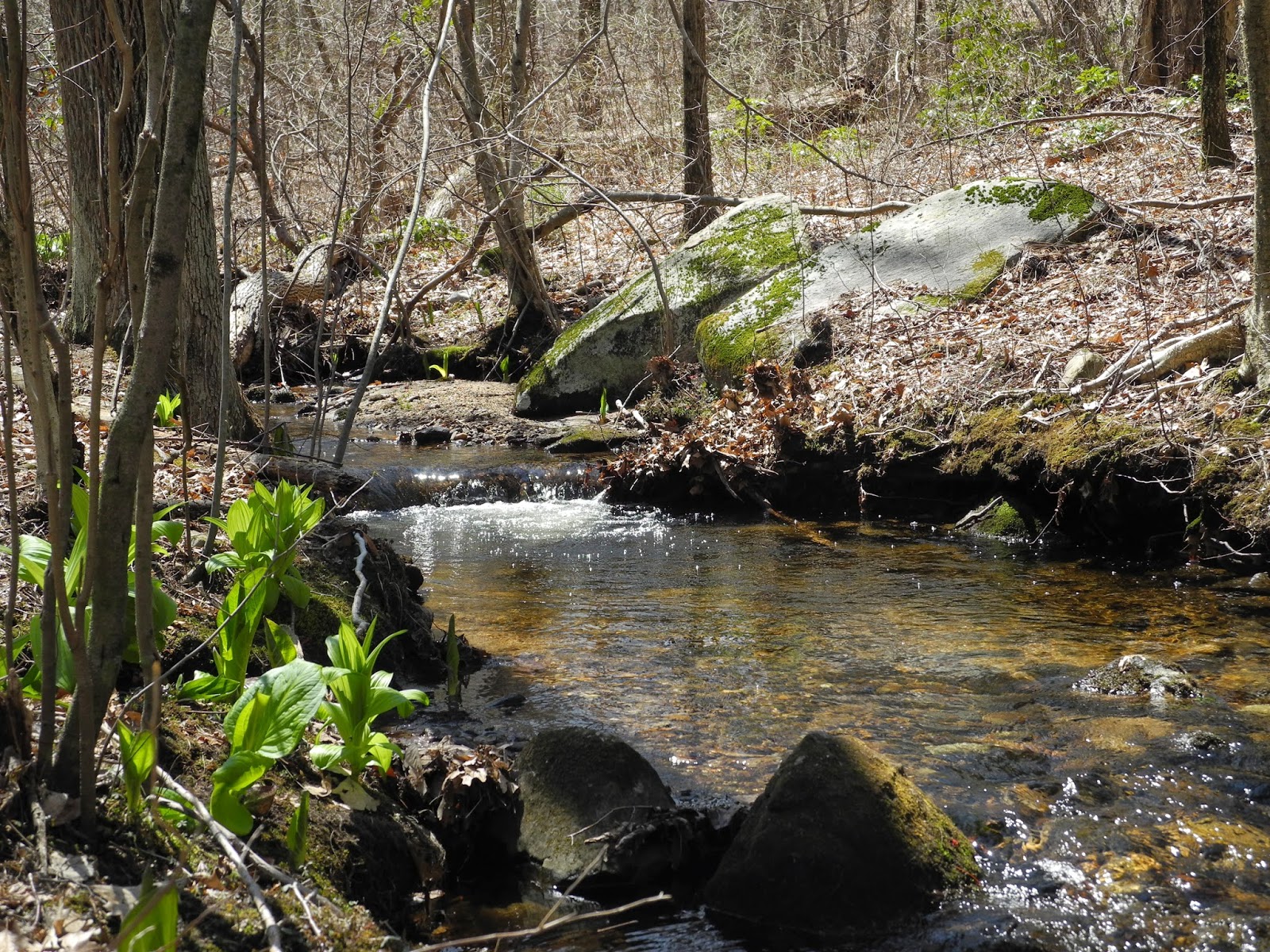 I was fishing a bead head pheasant tail soft hackle and had a couple small trout on briefly but that was it.  We decided to take a break and enjoy the warm sun, some coffee, muffins, and conversation.  After a little break, Kirk needed to head home and Alan I decided to head to another location. 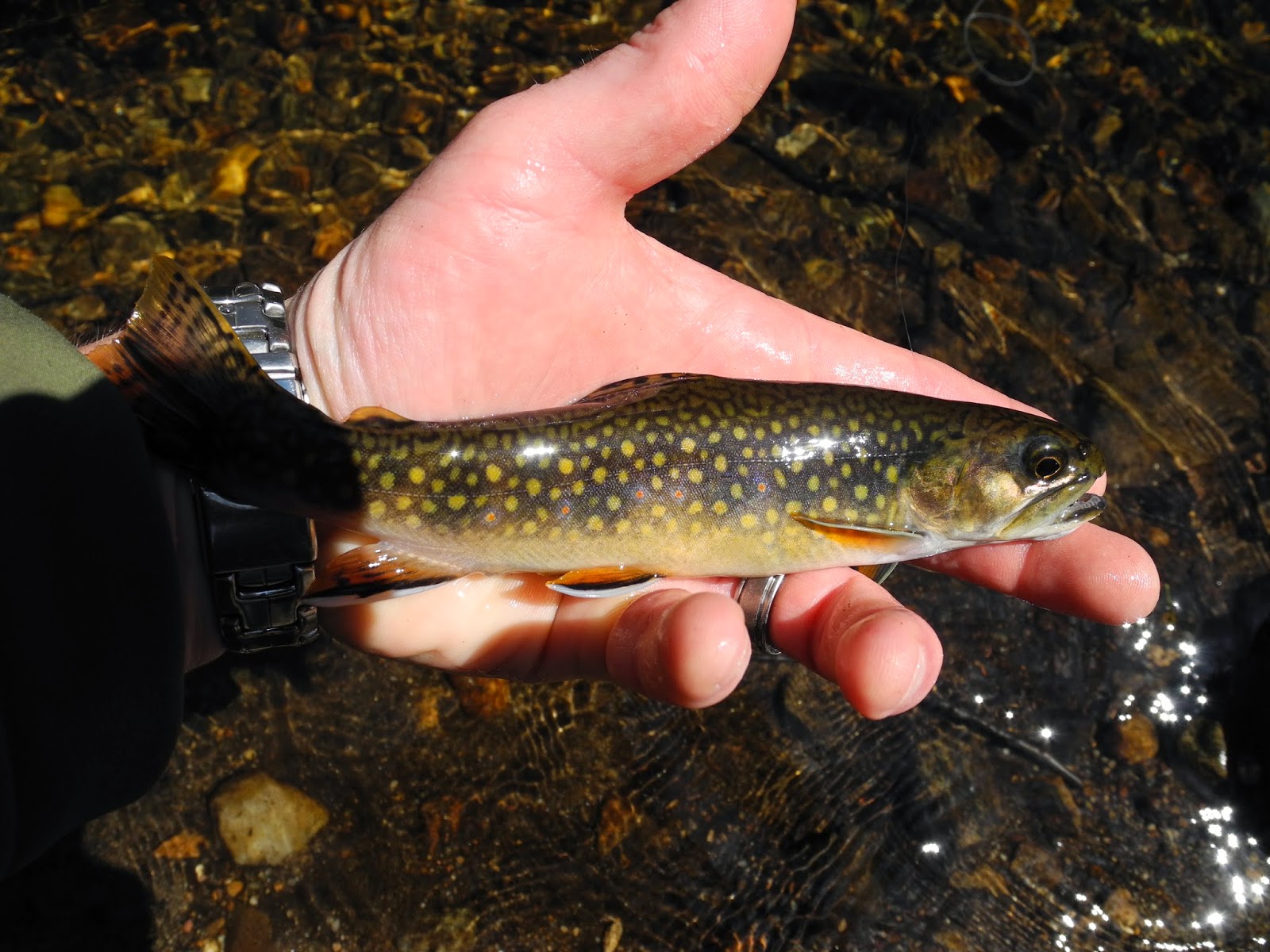 In one long deep pool, I managed a couple of smaller brook trout on the pheasant tail and then made the decision to fish the rest of the afternoon with a dry fly.  I chose one of my favorites, the Royal Wulff.  For the next couple hours, it was as if I was out on an early summer afternoon where the brook trout slash at dries with abandon.  Quite a few gorgeous little fish were brought to hand along with a few more sizeable ones as well.  It was a wonderful afternoon of fishing that went a long way toward putting the memory of a long winter to bed. 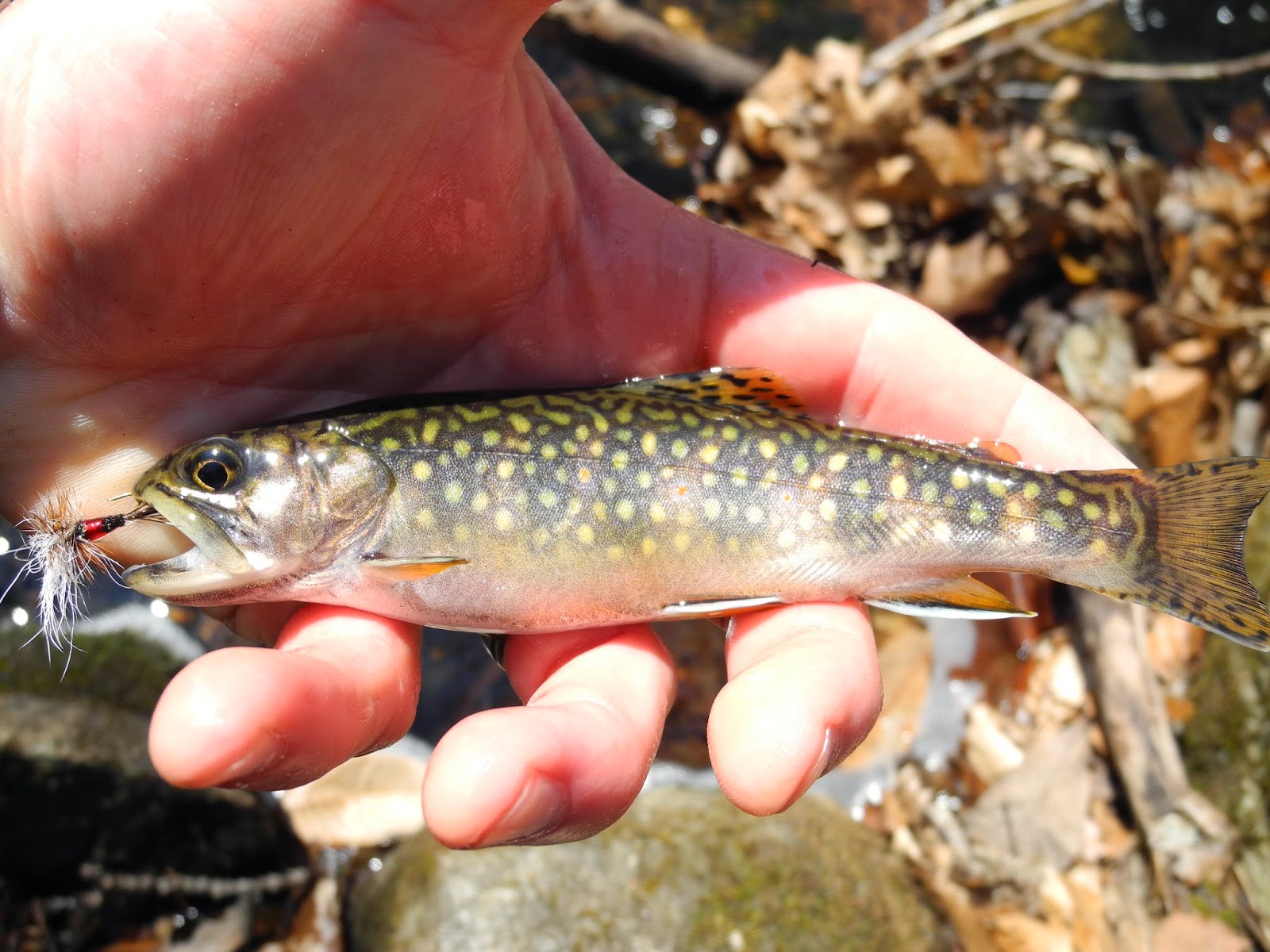 Wishing each of you and your families a wonderful Resurrection Sunday !

This morning it was up early to fish a local Trout Management Area.  The trout season will open next Saturday and the small streams I enjoy fishing will be open again but for now, options are limited.  This morning the woods were cool and damp from rain the night before but the stream was in good shape. 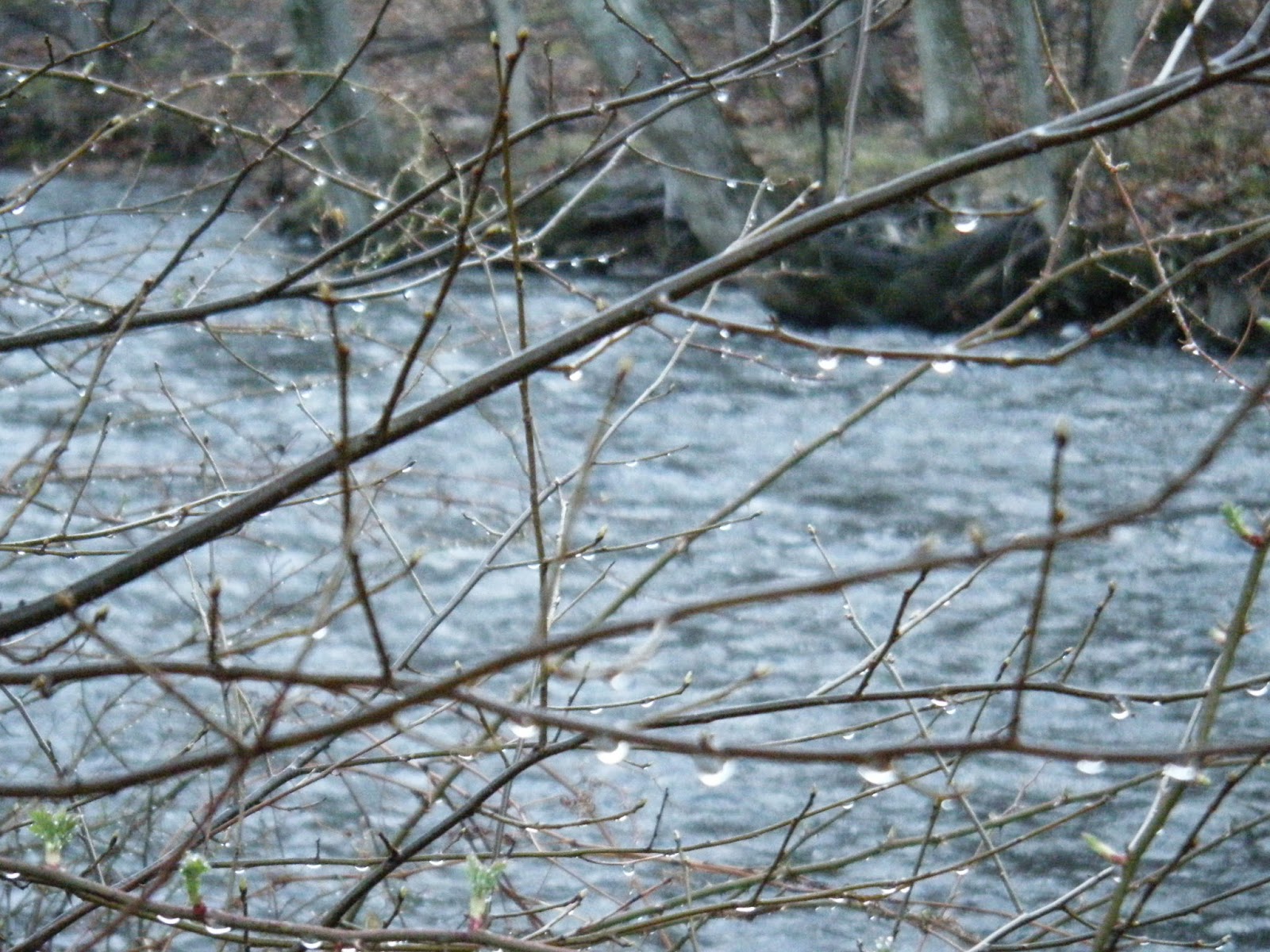 The trout lilies are starting to sprouting up through the damp, woody, debris.  It won't be long before we start to see their lovely yellow flowers. 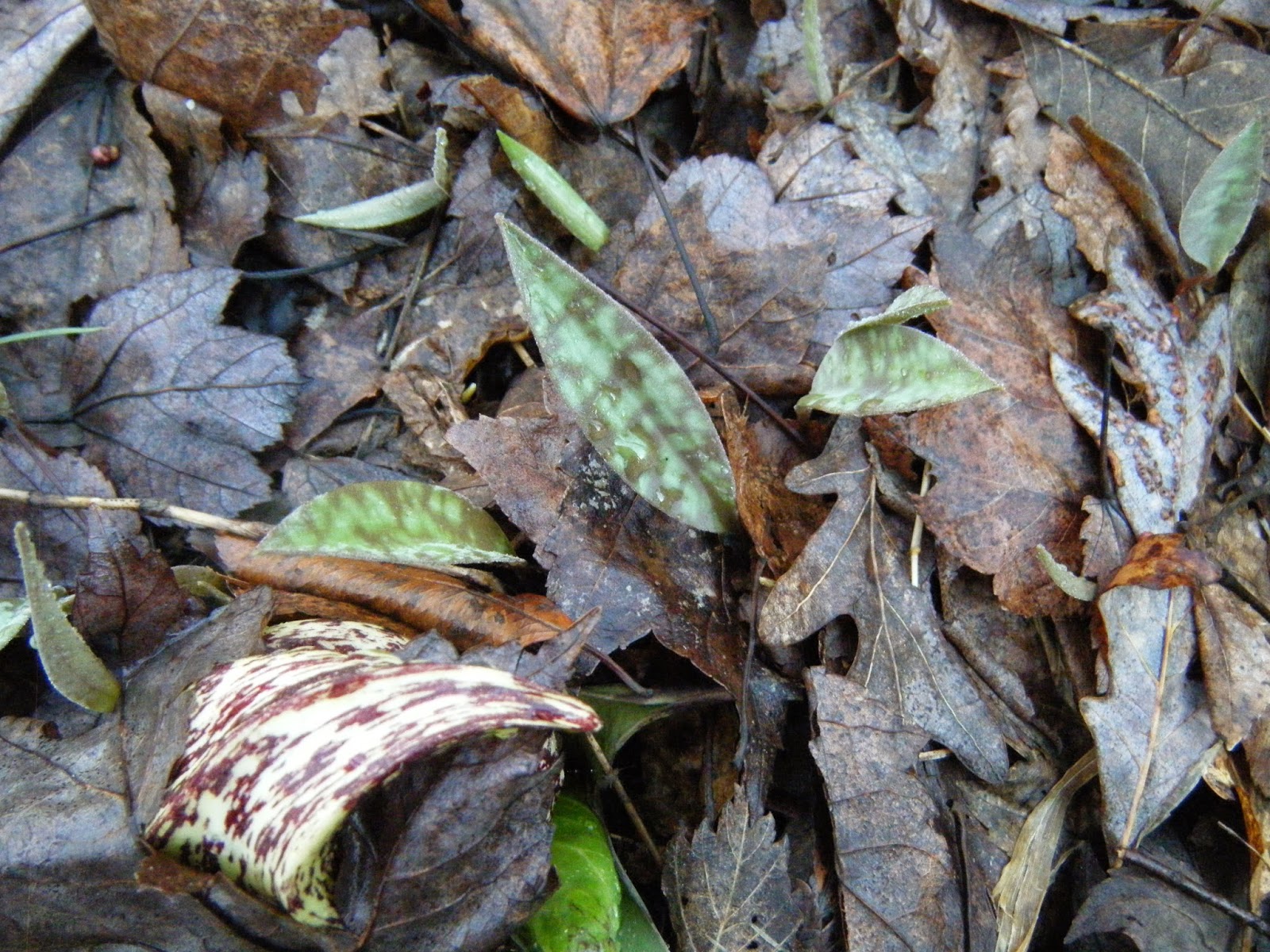 I was out for a little on Saturday and Sunday afternoon.  Saturday was cold, raw, and overcast. The stream I fished was up quite a bit from some rain the nice before.  The stream was clear but I wasn't surprised that fishing streamers and wet flies did not produce much.


After a good bit of walking, I managed one decent sized, feisty, chub for my efforts.  Despite the dour day, I did notice several sign posts indicating a transition in the seasons, and so I remain hopeful.


Sunday was a completely different day with a warm inviting sun.  Walking along a local stream, I noticed a decent stonefly hatch.  The first decent one of the season but the fish really didn't take any notice.  Maybe in the warmer days ahead.

Last Saturday and Sunday New England got the first heavy rain of this spring.  Rivers large and small were running a high and muddy.  Flows are settling but they still are high even for this time of year.  Yesterday I decided to make a quick trip to a local river after work.  The clarity was good but it was still quite high.  With some warmer afternoon temperatures I was wondering if I would see any stoneflies.  I saw the odd one here and there but they really haven't started to come out in any numbers yet.

Most of the softer seams, where I usually find fish, had a pretty stiff current in them and were generally unproductive.  It will probably take another day or two before flows return to more normal levels for this time of year.  I did manage a rainbow and a brown Euro nymphing in one of the deeper pools.  Both fish took a black bead head pheasant tail soft hackle dropper with a heavier fly on point to get the rig down and slow the drift. 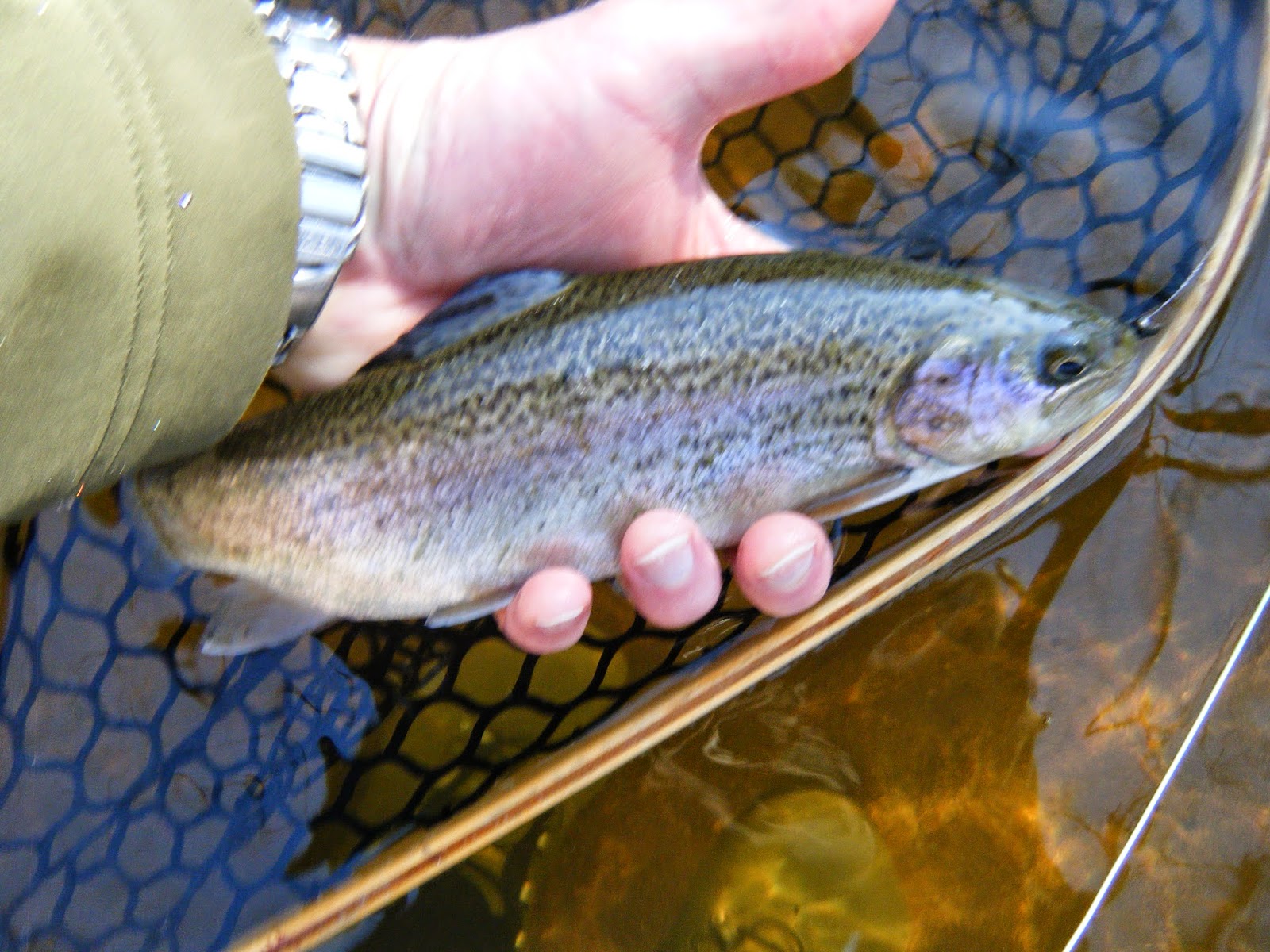 As I walked along, I noticed that the skunk cabbage  has not begun to open up let alone sprout. This is usually one of the first plants to sprout their large green leaves in the spring.  I went back to some pictures from past seasons and found the photo below.  In the year the photo was taken, spring came a couple weeks early.  My best guess is that we are 2-3 weeks away from seeing the usual sights of spring.