Lessons learned on a big river

So what place to big river lessons have on a blog about fishing small streams?  Well it’s all about observing and learning wherever you fish.  Here are some observations made over two visits to the Housatonic River in Northwestern CT over the last week.

The Housatonic River is a big, wide river and the largest one I've fished.  The river’s flow is no longer controlled and has reverted to “natural flow”.  In the spring, the water levels can be quite high diverting fishing pressure to it’s neighbor to east, the Farmington River.  As spring turns to summer, the river temps rise and the trout find sanctuary in thermal refuges around the smaller feeder streams that are off limits to fishing.  During the summer the Housatonic is known as an good smallmouth bass fishery.  But come fall when the water levels are down and the cool evening temperatures moderate the river temps, this river can often offer great dry fly fishing over fish that have been in the river for sometime. 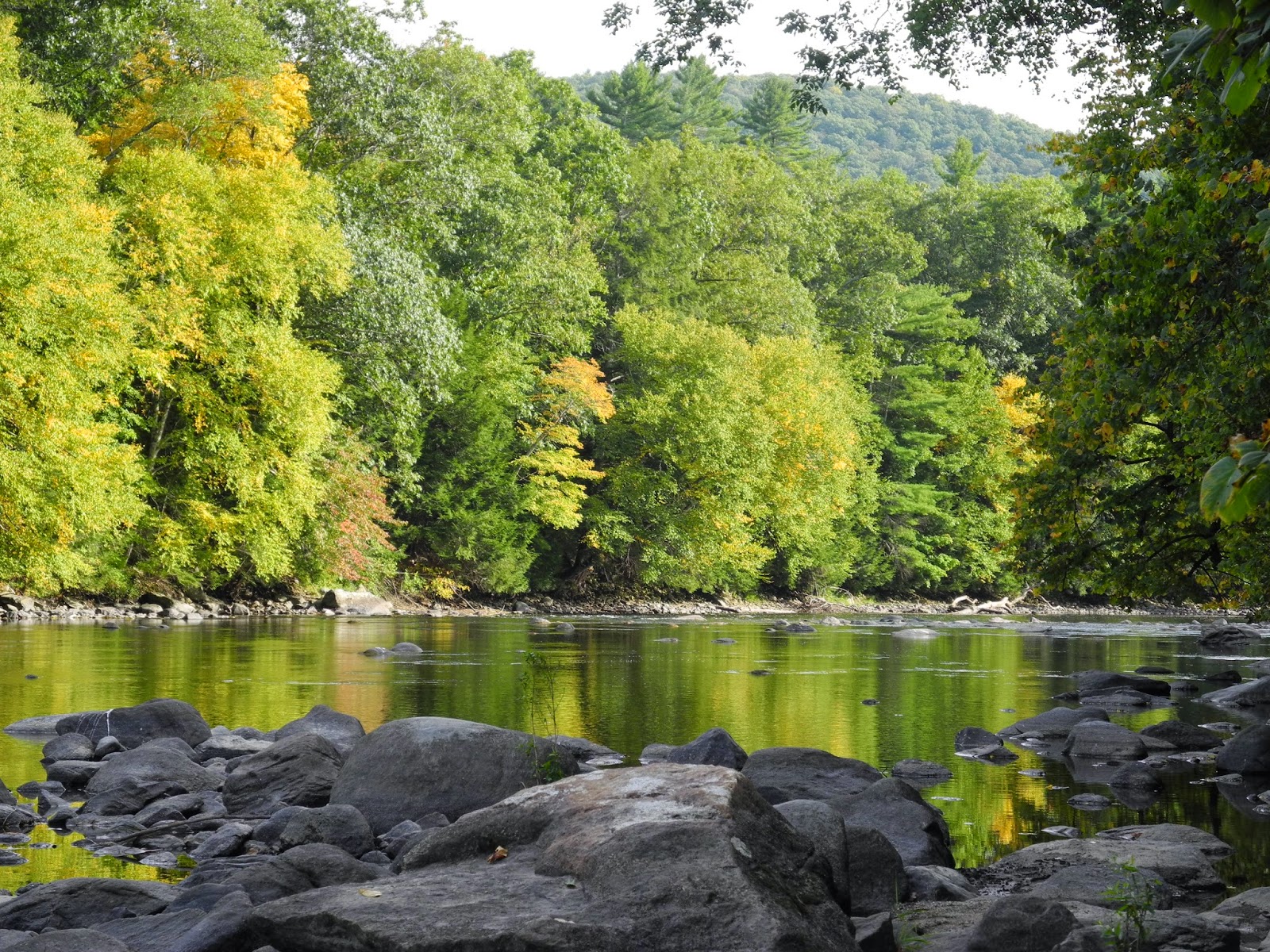 This past Sunday morning we had some much needed rain fall on our area. With the rain came warmer temperatures and much more humidity than we have been seeing in days prior.  With the overcast skies and the threat of more showers, I was hoping to see a lot of olive activity on the river.  When I arrived I saw lots of rising fish in a flat water section known to produce some nice olive hatches.  I fished small olives but only got a couple looks.  The fish were taking something small on the water so I took a closer look.  I should have been more observant. After all it was a hot humid fall day after rain, conditions known to produce flying ants!  Sure enough they were all over the water and me as well.  After switching to a #18 black flying ant, I broke one fish off, landed one, and missed another taker.  Lesson #1 – observe what’s on the water and yourself.  When it’s a humid fall day be ready with flying ants.   Lesson #2 – leave cruising fish alone.  I spent too much time trying to cast to rises only to see the fish move.  I would have much better off getting into a spot with a good flow of ants and consistently rising fish then chasing cruising fish.

As the day marched toward sunset the fish were ignoring the ants and were turning their attention to something else.   Light yellowish/brown spinners were in the air and on the water but my poly wing spinners and usuals were being ignored.  I did have one rise to a sulfur comparadun but that was it.  I left the river frustrated at having never figured out what was going on.  But the observations made that evening would become important a few days later.

With the return of the fall  weather pattern of cool evenings and moderate, dry afternoons, I was on the river again.  I Euro-nymphed a nice run early in the afternoon before any real hatch began.  I picked up two nice holdover rainbows on a super simple nymph, one with a very bright pink stripe and cheek that had obviously been in the river a while.  In addition to the rainbows, I also hooked a couple of smallmouth bass.  I’ve never fished for smallmouth before but these fish definitely impressed me with their strength and smarts.  One nice one managed to get himself wrapped around the only log in the area and I had to go and try to dig him out! 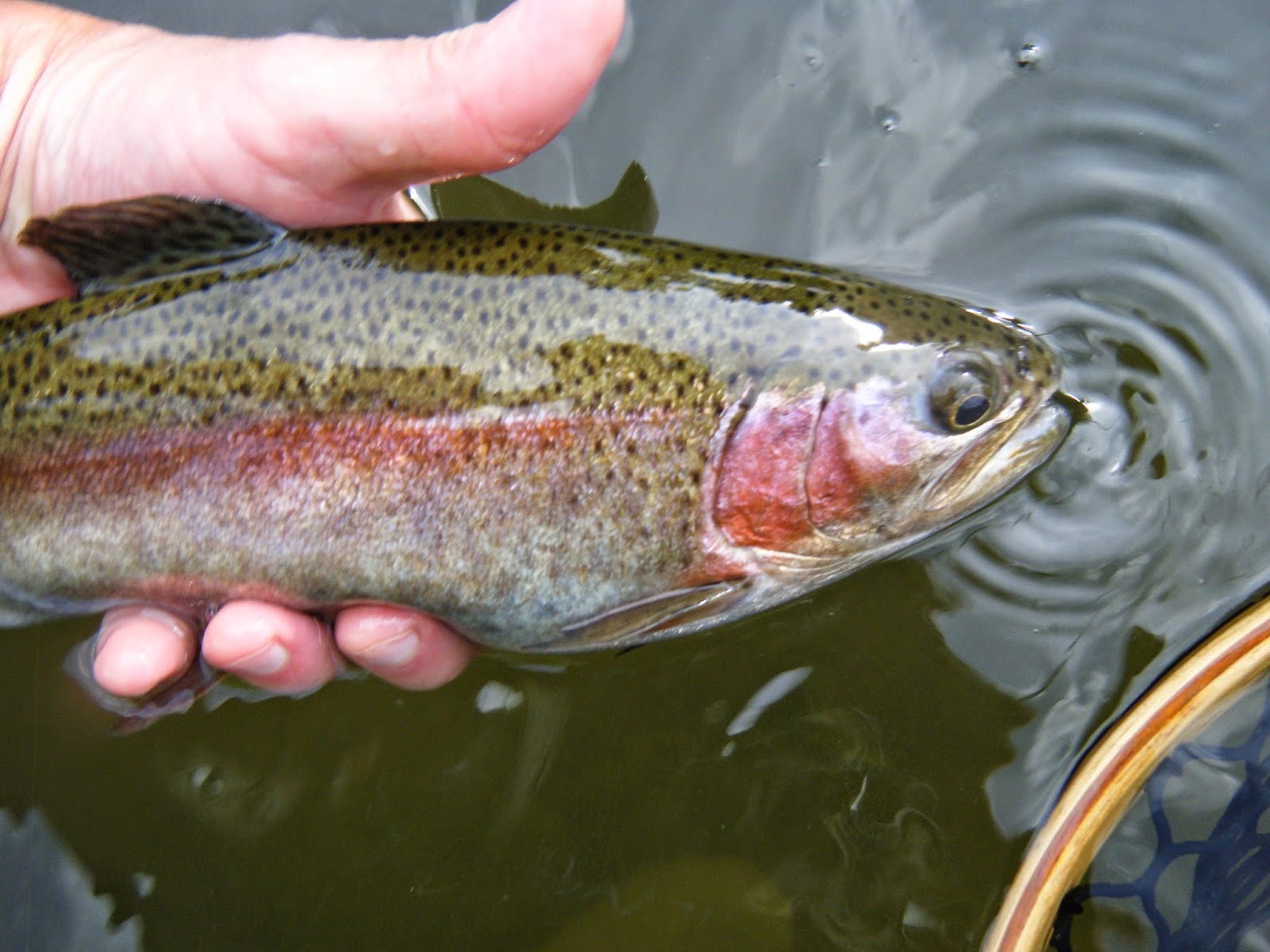 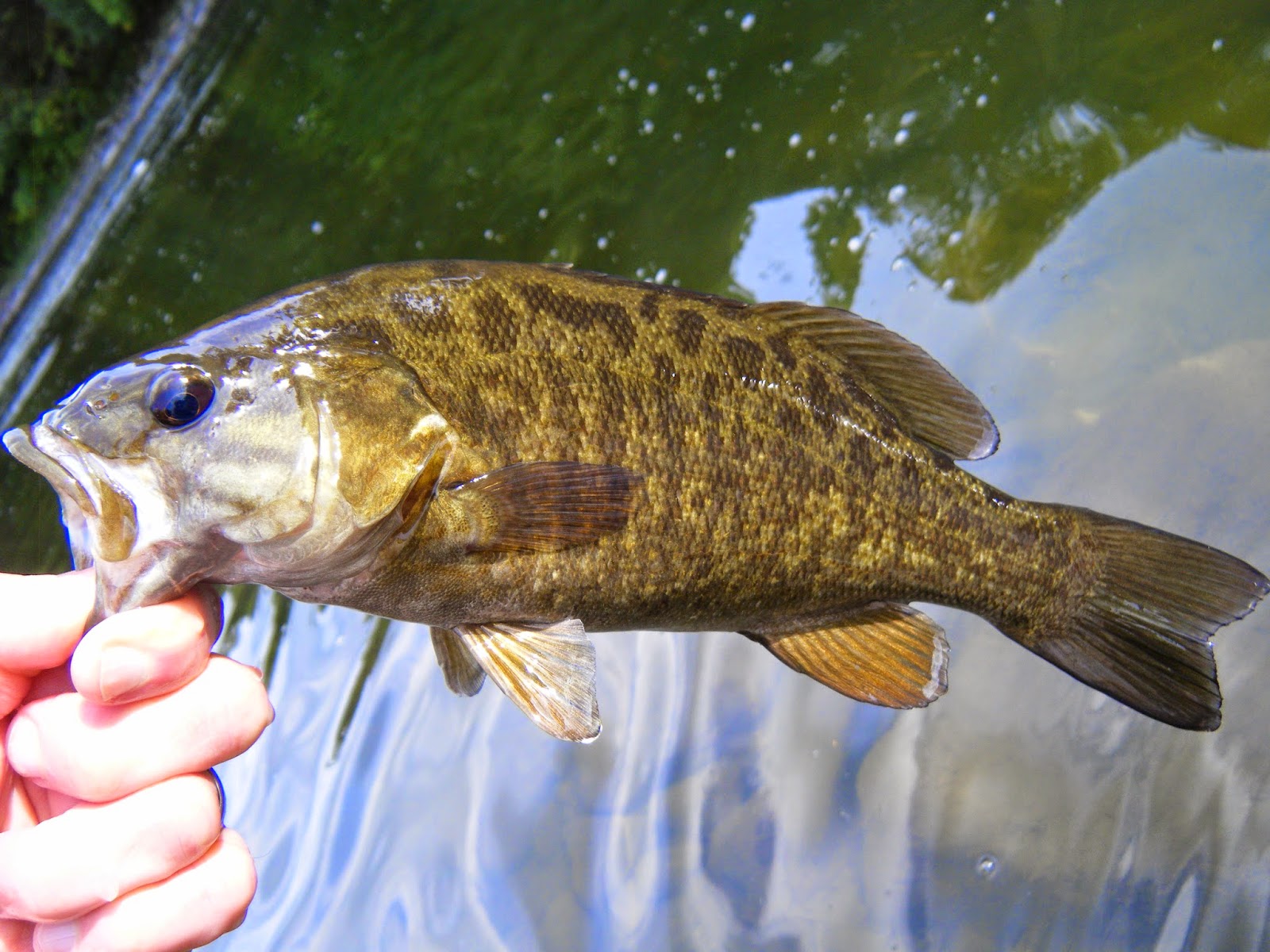 As the shadows lengthened, I headed to a more remote area of the river to see if I could find a decent hatch of isos.  When I arrived I had a vast expanse of the river all to myself without another soul in sight on a glorious early fall afternoon and the fish were starting to rise to the isos that were coming off.  It didn’t take long to hook a buttery holdover brown on an isonychia comparadun.  For the next couple hours I slowly worked my way up a long riffle casting the comparadun to rising fish.  I can’t honestly remember how many fish I caught but one in particular proved quite challenging.  From the rises, I could see this was a decent fish that was sitting between two currents in a calm pocket that was protected by some large rocks.  After repositioning myself several times to get a decent drift, I finally managed to have the distance and drift down.  As the comparadun drifted over its location, no time was wasted in taking the impostor with authority.  Once the brown felt the hook it headed downstream and across in a hurry.  By the time I could turn it, it was about 50 yds away and nearly on the other side of the river with lots of rocks between to use to its advantage.  Although it tried to bury itself in a couple of rock piles, I did manage to bring a nice hold over brown to the net.  While not a trophy by any stretch, I was very satisfied in knowing that I had landed a nice fish that was holding in a very challenging spot. As sunset approached the iso comparadun was getting less and less attention even though more fish were rising.  Now they were clearing the water chasing something that was perhaps rapidly rising through the water column.  The air was becoming heavy with the same yellowish/brown spinners I had seen a few days before.  I tried yellow poly winged spinners and usuals again and coming up empty again.  I did get one fish on a #16 white comparadun but that’s it.  After looking through my box, I decided to try a #16 sulfur parachute and picked up a couple fish before the activity slowed.  But the parachute was the key to what was going on.  This time of year yellow quills are around and their wings our mostly transparent.  The slender body of the parachute along with dun hackle was a good match for the transparent wings of the spinners and is probably why the white poly winged spinners were being ignored.   Yellow quill nymphs are also known to be active swimmers and if the trout were chasing the rapidly rising emergers that could explain why  I was seeing trout clear the water on both evenings.  So yet another lesson learned on the big river.  Next time I will be ready with some more parachutes and grey antron-winged spinners to see if that doesn’t solve the riddle!

Observing, learning and then applying that learning is one of the things I find so interesting about fly fishing.  But I have to say that the pure simply joy of being outside in God’s wonderfully beautiful and intriguing creation on clear, cool, fall day is hard to beat.

The last friday afternoon/evening venture of the summer.  Things were slow in the afternoon but as the day cooled the fish started getting active.  At first they were taking small emergers and I fooled a couple on a #22 CDC emerger.  Then the fish started clearing the water chasing something.  There were small spinners hovering over the water and I think the fish were leaping for them.  I've seen this before but I could not tell exactly what they were after.

As darkness fell there were swarms of spinners and I was hopeful there would be a spinner fall but it didn't material.  I did manage to fool one brown on a #20 rusty spinner but that was it. 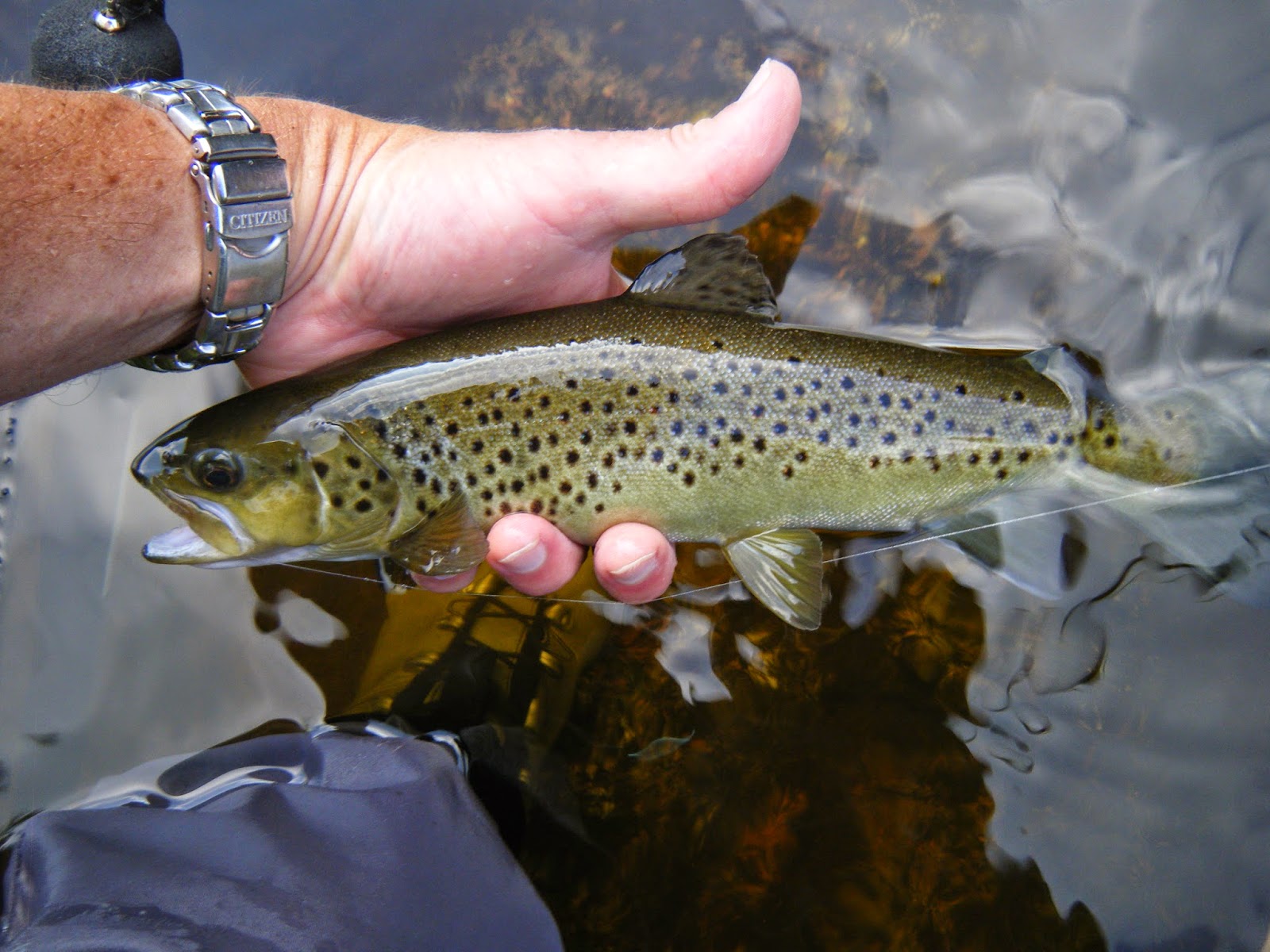 A late summer Adirondack brook in the rain 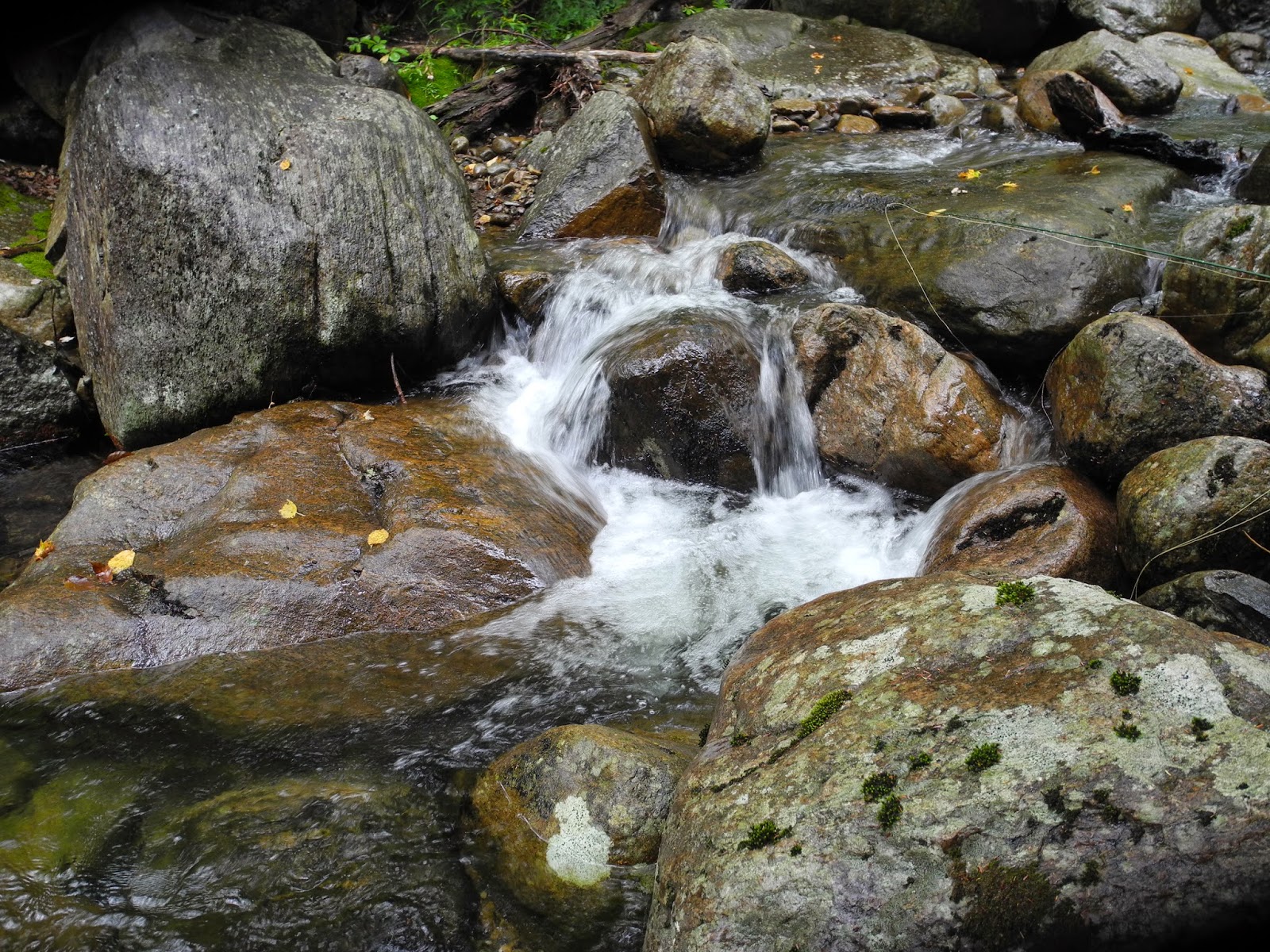 Sunday morning I woke up to a gentle late summer rain.  The day was a soft mix of grays and greens and the sky was content to live among the valleys and the towering white pine.  These are the days I love to fish small mountain brooks becuase the rain has a way of bringing new life to dry late summer brooks and the dense air seems to make everything seem more quite.

The brook trout were eager to pounce on the Royal Wulff in the heads of almost every riffle.  Some quite dark in color, others light taking on the hue of the orange tinged rock bed, and some starting show hints the color they will wear in the fall.  It was wonderful afternoon to be outside getting wet but drinking in all of God's amazing creation. 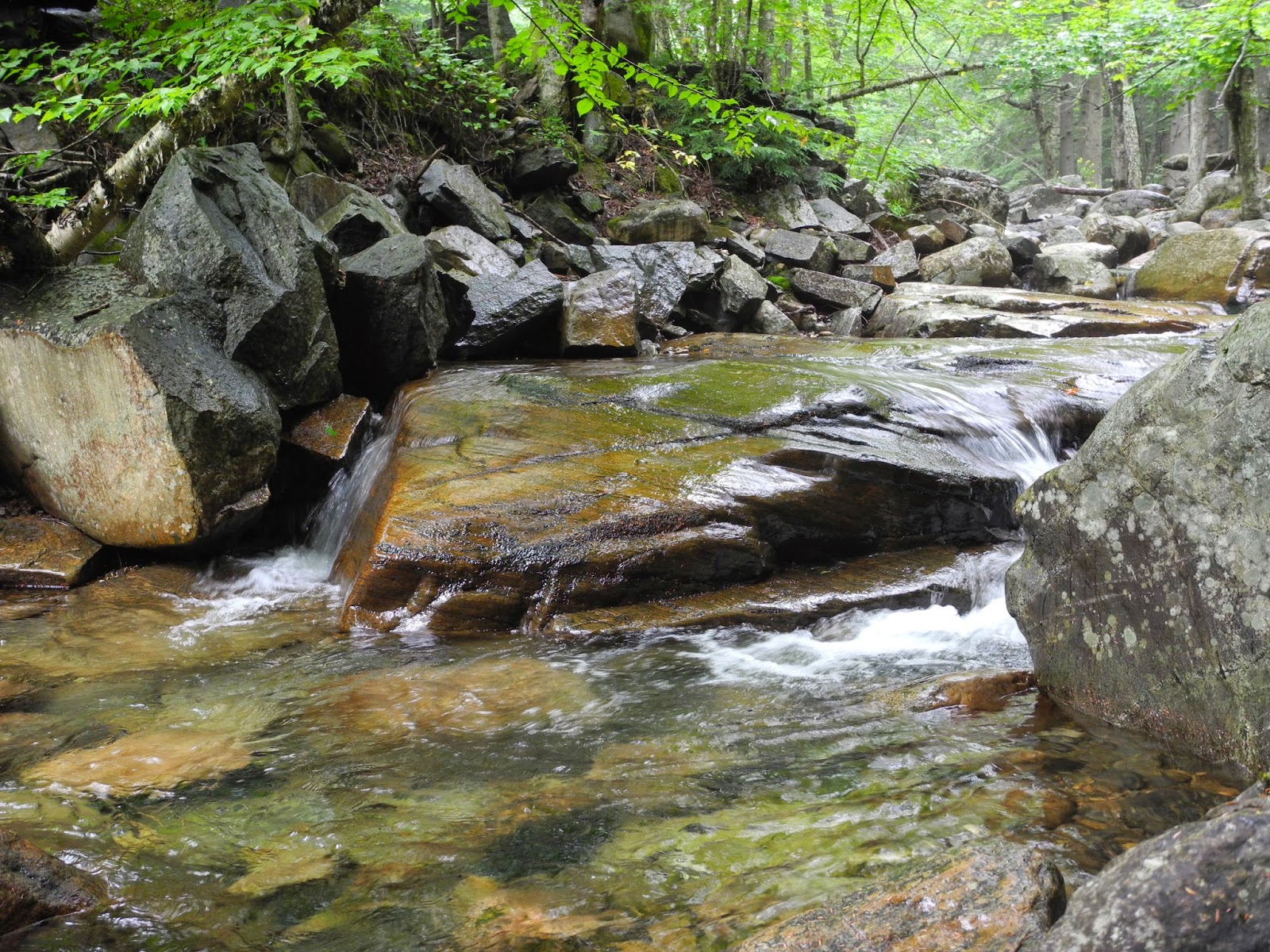 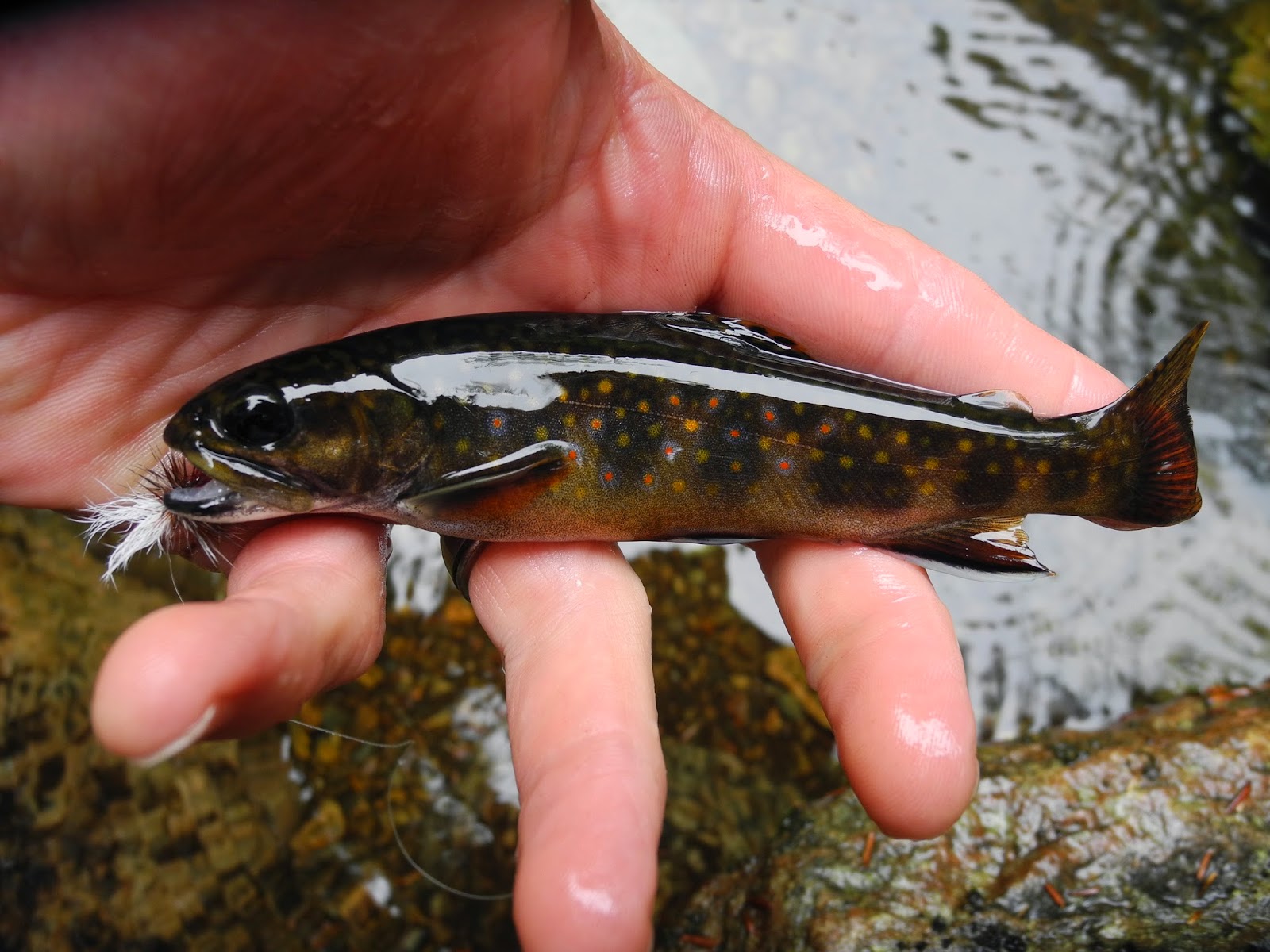 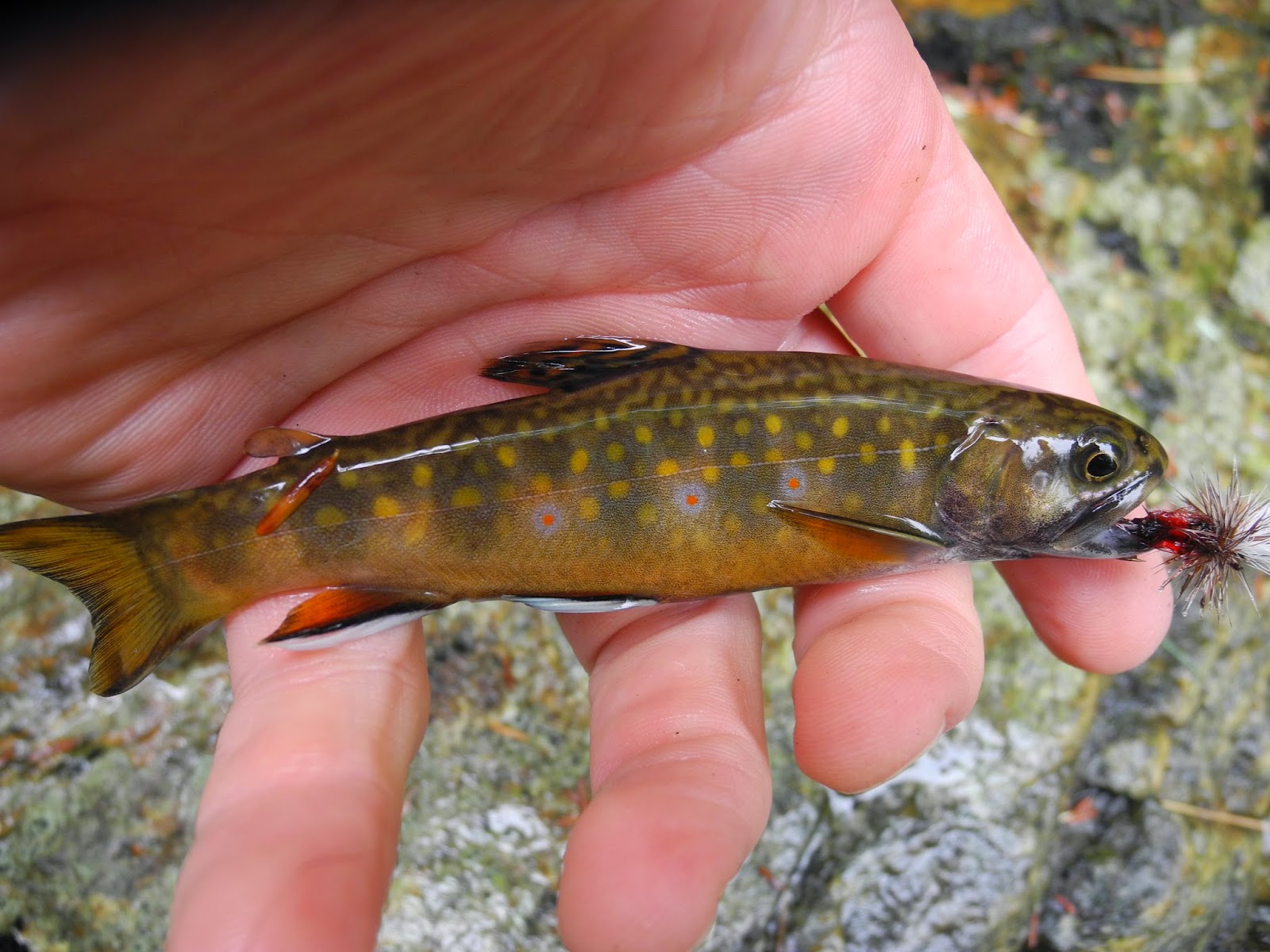 The rest can best be said in pictures! 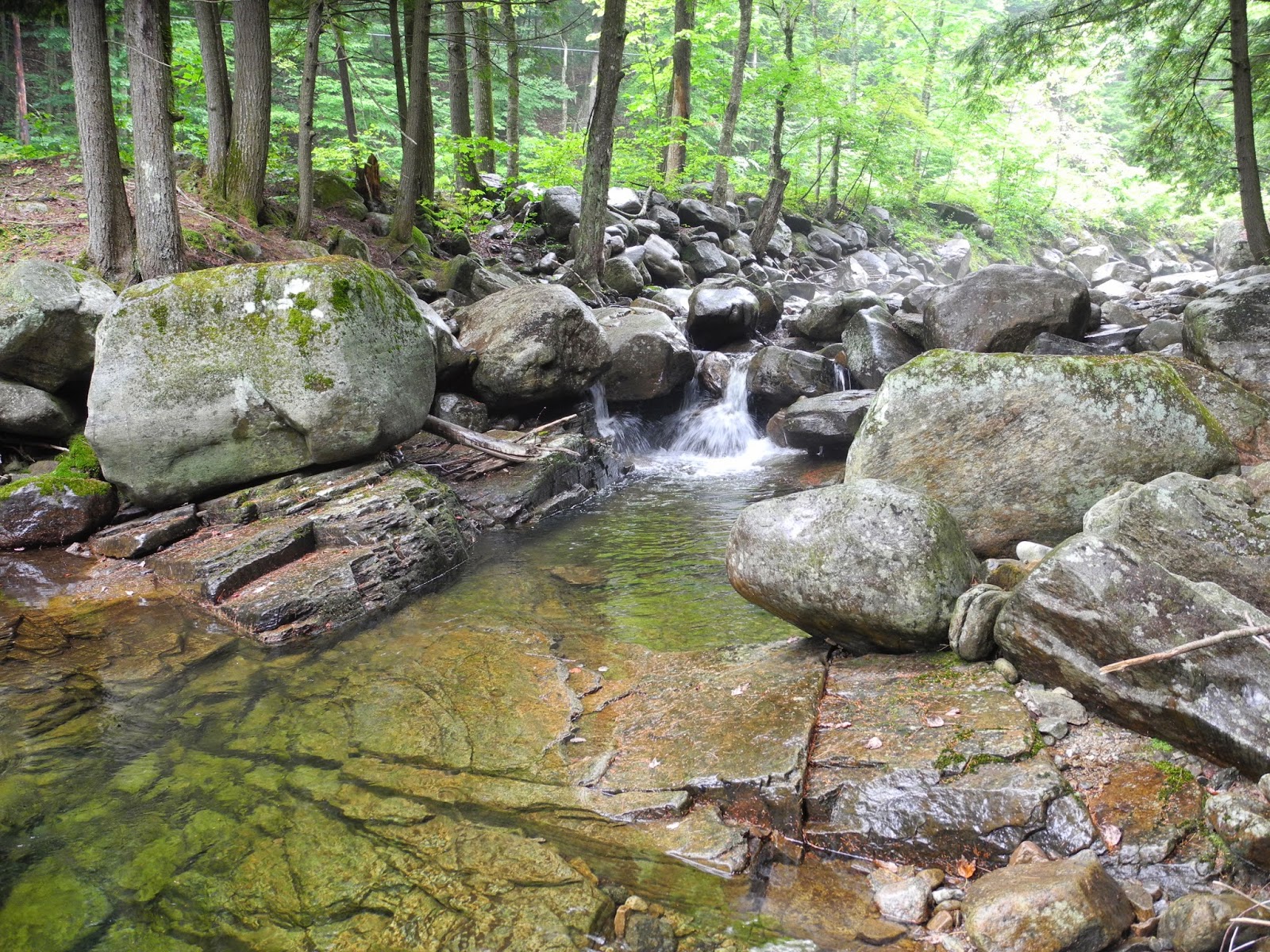 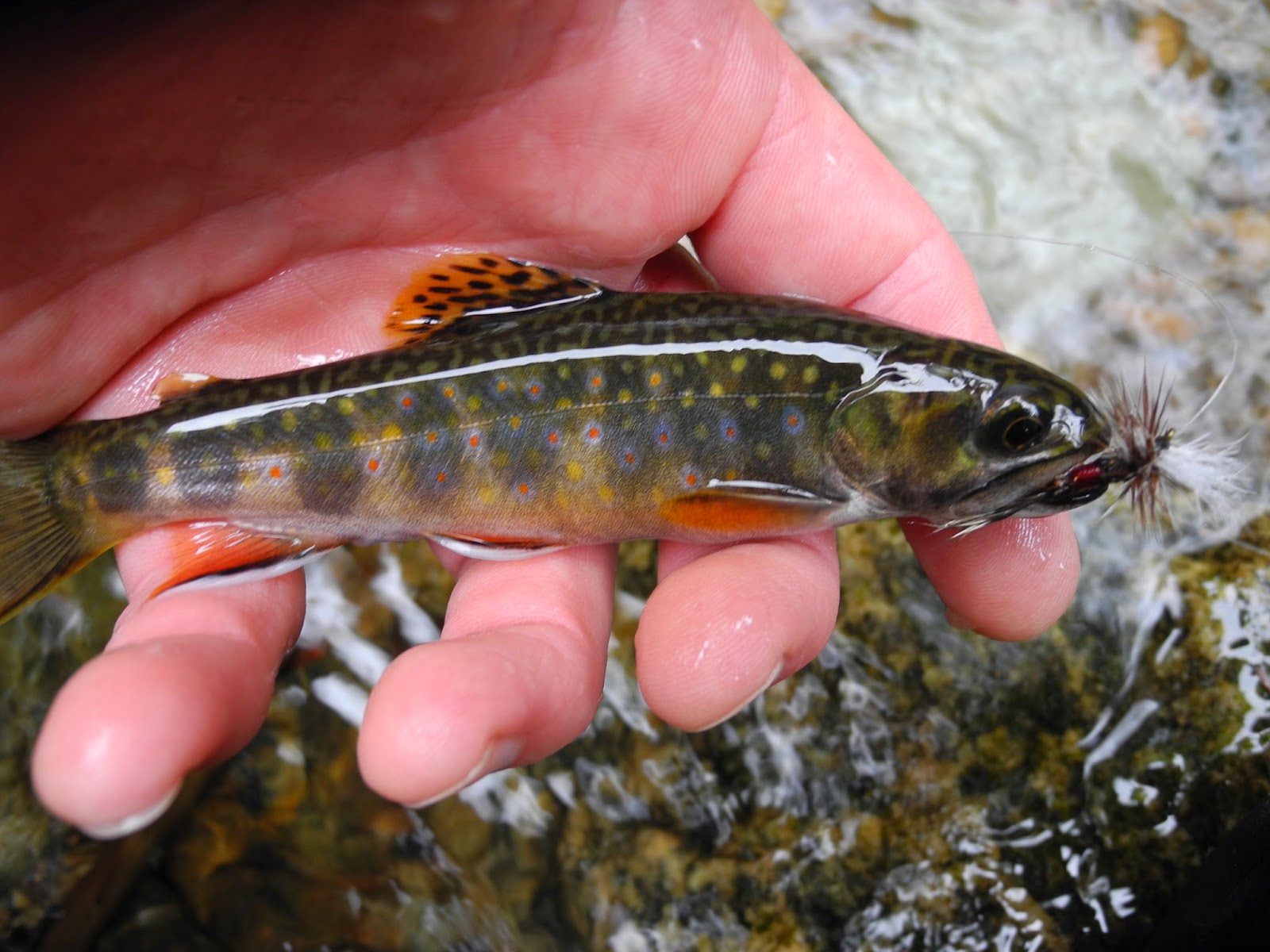 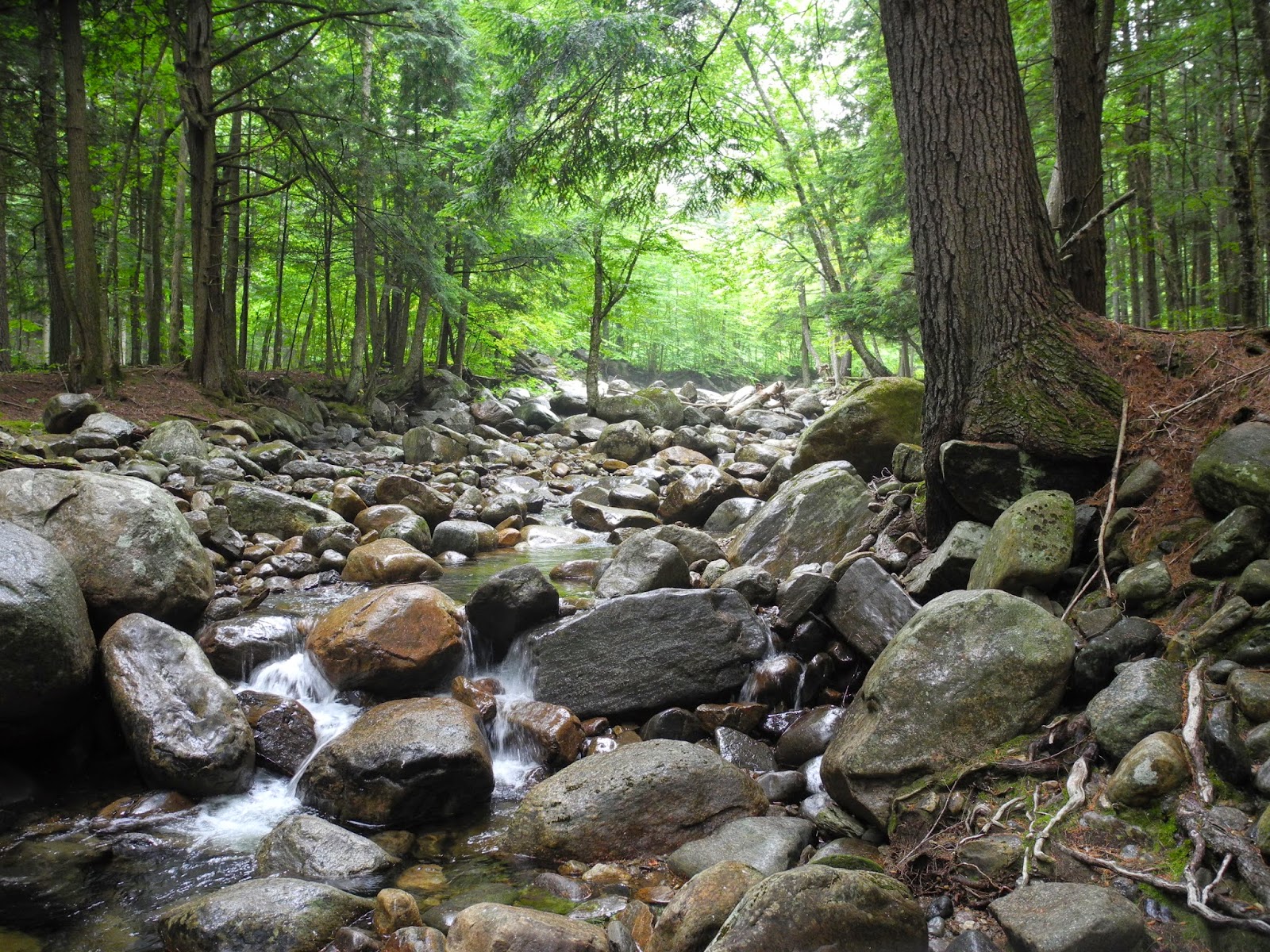 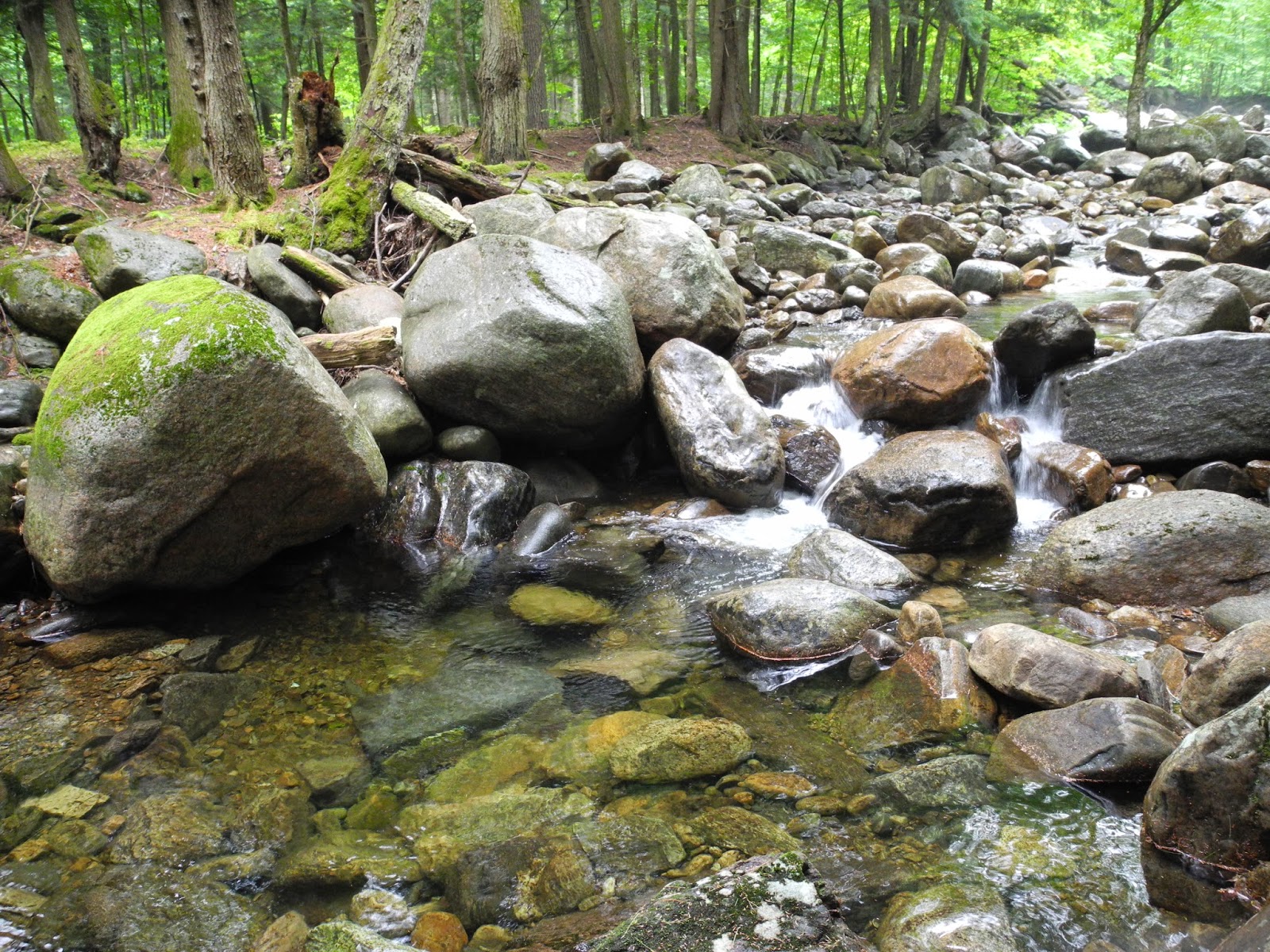 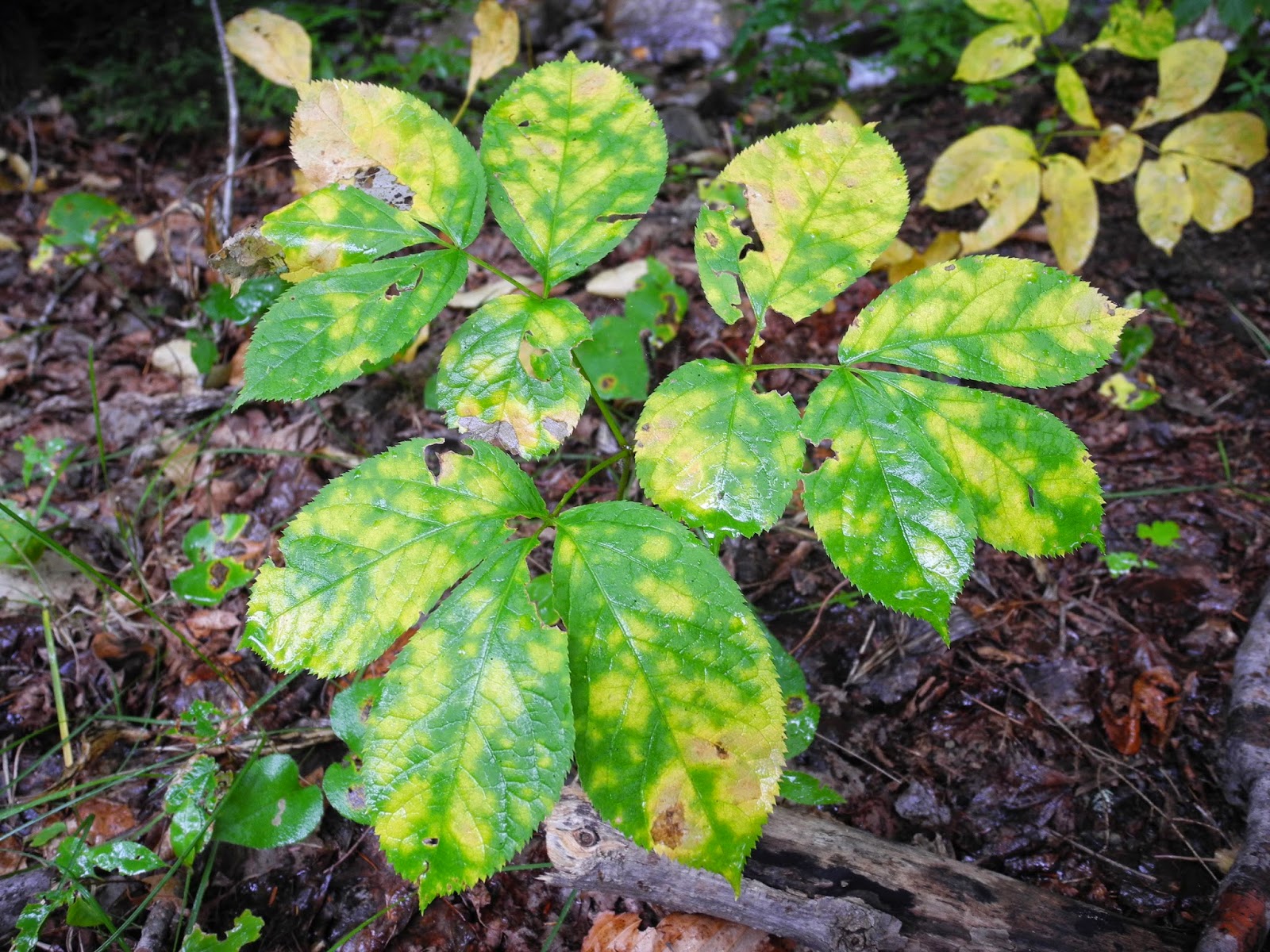 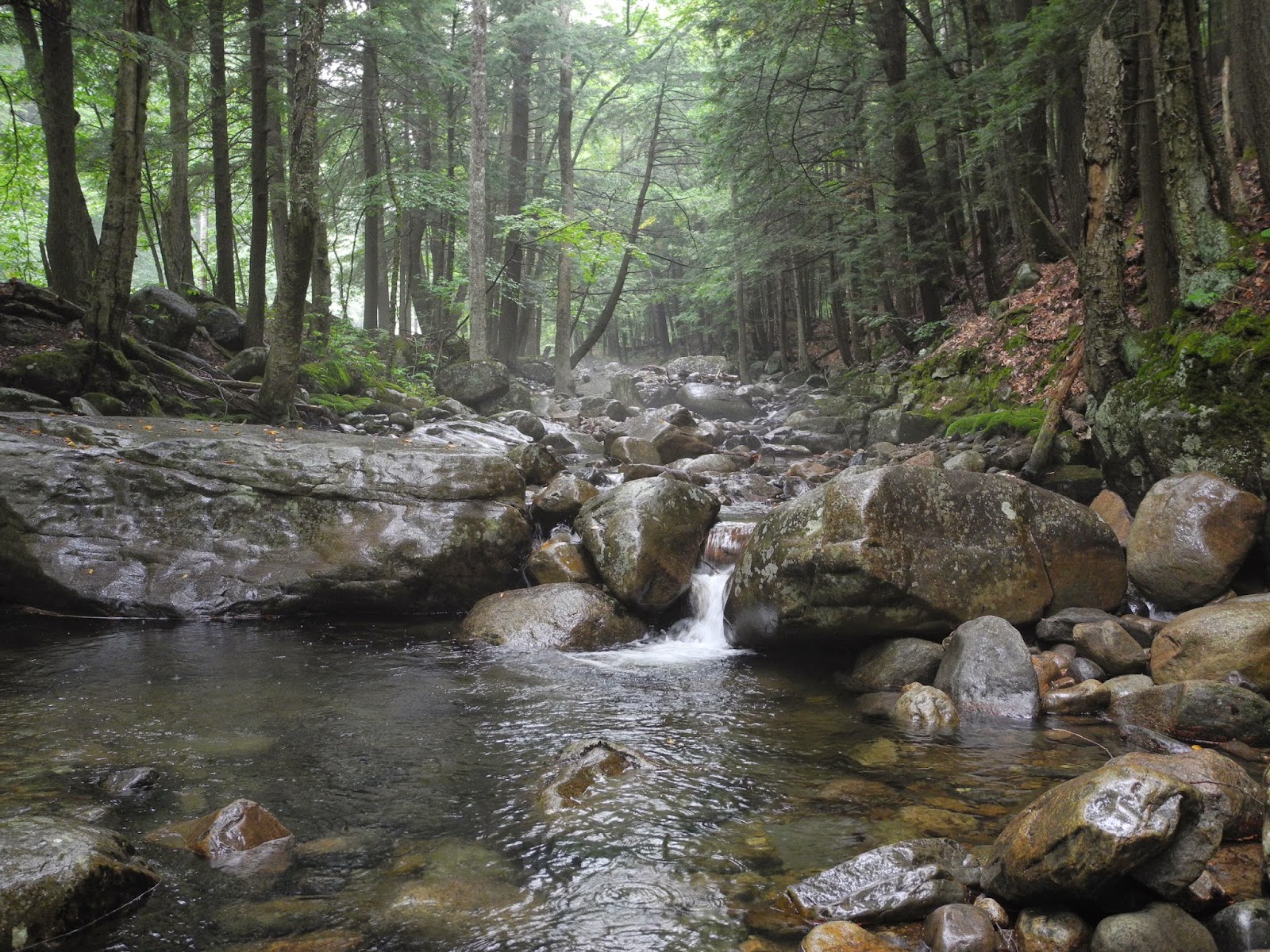 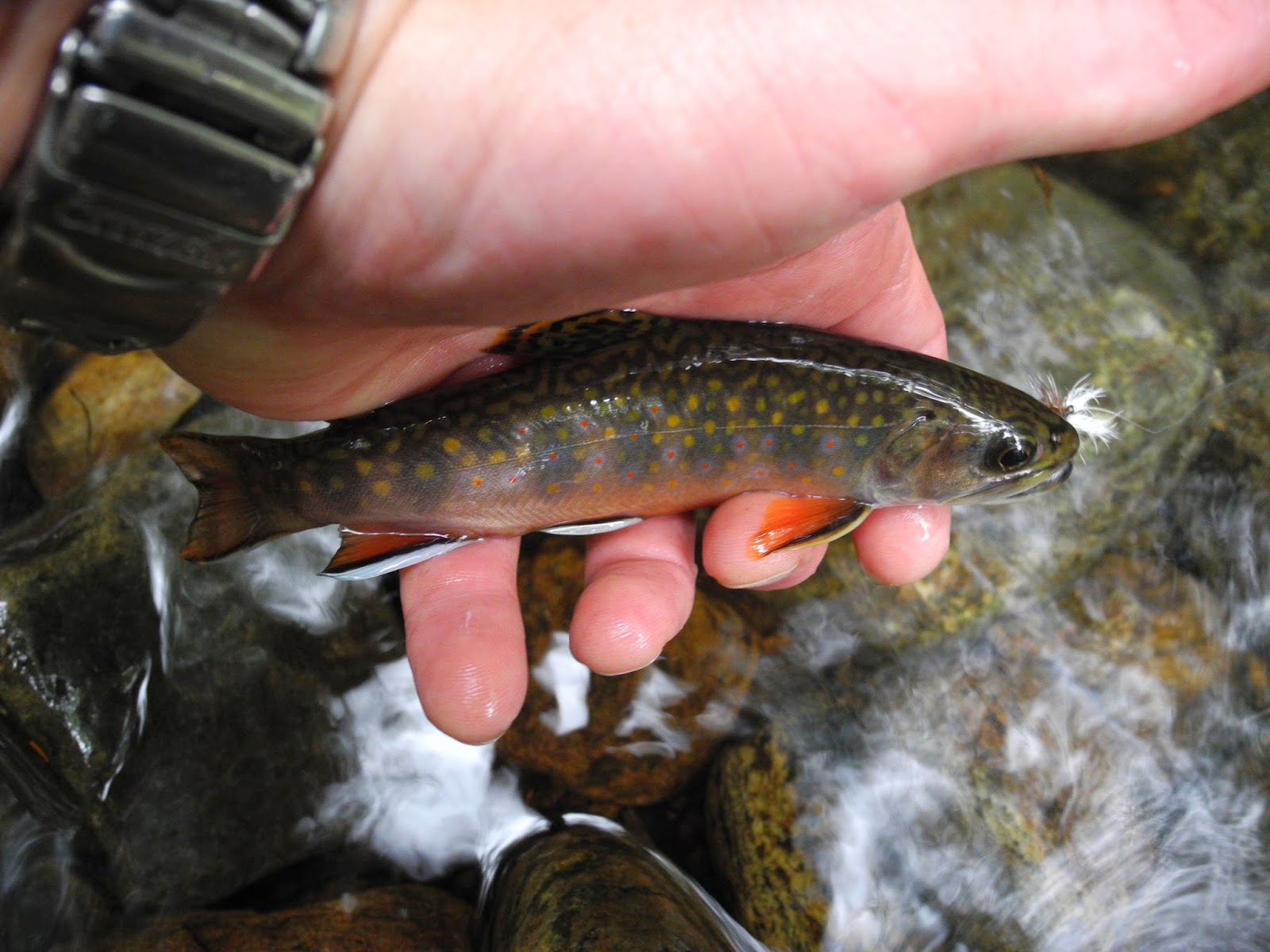