Merry Christmas to all of you 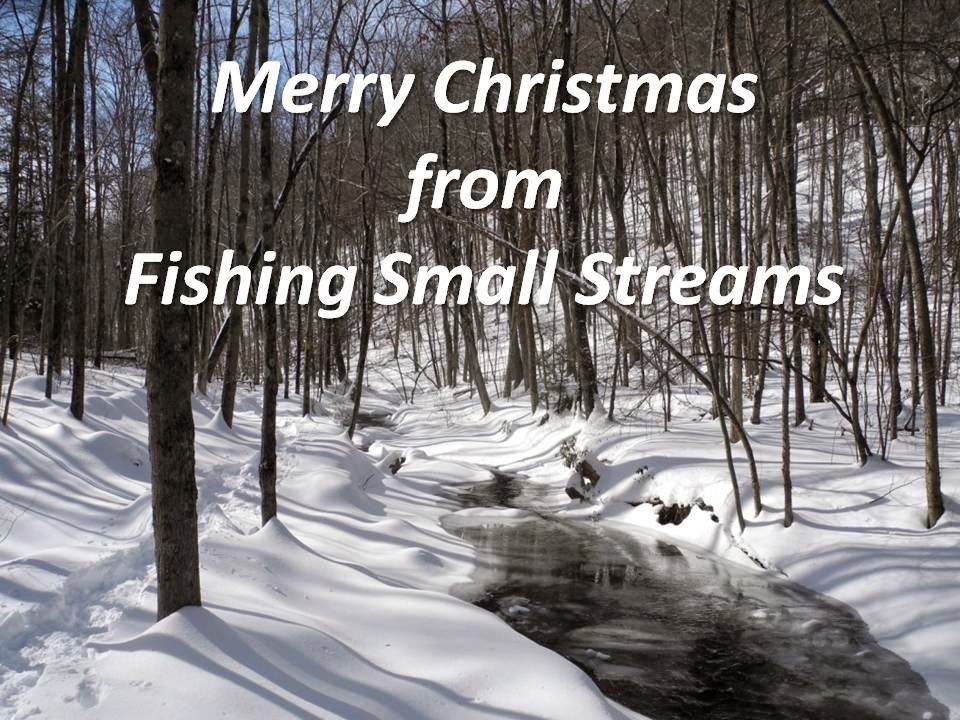 Wishing all of you a Merry Christmas and best wishes to all in 2015.  Thanks for following along for another year!

And in the same region there were shepherds out in the field, keeping watch over their flock by night. And an angel of the Lord appeared to them, and the glory of the Lord shone around them, and they were filled with great fear.  And the angel said to them, "Fear not, for behold, I bring you good news of great joy that will be for all the people.  For unto you is born this day in the city of David a Savior, who is Christ the Lord.  And this will be a sign for you: you will find the baby wrapped in swaddling cloths and lying in a manger."  And suddenly there was with the angel a multitude of the heavenly host praising God and saying,

"Glory to God in the highest and on earth Peace among those with whom He is pleased!"

Every now and then I remember the old Carpenter's song "rainy days and Mondays always get me down" but I guess they didn't know the simple solution to the Monday blues:  go fishing!  The last two Mondays I've been able to use up some vacation time and fish.  It really does help get the week off to a good relaxing start.  For me it provides an added day of rest to consider things that were discussed in Sunday's sermon or Bible study.

Yesterday, a friend from work and I made plans to fish the Farmington River together.  He is an experienced smallmouth bass, walleye, pike, and muskie fisherman from the Midwest with some experience with the fly rod but he had never fished for trout.  I rigged the euro nymphing rod for him and he had getting a good drift down by the time we left the first spot we fished.  This is my usual "get on the board" spot and we blanked so I was wondering if I was going to be able to get him into some interested fish.   After not finding fish in the usual spots, I decided we should move on, a decision that proved to be a good one.


The river was up higher than I usually like to fish and at the next stop the river had an angry look to it.  I had my wading staff so, I eased him out into the strong current and got his feet planted with the staff anchored between us just in case.  As I was showing him where to drift the flies, the first brown took the frenchie and took off downstream.  After a couple of strong runs, the hook popped out but no worries, we had found fish.  I ended up putting my heaviest stonefly nymph on point and the #10 frenchie as the dropper just to make sure the rig got down as quickly as it could.  It wasn't long before he got his first lesson on fighting a Farmington brown.  The brown won that battle but experience was gained.  In the end he was able to land a couple and I was as well.  All the fish took the frenchie, which is proving to be a fine fly for winter nymphing.  We fished a third location without any interest and a few more lost flies but the wading staff I dredged up nymphing this spot a month ago was still sitting on the bank where I left it, so John had a recycled wading staff for the next trip!  You can't beat fishing on a December Monday and catching a few! Who says Monday's have to get you down. 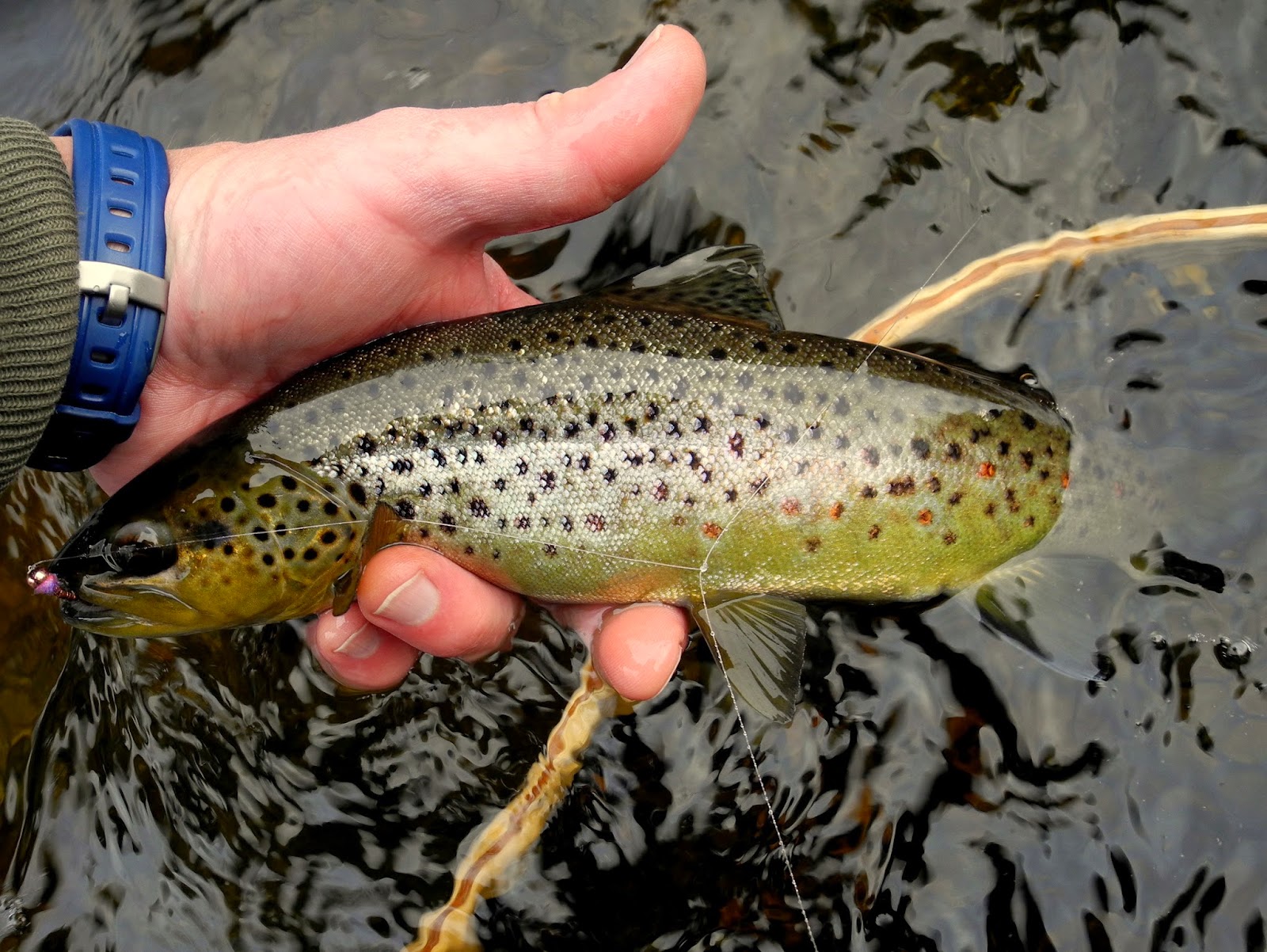 A December morning on the Farmington It was a cool morning on the Farmington River this morning but as soon as the sun came out the mercury started to climb to the 40 degree mark. Around noon there were a good number of olives about but they were largely ignored.  I did manage to coax one snout to the surface but I missed it.


I started off the morning Euro nymphing with a frenchie anchor and a small foam egg trailing behind.  At the first location I dropped a decent brown but  connected with and landed a nice rainbow and brown on the foam egg 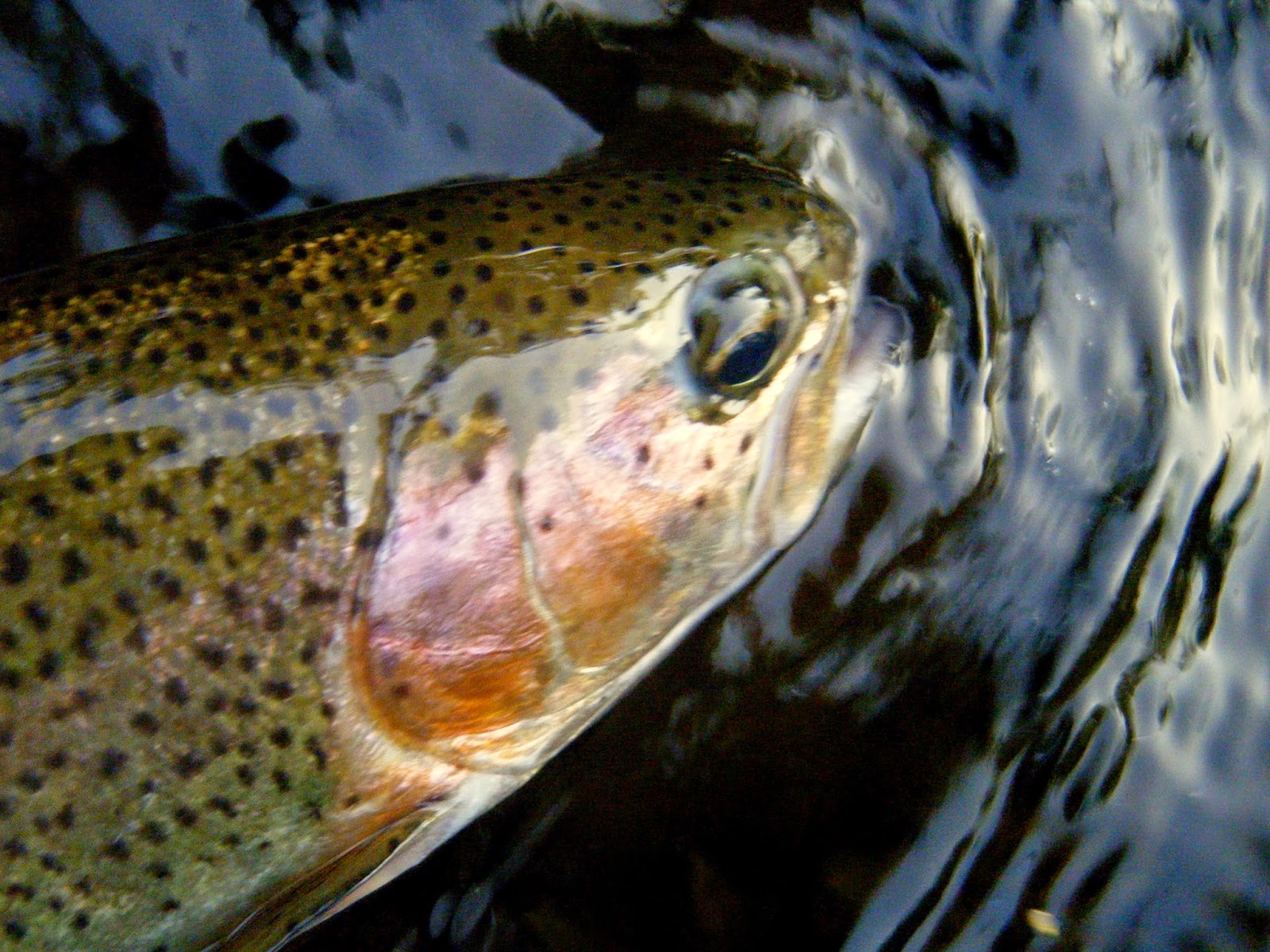 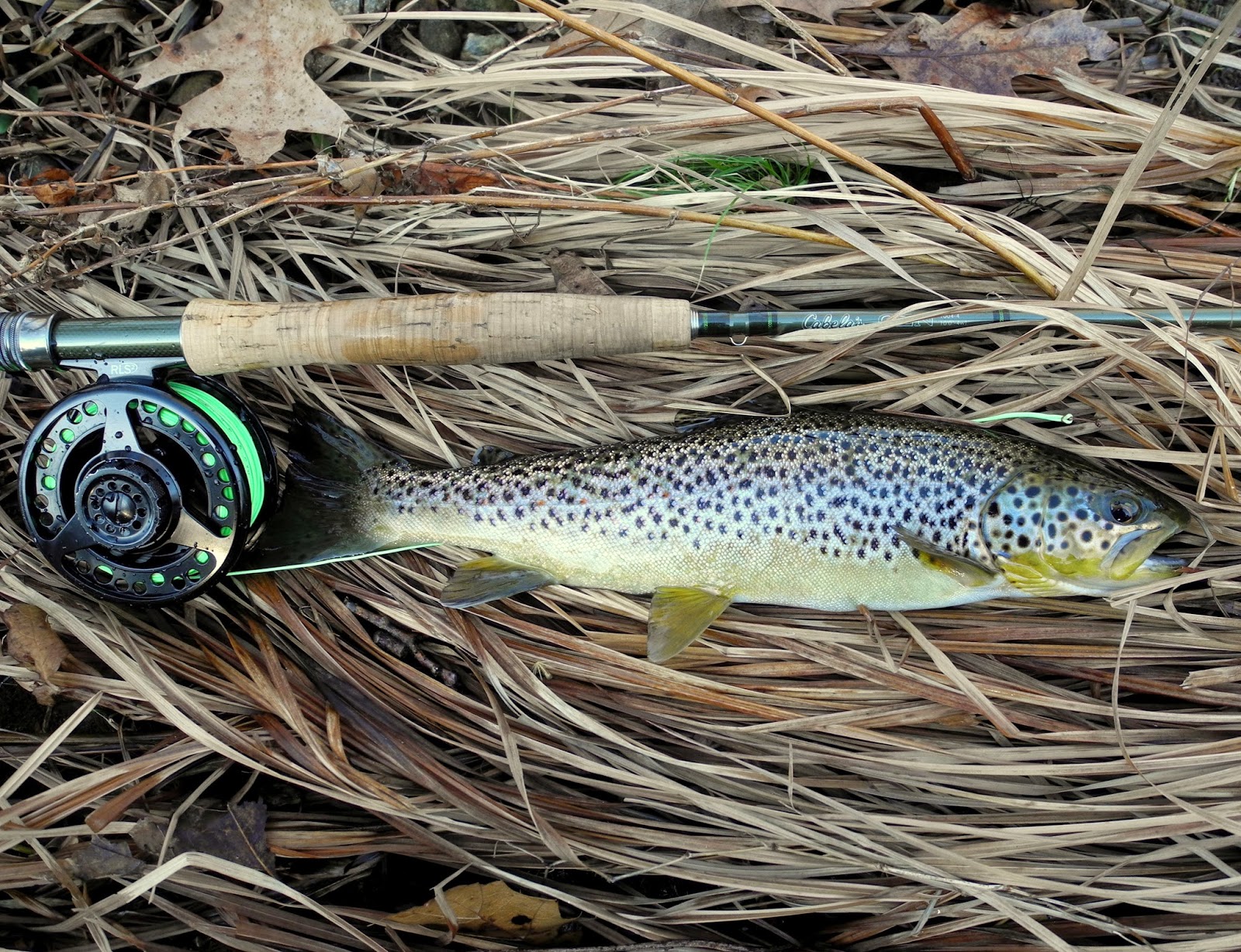 At a second location, the nymphing continued to produce taking two browns, this time both browns took the frenchie anchor.  As the sun began to warm things up the olives started coming off. I was thinking of packing it in and heading to a spot that might have some dry fly action.  Before I did and let the rig drift through a deep slow channel between two strong currents and hooked a decent fish. From the head shaking and deep dives, I was pretty certain it was a big brown.  When I finally got a glimpse of the fish, I could see it was big brown.  Even though I didn't accurately measure it, it was easily the biggest I've landed to date. 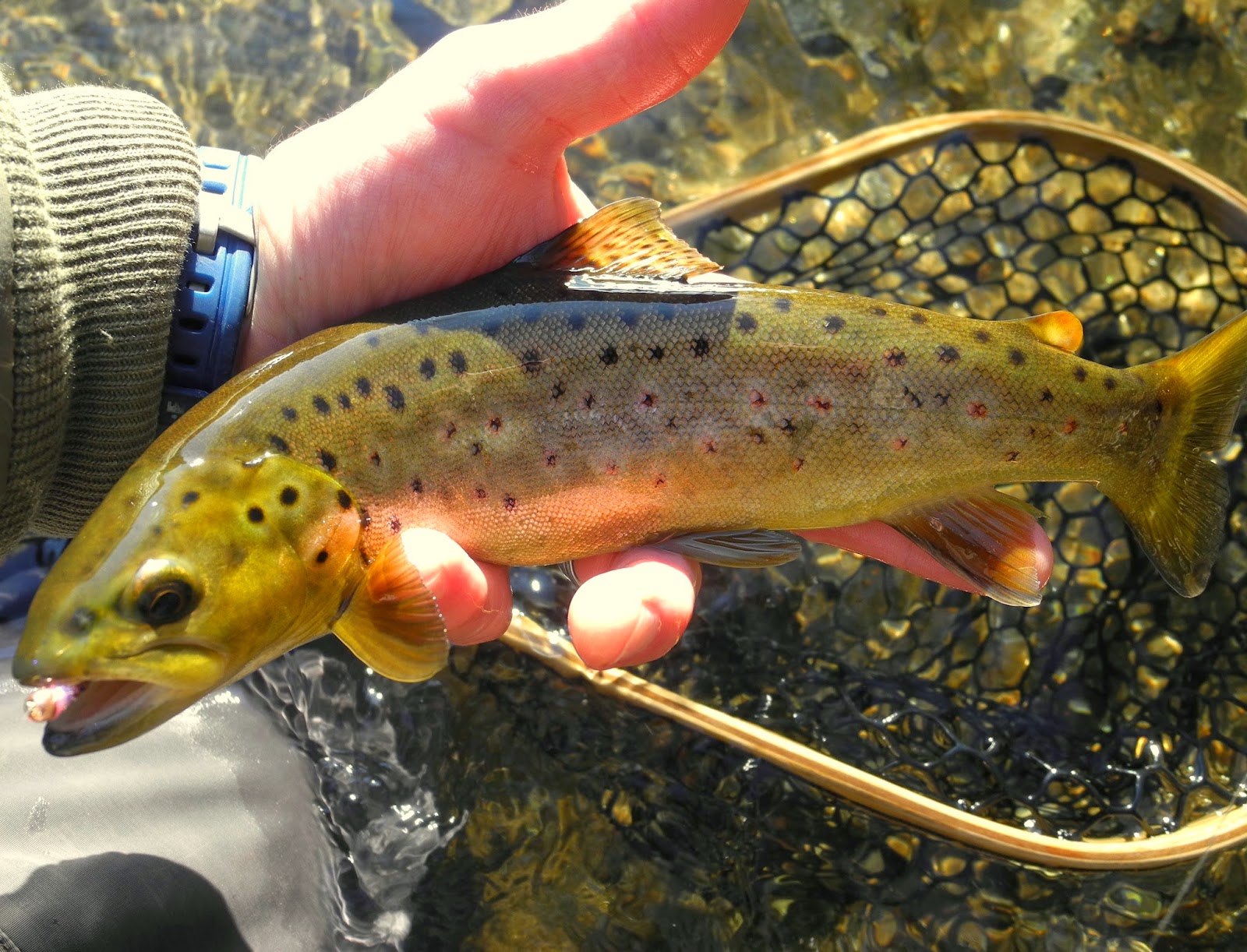 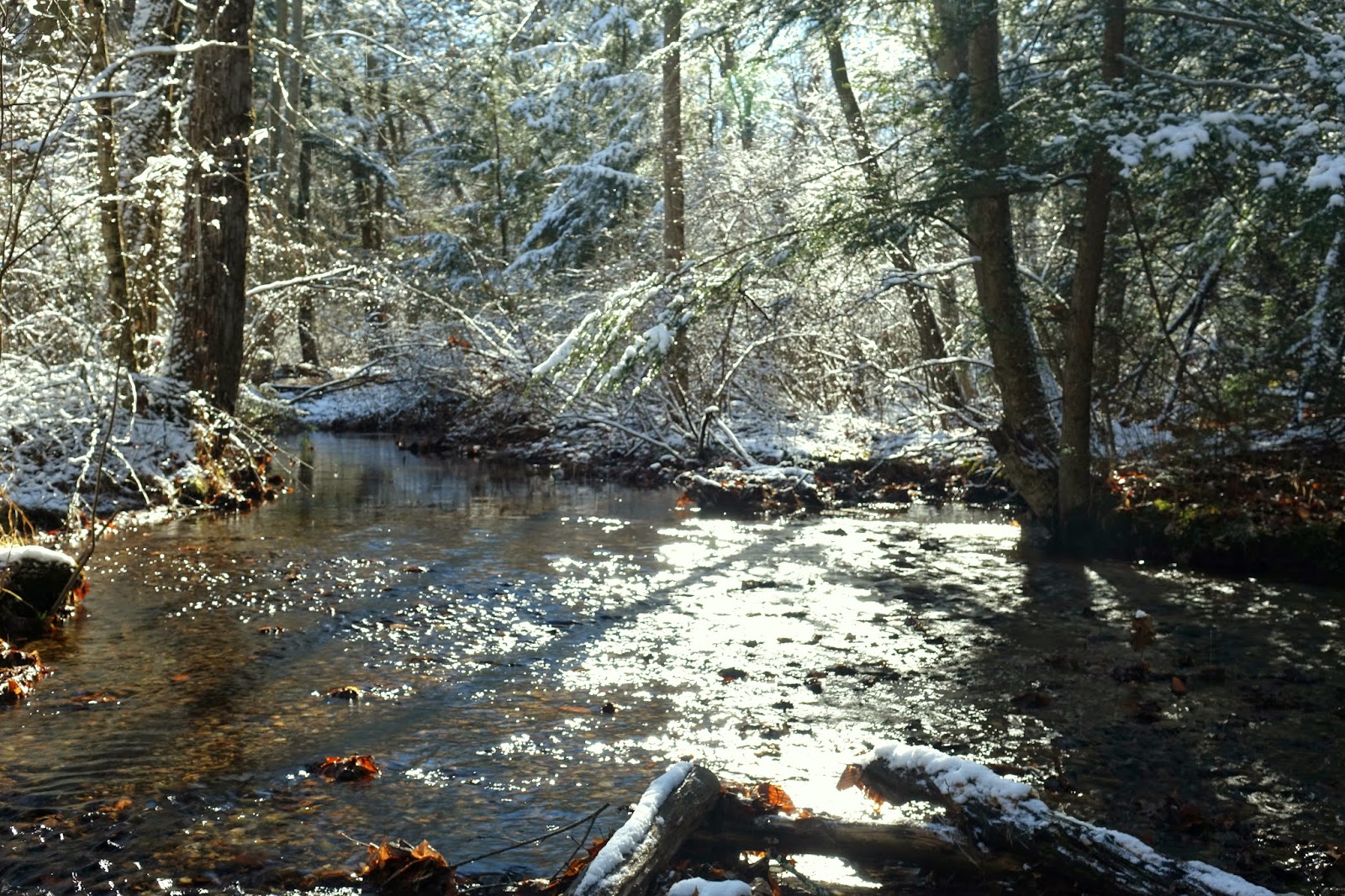 The last post asked the question can you still fish dries in December.  Well, yes you can most days even in snowy New England especially on small streams.  So with the forecast of some warmer weather I headed to a favorite small brook committed to the dry fly game.  A fresh snowfall the night before had the woods looking like a crystal palace as the sun tried to warm the cold earth. 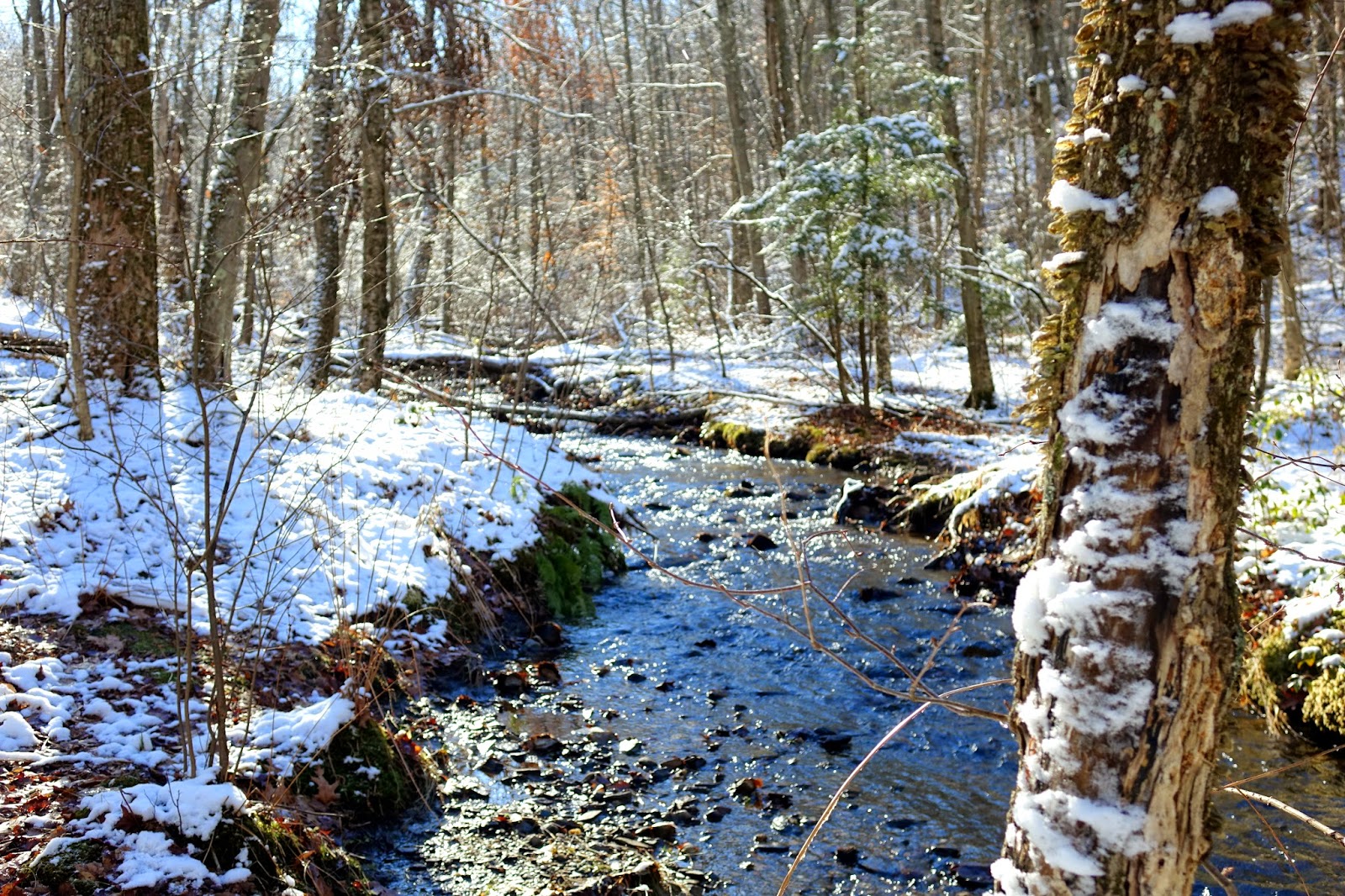 I was hopeful that the several inches of rain we received over the last week would move some of the fish around and have them looking for meal.  When I arrived, the small brook was a bit higher than I expected.  It wasn't long before a small brook took a few swipes at the small parachute Adams. Generally, things were slow but I did bring a few small brooks to hand and missed a couple larger fish. 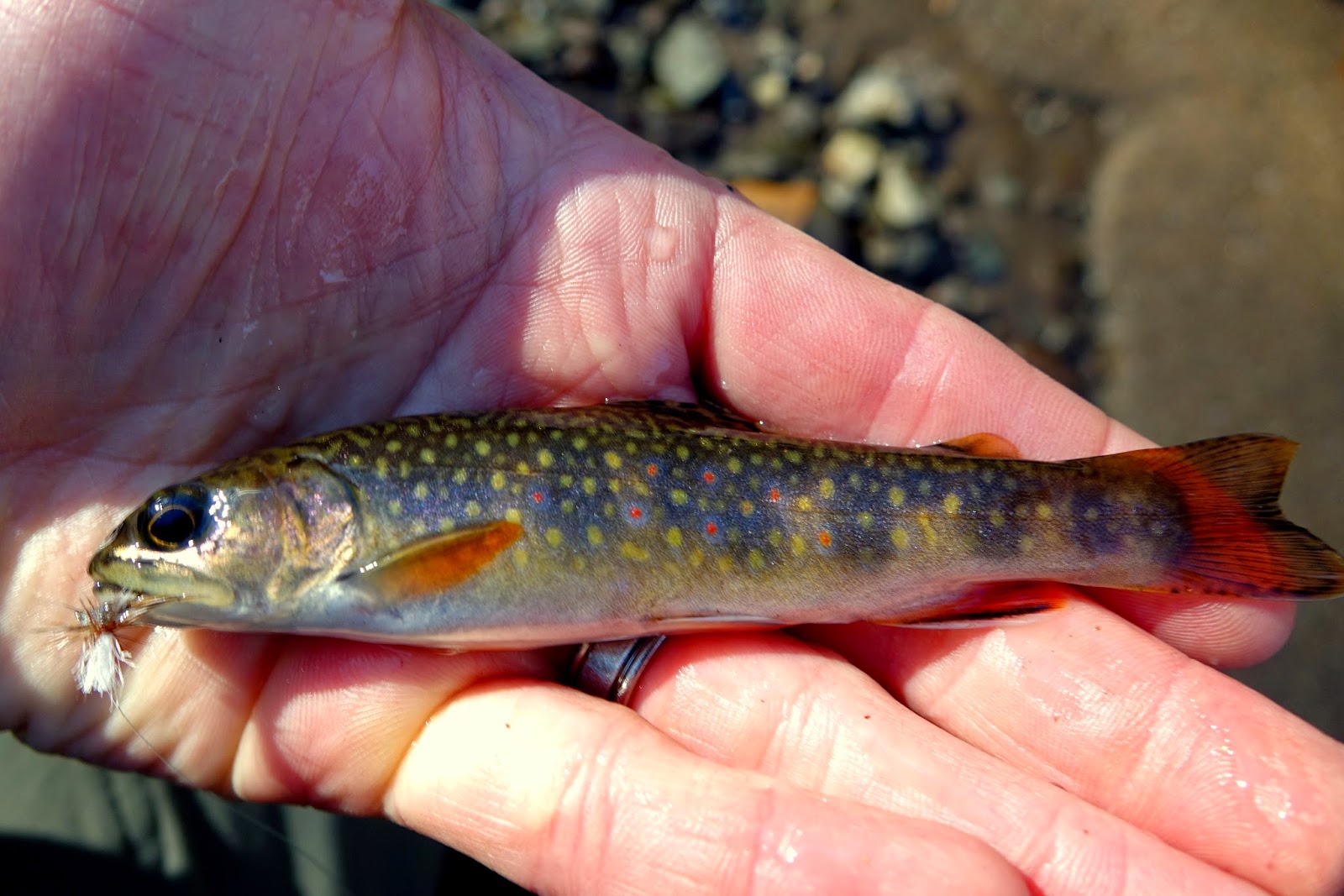 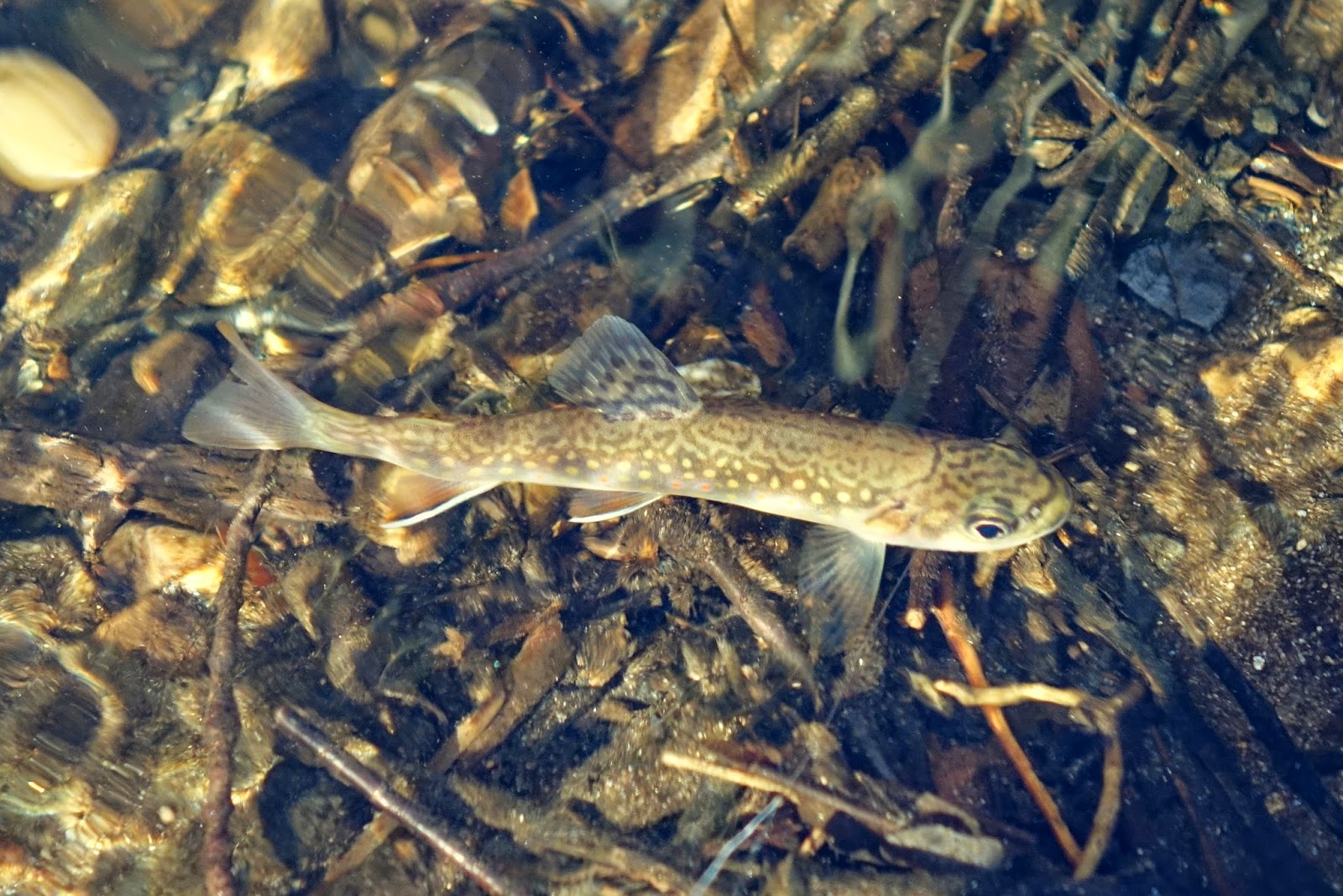 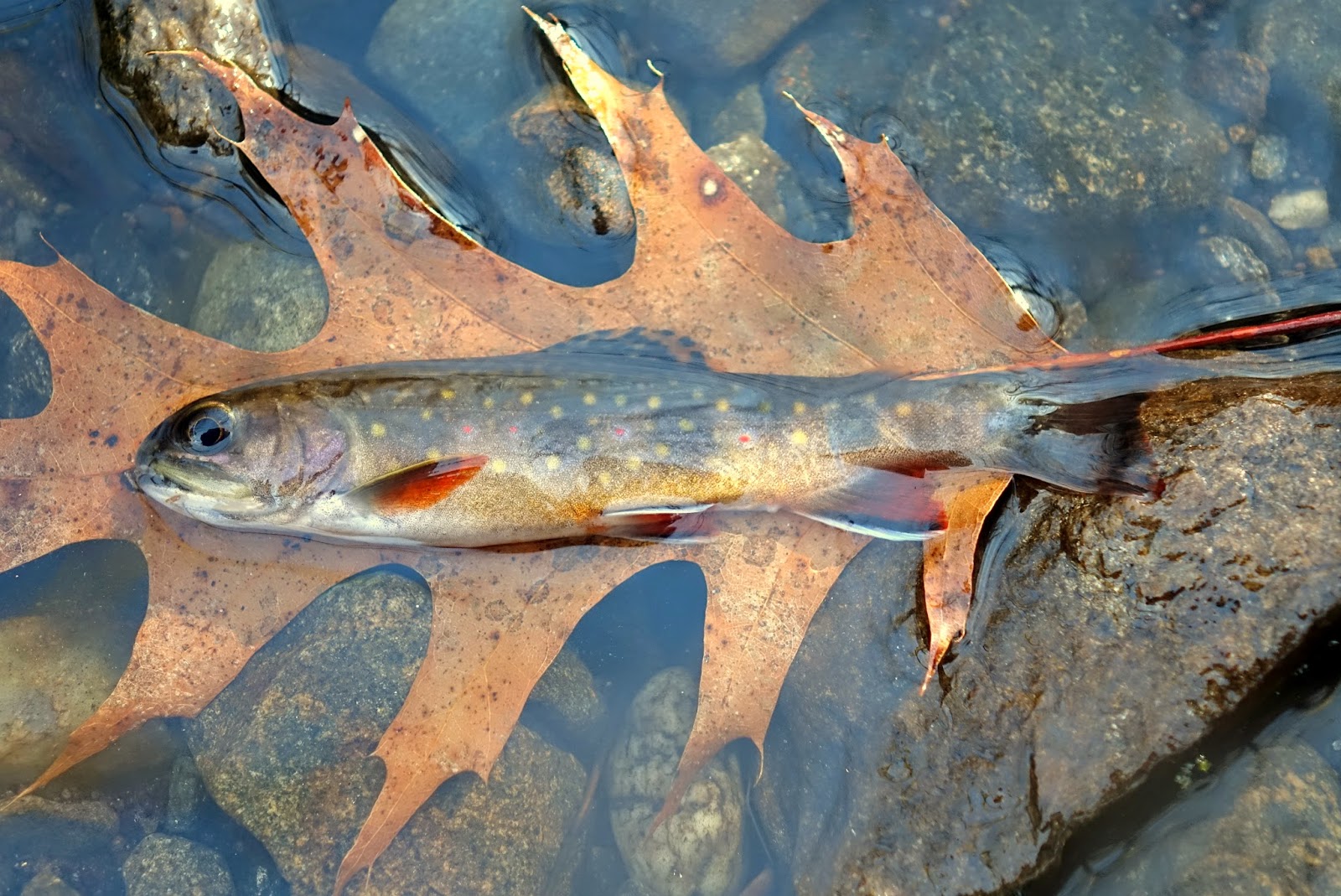 Can you still fish dries in December? 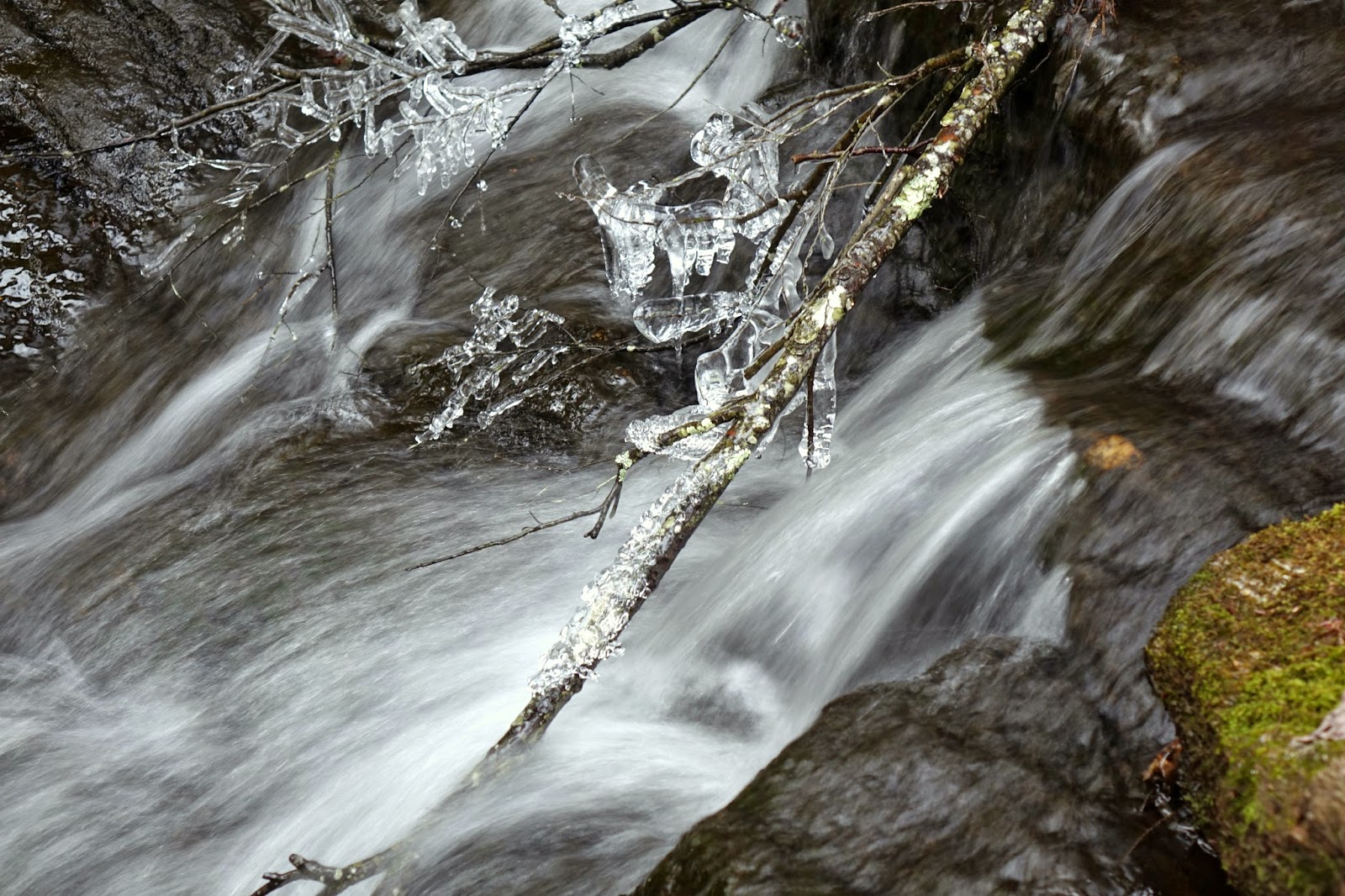 Can you still fish dries in December? Sometimes, but not this afternoon.  I tried a few early but with ice in guides and the air temperature barely above freezing it wasn't a very productive exercise.  Sometimes you just have to adapt.


It's December, it's cold and raw out, snow is still on the ground in the hemlock forest, and there is very little sunlight to warm things up so I put the dries away for the afternoon and put on a pinkie ( a pink San Juan worm variation).

Both Kirk and I brought some nice brooks to hand fishing the pinkie.  The fish were in the softer water as you would expect in this weather.  One big brook took the pinkie in a narrow channel but I was unable to set the hook.  After a second drift it rose again to chase down the pinkie and I missed again!  After a few minutes, I tried again and to my surprise it attacked the fly a third time!  This time the hook held and after a briefcase close range tussle, I was taking a picture of a lovely December brook. 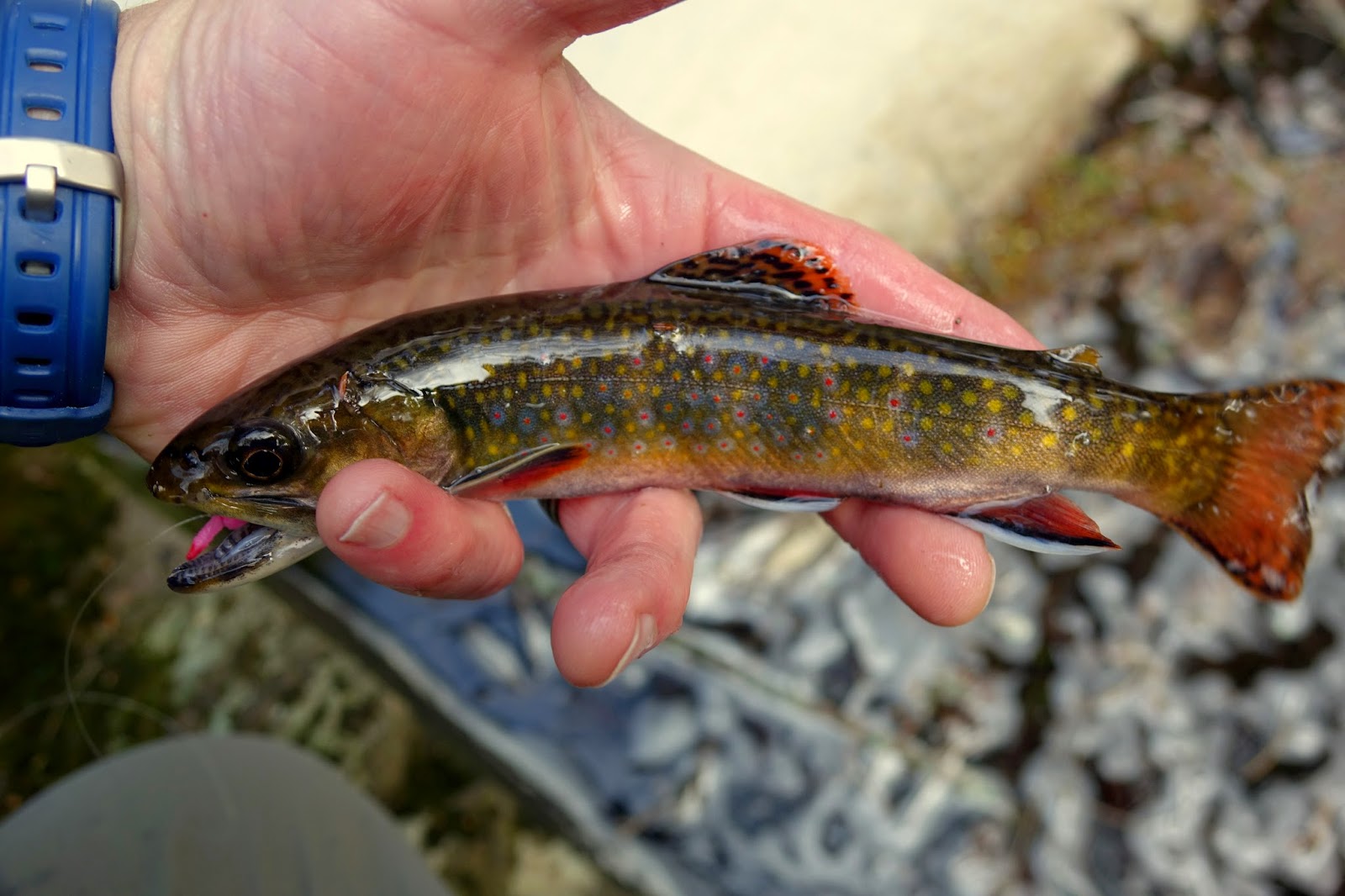 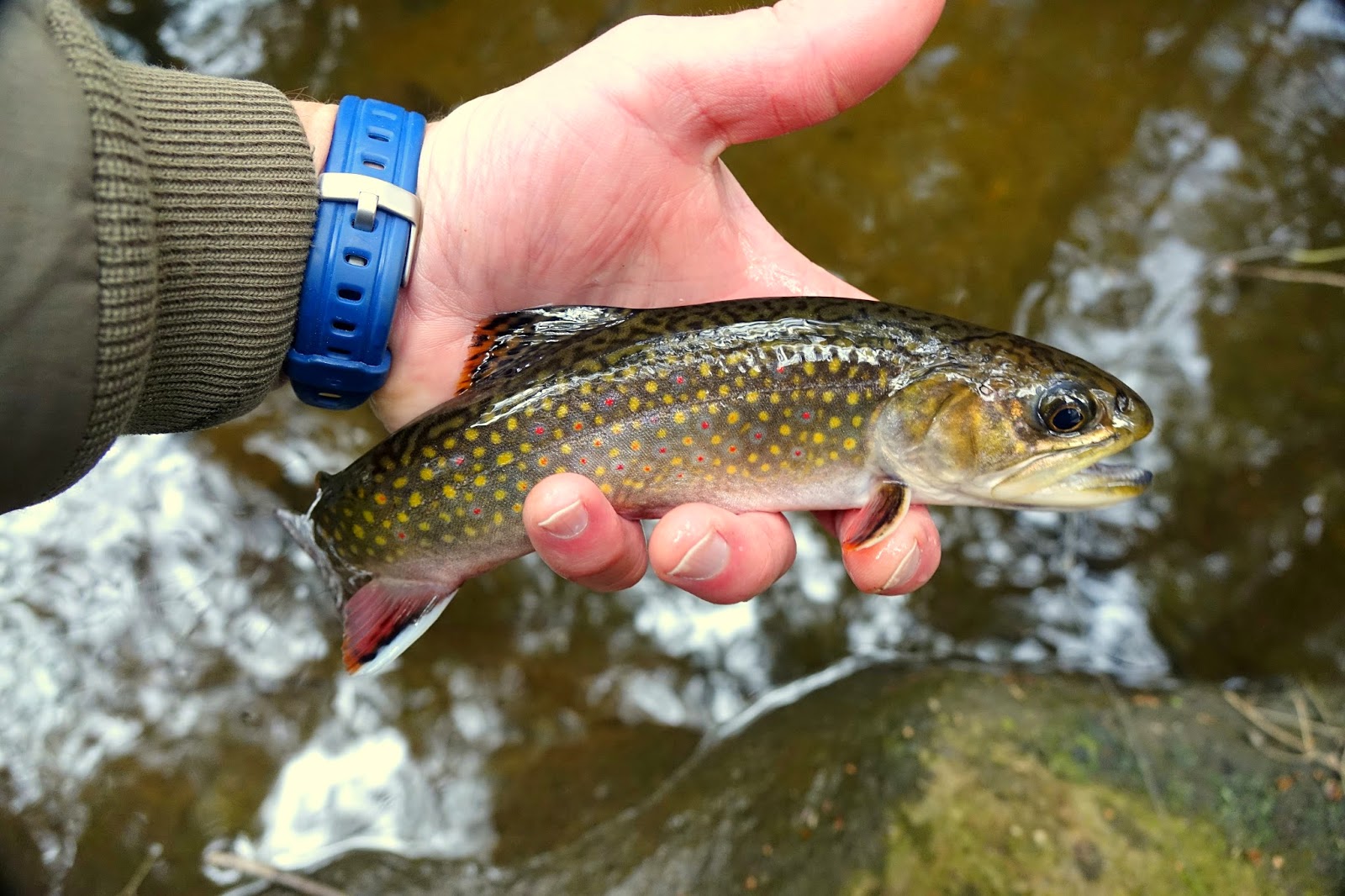 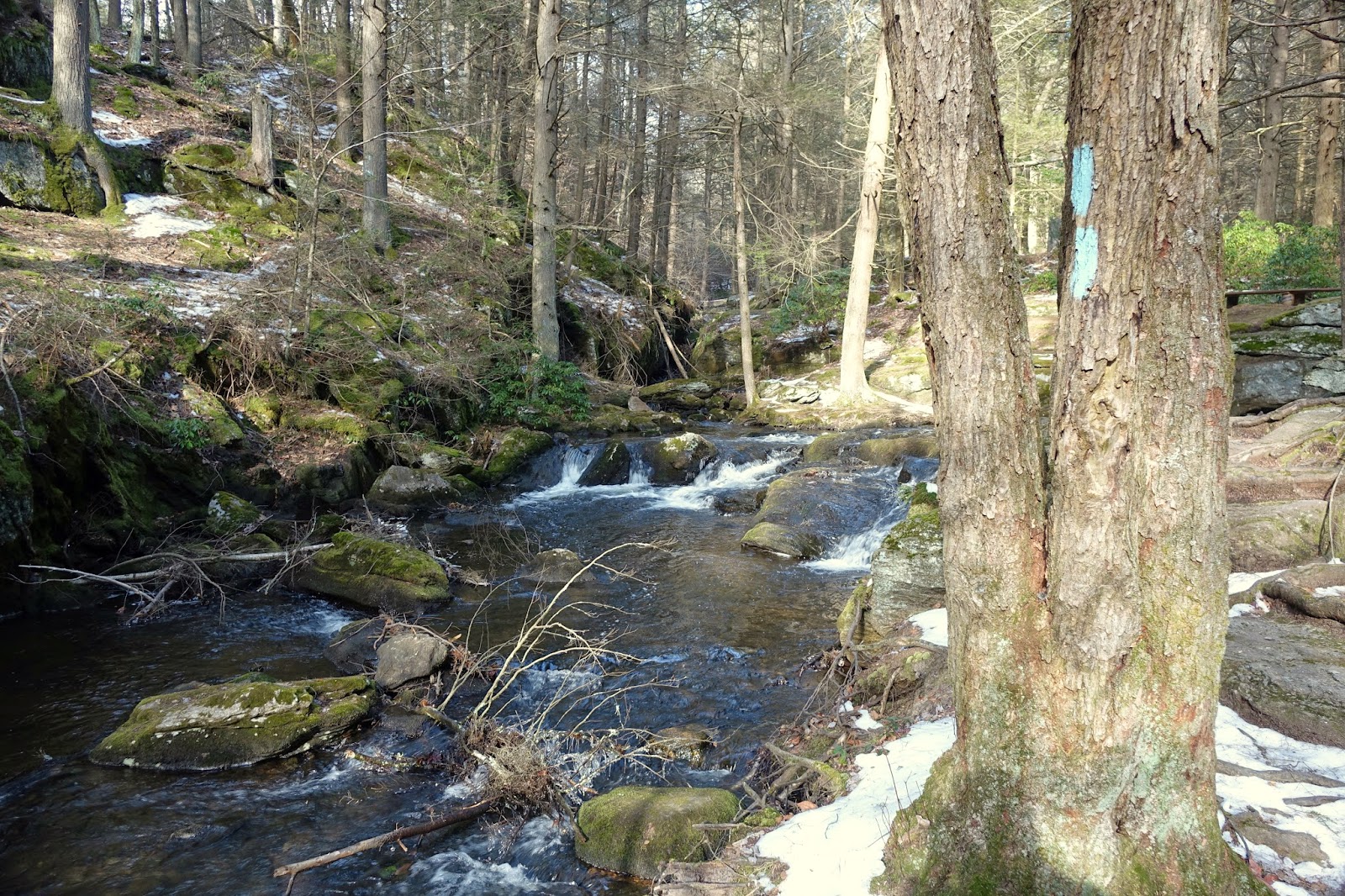 As we were walking out, we spooked a trout lying along the bank in some wet leaf litter.  I don't know why they do this but I have seen it many times in the winter months.  The trout ran out in the current and we watched it settle into the current.  I told Kurt to toss the pinkie out ahead of it to see if it would take it.  Again the trout charged it twice and before Kirk could set the hook on the third attempt.  All the brooks had pinkish bellies. 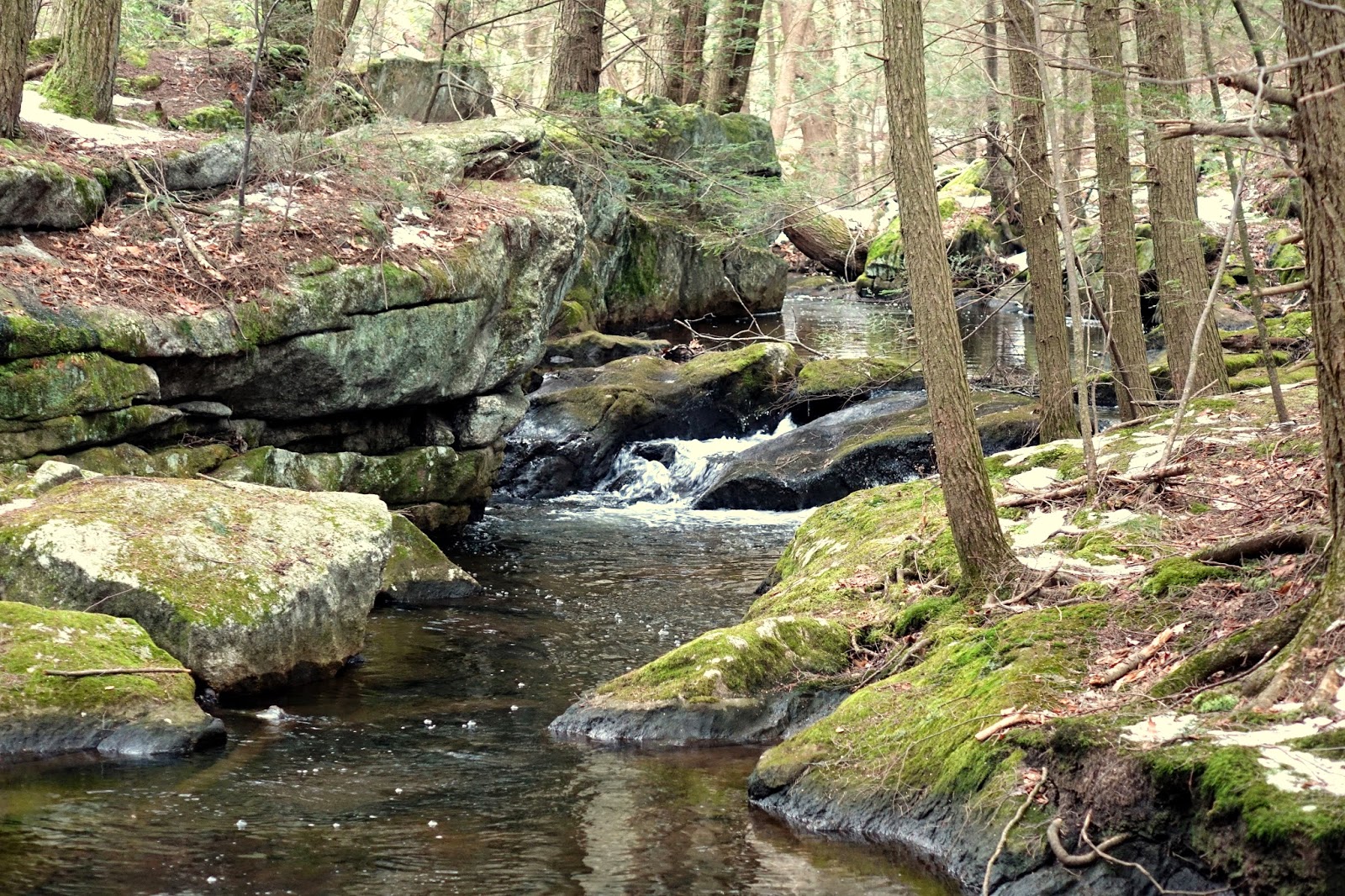 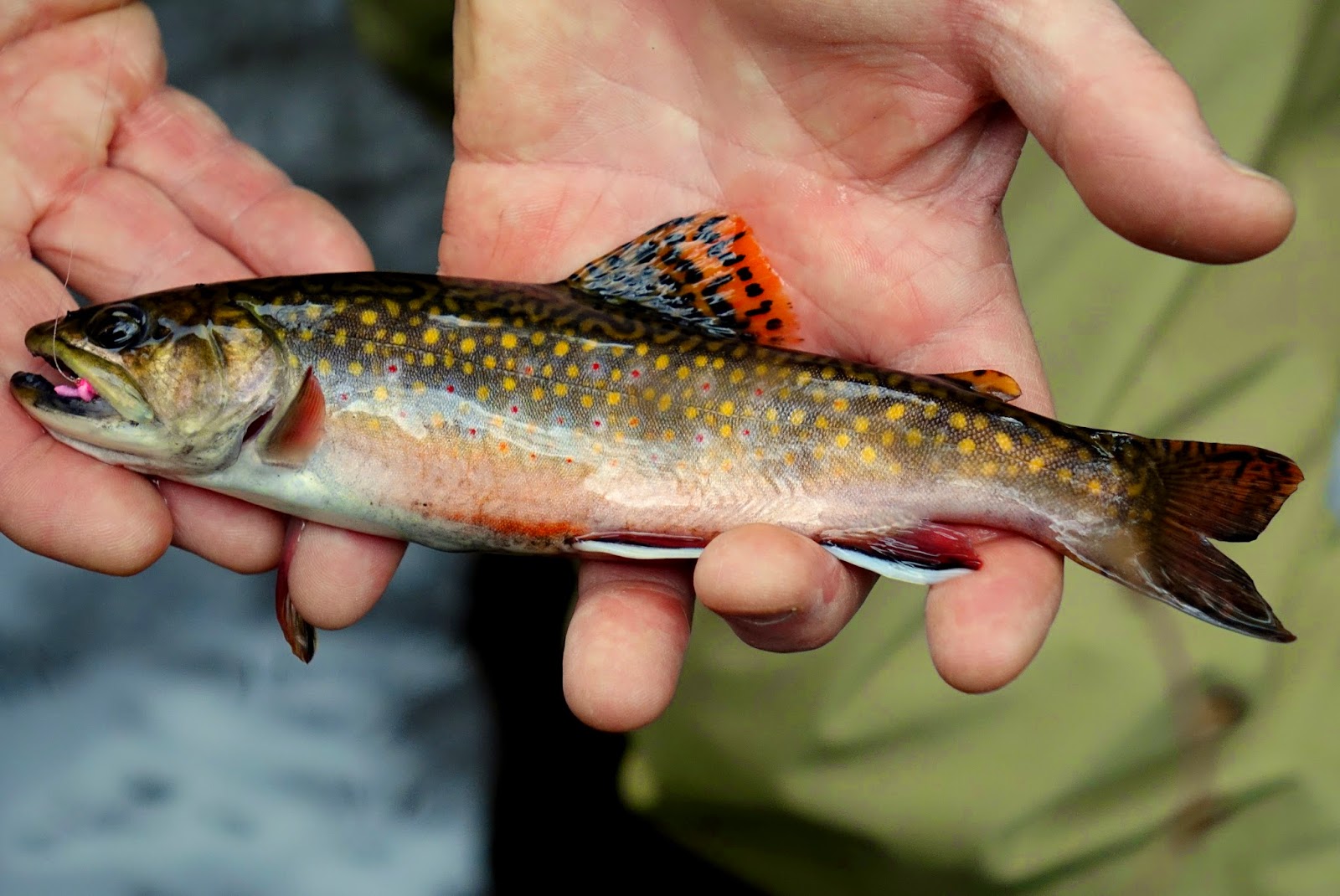 A few scattered snow flurries started to fall as we walked out among the Hemlocks.  After a stop on the way home for several cups of coffee and a late lunch, we eventually could get the hands working again.