This past Friday afternoon I revisited the Farmington.  The plan was basically the same as the previous Friday, nymphing during the afternoon and early evening and then find a riffle to wait out a sulfur hatch.  The afternoon was a mix of sun and clouds with the occasional passing shower.  There are lots of wildflowers in bloom along the river now.

I fished a half dozen locations during the day and late afternoon. Nymphing was productive after experimenting a bit with flies since my l go-to pattern this time of year (bead head pheasant tail soft hackle) was largely ignored. By varying the color and size I was able find that a combination of #12 super simple (gray); super simple #18 (brown), and a #14 green bead head caddis pupa worked in each location. I focused on the speedier runs and pocket water since these are where I find fishing weighted nymphs more fun and productive.


As evening approached, I started to look for a place to set up for the sulfur hatch.  There were a lot of fisherman out and I had to go deep into my mental checklist before I was able to find a spot.  The hatch was light where I settled but I did manage to bring three decent browns to the net on a sulfur parachute. The rises became infrequent a little before dark so I walked back to the car and call it an evening when I stumbled onto a spinner fall.  There were several subtle, consistent rises just a few feet from where I was standing.  I could see that although the rises were little more than a dimple, there were decent size fish coming up so I drifted the parachute among the rises and picked up another three before I lost the parachute in the trees behind me.  Since was too dark to tie another fly on, I finished the walk back to the car.   All in all another wonderful summer Friday afternoon on the Farmington.
Posted by MarkW at 3:33 PM 5 comments:

Yesterday afternoon I met with Pete (aka TROUTI) and we fished a couple spots on the Farmington.

When I met Pete he had already taken a handful of fish on a streamer but the afternoon was young.  I nymphed the faster water where I have found fish before and blanked, which really surprised me until Pete took me to school and nymphed the same run only closer to shore and picked up two.  I went back, put a heavier, brighter anchor fly on and worked the pocket water close to shore and brought three nice browns to hand, missed two and the hook pulled out on a third missle that took off for the opposite shore before I could turn it.  Lesson Learned :  after rain check the runs close to shore!


We moved to a location close by and Pete took a number of fish in a nice long run while I fished some rapids below him.  On the first cast, I had a brown come off the bottom to tear my bead head pheasant tail dropper right off the rig.  I never had a chance.  I picked up a nice little wild brown in another pocket and then headed up to see how Pete was doing.  The sulfurs were starting to come off and he had seen some fish taking them off the surface.  I waded out and tossed a sulfur parachute and picked off two before Pete headed home and I headed to another spot I wanted to check out.

The third spot has some nice pocket water that fished very well last year during the sulfur hatch. When I arrived everything was quite and no one was around including the fish.  So I moved to where I thought I might find some early evening risers and planed to stick it out until dark to see if the sulfurs starting coming off.


A couple guys fishing the water I was interested in so, I worked below them and figured they might not stick around too late.  I managed one brown on a sulfur parachute and worked up to my spot when one of the anglers left.  I found a rock to stand on and to get out of the frigid waist deep water and watch for rising fish.  The sulfurs never did make an appearance but there were a few fish sipping either small olive emergers or spinners.  I managed to pick off one with a #22 Adams parachute. There were a few fish steadily taking something small in the film just beyond my reach.  I thought they might be taking spinners but I didn't have any small rusty spinners in my box so I put on a #22 olive parachute and worked hard to get the fly over where the fish were working.  I managed to lay out a nice cast and get a decent drift and picked off a decent brown to finish off the evening.  At this point I was freezing from being in the cold water and I could barely feel my feet.  Even though darkness was about 30 minutes away, I really needed to warm up.   Who would believe I was driving home on a June night with the heat cranking, sipping some hot coffee!
Posted by MarkW at 8:48 AM 10 comments:

Back in the Adirondacks

The morning was a cool and clear and it was good to be back in the Adirondacks mountains again.  Strong thunderstorms the previous night had removed any traces of humidity from the air.  I knew the streams were going to be running strong so I headed toward one that I knew would be clear.

The rocks in this area are classic examples of Canadian shield geology and the stream is normally crystal clear.  As I approached, I could hear that stream long before it was in view and I knew I would have to find some soft pockets out of the thundering current to drift my flies.

I choose a Royal Wulff dry with a bead head caddis pupa trailed off the back in case the current was too strong for dries to be productive.   The wet rocks made navigating the stream a bit tricky but I was able to stay dry for most of the couple hours I had to explore.  Each fly was equally effective and a handful of handsome Adirondack brook trout were brought to hand.  It was great to fish some classic Adirondack water again after a long winter.

the trout zone - exploring-smokies-small-streams-fly-fishing
Posted by MarkW at 8:27 AM 2 comments:

The Farmington River was up and slightly off-color so nymphing was the way to go.  A dozen or so (I quickly lose track) strong browns and rainbows were brought to the net.  Nothing trophy size, but nothing less that 14 inches either.  Fish were taken on #10 Rock Candy, #12 super simple, but the bead head pheasant tail with a couple turns of partridge accounted for most of the fish.  It was nice to be out fishing close to home again! 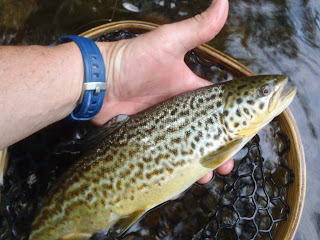