This evening after work I thought I would go looking for some small stream brown trout.  It's been hot and dry here in southern New England. The stream was low but cool.    On the first cast into the head of a decent pool I was able to connect with a hefty wild brown that put up quite a battle.  A couple more wild browns attacked the Ausable bomber and one brook trout. 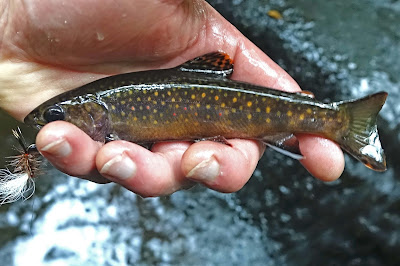 A cold tailwater on a hot day

Even though the day was a warm one in the middle of July, but here in CT we are fortunate to have a cold tail water fishery close to home.  I spent the afternoon nymphing an off-the-beaten-path location. Among the handful of browns and a rainbow was a handsome stream born brown.  Caddis pupa was the fly of choice. 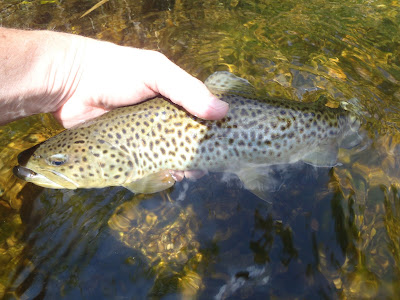 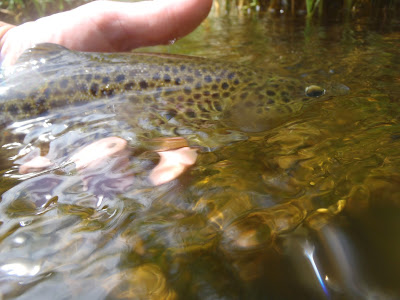 Late afternoon, I decided to try and find a place where there might be some fish taking dries.  After checking out a couple potential spots, I settled in for the evening.  Early in the evening there were fish taking small sulfur emergers.  I caught a mix of browns and another rainbow on the #18 sulfur comparadun but there were a number of refusals leading me to think that the fish were actually taking something smaller.

After some early evening action, everything got quite with only an occasional rise here and there.  As soon as darkness started to settle in things picked up significantly.  In the remaining light I was able to take a couple fish on a #20 rusty spinnner.  The fish continued to take spinners well into the darkness.  At this point I could barely see so I was fishing slightly downstream trying to feel the takes before a nice fish broke off the 5x and I called it a night.
Posted by MarkW at 8:48 PM 6 comments:

During a week in the Adirondacks, I was able to explore three diverse streams and enjoy a hike up Snowy Mountain with the family.  The three streams differed in their tannin levels, gradient and geology. Many may not realize the Adirondack hemlocks were sought out, felled and stripped of their bark to supply the local tanneries.  Streams that traverse these hemlock stands often are dark and stained.

The first stream explored has crystal clear water and runs over the reddish rock of the Canadian Shield.  The day I visited the stream was quite high from several days of rain.  This meant that much of the stream would not be accessible since the high flow precluded hoping from boulder to boulder to fish both sides.  With a little work, I was able to find some areas that were fish-able and where brook trout were willing to come up and chase a Royal Wulff.  Several times I could see the back and orange flanks of a brook trout rise up out of the turbulent water.  One fish was particular entertaining to watch come up clear out of the water jumping over the Royal Wulff without connecting.  After sevearal attempts to hook the fish, I switched to a yellow neversink caddis since I had noticed a few small yellow stoneflies in the air and this fly the fish took with abandon.

The next day was clear and cool, a perfect day for hiking!  The family decided that we would climb Snowy mountain which is an 8 mile loop with about a 2000 vertical ascent.  It was a gorgeous day for a hike and the views from the fire tower were certainly worth the effort.  With all the recent rain the trail was more like a small river with water running everywhere and several challenging stream crossings.


The following day I met Todd to fish the high gradient tannin stained stream in the previous post. The reader may be interested in comparing the distinct coloration of the brook trout from each of these streams.

The second stream visited was a moderate gradient stream. This stream was also a lot higher then I usually see it and it was a pleasure fish it with such a good current. I've seen caddis on this stream many times before so I fished an brown elk hair caddis with good results rather than my usual Royal Wulff.  Several brook trout were brought to hand from the likely places indicating that the stream has wintered well. 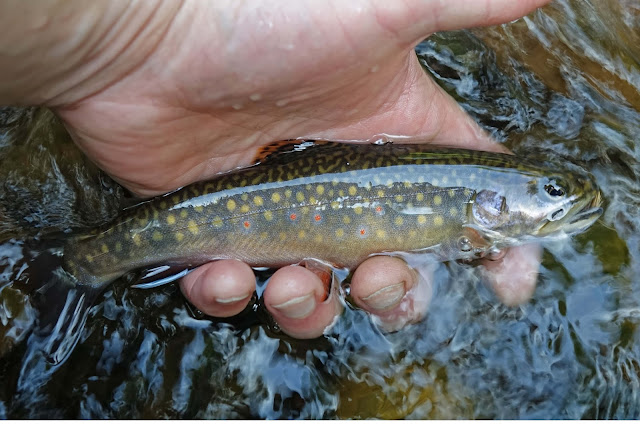 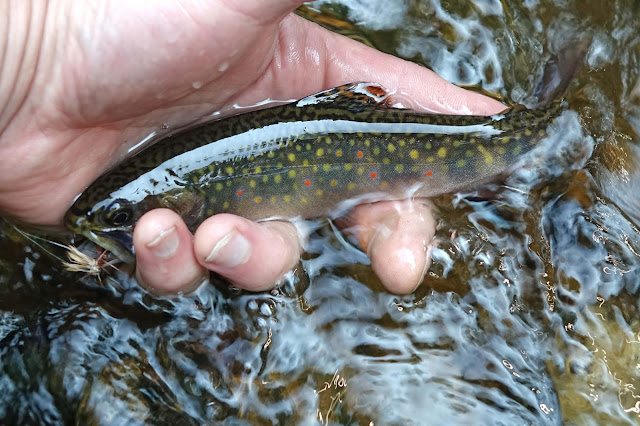 My final outing was a revisit to the first stream several days after the rains.  The flows were more moderate and I was able to navigate the rocks to fish more of the stream.  I started out with the Royal Wulff but after watching a couple fish look over the fly and return to the bottom, I switched to an Ausable Bomber, reasoning that a more naturally colored fly would do better under these conditions. The Ausable Bomber brought several nicely colored brook trout to the surface and then to my hands to be photographed and returned to the water.

Friday afternoon Todd and I finally met up to fish an Adirondack brook together.  We have both fished this particular brook and exchanged information over the past couple years but we have not been able to find a time we could both fish together.

The hike in was pleasant and a great time to catch up and exchange some information.  My first look at the brook was encouraging.  My exploring earlier in the week had indicated that the area streams were very high from all the recent rain the Adirondacks have had so far this summer   After dropping in off the trail, the first pool we came to was a lot higher than I have ever seen it, meaning we would have to adapt our approach.

There was a rush of water coming down my favorite slide that pretty much blew out the entire pool.  After trying some of the soft spots as well the next pool up, we decided that we should move downstream and probe the edges.  Todd worked one side and I the other.

We were both able to coax some brook trout to take a Royal Wulff even in the high, tannin stained water as we quickly moved along the edges of the brook, attempting to cover lots of ground.  As our time was running out, I wanted to hit particular pool before calling it quits, since it has given up some decent fish over the years.  I pointed the spot out to Todd and after patiently working over a couple likely areas he eventually had a nice bend in his rod and I knew that he had decent fish on.  After a final picture we ended our afternoon together on a high note and hiked back to the car.