Yesterday I explored some areas on the Farmington for the first time.  I like to say that fishing was great but it really was a rather slow afternoon.  I did manage to find one wild brown sitting just off a shallow bank.

Later in the afternoon I saw some small olives coming off and fooled another two browns on a #20 dark olive parachute and missed another.  One of the fish had scars on it's flank from a fairly sizable set of teeth.

I decided to hang around til dark and see if there would be spinner fall.  There really wasn't much of one but I did manage one decent brown on a small rusty spinner.

I had spotted another fish rising within casting range so I kept casting the spinner over it and eventually got it to take the fly.  It was a respectable sized fish and I got it close to the net but sometimes in the dark it's tough to tell exactly where the fish is and where the head is.  I didn't get the net in the right position and that's when the fun started...All of a sudden my rod tip went down and the fish was pulling hard for the bottom.  The next thing I knew, line was peeling off my reel and the fish headed like a run away train for the opposite bank.  I tried to slow it down and put more drag on the reel but it wasn't stopping.  In desperation, I tried to stop it and gain control before it ran my line around something but the line went slack and I was looking at my small rusty spinner once again.

So help me out here, what do you think happened?  Did the fish I had on go into overdrive?  Please share your thoughts and stories in the comments section!
Posted by MarkW at 2:47 PM 8 comments:

A quick video my daughter put together of our hike up Snowy Mountain in July.  Lots of water in the mountains back then!

August in the Adirondacks 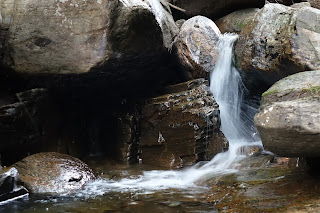 The Adirondacks are starting show signs of the coming fall.  That almost imperceptible change in the late afternoon light, the slight tinge of red in the tips of the branches of the sugar maples, the cooler nights and mornings, all point to the changes ahead.  August can also be a dry time in the mountains as well, when the streams that a couple of months ago were loud and boisterous are now quite subdued.  A quick check of the water temperature is must this time of year, since not all mountain streams remain cold during these dry times. 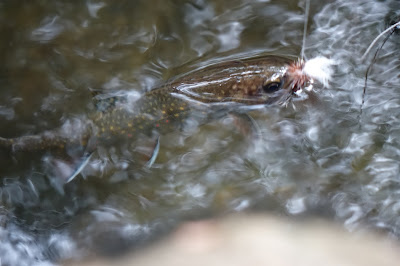 After checking the thermometer, I did fish a bit in the deeper holes and pockets but I was really more surveying than fishing hard.  This is not the time of year to be fishing every little pocket and channel. Fortunately the brook trout seemed to be holding their own,  finding places to hide under the rocks along the banks or in a deep pocket here or there.  Mostly I just watched them attack the Royal Wulff and then quickly return to their hiding places. 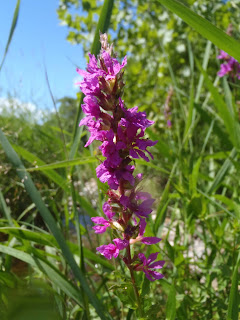 The fun and challenge of fly fishing for me is the observing and adapting to whatever is happening at the moment.  This requires you to be alert and engaged, thinking through what you are observing and processing it through your past experience and knowledge.  I was reminded of this just yesterday.

I was nymphing an area that I can usually find a few fish and came up blank which was a little puzzling.  As I was heading back to the car and about to cross a small shallow run when I stopped for a moment.  Here a small volume of water passes quickly along a grassy bank before rejoining the rest of the river.  About a foot off the edge of the bank I noticed a small channel roughly 18" deep.  Most of the year there is a strong flow of water along the bank such that you would not expect fish to hold there and I often cross it without much thought. However the water level was a bit down and I noticed the reduced flow. Knowing that in the summer months fish tend to work up into the faster pockets close to banks where an ant or beetle might fall into the water, I wondered if a fish might be holding there.

This would have been an ideal situation to fish a dry dropper rig with a small nymph trailing a stimulator but I had left my dry fly rod in the car.  The double nymph rig I was using was too heavy to fish this shallow channel without getting constantly hung up on the bottom so I clipped the anchor fly off and left the 18" of fluorocarbon hanging behind the pheasant tail dropper.  After a couple drifts close to the bank, I connected with a brown that used the strong current to his advantage and eventually the hook lost hold.  Nevertheless, I was pleased to have worked through the situation mentally and connected with a fish.  I worked the nymph again further up the run and connected with another brown, this one was larger and stronger.  Not wanting to repeat my mistake of being out of position to effectively land the fish, I jumped off the bank and into the water to try and maneuver the fish into a more favorable spot to land it.  After a couple runs it decided to head downstream over some shallow riffles and rocks into the pool below.  I just followed as I knew that if I could stay connected I had a better chance of landing it in the pool below.

I jumped around to a few more spots with nothing to show for my efforts but decided to end the afternoon fishing some shallow runs close to the banks and found another brown that took the pheasant tail dropper fished behind an olive stimulator.  Not a productive day in terms of numbers but satisfying and a good reminder to stay alert and engaged. 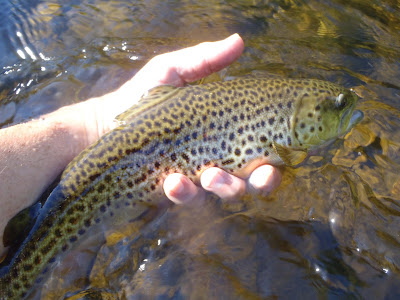