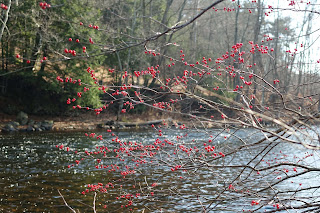 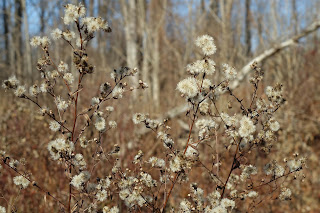 When I was young we used to go to my Grandparents home out in the country for thanksgiving.  One of my favorite memories was hunting with my Grandfather and cousins early each Thanksgiving day.  The day would usually be cold and after walking through fields and woodlands we would hike back to the warm house and enjoy a hot meal together. Even though the leaves are gone and the earth is blanketed in the grays and browns of late fall there remains a unique fondness and warmth deep inside me when I am outside in the cold around thanksgiving time.


Walking along the river this morning brought those memories back to mind. I was reminded of all the many blessings God has brought into my life, God's overwhelming gospel love for me, family, friends, provision and health but also the blessings that I often overlook like the brightness of the sun on crisp fall day as it dances on the river. 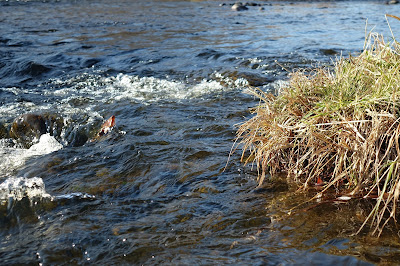 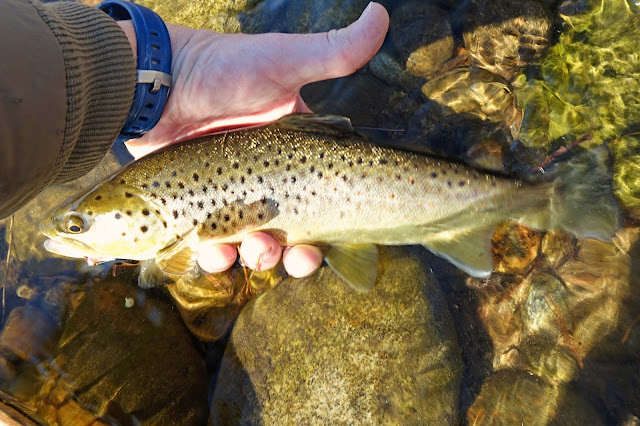 Happy thanksgiving to you and your families!
Posted by MarkW at 7:27 PM 20 comments:

It's been a pretty dry fall this year, but a nice day of steady rain sure improved things on the small brooks.  This afternoon it was nice to hear the sound of moving water, the brook trout were eager to chase down a dry fly and all was good.

I changed flies a bit early in the afternoon starting with a small Adams parachute.  The brook trout would rise to it once and gently nip but not really take it.  I had a few chase down a mini muddler but the action picked up quite a bit after the Ausable bomber went on.


A lung full of cool November air and brook trout erupting on dries makes for a very nice afternoon. 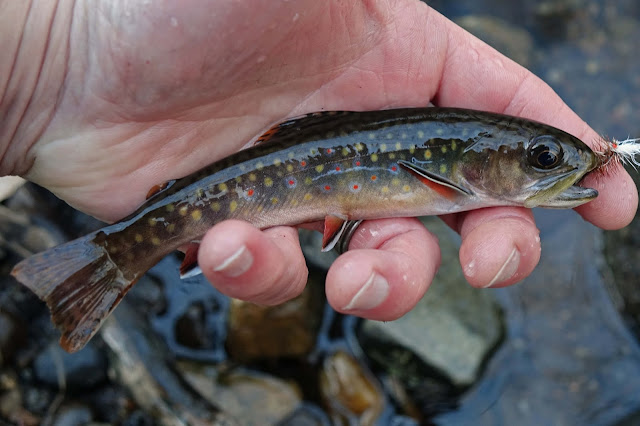 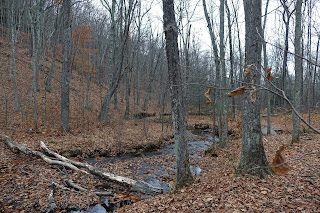 What a difference a week can make in the landscape in November.  Kirk and I meet to take a walk along the same woodland stream that I visited last Sunday afternoon.   Yesterday, all the leaves were down and the woods were dressed in the drab grays and browns of late fall.  The temperature however was anything from a usual late fall day!  By mid morning we were down to short sleeve shirts as the air temperature pushed above 70! But this was only the first of some unusual things we observed.


This woodland stream drains into a pond that is stocked by the state and as we were walking upstream Kirk spotted two large fish in a sandy area of the stream.  We think they were two spawning browns by the way they were moving around.  We watched them for a while as they would hold steady and then rapidly circle the small pool.  It was kind of like watching two large dogs playing in a kiddie pool because they were so large compared to the area they were in.


I had decided to fish a small Ausable bomber and I stuck with it the entire day.  There were lots of small fish that would nip at the bomber but only a few larger brook trout that would actually take it.  Quite a few fish were holding in the tails of the micro pools and often in the wet leaf piles that would build up in the shallow areas there. Approaching each pool was a challenge and more often then not I would see a nice wake form as another fish rocketed out of the leaves. 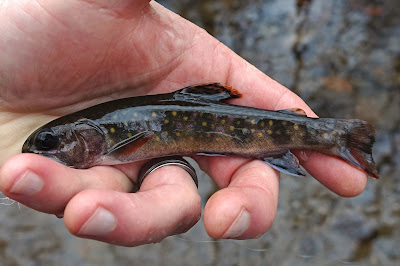 A few small brook trout were brought to hand as well as a handsome wild brown and a small rainbow. I've caught the odd wild brown on this stream and will sometime find a rainbow in the fall but never all three on the same day.  It definitely was an unusual day! 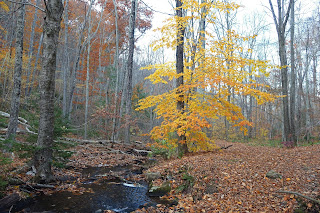 November is here and the colorful leaves of autumn are soon to become a fond memory.  The woods that were once alive with color are now a monochromatic yellow.  I find that sometimes I just need a quite walk in the woods to refresh the soul.

By mid afternoon I was walking along a favorite woodland brook, one I had avoided during the dry summer and early fall.  It was pleasant to hear the flowing water again and breathe the sweet aroma that fills the woods when the leaves are falling.

This was a day to just enjoy being outside, to enjoy watching the fly glide through the tiny riffles and into slow water at the tail of each miniature pool.  It was in the slower water that the brook trout would show themselves, slashing once at the parachute Adams and then never to appear again.  Several beautifully colored brook trout were brought to hand, some showing the bronzed bellies of fish getting ready to spawn and others more muted in coloration.