With the latest Nor'easter covering most of the east coast it was a good day to do a little tying.  Today I was restocking the small stream box.  When it comes right down to it, I love fishing dries on small streams.  I fish nymphs and soft hackles but I just like fishing dries even when conditions dictate that there would be a better choice.  I am also a minimalist so I don't carry more than is needed and it when it comes to small stream dries, there are basically 4 flies that account for most of the wild brook and brown trout that I catch.  So here they are...

Royal Wulff:  I tie this with woodchuck guard hairs for the tail and use a Mustad 9671 hook.  I like the longer hook since it gives extra room for a nice body and plenty of hackle to keep it afloat.  I will fish this fly in the spring through fall but I've caught fish through out the year on this fly.

Ausable Bomber:  This is another small stream fly that I wouldn't be without.  It's a Fran Better's fly but for some reason it's not that well known.  It uses the 9671 hook, a white calf tail wing, woodchuck guard hairs for a tail and brown and grizzly hackle palmered over a body of rusty orange possum dubbing.  I have no idea what fish think it is but it works any time of year.  I fish this one in #14 and #16 in the colder months.  With the woodchuck and heavy hackle this fly floats well and is an excellent dry for a dry dropper rig.

Elk hair caddis: There is nothing special about this fly.  I don't fish it as much as the other three but in the winter months when small stoneflies are coming off I will fish a #16 or #18 with dark brown body

Parachute Adams: I like tying these with a woodchuck tail and muskrat dubbing.  I fish this fly in #16 and #18 in the colder months.  If the larger Wulffs and Bombers don't draw any interest I will put one of these on.  I tend to fish these more in the later fall and winter when small flies are a better choice.
Posted by MarkW at 6:31 PM 35 comments:

January ice and the dry fly 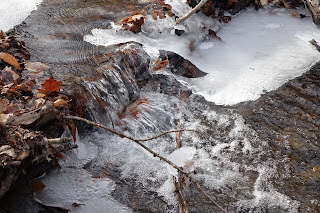 I took a quick walk along a small stream this afternoon.  There was lots of ice along the edges from the cold snap we had earlier in the week making for lots of interesting cover for the fish.

I ended up fishing a small elk hair caddis after seeing a number of stone flies in the air and a few rising fish here and there.  For the most part the fish were tucked under the ice shelves but were eager to ambush the dry as it passed by. 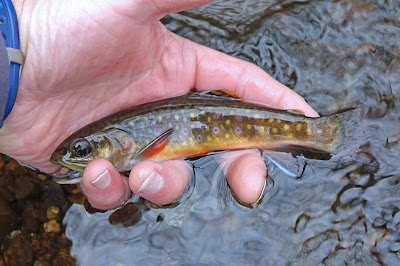 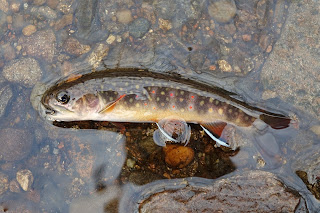 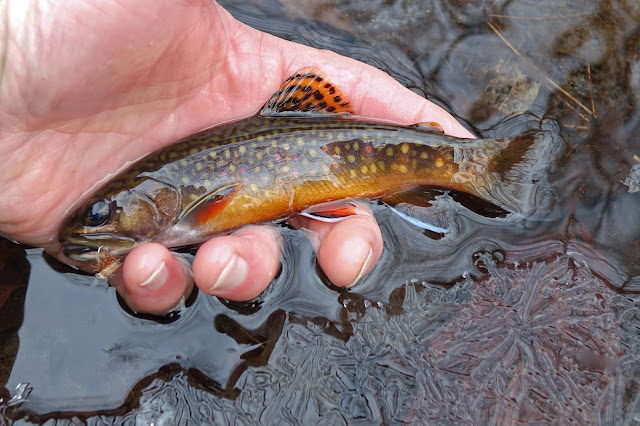 It was another gray winter day to welcome the New Year but without the threat of frozen guides and a biting wind that opened 2015.

As in year's past , the usual suspects gathered at a small stream of Alan and Kirk's choosing. This year Alan, Kirk, Pete, John and myself were joined by Rowan to continue a First Day tradition that goes back quite a few years.

The stream was quite full and I quickly realized that my dry/dropper rig that worked so well a couple days previous needed to be modified so I switched to pink San Juan worm.

After the switch, I worked a very nice looking seam that offered up the first brook trout of 2016. 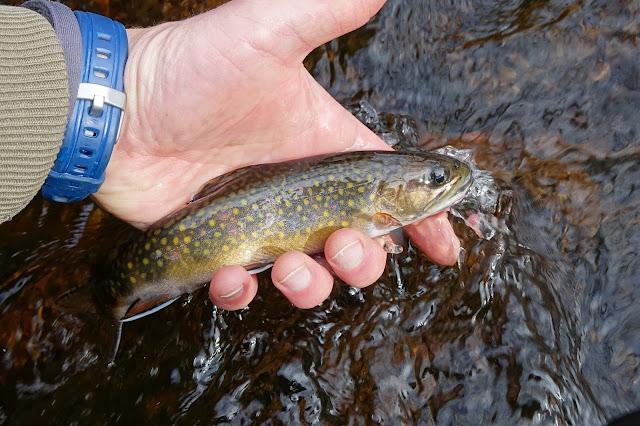 Late in the morning a bunch of us were chatting when Rowan noticed a fish rising in a back eddy. He tried several approaches but was not able to find a way to get a fly in front of the fish.  It's challenges like these that make fishing small streams with tight bank side cover so much fun.  As I was watching him, I noticed another fish rising 3-4 inches off the bank under a pine tree just down stream of me. Whatever it was rising to, it was small so I put on a small parachute Adams thinking it might be taking midges in the surface film.  After surveying the problem for a little, I thought it might be possible to cast the Adams to the opposite bank and let the current carry the fly under the pine branches that were just a couple feet above the stream and up against the bank where the fish was working.  A slight tug provide enough slack to give a decent drift as the fly passed under the pine branches and up against the bank and another slight retrieve positioned the fly in front of the fish and brought a quick response.  After a brief tussle the first brook trout of the year on dry fly was in my hands and quickly on his way home a little wiser for the experience.

We met up back where we had parked the cars and began heating up lunch.  Alan had a charcoal grill going on which he boiled some homemade hot dogs and a stove with some homemade baked beans that really hit the spot while I was heating up my first attempt at homemade chicken soup.  Some wonderful  warm food and plenty of fish stories finished off the day before I needed to head home. I am certain the rest of the crew were able to find a few more fish in the afternoon.