Three reasons not to leave your camera at home, EVER!

#1)  Who wants to read your boring post with only text (like this one)!  I am reminded of those summers when I was young when my mother would take me to the library every week and insisted that I take atleast one book out to read.   My choice was always quick and solely based on the ratio of pictures to text.  Let's face it, pictures keep us all engaged.

#2)  When you are out in a canoe on an Adirondack Lake because the streams are too dry to fish and you see the most amazing sunset, you'll want to take some pictures because you are never going to see another one like it and trying to describe is pointless unless you are a REALLY good writer!

#3)  When you are out in a canoe on that same Adirondack Lake and you are tossing a popper for the odd rock bass or small mouth just for fun, and you tie into the biggest small mouth you've ever caught in your life...you will want that picture to prove it!  Especially since we all know that fisherman exaggerate! (its was 3lbs if it was an ounce!)

A lesson learned on an Adirondack Lake just this past week!
Posted by MarkW at 12:14 PM 15 comments:

I've had the pleasure of meeting some great people fishing.  Some I've known for a few years and others I've met recently. This past friday afternoon, I met up with Mike and his son Dan. Our friendship began through email and this past spring we were able to meet face to face and enjoy some time on the river together.  After that spring afternoon, we promised to fish again together soon. Two months have flown by and we finally managed to both have an afternoon free, so  plans were made to fish the same section of river that we fished in the spring.  I was curious how it would fish a couple months later.  Before Mike and Dan arrived I nymphed some heavier pocket water and did pretty well finding browns and rainbows behind the big boulders and in the deeper slots between them.  I even managed to find a good sized brook trout.  The wear on the front fins and a gill plate that didn't full cover the gills indicated it was a stocked fish.


As the afternoon progressed there was a nice hatch of isonychia coming off.  We could occasionally here a splash as a fish would take one in the fast, boulder filled runs.  The birds on the other hand were making the most of the table spread before them.  I took a break to enjoy the aerial circus, as  the cedar waxwings dove and turned to intercept a recently hatched bug.  The number and speed of the birds made me wonder how they avoided flying into one another.


With a good number of isos hatching, I thought that I could tempt a brown to take a large comparadun in the boulder runs if I could get a decent drift and sure enough, a nice fish took it.  I had a battle on my hands to stay connected, as the hefty fish headed through the boulders.  I managed to hang on for a little but eventually the fly popped out.  I never really got a look at the fish.  I had another take or two but again, nothing brought to net. Even though the fish have a edge in this type of water, I love fishing big flies in heavy current.

Late in the afternoon, I said goodbye to Mike and Dan and headed to another area to meet Scott.  It was a beautiful evening on the river with the sunlight filtering through the trees, giving the entire landscape a soft, dreamy glow.  Again we were fishing faster water and noticed some large cahills coming off.  Scott tied into a bomber of a brown and had his hands full.  I headed up to see if I could assist but before I was able to get into position to net the fish, out popped the fly.  The highlight of the evening for me was spotting
a nice fish occasionally rising underneath some low hanging trees and just in front of a large rock along the opposite shore.  The current between me and the rising fish was strong and the only way to get a good drift into that tight corner was to get above it and cast down and across and feed line to get a decent drift.  When the fish moved upstream slightly, I was able to put the fly over it and it was game on!  After a handful of strong runs, I managed to guide it out of the strong current and behind some boulders where I could chase it down and get the net underneath it.

After a little bit another fish was working in the same spot but closer to the large rock tucked back under the trees.  I manged to get back into a good position and drift the fly further into the corner.  As the fly passed along the side of the rock, the brother or sister of the first fish crushed the cahill and another strong fish was on the end of the line.  This one managed to tie itself around a dead branch that was wedged in the rocks on the bottom.  I tried to wade to the branch to see if I could free the fish but as I tried to work the line around the branch, the tippet snapped just below surgeons knot.  I could see that the tippet had taken a beating from the day's battles among the boulders.

As darkness fell, our large flies were being ignored.  From the gentle rises I was observing, it looked like the fish were taking spinners, so I traded the large fly for the small and the last fish of the day fell to a #18 sulfur spinner.
Posted by MarkW at 7:18 AM 12 comments:

Back on the Farmington again 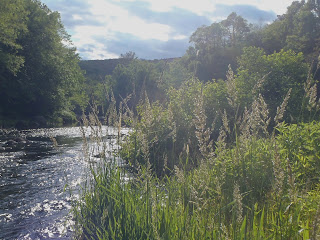 I can hardly believe it's almost a month and a half since I last fished the Farmington River but it's been a fun month or so fishing small streams close to home and far away.

I spent Friday afternoon up on the river enjoy another one of a string of warm, clear, dry, June days.  While this weather is wonderful to be outside in did I mention how dry it's been lately?  I checked out a couple small streams yesterday and ended up taking pictures of wildflowers since the streams were too low to fish.  Fortunately the Farmington flows have been decent throughout this dry spell but I am sure it's taking a toll on the reserves above the dam.

I spent the early part of the afternoon in the head of a nice pool nymphing the pocket water which is the type of water I really enjoy fishing.  I caught a couple of nice strong browns and then decided to throw some big dries and see what would come up.  I missed one on a long cast across the pocket water where getting a decent drift was a real challenge but I got a second chance a little later when some caddis were coming off and a nice brown in the same area came up and took the caddis. 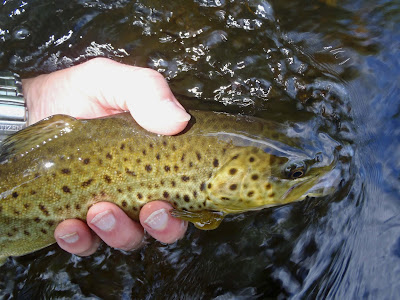 Later in the afternoon, I met Scot from Sportsman's Compass.  The highlight of the day was fishing during a glorious early evening and sunset.  The sweet rocket is starting to fade but I could still get hint of that sweet fragrance here and there throughout the evening.

The "hatch" was quite a mix of bugs; sulfurs of several sizes and coloration, large Cahills, olives, caddis,  and spinners at dark.  I fished some of the pockets at the head of the pool with my nymph rig and caught a nice pair of browns but for most of the evening we fished over strong browns and rainbows willing to take a host of dries.  One brown in particular came up a handful of times during the evening and I could tell it had some size from what I was hearing but I could not entice it to rise to any of the flies I tried.  I changed to darker, more orange sulfur comparadun and bang it took it and put a decent bend in my 4wt.   Fish took sulfur comparaduns (pale yellow and orange bodied), sulfur parachutes and even a small parachute Adams.

Sportman's Compass - check it out

It's been a busy few weeks getting ready for a graduation party for my youngest daughter who graduated high school last night.  My wife and I have been working hard getting the backyard ready for an open house so the fishing has taken a back seat lately!

If you haven't checked out Sportsman's Compass, you should.  It's a great new website of fisherman helping fisherman with destinations, guides, and gear reviews.  They asked me to write an article on fishing for brookies in the Shenandoah National Park.  The article is  about putting an affordable trip together called "Brown Bagging it for Shenandoah Brook Trout".  The links are provided so go check them out!

We will get back to fishing soon, I promise! 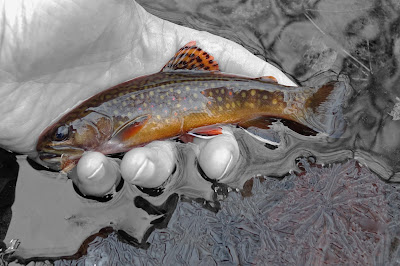