I can't say that's it been great fishing around CT lately.  Like a lot of places in the northeast, it has been hot, humid, and very dry. This is the first year that I can remember that fishing has been closed around feeder streams on the lower Farmington River as fish seek thermal refuge around the inlets.  I would recommend that anglers just stop fishing the lower river until consistent cool evenings bring the water temperature back down into a more healthy range for the fish.  The upper river while low, is still cool, so I have been out once before dawn and at sunset earlier this week.

There wasn't really much of anything going on in terms of tricos or the summer/winter caddis which the Farmington is famous for on my early in the morning excursion but I did find a few small wild browns willing to swipe at a small elk hair caddis and one rainbow that took the dropper on a dry dropper rig that I fished later in the morning.


Monday evening, my lovely wife came along with me.  I set up a couple chairs and we enjoyed dinner by the river together.  This
was the first time she had seen the river I fish so often and she enjoyed it, especially when a young bald eagle made an appearance.  When darkness eveloped the river wild brookies and browns were rising to spinners.  A usual cast into the darkness brought a few to hand.  Hopefully some cooler weather and rain will come our way soon.

Not much fishing around here lately with the high temps and low water so I am catching up on some of my fly tying.  Here's a video of me tying the frenchie, which is one of my top anchor flies when fishing a two fly rig.  I find this nymph to be a good choice early and late in the season.

It was another hot and humid day so I was up early and in the river at dawn.  I left the waders at home and wet waded! I was back to take another shot at fishing tiny flies to rising fish. There weren't as many rising fish this morning but I did find a little brook trout that wanted to play tag with a small ant a couple of consistent risers after the sun was up for a while.  This morning the fish got the best of me but at least I can say that I can tie and present a small chocolate CDC emerger well enough to entice a few fish but I am still having trouble hanging on!  I had two solid hookups and broke both off again but I'm not giving up just yet!
Posted by MarkW at 9:33 PM 12 comments:

One of the things that I love about fly fishing, is that there are always new challenges to overcome. I do most of my fishing in the afternoons and evening due to my work schedule and because I have less experience fishing in the mornings, I am not as acquainted with the bugs that hatch early.

Yesterday morning, I decided to fish the Farmington at dawn.  I love getting up early and getting outside so I was looking forward to some early morning fishing.  When I arrived, I was encouraged to see fish rising.  I did see some trico spinners in the water along the bank as I waded in, so I tied a spinner on but it was ignored.  Maybe the hatch is just starting and the fish aren't used to seeing them yet.  I switched to a small ant and on the next drift a beautiful wild brook trout nailed it.   I just love finding these wild fish in the Farmington.  Brook trout don't often pass up an opportunity to grab an ant, but the ant wasn't the solution. 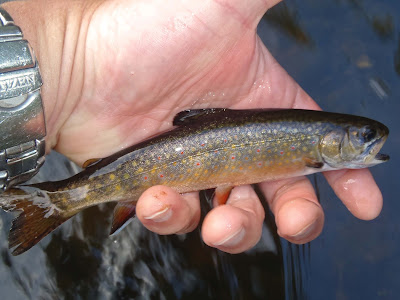 I waded a little further downriver and watched a nice pod of fish working something small on the surface.  I thought they might be taking Needhami, which is a very small, chocolate colored  mayfly that hatches on the Farmington River in the mornings.  I've never actually seen this hatch since I don't fish mornings, but I did have two in my box that I bought years ago and have never used.  They are about a size 24 so I needed to take my tippet from 5x down to 6x so that I could thread the eye of the hook.  I rarely fish below 5x, which actually surprises a lot of people who think you need to fish 6x to 8x tippets on this river.  I find fishing the heavier tippet just let's me get the fish in faster and with the right presentation, the tippet size isn't that important.

Since I fish heavier tippet, I knew that I would have to be more careful on setting the hook.  Well guess what...I actually got a fish to the take the tiny fly and I promptly blew the hook set and snapped the tippet.  Now I was down to the last fly.  I got another take and set the hook carefully this time and I could feel the weight of a solid fish.  From the tiny rises you would have thought that the rising fish were small.  Well this one wasn't, and it was smart too, heading straight for the shallow bottom where there was some woody debris.  It managed to get the line tangled in the brush, the tippet broke, taking the last fly with him.   It was fun trying to figure things out, a moral victory of sorts, but I'm going to need a lot more practice (and flies) fishing these tiny flies on light tippet! 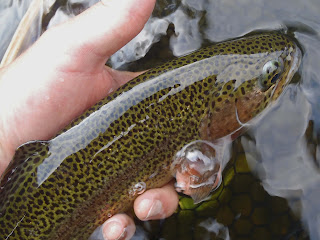 After losing the last fly, I strung up the nymphing rod and headed to some faster water.  I caught a brown and a rainbow on a small nymph before the heat and humidity got the best of me and I headed home to take care of some work around the house and watch the men's team archery event at the Olympics. Congratulations to the US men's team that took a silver medal against a near-perfect Korean team.

Where did the water go?

I woke early yesterday morning and noticed it was darker than usual. The sky was heavily overcast and low clouds filled the sky.  A few lighting flashes and some distant rumbling indicated a thunderstorm was headed our way.  I headed out for my run anyway, I actually like running in summer showers since it adds a little adventure to my morning routine.  Just when I was furthest from the house the rain started, gentle at first but growing stronger with each stride.  By the time I made it back home I was soaked but refreshed.  I thought the local showers the past two days would bring the water level up a bit in the river but when I checked the river gauge for the Farmington river, I was very surprised to see the flow out of the dam had been cut back to about 25% of the flow at the beginning of July.  Ben and I had made plans to fish after work, so I wasn't exactly sure what the fishing would be like later in the day. 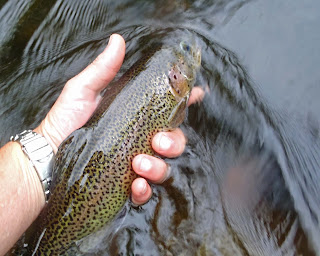 Ben had arrived before me and settled into a good location considering the conditions.  I was amazed at how low the river was.   I could now wade out to areas that I typically can not fish under normal flows.  I did hook one nice brown but it managed to snap off a worn tippet. With little to show for our efforts, we decided to move to some faster pocket water.  Ben did well with a dry dropper rig while I nymphed.  We both caught a mix of rainbows and browns before we decided to move again.

We spent the waning daylight fishing usuals to eager wild brookies and browns.  Nothing big but to a die hard small stream guy, it was definitely a lot of fun.  Too bad my camera battery died earlier in the evening.  These wild fish were  as strong as they were beautiful.  It's always nice to find small pockets of wild fish as it indicates a healthy river system.
Posted by MarkW at 4:41 PM 8 comments: