This past weekend my wife and I went down to south central PA to spend Parent's weekend with my youngest daughter who is attending Messiah College.  She was expecting to have a fair amount of work to do for school so I was told to bring my fishing gear as the famed Yellow Breeches runs right through campus.

Brad Bashore was gracious to provide a lot of information on the Yellow Breeches and some suggestions on where to fish, flies, etc.  He also suggested that I stop by the TCO fly shop in Boiling Springs.  Neil spent a good deal of time telling me about the area and what to expect.  He took a look at my fly boxes and then suggested a few local favorites.  I like having a few local flies from the places I visit.  If you are ever in central PA, this is a shop I would high recommend you stop by.  They are very knowledgeable and will give you an honest opinion of what you need to be successful and nothing more.

Boiling Springs is a very unique place.  There are several springs at the end of the lake that supply crystal clear cold water to the lake, "the run" and then eventually to the Yellow Breeches where "the run"dumps it's cold flow into the main stem.  I enjoyed a walk around this picturesque lake, marveling at the size of some massive sycamore trees that had me wondering how old they were.


I chose to focus during the afternoon on the main stem of the river below the run.  I didn't see any rising fish during the time I was on the river so I focused on nymphing and managed to entice a rainbow and a brown with one of the local nymphs that Neil had suggested.  Later in the afternoon I did venture up into the run but my long 10ft nymph rod was way too long to effectively fish the smaller run.  I would have been more at home with my 6ft fiberglass rod and some tiny nymphs.  I was amazed at how many fish were sitting in the shallow riffles of the run.   This is obviously a very productive stretch of water.  I did see a couple of pairs of fish looking like they were getting ready to spawn, one of which was a massive brook trout. 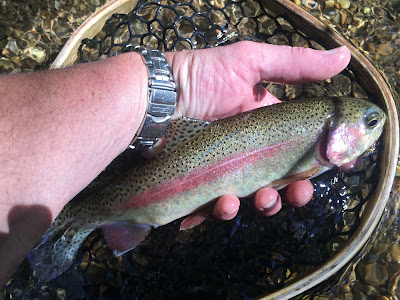 A special thanks to Brad Bashore and Neil Sunday for their help, suggestions and advice.  They definitely made my visit so enjoyable.
Posted by MarkW at 9:33 PM 19 comments:

A video I put together of pictures from hiking a fishing this summer in the Adirondack Park.  The music was written and produced by Rachel Lynn Wittman.  Check her out on Soundcloud.

I had been wanting to fish a favorite mountain brook all summer but the heat and dry weather had reduced it to barely a trickle for most of the summer but with hopeful optimism, I assembled my fiberglass rod, put a small fly box and some odds and ends in my pockets, slung my camera over my shoulder and headed up the trail along the ridge line of a deep valley.  I listened intently for the sound of running water but the forest was silent.  After a steep descent into the valley I realized just how dry this little stream had become.  Depressions that were once a couple feet deep and provided refuge to the brook trout were now mostly exposed. Knowing this brook pretty well, I could estimate that the water level was more than 2 feet below typical summer levels.  A couple small brook trout did attack my Royal Wulff but I just didn't want to fish the brook under these conditions so I hiked back up the valley and back to the car.

While the first stream was disappointingly low, I did have a plan B in mind.  Arriving at a second brook, I could see that the water was low but still cold and there were still pockets of deeper water for the fish to take refuge in.   Even though I brought along a small fly box, I really only need one fly for the couple hours I fished, a #16 foam ant.  Anywhere there was a little depth and some moving water there was usually a brook trout waiting to pounce on the ant.   It was so nice to fish a small stream once again after a very dry summer. 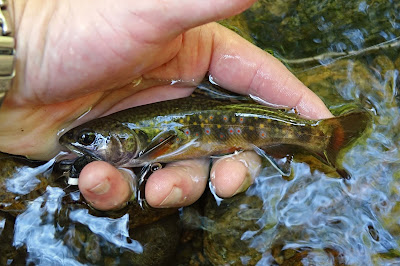 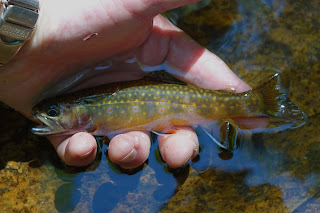 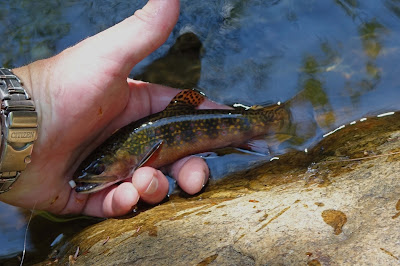 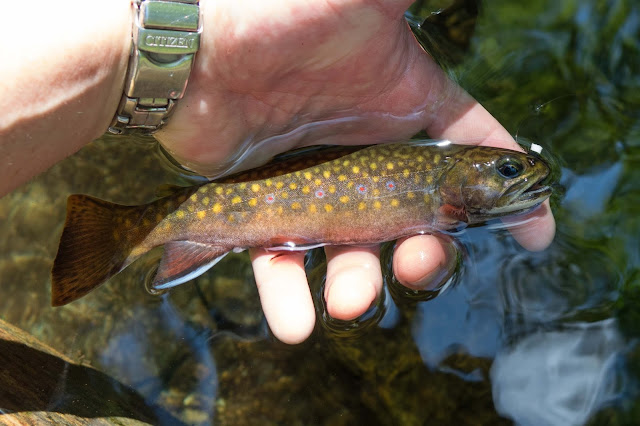 Some exploring in the Adirondacks

This past week, my wife and I took some time off to enjoy a quite week in the Adirondacks.  I was looking forward exploring a wilderness area that I haven't had the opportunity to spend much time in.

Early in the week, we headed up an unmarked trail into a gorge with a brook running through it.  I was curious if it held any brook trout.  As we drove into the area we spotted a large bull moose crossing the road.  He was across the road and through the underbrush and gone in just a few long strides.  The land speed of this massive creature was truly impressive.  Unfortunately, there wasn't enough time to grab the camera and get off a quick shot. He had quite a rack on him that I estimated at 6 ft across. On the hike it we saw lots of moose tracks in the softer ground.

As we hiked up into the gorge, I was  encouraged to see a good flow of water despite the generally dry conditions in the mountains.  Later in the week I visited a favorite mountain brook and was disappointed to see it too low to even fish. When we reached a nice looking plunge pool, I put my rod together and did a little prospecting with a Royal Wulff and a nymph dropper.  After a few drifts through the pool, the dry went under and I was soon holding a beautiful brook trout in my hands. Some smaller brook trout attacked the dry and the nymph before I packed up the rod knowing that the brook was promising lead for further future exploration.

Later in the week, we hiked up to a trout pond to have a look.  The dry conditions of this past summer had encouraged a good deal of weed growth in the more shallow parts of the pond but it was a pretty little pond that we enjoyed spending a little time resting by.