A tale of two streams

We've had some warm, clear November afternoons this week. Earlier in the week, I spent the day on the Farmington River.  I haven't fished the Farmington in quite awhile and I was curious how it was fishing after the long dry spell we had this summer and are still having into the fall.  I fished hard the whole day with little to show for it except one brown, but who's complaining when you are outside all day.  It was disappointing to see areas of the river drier than I have ever seen them.  Some of those areas held wild brown trout indicating that spawning areas were close by.  I just didn't have the heart to take any pictures.  The highlight of the day was watching a couple bald eagles flying along the river with a crystal clear blue sky above.


Alan and I made plans to meet this morning and fish a favorite small stream together.  Alan commented that it was been about 6 months since we fished together last!  We enjoyed some coffee and muffins and caught up in the warm morning sun.  I choose to fish a dry the entire day and hooked a bunch of wild brook trout bringing a couple to hand.  We commented throughout the day that this particular small stream was pretty healthy probably the result of a number of small springs and seeps in it's upper reaches that had keep the water cool and flowing through the drought.  We spotted lots of brook trout running for cover as we tried crept into position as well as hooked many young trout and a fewer healthy adults.   I fished a elk hair caddis and parachute adams most of the day. 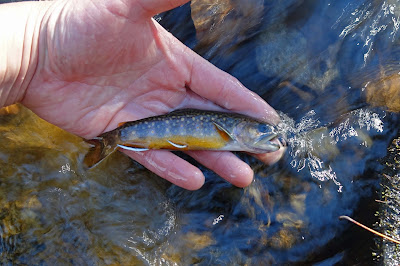 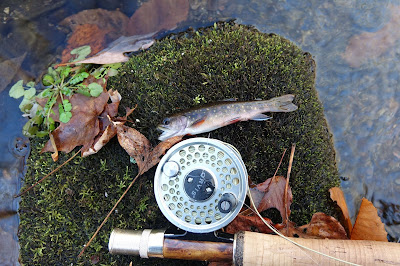