Awake, O wintry earth
Fling off your frozen sadness,
With sweetness, flowers bring mirth,
bright springtime's ancient gladness.
Once more, we sing the tale
through darkness sunlight spread,
To warm the winter's pale,
and tell that Death is dead 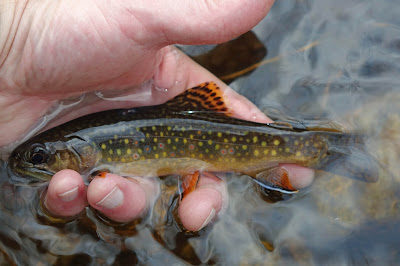 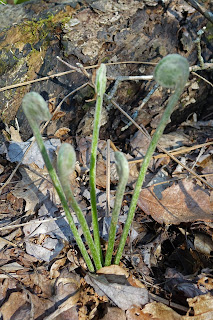 Bach's words seem to describe so well the new life that spring brings.  It seems like just a few weeks ago I was looking for the first trout lilies of the year and then all of sudden they were everywhere.  This week, my wife and I were walking and we saw the first wake robins of the year (red trillium).


After work on friday, I spent a couple hours along a small woodland stream.  The warm air had the bugs awakening from the long winter and the brook trout could be seen eagerly rising on several occasions in the tails of small pools along the stream.

A single dry fly was all that was needed to coax the local residents to the fly.  Now that the warmer weather is here the larger brook trout and taking an interest in the dry fly.  The forest floor was coming alive with wood anemone, dwarf ginseng, and fiddle head ferns and new life is beginning.

A spring morning in PA 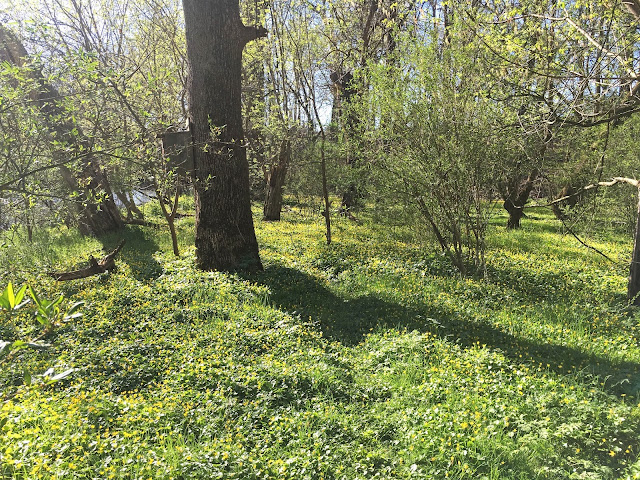 Greater celandine was everywhere as the early morning sun began to filter through the sycamore undergrowth that was just awakening with those early spring green buds in central PA.  We had a few hours to spare before we needed to get back in the car and start working our way to our next destination but what a beautiful few hours it was.  I choose a nice looking run and started to drift a pair of weighed nymphs through the chalky slightly off-color water.

On almost every drift, the point fly managed to spear a few empty caddis cases.  I took the hint and switched up the flies to a slightly heavier point fly to keep the flies moving more slowly along the bottom and a caddis larva as a dropper.  The caddis larva was surprisingly ignored except for some small fall fish and some stocky cubs but when I switched to a beaded pheasant tail soft hackle the trout were more interested.  I didn't catch any wild fish this morning but a handful of rainbows and browns made for a fun couple of hours. 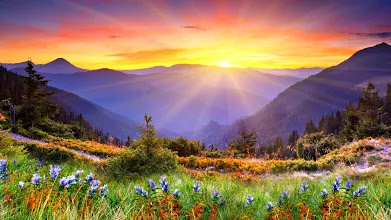 Lives again our glorious King
Where, O death, is now thy sting?
Once he died our souls to save
Where's thy victory, boasting grave?

Soar we now where Christ has led
Following our exalted Head.
Made like him, like him we rise
Ours the cross, the grave, the skies!

Wishing all of you and your loved ones a happy Easter Sunday !

Wishing all of you a blessed Good Friday 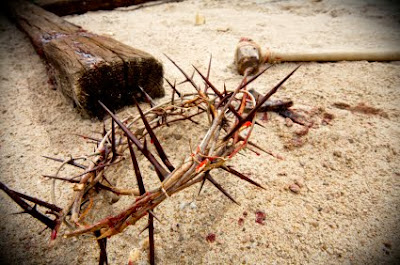 Lord, what moved Your heart to love lowly man
Before any star could herald Your praise?
Any why did You come, abasing Yourself
Veiled in a a robe of frail human clay?
Why would You, the pure, give Your life for the vile,
the innocent seeking the guilty to be reconciled?

I can't comprehend this fathomless love
I'm gripped and amazed at what You have done!
Why would the adored become the despised
to bear all the furious wrath that was mine?

How awesome this mystery of Your fathomless love for me!
From "This fathomless Love" by Steve and Vikki Cook

It was another stressful day at work, there have been many lately and I just needed to get outside and settle myself.  It was a warm afternoon and a welcome change from the cold, damp weather we've had lately.  After a quick stop home, I was on my way to to a small stream.

The air was warm and in the light of the setting sun, you could see a lot of bugs in the air.  I love this time of day when the shadows get longer and everything has a glow about it.  As I walked along the stream bank I was reminded that life goes on pretty much as it did yesterday, in disregard of anything that is going on at work or anywhere else for that matter.  Being outdoors reminds me to look at the bigger picture of things, things to be really thankful for, things that remain unchanged, things are always true regardless of how I might feel at the moment. 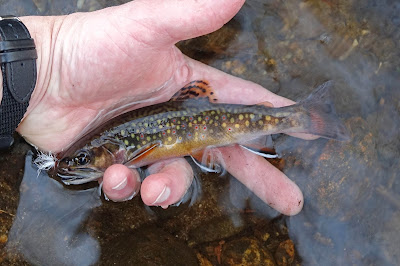 It wasn't long before I saw a brook trout rise in the tail of a small pool.  I fished to the setting of the sun with one single dry fly.  Back at the car, I removed what remained of the Royal Wulff, took a deep breath of fresh air, and gave thanks for wild places so close to home.

For the last few years, a couple of us have met to fish a small stream on the opening day of trout season in CT.  We choose to fish far from the crowds and the white bucket brigade for CT's native char.

This morning Alan and I met and Kirk joined us shortly after.  The day started with some hot coffee and a muffin and some catching up.  The morning was a cold raw one and I think there were a few snow flakes in the air at one point.

The woods still have a late winter look to them. The buds on the trees have not started to open and the forest floor is still covered in last fall's leaf litter.  The skunk cabbage however has just started to open, signaling that the wild flowers will start appearing soon. 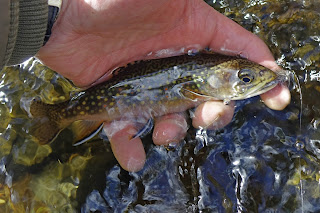 We've had a lot of rain lately here in southern New England which is a welcome change from the drought of last summer.  The stream we chose to fish was clear, lively and full.

I started with some smaller beaded soft hackles but I really didn't notice any interest.  I thought on a cold morning maybe something bigger and heavier would get some attention so I switched to an Ausable Ugly.  I was encouraged by a couple of taps in a run where the beaded soft hackles were untouched.


I ended up going to back to the few spots I had fished earlier with soft hackles and nymphs, and did much better with the heavier bushier fly.  I ended up sticking with that fly for most of the morning.


This particular brook had been hit hard by last summer's drought so it was great to see brook trout present in decent numbers and everywhere they should be. 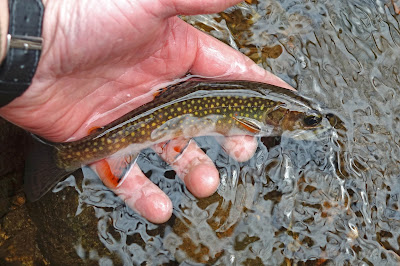 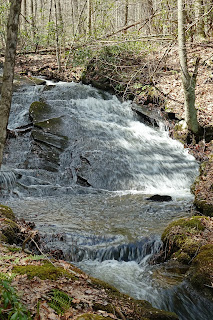 Around mid afternoon, I decided to switch to a big dry just to see if any fish would take it.  A pair of brook trout did take the Royal Wulff before I called it a day.  It was good to be back out fishing small streams again along with Kirk and Alan.

I had a little time this afternoon to relax so I decided to tie a few soft hackles.  Lately, it's felt like winter was trying to make a come back around here, I was thinking about spring and what better way to think about the warm days ahead then to tie a few Hendrickson soft hackles.

Here's another short video on a soft hackle that provided a memorable evening this past fall.  This small soft hackle was shown to me by my friend and neighbor Mike.  We were fishing during a decent olive hatch at the end of the beautiful fall day. As the evening approached and the temperature began to fall, fish started rising with regularity. I took a few fish on small dries but each of the fish took the dry at the end of the drift when it began to sink and swing. While I was fooling around with dries, Mike was putting on a clinic with this little wet fly.  After I switched over to this small wet we both were catching fish for the rest of the evening. I don't know how many fish we caught but this little fly was definitely what this fish were looking for that night including some hefty hold-over browns as you will see at the end of the video.