When you can't see it, swing it! 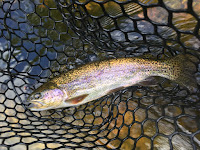 Things have been pretty quite here on the blog.  Usually by this time of year I've been up to the Adirondacks a few times but things have been busy at home this summer.  Last night my Ben and a friend of his were going up to the Farmington so we made plans to go together.  Ben wanted to introduce his friend to fishing dry flies for trout.


I did managed a couple of rainbows early in the afternoon nymphing some pocket water.  Late afternoon we started to see some rising fish.  I still have no idea what they were taking and after changing flies multiple times we ended up taking a few fish on Adams of various sizes.  When in doubt go with a general all round fly like the Adams!  Sonny got his first trout, a little wild brookie on a dry.  I think he's hooked on dry fly fishing for trout but there was more to come!


When things started to settle down, I had my doubts about the location were in so I decided to take a walk.  I found another spot where fish were working on what appeared to a light sulfur hatch.  I picked up one brown on a small sulfur wet fly and then switched to a smaller usual since the bugs were very pale almost white.  That's when things started getting interesting.  Fish started rising aggressively in little run on the other side of the river. I could reach them but getting a decent drift was challenging due to the varying speeds of several currents in between but when the drift was right a brown on rainbow usually took the fly.  Ben and his friend joined me and we fished to rising trout into the growing darkness.  I ended up switching to a #12 usual when I could not longer see the smaller one and took a few more browns and rainbows. When I could not longer see the big usual, I was just swinging it and still catching fish.

I was out earlier this week for a little fishing after work.  As I drove up to the Farmington River, I was working through a mental checklist of places to try becuase it's good to have a plan B and C on heavily fished rivers like the Farmington. Spot A was a bust, too many cars, so headed to the next spot on the list which had one other angler in it and there was plenty of water for us to explore.

There were a few sulfurs around early but the river was mostly devoid of rising fish, so I did some nymphing and picked up a couple of rainbows on a Walt's worm variation which has been a rainbow magnet for me lately.  After I saw the first couple rises, I headed back to the truck and put the nymphing rod away and rigged up the dry fly rod.

I toyed around with a sulfur comparadun but after drifting it over a few rises, I decided that I would go to "the usual".  I don't know why this rough looking fly does so well at dark but it rarely fails under these conditions and this night would be no different.  I tie two variations on short-shanked hooks in size 14 and 16.  I use either hot orange or pale yellow thread.  When the fly becomes wet, the body takes on the color of the thread due to the translucent nature of the snowshoe rabbit fur dubbing. With the pale sulfurs I was seeing, I chose the yellow thread variation. There weren't a lot of rising fish until the sun had set but once it did lots of fish were actively rising and I had the most consistent dry action of the season well into the darkness.

There was a brief lull that made be think the hatch was over but the rises started picking up again.  This time the usual, which had worked so well, was being ignored.  I tried a large sulfur spinner but that wasn't the ticket either. It wasn't until I turned on my headlamp to head out that I realized what was going on.  There were huge yellow mayflies (#10/#12) all over the river, either light Cahills or Yellow drakes.  I probably would have enjoyed the encore if I had switched to one of the big usuals I carry.  That's what is so fun about fly fishing, you are always learning to be more attentive to what's going on around you!

As much as I enjoy fishing dries at dark, those beaver tail slaps right behind me still give me the creeps!
Posted by MarkW at 4:39 PM 12 comments:

The past Friday afternoon Ben and I met up to fish the Farmington River.  We haven't had a chance to fish together this season so it was good to be able to ride up to the river together and talk about what has been going on with each other.  When we met, it was looking like it was going to be rainy start. On the ride up the rain was pretty steady but the forecast was calling for clearing by mid afternoon and I don't mind fishing in the rain for a little. 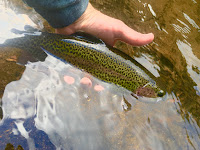 I ended up nymphing the pocket water looking for fish.  Things started off a little slow.  I found fish but I wasn't getting a good hook set for some reason but it was good to move fish.  I probably hooked a dozen fish but only landed a pair.  Some were just briefly hooked and others came off when I was trying to pull them out of the heavier current but that's part of fishing this type of water.  I enjoy searching out the seams, the aggressive way the fish take the flies in faster water, and the challenge of maneuvering the fish out of stronger current. 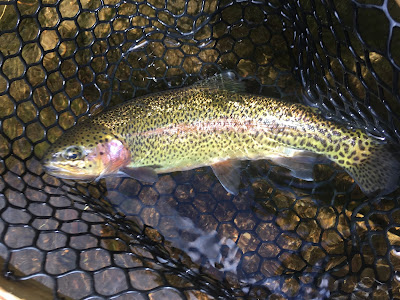 Late afternoon we tried another spot briefly before moving to where we wanted to fish til dark.  When we arrived I could see a couple fish taking something small in the surface film. The rises were very sporadic and the small olive dries I threw were pretty much ignored. Once the sulfurs started coming off things picked up a little.  I managed to pick off one brook trout on a small sulfur but the other rises were pretty much out of my reach until right before dark.  I put on a large usual and started fishing it in the the tail of the pool.  I could see subtle rises in about a foot or two of water and wondered if they were just small fish or salmon paar until one grabbed the usual and started running hard.  I was surprised at how strong this fish was running, taking line on several charges.  With one final leap, as if to say "see you later", it kindly returned the fly.  I think those subtle rises were decent fish taking spinners right before dark. With that last fish, we decided to call it quits while we could still make our way across the river and back to the truck.

Fishing in the dark is always a unique experience.  Whether it's jumping out of your skin when a beaver sneaks up behind you and slaps it's tail on the water a few feet behind you or stumbling upon a deer in the dark as you make you way out.  Unfortunately, we also had one more surprise on the way out when a set of red and blue lights started coming towards us.  A very polite officer stopped us and informed us that the area was closed at dark and that we had to leave the area before sunset.  I've fished this spot many times over the last few years and never had any issues with fishing late but I guess the local teens have been causing trouble in the area and the police were doing what they needed to.  The officer just gave us a warning but I we will have to find another spot were we can fish late.  It's too bad because I really would like another shot at the those fish in the shallow water with a large yellow spinner!
Posted by MarkW at 9:30 PM 6 comments: