I fish a good bit there’s no denying that fact but I do have other responsiblities and can’t fish whenever I like.  When I do have the time and opportunity, I tend to fish those spots that I know well for obvious reasons. The advantage of this strategy is that you get to know an area really well under a wide variety of conditions but there are also benefits to exploring less familiar areas.  This point was driven home by a blog post from  Domenick Swentosky over on Troutbitten entitled “Fifty Fly Fishing Tips: #3 — Fish New Waters” (I highly recommend  you check out his blog regularly).  Domenick writes “ there’s an alternate reason for fishing new waters too, one that’s a little more tangible. When we fish new water, we learn new things…New water forces us to use fresh tactics, to adapt, to think and solve the riddles of a trout stream”.  I thought Domenick made a decent point and I decided would make effort to explore areas I don't know all that well more often.  I had done really well the two previous nights in a spot I have fished many times before so I was content to spend a couple hours exploring some new places.  I would probably not catch a lot of fish but would atleast see some new territory that might pay dividends in the future.

I arrived in the middle of the afternoon on a Sunday in August and needless to say I was not alone.  People were out enjoying the sun whether swimming, floating down the river in an inner tube or canoeing or kayaking.  But that was all ok because my mission was to look and see the character of a new section of the river.  I traveled light with just my long nymph rod and a small box of nymphs as I was planning on covering a lot of ground.

I started at a strong rolling riffle that ran up against some big rocks along the opposite shore.  The current looked a bit too strong to hold fish so I nymphed the edges and found a little wild brook trout within the first dozen drifts.  I love seeing wild brook trout in the Farmington, as they signal that the river is in good health.  Usually, if I find one there are others around but I didn’t find any more close by so I decided to move on.  As I waded upriver there were many good looking areas and one really nice pocket water section that was really moving along.  When the flows are lower this would be a nice area to revisit but from the other side of the river next time! Along the way I found a decent brown, and hooked another when my anchor fly snagged a thick branch and the trout snatched the dropper as it was fluttering in the current.  I managed to land the branch (it fought like a tank) but the trout had long since freed itself in the struggle.  I was a but puzzled by this heavy pull with a little throbbing here and there that made we wonder if I had hooked the fish of a lifetime until I saw the log and the fish in the water!

Later in the afternoon I saw a couple fish take something off the surface so I walked back to the truck and rigged by dry fly rod.  I could not see anything on the water that would indicate what they rose to but they weren’t interested in a iso emerger.  As I retraced by my steps back to the truck I saw another fish rise in a shallow steady riffle.  I put on an elk hair caddis but I could get it to come up again.  As I was allow the fly to finish the drift a strong rainbow grabbed it from a shallow riffle and but up a nice fight and with that I called it a day.


I don’t know if I learned any new tactics but I did see some areas of the river that warrant some further investigation and found a few fish along the way!
Posted by MarkW at 6:36 AM 10 comments:

With the rest of my family treaveling, I had plans for fishing a lot this past weekend.  The forecast wasn’t too encouraging with heavy rain predicted for Friday through Saturday morning.  When Friday came I was watching the radar to make a call whether the hour drive to the Farmington was worth it or not.  The storms were following two parallel fronts running NE and from what I could tell, the river was going to be sitting in between so I went.  As they say, "the best time to fish is whenever you can".

The first couple hours were dry but the fishing was pretty dead.  At about 5:30, I headed to the spot I wanted to fish til last light. Fish were starting to rise.  I drifted a pair of nymphs through where I spotted a rising fish and connected briefly with a rainbow. A quick leap and it was free.  With more rising fish, I decided to switch rods so I headed back to the car to set up to fish dries and grabbed my raincoat. 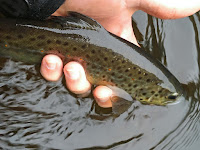 It wasn't long before the rain started and it continued the rest of the evening alternating between periods of light rain and more intense showers but the fish continued to rise regardless. A #20 olive parachute was all that was needed to take rising fish in the dreamlike fog the shrouded the river, the result of the combination of warm air, rain, and cold water at the water's surface.  As the light finally faded in darkness the river became quite again.

Saturday was a bright clear day, in stark contrast to the day before. I headed up about mid afternoon and decided to fish the same area as the night before.  While olives were on the menu in the rain, the clear day brought some small sulfurs out and I did pretty well early in the evening on #20 light comparaduns.  Around sunset the fish continued to rise but the the fish were no longer interested in the small light fly so I switched back to the olive parachute but it failed to attract any attention.  I did manage one on a Griffth’s gnat (#22) and picked up the last fish of the night on the olive parachute but I think the fish had started taking small spinners (22/24) but try to tie on of those one in fading light!

Two successive nights with different weather brought fish to the surface but each night was a different affair in terms what the fish were taking.  That’s what is so interesting about fly fishing, each new day brings different conditions that you have to figure out.  What worked the night before often doesn’t bring the same success.
Posted by MarkW at 8:07 AM 14 comments:

The sights and sounds of Sumner

The wildflowers are still blooming but those aren't the only sights to see these days. Yesterday afternoon I took a drive up to the Farmington to do some fishing and on the way up and came upon a bear crossing the road in the middle of the afternoon. Before I could grab my camera it was gone.  I was quite surprised to see a black bear in the middle of the afternoon close to the road and homes.  In addition to the usual beaver sightings and herons hanging around the river, I also watched as an osprey plunged into the river.  It was not rewarded for it's effort but it was interesting to watch close up.

I wanted to fish lower on the river to see if I could find some fish taking isos.  I found the bugs but only the cedar waxings and I noticed them.  The fish pretty much ignored them but it is always a pleasure to watch and listen to the wax wings in flight.  The first spot I fished I opted to nyphing the faster moving water with a weighted #12 iso nymph with a smaller dropper.  I hooked 3 trout but wasn't able to bring any to the net including one bruiser that crushed the iso nymph at the end of the drift when I let it swing.  I could tell it was a really nice fish but I didn't get a good look.  The river was a little off-color probably from some overnight rain so decided to head up river toward the dam to find some clearer water and less people floating down the river in inner-tubes. 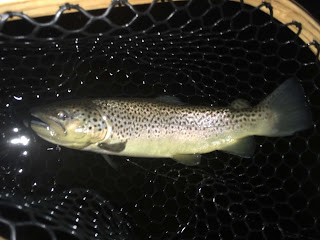 Every now and then you make a good call, and I was fortunate to find a location devoid of anglers with fish rising steadily into the evening. I fished small sulfur emergers, a #20 parachute Adams, small sulfur wets, and some smaller usuals.  Each accounted for a few fish a peice.  Included in the mix were some decent browns and one that managed to break off the 5X  with a strong deep run.

I don't exactly know what the fish were keying on as darkness enveloped the river but it looked as though there was a spinner fall.  As usual, the usual did a fine job of bringing up some nice browns in the dark.