A couple weeks ago we had the chance to spend a couple days up in the Adirondacks.  The mountains were starting to show signs of the approaching fall and despite the wet spring and summer this past fall has been reasonably dry in the mountains.

The mountains are especially quiet and beautiful in September which seems to heighten the sense of remoteness that one feels in the less traveled parts of the Adirondack Park.  The families that vacation in the mountains in the summer are back to their regular routines and those who like to observe the fall foliage are still planning their travels.  My wife and I enjoyed some fantastic weather for hiking and I fished a familiar small stream and did a little prospecting on a new stream.

I have always wondered whether a particular small stream held brook trout but finally got a chance check it out. The stream had a nice flow of tanin-stained water with some deeper runs and pools that looked very promising.  I found one deep, long pool with a nice flow of water at the head which probably would hold fish in the spring but on a clear September day the fish were likely tucked under a bank somewhere.  I didn't spend a long time exploring but after drifting the Royal Wulff through a couple of promising areas, I did confirm that the stream is worth exploring further.  It is always nice to see another stream where these native fish are still holding strong.

The next day, I fished a familiar stream and found fish willing to chase a foam ant, Royal Wulff, or Ausable Bomber.  The fly didn't really matter much.  The fish seemed to be hiding under the rocks along the banks.  Most of the brook trout that were willing to show themselves were of the smaller variety but I did see more than a  few dark shadows scurrying for cover in the low, clear water of early fall.  It was fun to watch the brook trout dart from under a rock or bank to intercept a fly working it's way along the current.

Even though our visit was brief I was so thankful to have the opportunity to enjoy the mountains at this wonderful time of year.  Our final day in the mountains we decided to hike early and enjoy the view below before heading home.

I have been out a couple times in the last few weeks taking advantage of the pre-fall like weather in both the Adirondacks and in southern New England.  This is one of my favorite times of year for both fishing and hiking.  So for a change of pace, I decided to head up to the Houstatonic river and see how it was fishing. I arrived late afternoon with hopes of casting dry flies large and small to rising fish.  It took a while to get going but fish started rising as the afternoon turned toward evening.  I did manage to observe one fish that was rising in the same general location so I settled in to figure out what this particular fish was feeding on.  After drifting the isonychia emerger several times right over where I had observed the rises, I downsized to small olive dries and wets and went down in tippet size to 6x but still failed to attract any interest.  At this point in the evening there were a good number of summer steno spinners hovering over the water.  This is a scenerio I had seen before so I switched to a #16 pale parachute and got a decent drift and the fish was on it!  It turned out to be a very healthy brown in excellent condition with all the fins intact, possibly a hold-over.  I stuck with the parachute but didn't see any more rises but I did have a fish slam the parachute as I was pulling it back in to make another cast.  It felt like a decent sized fish and it hit the fly so hard that it broke the fly off.

I rested for a while and observed, searching for other fish rising in the area.  Upstream a bit there was a father and daughter fishing over a group of steadily rising fish so I moved below them to watch and see if there were any fish that were outside of the area they were working, not wanting to crowd them.  Both he and his daughter had caught a few fish, and I think the young lady may have caught here first trout on a dry fly, judging from her Dad's excitement while she was bringing it to the net.  I just love seeing Dad's out with their children!  The rises had become more subtle which sometimes indicates that the fish are taking spinners so I switched to a #16 pale spinner and picked up a few more nice browns and a couple of rainbows.

The highlight of the evening was when I overheard the father say to his daughter, "one more fly change and I'm done".  He was clearly getting frustrated trying to figure out what the fish were sipping.  I asked him if he had any #16 pale spinners and offered him one if he didn't.  He said he had some spinners and within a few casts he had a beast of a brown on the line.  He was able to get it to net with the help of his daughter and it was a pleasure to watch them take a few pictures, release the fish, and then head back to there car satisfied to have had a nice evening on the river together.
Posted by MarkW at 7:15 AM 12 comments:

Thanks to the Farmington River Anglers Association 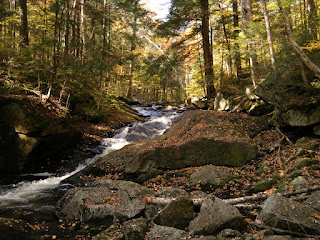 Just a quick thank you to the Farmington River Anglers Association and Grady Allen for the invitation to speak last night about the Adirondacks and it's brook trout.

It was great meeting some new folks and I enjoyed the good discussion that followed.  If you are interested in me speaking to your group you can reach out to me via email.

Thanks to the Hammonassett TU

Thanks to the Hammonassett TU and Jim Woodworth for arranging thnigs and hosting me last night. I enjoyed meeting and talking with everyone.  I will presenting next week at Farmington River Angler's Association in case you are in the area and weren't able to make last night's presentation.

Fly Fishermen's Guide to the Adirondacks 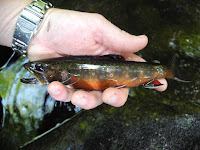 I will be presenting a "Fly Fishermen's Guide to the Adirondacks" twice in the coming month.  This presentation describes both the unique geology and history of the Adirondack mountains and how these have affected the brook trout of the region.  Information for accessing this unique fishery is also provided.

This past week it has definitely felt like the season is about to change.  The mornings have been cool enough to see your breath and after a good day of gentle rain I was thinking about fishing a small stream.  I figured the rain would have brought some more water into the small stream and so I decided to get up early and check a favorite out.  It definitely looked like fall as I drove along the meadows filled with ground fog and the grasses covered in dew.  These days the goldenrod and New England asters are everywhere, signalling the end of the summer and the changes that lie ahead.

The air temperature was 57 (F) and a quick check of the water temperature indicated it was about the same temperature.  The little brook was flowing nicely and very clear despite the previous day's steady rain.  I started off with larger flies but slowly worked down to a #16 Elk hair caddis, taking a queue from the tan caddis that I was occasionally observing as the sun began to warm things up.  Today there were many brief encounters as the fish were not that committed to taking anything but a handful of beautiful wild brook trout were brought to hand nevertheless.

After slowly working my way upstream, I turned around and saw another gentlemen quietly fishing behind me.  He didn't notice me, but when I said hello he quickly recognized me.  I was thinking about giving Alan a call to see if he wanted to fish this morning but decided that he must have plans on this Labor day so I didn't.  When I parked the truck I sort of expected to see his car, since I knew that the previous day's rain would have Alan thinking about a small stream also.  We took turns fishing our way upstream and observing all that was around us.  It was chance encounter but definitely made the morning all that much more enjoyable.  Today, most of the larger fish were sitting in the stronger riffles that ran along or under a bank and when a spot fitting that description was located there was usually a brook trout willing to at least take a swipe or two at a fly.