One of the many joys of small stream fishing is the fact that most fish in these small streams are wild fish.  While small headwater streams don’t hold large fish, the ability to observe the stunning beauty of these wild fish is the reason some of us are drawn to this endeavor.   This is especially true in the fall when the brook and brown trout begin to take on their characteristic pre-spawn coloration and the New England woodlands echos these changes with the distinctive yellows, oranges and reds of a hardwood forest in seasonal transition.

Recent rains were reminding me of the simple pleasure of small stream fishing in the fall and had me looking for an opportunity to get out again.  Visiting a favorite small stream, I was pleased to see that it was full and flowing at a level that reminded me more of spring than fall and I wondered if fishing a dry fly was the right choice.  Despite my doubts, I was content to fish a dry fly all morning long along the riffles and glides.  Several small yearling brook trout were interested in the elk hair caddis but nothing larger.

Approaching a stump along the stream's edge, I drifted the dry in a small seam just alongside the stump's edge and saw a nice brook trout rise to inspect the fly.  I generally don't see small stream brook trout refuse a fly, so I tried again trying to get more natural drift and again the fish rose, put's it's nose right under the fly, and then descended, disappearing once again into the cover that the stream bottom provided.  At this point I was convinced that a fly change was in order.  Looking through my box, I pulled out a small parachute Adams that I often fish in the fall and drifted it through the same seam.  The first drift failed to produce a response but the second brought the trout up from it's hiding spot and it took the Adams. After a brief battle, I was soon admiring the bright orange belly and dark throat of a gorgeous native brook trout. 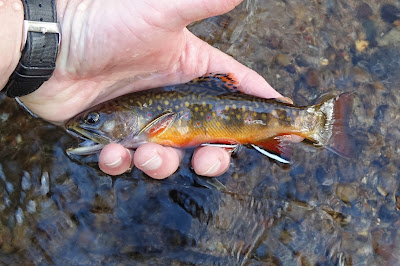 I continued to fish the Adams and found a few willing to take the dry fly, most however were willing to only take a swipe or two.  In the last run fished this particular morning, I also found a beautiful little wild brown.  I rarely find a wild brown as far upstream as I was, but it was a very fitting end to a fall morning out chasing wild trout and enjoying all the sights, sounds, and smells of a fall morning in New England. 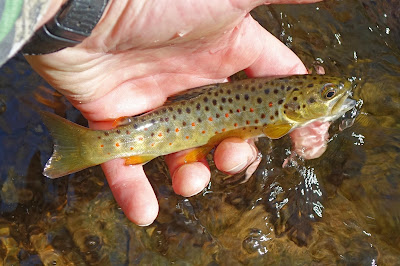 A couple mornings on the Yellow Breeches 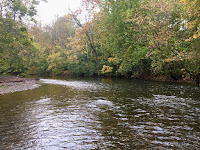 I was back in PA the end of last week and early this week and had the opportunity to spend a couple hours on two mornings on the Yellow Breeches.  Last week, the recent rains had brought the river up a touch and it was off-color but not muddy.  The morning I was out there was a light rain but nothing too heavy.  I started out nymphing a soft-hackled pheasant tail that had worked well a couple of weeks earlier when the river was low and clear.  This particular morning the PT was not attracting any fish, I suspect because of the lower clarity of the river.  I figure something with a bright hot spot might be a better choice so I switched to a frenchie of about the same size with a pink ice-dub collar and stuck with that the rest of the morning. 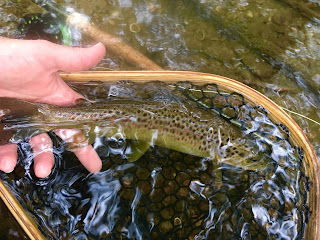 The first fish of the day was a gorgeous wild brown with beautiful golden belly and well defined red spots, red flair on the adipose fin and bright red rays in the tail, all indicative of a stream-born brown.  Unfortunately in my desire to keep the fish in the water, it managed to take off before I could get a picture.  I found another downstream but it slipped the hook right before the net.  While I stuck with the frenchie as the point fly of the two nymph rig I like to use, I did experiment with various droppers.  I was convinced that a caddis puppa in the right size and color would interest a fish or two but regardless of the dropper, all the fish took the frenchie.  The odd thing with the Breeches is that I can't remember ever catching anything on a dropper where at home in NE I catch almost half of the fish brought to the net on the smaller dropper.

For a couple hours the browns seemed to be the most active but I did catch a couple of colorful rainbows similar to those I found on the last trip.  In fact, I am certain that the first rainbow of the day was one I had caught back in mid-September.  It was sitting in the exactly where I found it previously, right up against a sycamore tree.

I was a little concerned whether I would be able to stay dry since I had left my rain jacket at home but the rain was fairly light and the gray overcast drizzly morning was delightful in the way the gray drizzly mornings often are.

Then this week, I explored another section of the Yellow Breeches.  The river was clearer than I was expecting.  The frenchie was not working in the greater water clarity so switched on a more natural caddis and zebra midge.  I did manage a couple of stocked browns and one beast of a fall fish.  There were sporadic rises all around me making me wonder how I would have done fishing a small olive dry fly. 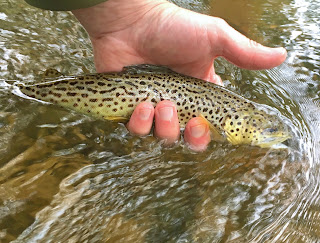 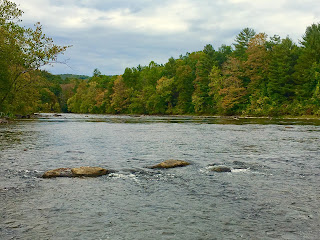 I spent a recent afternoon out enjoying the Indian summer weather we've been experiencing.  It's been a pretty dry fall so far and the rivers are low but remaining cool. With the lower water, I took the opportunity to explore some sections of the river that are normally not accessible to wading under normal conditions thinking that fish might have moved into runs with a decent flow and some depth.  Approaching the first promising run, it took about three drifts before the first brown was in the net.

As I was bring the fish to the net, I noticed that I was being watched.  Not wanted to be tangling with hungry heron, I quickly released the brown into some deeper water nearby and moved on.  I spent the rest of the afternoon picking my way among the boulder strewn stream bed with only a couple of taps to show for my efforts.  After working my way back, I decided to move to a run/pool that I haven't fished since last fall to see what the evening would bring.

Late in the afternoon, I noticed some subtle rises in the tail of a long riffle.  I had seen some olives appearing as the clouds began to dominate the sky.  After experimenting with the best position in which to get a decent drift among the conflicting currents, the #22 olive CDC emerger drew the first strike but I only managed to briefly hook the fish.  This pattern repeated itself twice more before the subtle dimpled rises ceased.  Then what I believe were little yellow quill spinners (Leucrocuta hebe) started appearing in number over the water surface and fish began rising again.  As I've seen before the fish were actually taking the spinners in the air rather than off the water's surface and it can be a very frustrating experience and this evening was no different.  I did managed to fool one brown with a small comparadun but that was it.  I tried every pale spinner, parachute and comparadun I had with me but nothing drew any interest. So I've spent the last couple days doing a little research to figure out what I was seeing and collecting some ideas to go back to the tying bench.

September on the Yellow Breeches

I was visiting my youngest at college a couple weeks ago and had a couple hours in the afternoon to fish a little bit along the Yellow Breeches.  Having fished mostly New England freestone streams it's always an interesting experience to fish a limestone stream in PA. While I grew up in PA and started fishing there as a young boy, I don't recall fishing any limestone streams as a boy.  My first limestone experience was last fall visiting my daughter in her first year at college.  One of the first things I noticed on the few limestone streams I've fished is the stream bottom which is mostly very fine gravel and what appears to be ground up shells.  The boulders and pocket water typical of a freestone stream are replaced with a gentle but steady current bank to bank with little pocket water to speak of.  Sometimes the fish will be holding in the gentlest of depressions in the bottom often in the gravel channels between weed growth.  With each visit, new observations are made and experience grows.

For whatever reason, the fish I catch in the Yellow Breeches take a bead head pheasant tail soft hackle even though this stream is loaded with caddis.  Last spring I was amazed at the number of caddis cases I was finding along the river bottom.  One particular spot where a nice current runs up along the roots of an old sycamore tree I've managed to find a fish or two each time I've fished this particular section.  This afternoon it seemed no one was home until I put the pheasant tail on point and used a zebra midge as the dropper and ran the flies a little closer to the roots.  I was pleased to find a pretty little wild brown.  I love finding these wild browns wherever I fish as they signal healthy rivers able sustain trout.  I was reasonably sure there was a large fish around those roots somewhere soI tried to put the flies as close tree as I could and I saw a nice rainbow take the pheasant tail inches from the where the tree met the water. 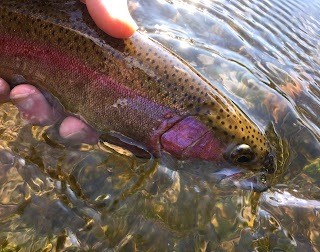 I messed around with various droppers over the course of a couple hours but it really didn't matter as all the fish took the pheasant tail.  Once I re-familiarized myself with paying closer attention to the smaller depressions I was able to bring to net a handful of nice rainbows.  One couldn't but notice how red their flanks had gotten and how dark these fish were across the back.  Have a look for yourself and feel free to comment if you think this is a strain of rainbows common to PA or whether these fish might be unique to the Yellow Breeches.  I will say that all the fish had well developed, rose colored fins that isn't typical of the stocked fish I usually see.