I was still hoping to catch a decent afternoon hatch so Ben and I made plans to head up to the river a few days after my previous attempt and try a little further upriver.

We arrived before things got started and I headed up into some riffles to do some nymphing.  I found a couple of pockets with a few of the recently stocked survivor strain browns.  They were easily identified being about 12 inches long with a bright green tag behind the right eye and a clipped adipose fin.

It wasn’t long before I started to see the egg laying spinners being blown downriver and then the duns started hatching.  A couple of guys were work the tail of the run so I opted to stay put and switched over to a dry fly rig.  There were a few rises out of the main current, but fish were willing to take a dun drifted through the riffles even if there were no rises evident for as long as the hatch lasted.  Even though the fish weren't big, I prefer fishing dries in pocket water vs slower water. 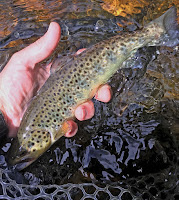 After the hatch wound down, I hiked to another stretch of the river and did a little more nymphing and landed another rainbow and a brown.  All the fish I caught nymphing took a bright green caddis puppa.  I never did find an effective second fly in my double nymph rig despite a good bit of switching around.

We finished up the day fishing the spinner fall that evening and both did quite well with a egg laying spinner first and then a rusty spinner later.  Early on I managed to find a pocket of wild browns of various sizes which is always nice to see. 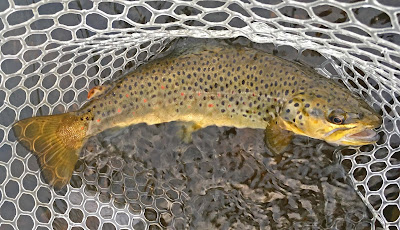 A few days later I was able to fish another spinner fall.  I caught a couple nymphing the early part of the evening and then had fun evening sharing the tail of a pool with 3 other guys.  Two of the guys I had met years before.  I usually run into them during the hendrickson hatch year after year in this same location, the third I had met during my last two trips.   Even though there were 4 of us fishing in a smaller area we all had rising fish to cast to and when the evening was done, one commented “that was very civilized!”  It’s always a pleasure to share the river with friendly, considerate people, which is generally the case even on a heavily fished river like the Farmington.

At this point, the hendrickson hatch is winding down and it’s time to dig in and get our home ready to sell and prepare for our relocation to the Boston area this fall.  Needless to say things will be quiet around here for a while so I wanted to take the opportunity to wish all of you a wonderful summer.
Posted by MarkW at 11:18 AM 12 comments:

Give them something different! - hendricksons Pt II

My second trip up to the Farmington was on a bright clear warm afternoon.  As I surveyed some spots working my way up the river I spotted some hendricksons coming off and an area where there were some rising fish and only a couple of fisherman.

The rises were mostly in the same spots but they occurring in water about 1-2 ft deep and the slower current made it difficult to get into position to cast without sending ripples.  The fish seemed to notice when they were being approached as the rises would stop and then start in another area. Every time I would move the rises would move back to where I had just been.  I did see a few fish take duns off the surface but when I looked carefully in the water, I couldn't believe what I was seeing.  There were a dozen or more dark nymphs drifting in every square foot of water as far as I could see.  After a couple hours of frustration, the hatch died off and things got quiet again.

I was beginning to question my sanity waiting for spinner fall with the wind blowing as hard as it was.  Almost ready to pack it in and count the day a loss, I saw a single solid rise right in front of me.  I tried several hendrickson dries (comparadun and spinners) with no response and then I remembered a friend's advice - "when all else fails throw them something different".  I looked in my box and the craziest thing I had with me was an Ausable Bomber.  Wouldn't you know it, on the first drift a solid brown came up and nailed the Bomber.  I couldn't believe it! While I was working on bringing it to the net I wondered if I had foul hooked it but it had inhaled the bomber like it was the last meal it would ever see.  After seeing another lone rise further upstream, I cast the bomber, mostly out of curiosity, and sure enough the fish came up but I missed setting the hook.

Who knows what the fish saw in the Bomber but by this time the wind had settled and the spinners were in the air.  I started off with a size 12 but then switched to a size 14 rusty spinner and picked up a nice holdover brown.  It was one of the survivor strain browns that are removed from the river as a large adult, taken back to the hatchery to breed, and returned to the river.  From the red marking behind the left eye this one was released back into the river as an adult in 2017.  It's always encouraging to see fish holding over well in the river.  As darkness approached the fish were still rising but they were ignoring the #14 spinner.  I suspect they were taking something smaller.

It was a frustrating day to start but redemption came in the last hour.
Posted by MarkW at 7:47 AM 8 comments:

The Hendrickson hatch has finally made it to the Farmington River and last Sunday afternoon was my first chance to get up to river.  It was a rainy, damp day, the sort of day that you don't usually see Hendricksons.  I fished for a while in an faster run that dumps into a long deep pool.  I thought I could nymph the faster water and if a hatch occurred, there might be rising fish in the pool below.

The faster water produced a brown and a pair rainbows.   After spending a winter and spring chasing small wild brook trout, I had forgotten how strong the fish in the Farmington are and the first brown of the afternoon quickly reminded me. 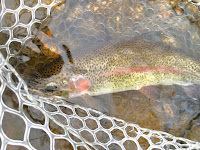 The highlight of the afternoon was an epic baetis hatch.  It wasn't the hatch I had gone looking for but typical of a grey, rainy spring day.  While the fish were largely ignoring the bugs, the swallows were all over them.  I just sat back and watched.  There were so many birds in the air at the same time, that I wondered how they didn't run into each other.  I didn't dare cast a fly into the swirling, darting mass of birds for fear of injuring one.  If you've ever watched the areobatic flight of swallows then you can imagine what it must have looked like!

I finished up the afternoon checking out one more spot and picked up the last strong rainbow of the afternoon.  In a future post on two, I'll have more to say about the Hendricksons.

I’ve been interested in experimenting with long exposure photography for some time.  After doing a little research to get familiar with filters and settings, I figured that I would need a neutral density filter and a 10stop filter seemed a good place to start for what I was interested in doing.

The first opportunity that I had was an overcast afternoon, so I chose a small stream that I’ve been fishing with a nice waterfall.  The brook trout were active and many were hooked on a bead head pheasant tail that I had dropped off a royal wulff dry.  A few fish took the dry but the strongest fish hit the pheasant tail hard and then ran for the roots and undercuts and were able throw the hook.  The late spring snow storms have left a lot of debris in and around this small stream making it difficult to get a fly to where the fish were and even more challenging bringing a feisty brook trout back out!
I spent the last half hour experimenting with the camera and the filter.  Other than the out of focus twig on the right side, I was pleased to get the effect on the water that I was looking for.  The 10stop filter was a but much for the overcast day but it should work nicely in situations with more light or longer exposures.  This first study gave me a little better understanding of the variables I will need to control when using the filter.