Last week I had the chance to spend a few days in the Adirondacks.  With temperatures reaching into the upper 90’s in most New England, the Adirondack Mountains did not escape the heat wave as they often do.  The heat coupled with dry summer conditions meant that most of the brooks I usually fish were too low and potentially too warm to fish but there is one that usually remains cold through the dry summer months.

I was up before dawn to take advantage of the cooler morning air.  The cool night air had brought a heavy dew on the white compagnon, daisies, and chicory growing along the roadsides this time of year.   When I reached the brook, I could hear the gently tumbling water but the stream was low.  A quick check of the water temperature, indicated it was in a safe range to fish.  I fished a black foam ant in the heads of the small plunges and caught a few smaller brook trout.  Switching to a larger tan caddis seemed to bring a few larger fish to the surface. 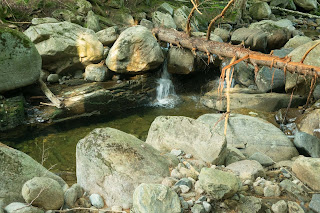 As I picked my way downstream along the boulder strewn brook, I approached a favorite shelf of exposed Canadian Shield.  Along the shelf there is a break in the rock that forms an underwater ledge with some current running along it.  I often find fish hanging close to the ledge.  As the caddis floated along the ledge, I watched a nice brook trout rise, inspect the fly and turn away.  Most brook trout that I run across in these relatively sterile Adirondack streams don’t typically refuse a well presented fly so this was a bit puzzling.  I waited a bit and then tried again, this time with no response.  Switching to a foam ant, and then lighter colored usual, also failed to interest the trout.  Reasoning that the fish had inspected a tan colored fly, I tied on an Ausuable Bomber and floated it along the ledge.  This time it rose and took the fly but the barbless hook didn’t hold and the brook trout headed back to the safety of the ledge.  Not wanting to give up on nice fish, I waited some more and tried the bomber once again and was surprised that it rose once again.  This time the hook held and I was soon holding a lightly colored Adirondack brook trout.  You can see the exposed Canadian Shield in the background.  I find the fish in this particular stream are generally lighter in color, this may be due to lack of tannin in the water (often found in the Adirondacks) and the lighter stream bed formed by this rock. 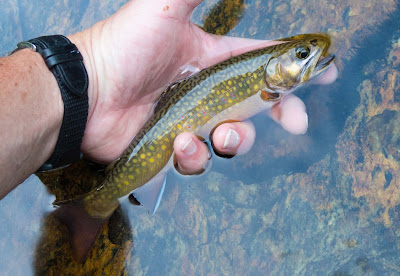 I continued to fish until the morning air started to bear the heat of the coming day and then quit.  I would have like to fish more while we in the mountains but the temperature and the dry conditions didn’t allow that but I was thankful for one morning to fish in the mountains we love.

Last week my friend Pete (TROUT1) passed away after a long bout with cancer.  I had a chance to visit with him before he passed and we laughed about the adventures we had together over the years.  Despite everything he was going through he always managed to have a positive attitude which is something I will always remember.

I first met Pete after an email exchange during which he graciously offered to show me around a local stream that he had fished for years.  That first meeting turned into a friendship that took us fishing small streams and larger rivers all over Pete’s home state of CT.  Having spent his entire life in the same general area, he was wealth of information that he was gracious enough to freely share.  I would have never started fishing the Farmington River without his encouragement and guidance and it was Pete that introduced me to tight line nymphing.

Pete was an well rounded fly fisherman who was at home fishing dries, nymphing, or swinging streamers but he was a master of fishing wet flies. At Christmas time or his birthday I would tie him some of his favorite bead head pheasant tail soft hackles and he would proceed to catch more fish on the flies that I tied for him than I ever could. A fact that he would remind me of frequently.

I will miss you friend!