Taking a break for a little fishing 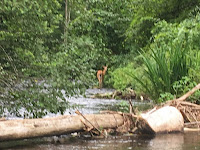 We are getting close to having our home ready for sale so I did manage to take a couple short breaks from work this last week.  It’s been a few months since I last fished the Farmington so I’ve been a little out of touch with what’s going on up there but it’s icy waters were a welcome change from all the heat and humidity around home.

The first evening, I was joined by a young deer who wasn’t all that concerned with me.  By the time I had my camera ready, she was a ways off.  I started the early evening off nypmhing my favorite pheasant tail and caddis puppa combination with no interest.  I had noticed a few isonychia, so I switched over to a dry dropper combination (a larger parachute adams with a #20 rainbow warrior).  I don’t know why I selected the rainbow warrior but on the first drift a brown took the small nymph but quickly shook the hook. 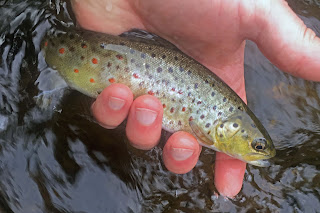 Taking the clue, I tried a couple of small nypmhs on my tight line rig and found a half dozen willing to take the small warrior but like the first fish, all but one wild brown managed to toss the hook.  I did miss another wild brown on the parachute adams and landed one nice wild brook trout on that same dry later in the evening before I headed home. It’s always nice to find some wild fish on the river and it was a pleasant few hours to be outside breathing something other than fresh paint.

After missing quite a few fish on the previous outing, I was looking for some redemption.  A few days later, there was another break in the work and I decided to try again.  There were a good number of fisherman out and even my generally overlooked spot had a pair of fisherman that most likely had worked through the water I was hoping to fish and another gentlemen in a run below that.  Still, I thought I could find a couple fish and took up the challenge of fishing behind another pair of fisherman.  Recent rains had the river up and a little off color so I tried a small frechie along with the rainbow warrior.  Both flies connected with fish this particular afternoon and I only dropped one.  I was pretty pleased to have landed a couple solid browns, a couple of smaller wild browns and a small brookie all while fishing previously worked water.

Later in the evening I headed upriver to see if the small sulfurs were still coming off.  As the sun set the sulfurs came off in good numbers but few fish were noticing.  I did find a group of wild brook trout that were taking the small bugs along the banks under the cover of some limbs brought down my active beavers.  A small usual connected with the three I saw rising before things got quiet at dusk.

Hope you all have been getting some fishing in this summer!  Tight lines!

The wisdom of Pete

I am re-posting a short piece that my late friend Pete sent me a while back.  Pete was master at fishing a fly we jokingly referred to as "Pete's Fancy".  I don't know how many of them I tied for him but he could catch fish in any stream at any time of the year with a simple bead head pheasant tail nymph with a couple turns of partridge hackle behind the bead.  I hope you find it as informative as it was therapeutic for me to read again the words of a good friend.


"I was asked to write a guest post by Mark, who dubbed me the Zen Master of the Pheasant Tail. While I don’t know if I am quite the Zen Master, I can tell you that the Soft Hackle Pheasant Tail has become one of my “go to” flies, and I have caught many, many trout using this fly.

I first started fishing soft hackles flies after reading Sylvester Nemes book on soft hackles in the mid 1970's. Initially I preferred to fish the Partridge and Peacock soft hackle on some of the smaller local streams.

About four to five years ago while fishing the Upper Connecticut River, in New Hampshire, I came across the Soft Hackled Pheasant Tail in a fly shop and purchased a few of them. When I returned home, I started to fish them with some success on the larger rivers in the state of CT, the Housatonic River and Farmington River.  I think that the Pheasant Tail represents a myriad of different insects to the trout and this is what makes it so deadly.

I prefer to fish the Soft Hackle Pheasant Tail in size 14-18, with and without the bead head, depending on the time of year, depth of the water, and what is hatching. Early in the season I fish size 14 with a bead head to get down to where the fish are. As the season progresses I just adjust to the conditions on the water I am fishing. I use a 9 to 12 foot leader in 4x or 5x, once again depending on conditions of the river I am fishing.

Generally I use the Soft Hackle Pheasant Tail as a searching pattern if nothing is hatching. I cast the fly quartering across and upstream, letting the fly just swing in the current, and as the fly gets to the end of the drift with no takes, I slowly retrieve the fly, using short 4-6 inch strips, or twitch the fly. Working the fly like this has proven to be deadly for me and when the trout takes  this fly they hammer it. There is no doubt when they take the fly. Another favorite trick of mine is to target trout that are sipping something under the surface. I try to work into a position above the fish and cast the fly a few feet above their feeding lane. Let the fly dead drift and often this results in a hook up. Another tactic is to blind cast up and across, letting the fly dead drift like a dry, make a mend or two, watching your leader. When the leader stops, set the hook and most of the time you are into a fish.

There are times when the trout will take the soft hackle, as it starts to rise up through the water column, at the end of the swing. Usually these takes are really solid and leave no doubt that you have a fish on. Just another reason I only use 4x and 5x leaders. I fish the Soft Hackle Pheasant Tail in all types of water, slow, fast, moderate and pocket water.

I have taken trout in every river that I have fished the Soft Hackle Peasant Tail, including small wild trout streams during December and January. It has been my “go to” fly particularly in the Farmington River. Mark and I have fished with several other fishermen from a forum that we all belong to and each one of these fine fly fishermen can attest to effectiveness of the venerable Soft Hackle Pheasant Tail."

Here's a video if you are interested in tying a few!