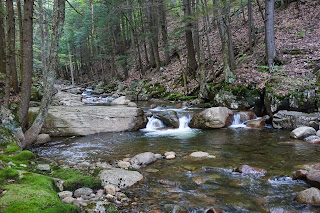 When I think about Spring in the Adirondacks, I think of two things only one of which is a pleasant thought; brook trout and black flies.

The trout season is now open in the mountains and it was good to be out on a turbulent high gradient mountain stream again.  I missed fishing these waters since my last venture in the fall.  With the move and all that is new in our lives, it was good to be in a familiar, wild place again; the sound of tumbling singing once again to my soul.


I was up very early to fish the first few hours of daylight for one primary reason, to avoid the black flies.  In the open areas of the forest the bluets were out in force with the occasional white trillium.

Fishing so early in the morning with the high waters of spring meant the dry fly wasn't going to be that productive but I still tried for a little before I resorted to the Ausable Ugly.  The version with a orange hot spot found a few willing takers in the early hours.

By the time the sun's rays were filtering through the forest, I was off the stream and on my way home thanking for a couple hours of peace and quite that were relatively bug free. 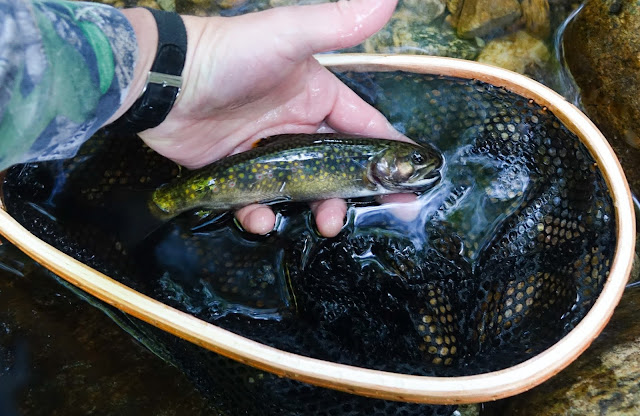 I am a Pennsylvanian, born and raised where trout fishing was king.  As I kid, we would occasionally visit the shore but never fish there.  Since moving to MA, everyone around here talks about fishing for Striped bass.  Not know a thing about fishing tidal water, I was hoping to tag along with a friend who could help me get started.  When my old neighbor from CT called and asked if I would like to join him on Cape Cod to fish for Stripers, I said WHEN! 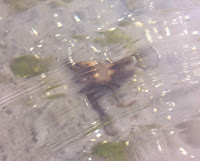 Mike is also from Pennsylvania, so after a fair bit of ribbing about the sacrilege of fishing anything but sweet water, we made plans to meet up early in the morning later that week.  My wife thought I had really lost my marbles when I told her that I was getting up at 3 am to go fishing.  Mike was gracious enough to provide some flies and he thought I could get by with my 5/6 Spey rod. 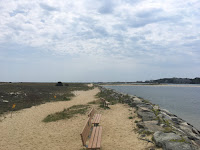 We met on Cape Cod at 5:30 in the morning.  Mike made some calls to other guys he knew that were fishing in the area and he picked the spot to fish the incoming tide.  We were fishing an estuary that was about 1/2 mile from the Atlantic Ocean.  I was amazed at all the wildlife around us.  I watched a small crab making his way along the bottom and later a pair of horseshoe crabs that were cruising along the bottom.  There was lots of bird life as well.

Mike's son Dave was the first to hook up followed by Mike and before long I had my first striper on the fly.   We had pretty steady action on schoolies until the tide turned.

We stopped for a bit and had some breakfast and checked out another location but the wind was blowing too hard directly into our faces so we re-grouped and headed back to our first location.


Mike reached out to another friend who was fishing on the other side of the inlet from us.  Phil said they were doing pretty well so we headed over and did really well on the incoming tide.

Phil caught the best fish of the day while we were there.  We all caught a handful which included my best fish of the day that I caught on the 7wt single hander.  This fish was a bit stronger then the others and ran hard after being hook and peeled line of the reel, making me wonder if I had brought a knife to a gun fight.  I eventually gained the upper hand.

I had a blast! and learned a lot from those who were fishing with us.  A special thanks to Mike and his friends for introducing me to Stripah fishing.

A couple of quiet morning hours were spent on the Yellow Breeches in south central PA enjoying wild things.

The intoxicating fragrance of Dame's rocket filled the moist air and the flower fleabane and honeysuckle added some color to the light green of the spring woodlands. 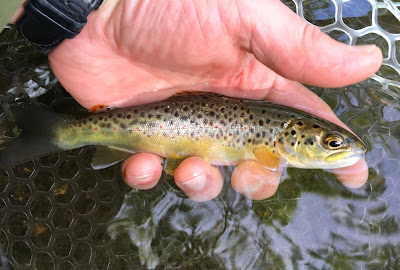 A few wild browns and rainbows were brought to the net along with their stocked relatives using a small pheasant tail and zebra midge, the trout approving of both equally.  All these things working to refresh the mind. 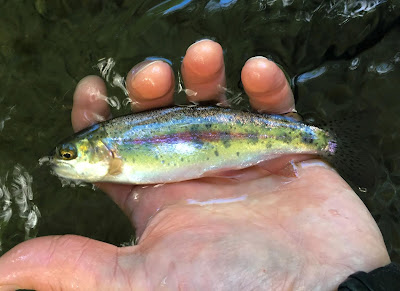 Searching for brook trout in MA

My first thought early in the morning was to head back to CT and fish a favorite small stream that would likely not be effected by the rain we had the night before.  However, rather than running back to the familiar, I decided it was time to start exploring some streams closer to our new home in MA

With some helpful suggestions from Will (Hibernation) I decided on a spot and headed out to check it out.  There were two streams close together, so I decided to explore a little bit of both.

The first stream was a bit disappointing, feeling more like a boggy swamp then the high gradient small streams I am accustomed to fishing.  Skunk cabbage and marsh marigold were everywhere as were clouds of small biting gnats.  After hiking up it a bit, the bugs eventually got the upper hand and I decided to move on and explore the other branch. 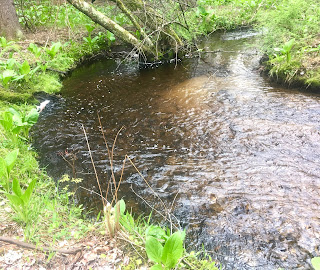 In some ways the second stream wasn't a lot different, very tannin stained but there was a lot more gravel to the stream bed and there were a fair number of riffles and runs which was encouraging.

The very first run I came to is pictured to the left.  As I drifted the Ausable Bomber with a bead head gold hare's ear dropper behind it, a brook trout slammed the dry a foot off the left bank.  After a spirited battle, I was holding a 7-8" wild brook trout in my hand.  Unfortunately, it was off and on it's way while I was fumbling with my camera.  Encouraged that this second stream held brook trout, I carefully explored a small section and found several decent sized brook trout willing to take the Bomber off the surface.   Despite the disappointing start, the day ended well with me finding brook trout in my new home state. 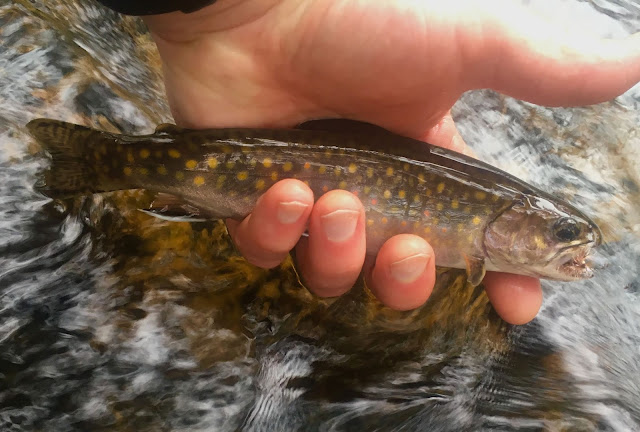 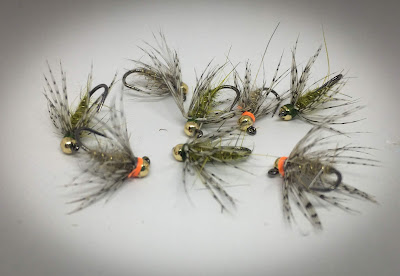 Here are a natural and olive gold bead hare's ear nymphs that have been working well lately.