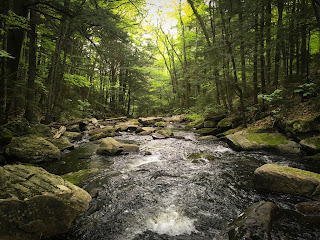 One of the things I love most about the Adirondacks is the wildness of the mountains. Even a short hike can bring you to some spectacular landscapes that have a very remote feeling to them.   Spring seems to heighten that sense when the rains have brought new life to the forest and the brooks are wildly tumbling down the mountains filling the gorges with their thunder.

This particular morning I met John and his friend Brad.  John recognized some of the areas I've fished from the pictures I've shared here and that began an email conversation that eventually led our meeting since we were both in the area.

I had a hunch that a brook that I've fished a lot in years past, might be worth exploring with the wet fall and spring we've had in 2018 and 2019.  The previous years of drought were not kind to this brook or it's brook trout and I was curious if the recent turn in the weather had brought new life.

We met shortly after sun up and took a hike up the valley and dropped into the gorge.  Our first bushwhack turned out to be a miscalculation on my part and put us further downstream than I had planned.  We fished that stretch for a bit and then hiked back up, and headed further up the mountain to some plunge pools that I wanted to show John.  It takes some time and effort to seek out places like the one below but the effort is well worth it.


From our brief survey, I was pleased to see that the brook trout population is rebounding.  Finding trout ranging in size from young of the year to a healthy size was encouraging.  In year's past, this stream has produced some of the largest and most colorful wild brook trout I've run across in the Adirondacks and I am hopeful that we will see a return. 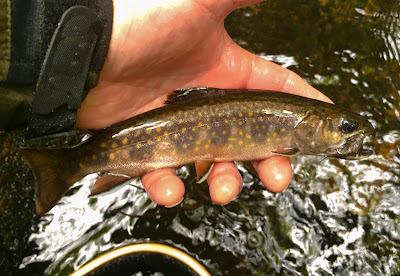