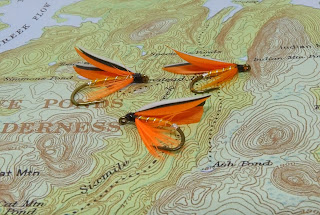 Among the color plates in Ray Bergman's Trout are a number of married wing wet flies.  These are made by "marrying" multiple slips of dyed duck or turkey quill feather together.  I prefer to use duck quill because I am tying on smaller hooks (#8-12).  The individual feather fibers have micro barbs that allow them to adhere to one another if they are placed carefully together.

One of the most striking married wing patterns are variations of the brook trout "fin" such as tthe Fontinalis Fin.  The wing uses orange, black, and white fibers to produce a wing that resembles a brook trout fin.  The legend goes that you could catch a brook trout with a fin on a hook.  The variation you see here has no tail, uses an orange floss body, fine silver oval tinsel tag and ribbing and soft orange saddle hackle for the throat.  The combination is quite stunning. 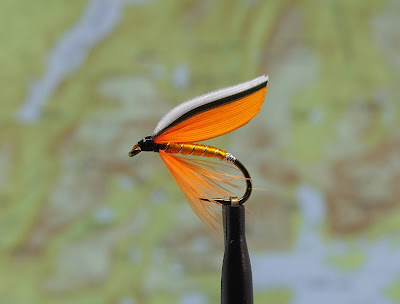 Has anyone caught a brook trout on a "fin" fly?  I hope everyone is doing well during this time we when we are spending more time at home!
Posted by MarkW at 7:18 AM