Friday afternoon on the Farmington 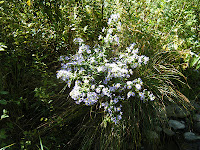 I did not want to spend this sunny, pleasant, pre-fall friday afternoon inside, so I took a some vacation time and headed up to the Farmington River.  I had planned to fish a handful of places.  A couple were new to me so I did a fair amount of walking and exploring and but I did manage to find good water in each spot.  I started out with a stimulator and a pheasant tail soft hackle trailed off the back.  A nice 17# hold-over brown started the day off taking the stimulator followed by a clown of a wild brown that took the pheasant tail in the tail of some riffles and proceed to launch himself into the air several times and then tried to tie me up by running around me several times. 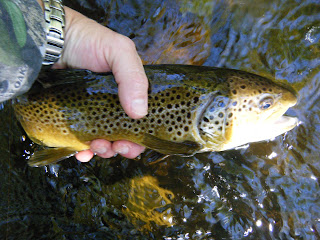 The second location produced a yearling survivor brown with a chartreuse elastomer in the right eye that pounced on an iso comparadun in faster water.

In the final location I managed to land a nice rainbow again on the iso comparadun as well as breaking one off in faster water.  I finished up Euro nymphing some of the deeper spots and managed one final rainbow on Rich Strolis DDT nymph that was tied on as the dropper. 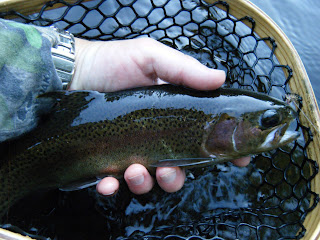 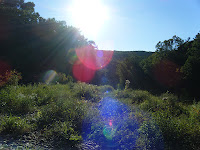 Headed out yesterday afternoon to enjoy the fall like weather here in CT.  The afternoon was bright, clear and a cool 68.  The low water levels reduced this section of river to a very flat pool with little in the way of moving current. I did manage a 17" brown that looked like it had tangled with a bird at some point.  I hooked and dropped another smaller fish on an isonychia along the bank.  Nice to get out and enjoy some fresh, cool, air. 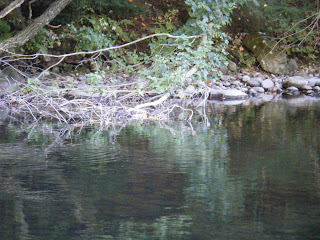 Brush along the bank providing shelter 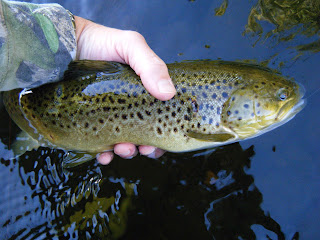 Fall is definitely in the air and along with it the gin clear, low flows of late summer in the Adirondacks.  Fortunately, the cool nights have kept stream temperatures down and the brook trout have sought out the deeper lies for refuge.  Last night I checked on a small stream that I haven't visited yet this season.  After a quick check of the temp (64F), I hiked to a pair of spots that held fish last season.  As daylight faded into the soft light of a full moon, I found a few brook trout willing to chase a tan caddis in the dark.  It was nice to know that the brook trout population in this little gem was still hanging on. 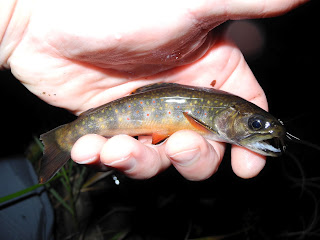 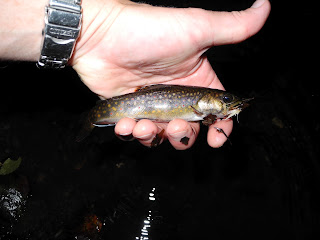