Yesterday was a gorgeous pre-fall day here in CT.  Unfortunately, these blue bird days are not necessarily the best for fishing.  Yesterday afternoon was surprisingly dead at several locations that I fished.  Even the iso and the stimulator/bead head pheasant tail rig were being ignored.  However the day was saved in the last hour of daylight as fish sporadically took small olives and then rusty spinners at dark.  I took one on an olive snowshoe emerger (#20) and three on a rusty spinner (#20 ) in the fading light before all went dark.  The gentlemen next to me asked what I was using so I gave him one of my rusty spinners and he took two himself. 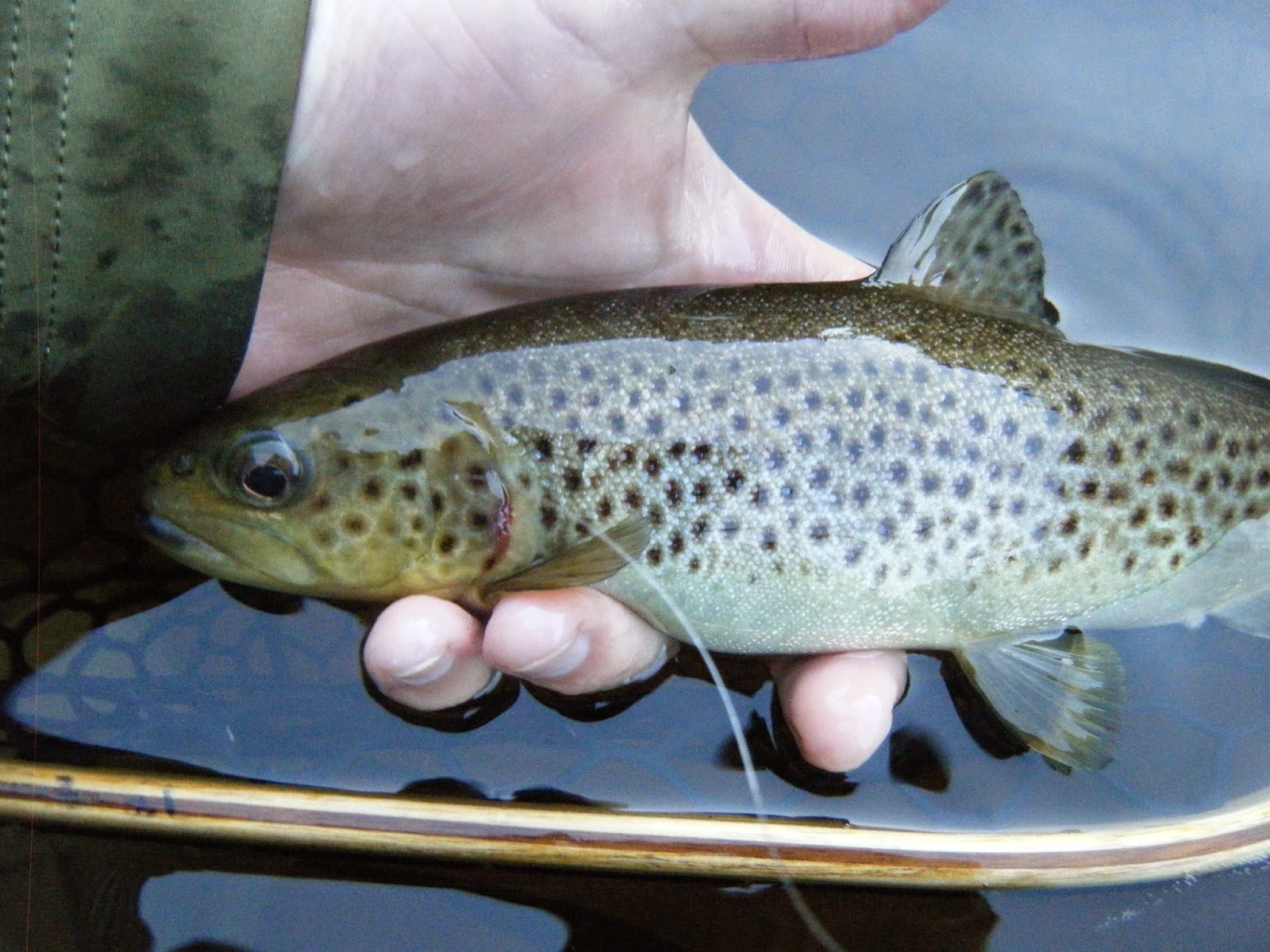 Enjoy the Labor Day weekend !
Posted by MarkW at 7:51 AM 4 comments:

An Afternoon, an evening, and a morning

Yesterday afternoon was cool and overcast so I headed up to the Farmington River to see if the olives would be out and fish looking up.  I started off the afternoon fishing a yellow stimulator with a bead head pheasant tail as a dropper.  In the first run a nice rainbow took the dropper.  Unfortunately, I had left my net at home but I manged to bring the rainbow to hand and remove the PT with little trouble.  As I continued to work my way downstream I picked up a pretty wild brown on the stimulator.  The brown was more of a handful as most wild fish are.  It just wouldn't hold still long enough for me to remove the hook. 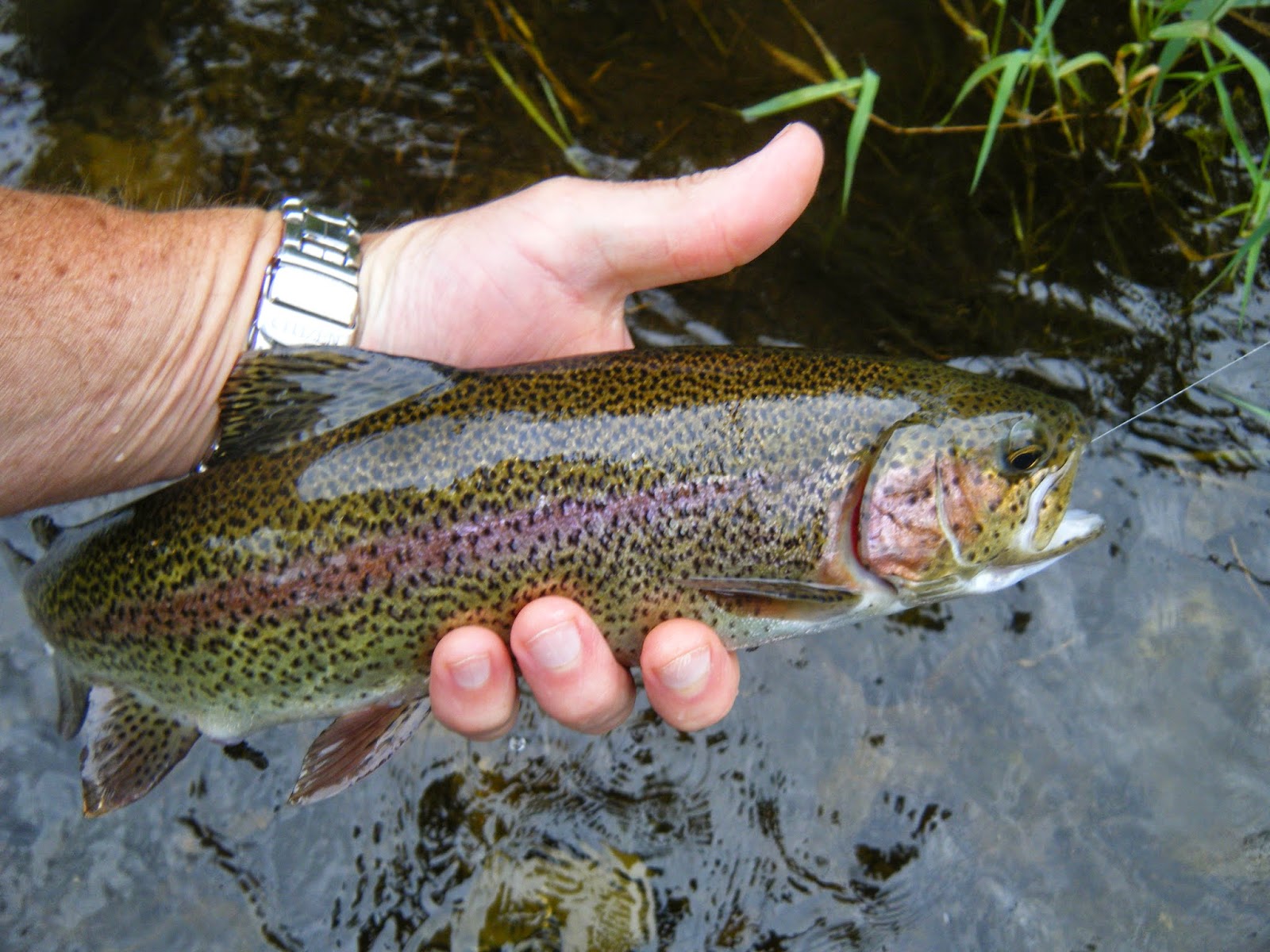 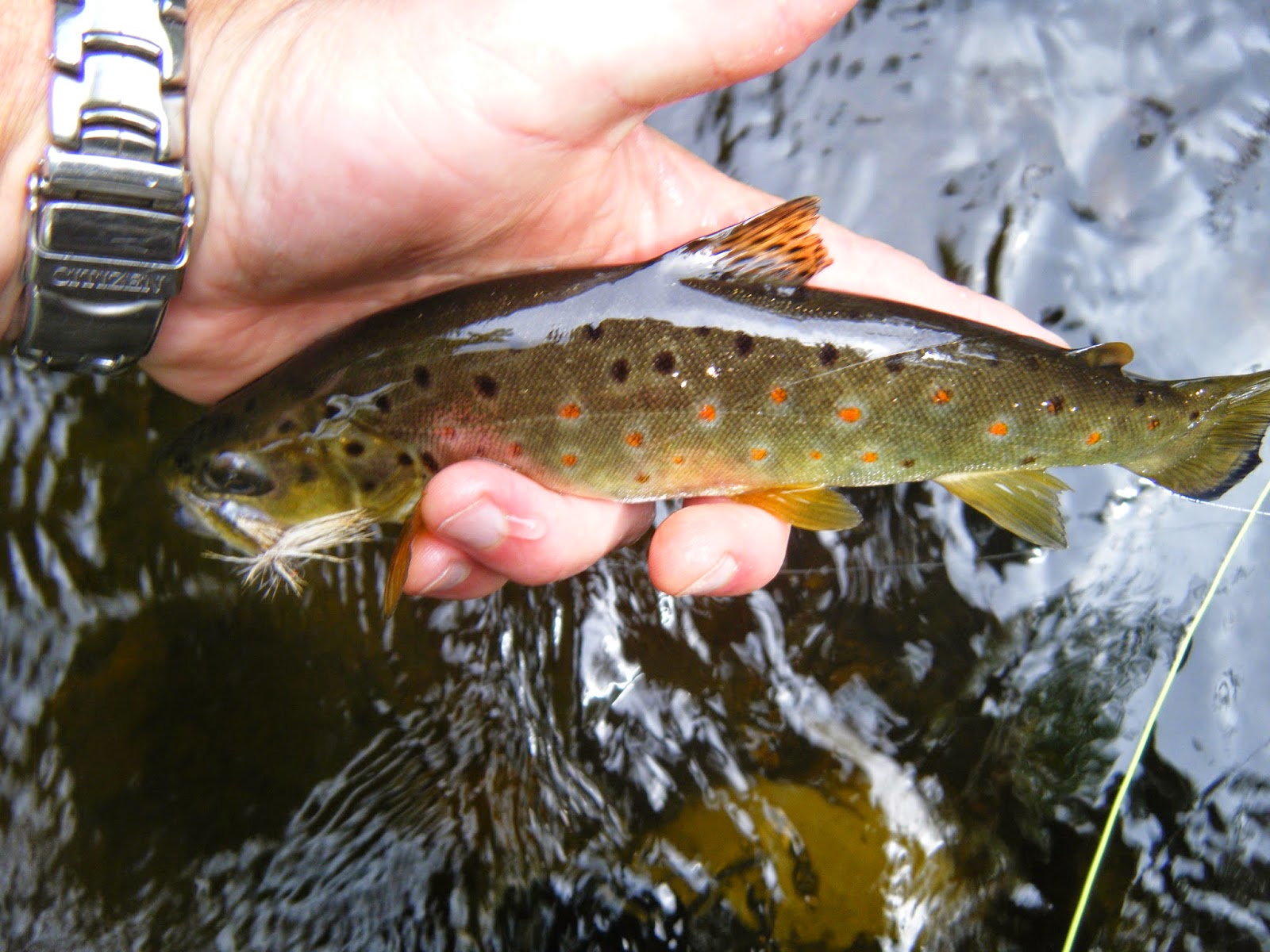 As the day turned to evening, I headed up river to see if I could find any fish taking olives.  To my surprise there were very few fish rising.  I did mange to fool one brown on a small sulfur comparadun with a snowshoe rabbit wing around dark but that was it.

This morning I decided to get up early see if there would be a  trico spinner fall.  I was up on the river about 6:30am but  there wasn't a lot of activity.  I did manage to fool a wild brown on a #22 trico spinner and another wild brown on #20 rusty spinner before calling it quits. 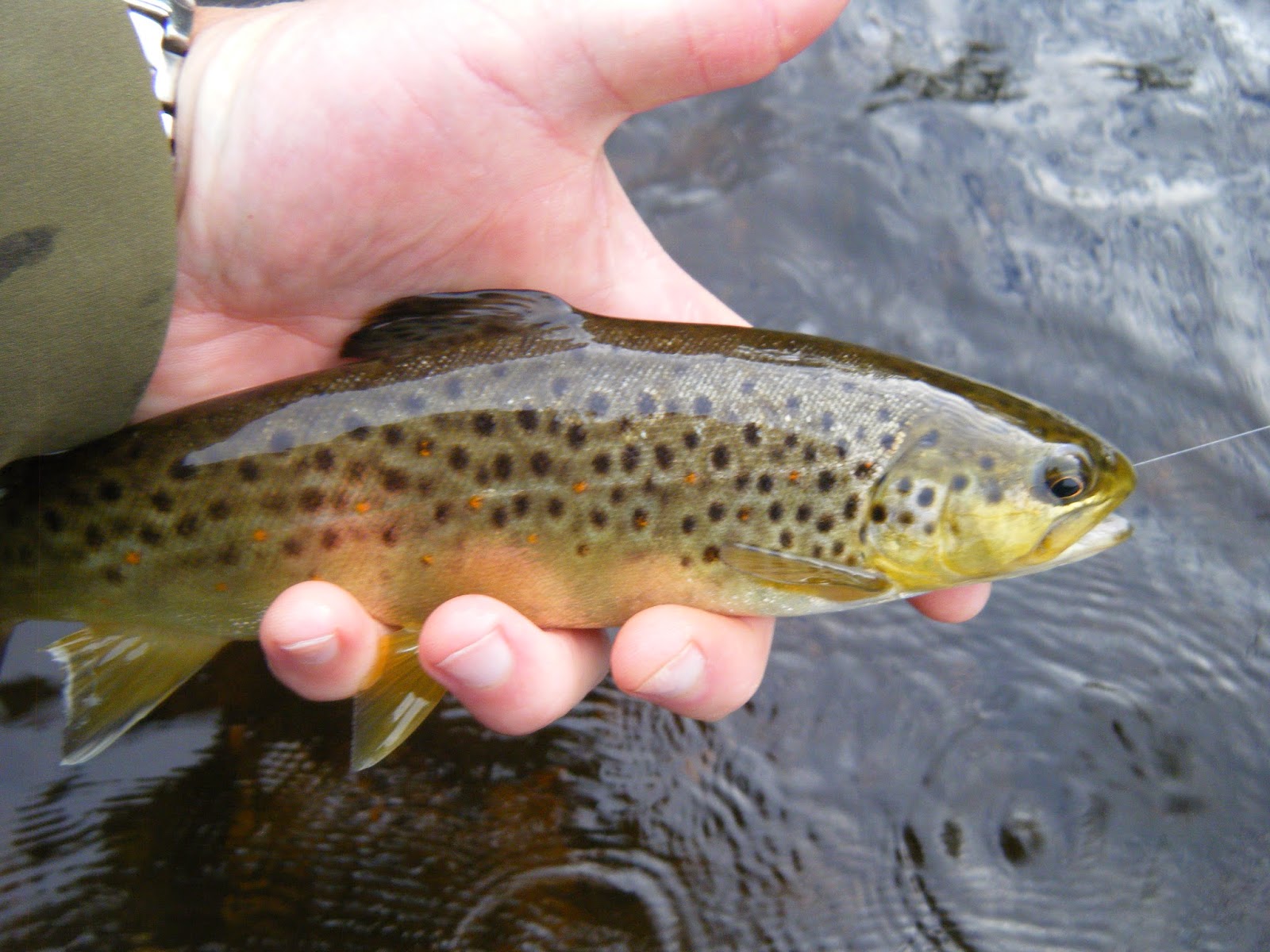 Just got back from traveling last week so I just wanted to relax a little and tie a few simple wet flies.  So I sat down with some Pearsall's primrose yellow silk, some TMC 100 #18 hooks, muskrat fur, and some light dun hen hackle and in no time I had a handful of olive flymphs waiting for my next encounter with fish sipping olives.
Posted by MarkW at 7:54 PM 6 comments:

Lately, fishing has been slow.  I did go out a couple times last week but had minimal returns for the effort, hooking a handfull  nymphing various spots on the Farmington river but for some reason most of them managed to release themselves!

So with the cooler dry weather yesterday, I had hopes for a better day.  There really wasn't much going on early afternoon.  Again the nymphing was unproductive so about mid afternoon I decided to head upriver to some pocket water and fish a stimulator with bead head pheasant tail soft hackle tied off the back.  It was a ton of fun watching a couple big rainbows and a nice brown crush the stimulator in the riffles or come up and nail the pheasant tail and drag the stimulator under with authority.  I really like fishing this type of rig because the fish are attracted to the larger fly and even if they aren't interested in it, the dropper is just sitting there begging to be eaten. I've watched fish follow the stimulator for a little and then turn on the dropper at the last minute.

The afternoon was made even more pleasant when a pair ospreys began calling to each other high in a tall pine tree.  One would cruise down the river and then return to the other.  I couldn't tell if it was an adult returning to young or a mate but it was fun to watch and listen to.  It's too bad I only had my small waterproof camera with me.  It does a decent job close up but the osprey in flight was too high to get a decent shot so I just enjoyed watching them rather than fiddling with the camera..

As the afternoon shadows began to lengthen, I headed to a spot that I thought I had a good chance to find some rising fish.  Sure enough, as the temperature dropped the fish started rising to something small.  There were a lot of olives on the water so I decided to give the olive flymphs I recently tied a trial run. I picked up two solid fish that crushed the flymph as it was drifting in the film and then when straight to the bottom and played tug of war.  I got both within a leader length but never got a look at either before the hook pulled out.  After I lost the second fish, I took a look at the fly and sure enough the hook was bent open.  I guess the mustad R50 dry fly hook I tied these on wasn't beefy enough so I will tie some more on some TMC-100 hooks which are a little sturdier.  With a little more modification, I think I'll have a decent fly when small olives are on the menu.

Right about dark the fish were rising more steadily to sulfurs or more likely sulfur spinners.  I managed to land a couple browns in the fading light on a sulfur comparadun.  When I broke a third fish off, I called it night as it was too dark to see well enough to tie on another fly.  It was good to get out and catch some on dries. 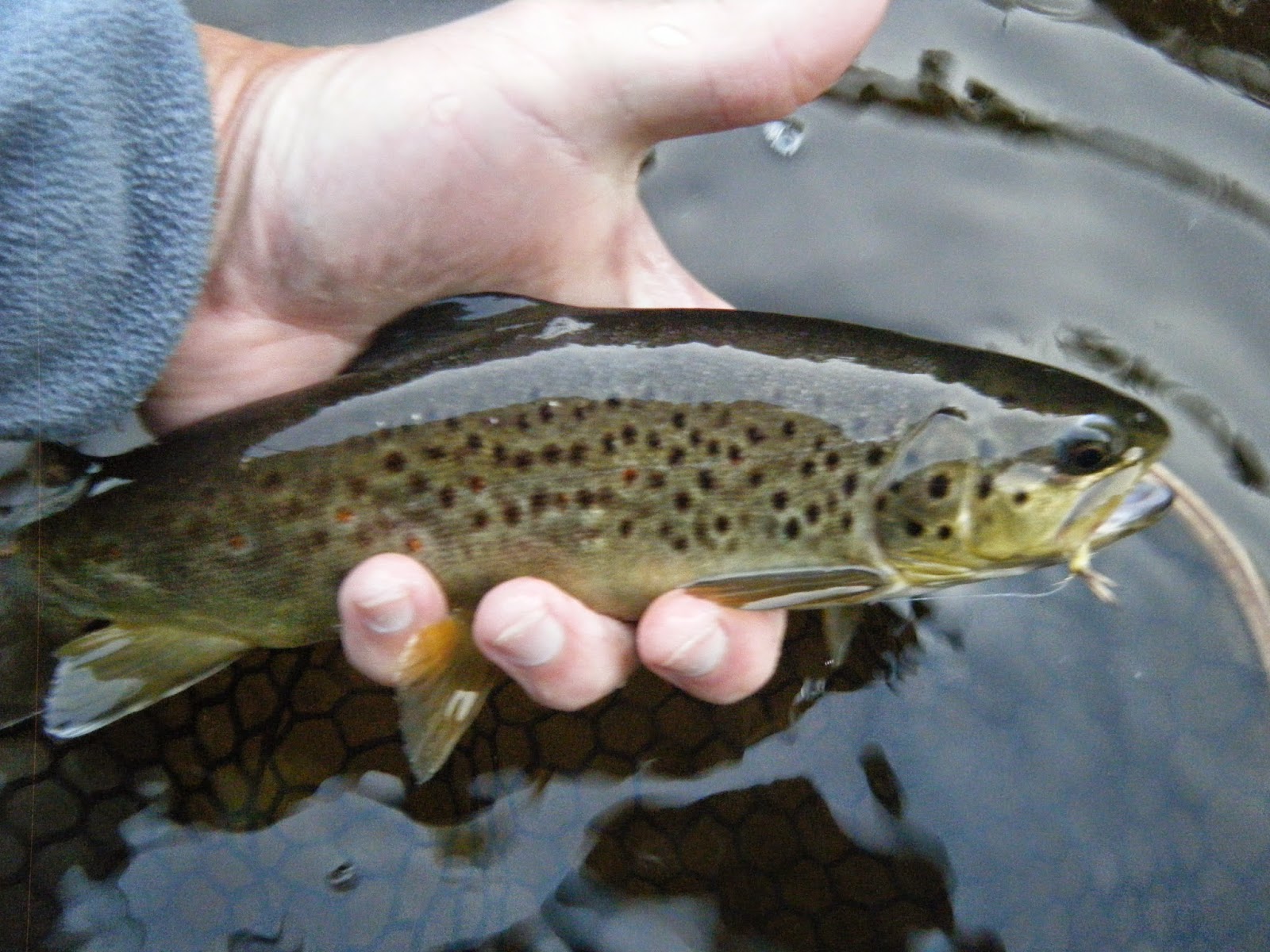 Some wet flies to try

Just a quick tying post.  I recently read Dave Hughes article is Flyfishing and Tying Journal entitled "Evening rise and the wet fly".  Being a fan of wets, I decided to tie a few and try them out.  I was particularly interested in Hughes' approach to using the March Brown flymph when fish are taking rusty spinners since it can be challenging to fish small rusty spinners in low light.

Here are the march brown (rusty spinners) and winged hare's ear (caddis) that Hughes describes.  I used brown squirrel dubbing on the march brown to give it a more rust colored body.  The bodies on these flies are dubbed with a dubbing loop to provide for a rough body and to allow the thread and dubbing to work together when wet to give the desired color.