Fishing ahead of the blood moon

Yesterday afternoon I headed north to do some early fall fishing and take some pictures of the moon during the lunar eclipse.  Last night was a coincidence of a super moon and a blood moon when the moon comes closest to earth and is eclipsed by its shadow.

I started off nymphing a nice run and took a couple of browns.  These were mostly holder trout that have been the river a while and some were showing some nice color.

After noticing some consistent surface activity in the tail of the pool, I headed downstream to see what was going on.  The subtle rises looked like the sort of rises you see when fish are taking small olive emergers so I tied on a #20 olive parachute and started to target the rises that were somewhat regular.  The fish consistently took the parachute most of the afternoon and the fly I was using seem to get more effective the more worn it became.  At one point the parachute post had taken so much abuse that I needed to change flies.  The new fly wasn’t nearly as convincing but once it had a taken a couple trout it fished well.  I found that fishing it slightly downstream was move effective and a fair number of fish took it on the slow swing at the end of the drift.  Maybe next time I should fish a small olive wet!

As evening approached the yellow quills (Leucrocuta hebe) were starting to appear.  I watched carefully as the fish started to clear the surface either chasing rising nypmhs or trying to catch the spinners that were hovering a few inches above the surface.  A #18 olive/yellow parachute took a handful of fish including one that cleared the water and then took the parachute on the way down!  However, I think a small wet fly might have been more effective than fishing dries.  As the light faded the rise forms changed again becoming more subtle and less aggressive which led me to think the fish were taking spinners.  An olive/yellow spinner was pretty much ignored so I switch to a #20 rusty spinner and took the last trout of the evening.  It’s been a while since I’ve experienced several hours of consistent dry fly action and the pleasant weather and surroundings made for a wonderful Sunday afternoon outdoors.

As I finished packing up my gear back at the car, I could see the glow of the moon over the surrounding hills so I pulled out my camera and began scouting for a nice location to get some shots of the moon.  It was really amazing the watch the earth’s shadow travel over the face of the moon and then to see the moon turn red as the partial eclipse progressed. 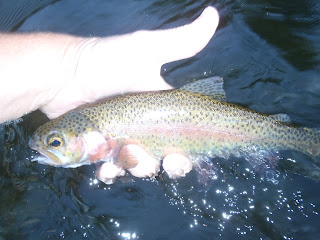 With the warm, dry weather we've had here in Southern New England, I've kept away from the small streams.   I've been looking back at my log book and remembered the excellent fall fishing last year and hoping that this year is another good year.  With thoughts of fall I headed out for a late afternoon scouting trip to see if things were starting to pick up.

I started out nymphing and found a couple browns and rainbows interested in both large and small pheasant tail variations (12/18).   I continued nymphing until I started to see some isonychia coming off around me.

I did see a couple snouts breaking the surface in some riffles nearby, so I picked up the dry fly rod and managed one brown and missed another nice brown as I caught a glimpse of his golden flank and the hook failed to hold. 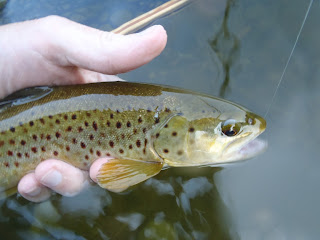 There was more activity as the afternoon light faded into darkness but in the failing light I wasn't able to figure out what they fish were rising to.  Even though it's still early to expect the fish to be in full fall mode, it was a pleasant afternoon to be out in the fresh air enjoying a mid September afternoon.

The last days of summer

Shorter days, hot, dry, dusty days giving way to golden orange sunsets, astors, golden rod, touches of red and yellow on the mountains, these are the sign posts that summer is coming to an end.


The last days of summer often take small mountain brooks down to their very bones.  Once vibrant streams falling out of the mountains crashing over every rock and boulder in their way are now reduced boulder fields and an endless series of tiny little puddles perfectly reflecting the forest and sky with unbroken calm. 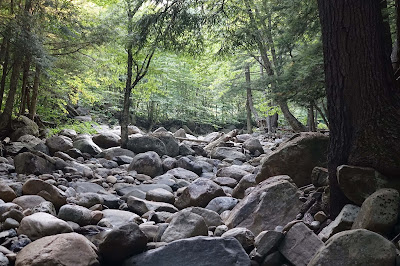 Somehow  the brook trout find a tiny pocket here or there to survive this yearly cycle.  The fall rains will eventually come, and then the spawn but for now there is the waiting. 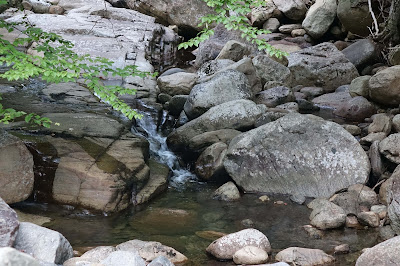 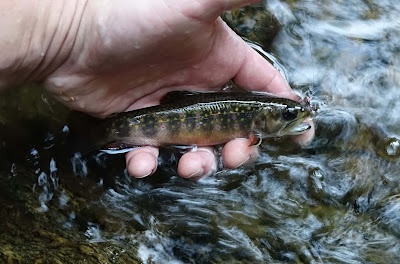